In his new book, actor Mickey Rowe, ’11, chronicles his journey from a legally blind self-described outcast to the hero of his own story. 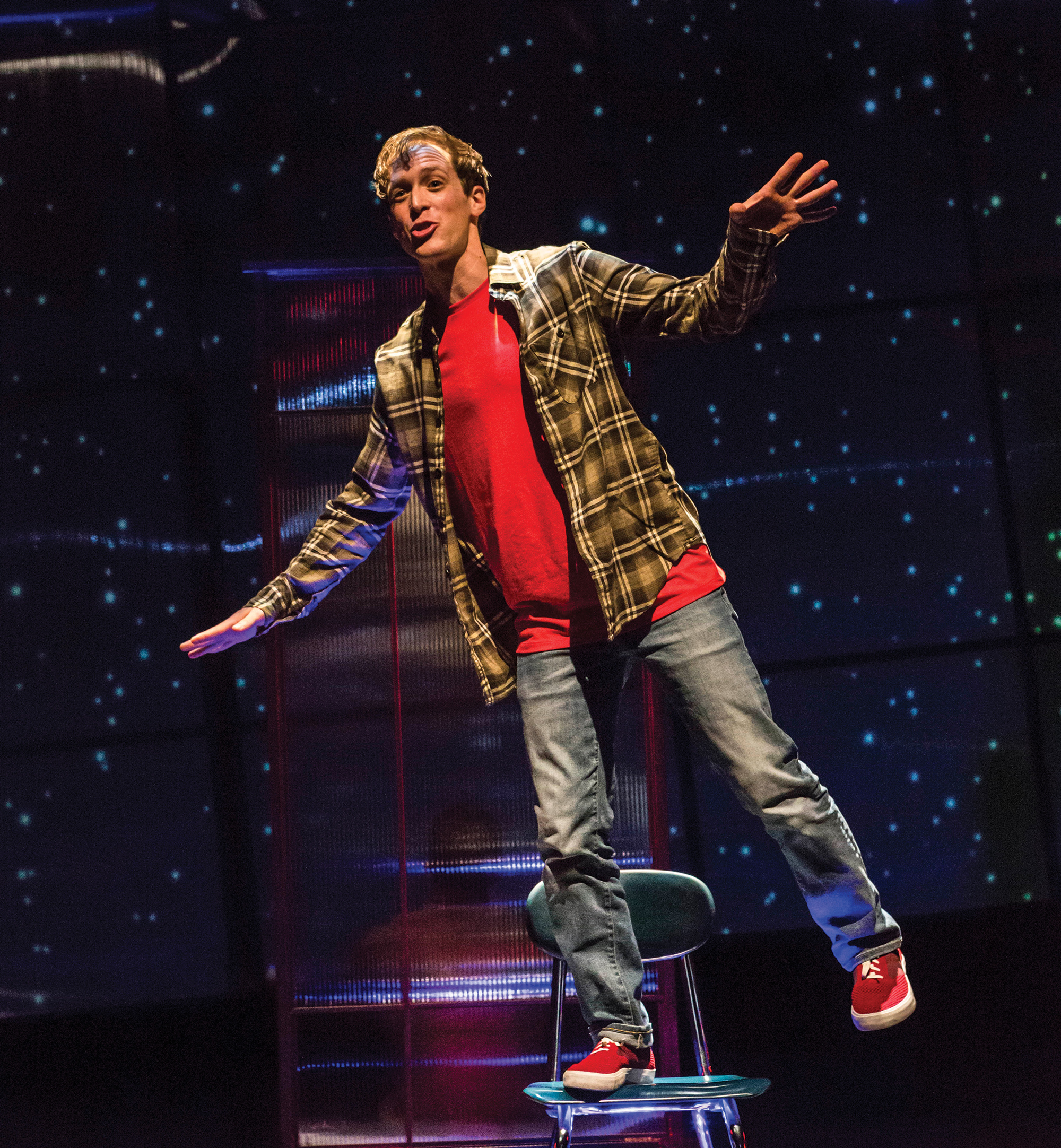 College was a chaotic and confusing time for young Mickey Rowe. The University of Washington drama major had not yet received his autism diagnosis, and he was never sure how to navigate the social aspects of life on a lively campus with an endlessly renewing supply of sensory input.

Over time he found a way to regulate himself during overwhelming experiences: He’d put on headphones, plug into an audiobook and walk. The UW’s beautiful architecture and tree-lined pathways offered the perfect setting as he listened to a book about theater or became absorbed in the latest thriller.

“Also, I think UW in many ways at times can feel like a very giant school and at times it can also feel really small as well, which I really appreciated,” Rowe says. “So I felt like when I needed to just disappear, I could go on those long walks with my audiobook and feel like I was completely anonymous and like the entire world just vanished, and I just disappeared into this giant school, which felt really, really nice to be able to disappear like that sometimes.

“And yet I also knew that at any time, whenever I wanted, I could walk into the drama school lounge and have this completely different experience in this really small department where everyone knew each other and everyone was friends with each other and where I knew I could just walk right in, pop on the couch and there would be so many people there excited to see me.”

Rowe, ’11, appears at Town Hall Seattle in March with the release of his book, “Fearlessly Different: An Autistic Actor’s Journey to Broadway’s Biggest Stage.” Timed to land between the Disability Day of Mourning on March 1 and Autism Awareness Month in April, the Rowman & Littlefield release is both an autobiography and a manual on how to treat one another with kindness and understanding. Rowe wrote the book outlining his journey from a legally blind self-described outcast who felt spurned in a variety of ways to the hero of his own story of perseverance and resilience hoping others would take inspiration.

He’s excited to find that the University has recognized the need for a wide range of support for students like him who have different ways of learning and being.

“Fearlessly Different” is the story of Rowe’s pursuit of a role in the stage version of “The Curious Incident of the Dog in the Night-Time.” The best-selling novel centers around Christopher, an autistic teen who’s solving a mystery of who killed a neighborhood dog, a story that turns out to be intensely personal.

Rowe fell heartbreakingly short of earning the role with the Broadway touring company following extensive auditions in New York City, but he finally realized his dream of playing Christopher in 2017 with the Indiana Repertory Theater and Syracuse Stage. He may be the first autistic person to play the role. His efforts and performance were covered by The New York Times.

It’s just one of several success stories in “Fearlessly Different” as Rowe overcomes a number of obstacles due to misperceptions about autism and his abilities. He navigates a childhood made more difficult by a resentful mother and unprepared teachers as well as an adolescence dominated by a lack of real human connection. Later he faces inequities in the arts world.

Completing the two-year process of publishing a book extends the list of Rowe’s successes. His most recent success was recording an audio version of the book.

“I just finished recording the audiobook last night,” Rowe says. “(It) was really quite an awesome experience. Especially for someone who’s legally blind. I was really, really worried about the recording process because I was going to have to just read the whole book out loud start to finish, which is a really difficult thing for me.” The recording studio installed a big TV monitor, making the script really big. “And we’re really, really proud of the results,” says Rowe.

In some ways, Rowe says, his many successes started with his diagnosis of autism spectrum disorder at the UW Medicine Adult Autism Clinic. “This was the first time I had heard those words directly in connection with myself,” Rowe writes in “Fearlessly Different.” “I felt a huge sense of relief!” He likens it to the time when he was 6 and he first tried on his glasses. “The diagnosis was a lens that finally brought my whole confusing life into focus.”

When Rowe arrived on campus more than a decade ago, he found both resources and understanding. Now he’s excited to find that the University has recognized the need for a wide range of support for students like him who have different ways of learning and being.

“I definitely wrote the book with college-aged me in mind, thinking about what I needed,” Rowe says. “Especially now, this generation that’s currently in college, who is on TikTok, they have really expanded the disability movement along with the autism acceptance movement in huge strides that I would have never imagined possible 10 years ago when I was at UW. And so, with this generation, I’m so excited for them to get their hands on this book.”