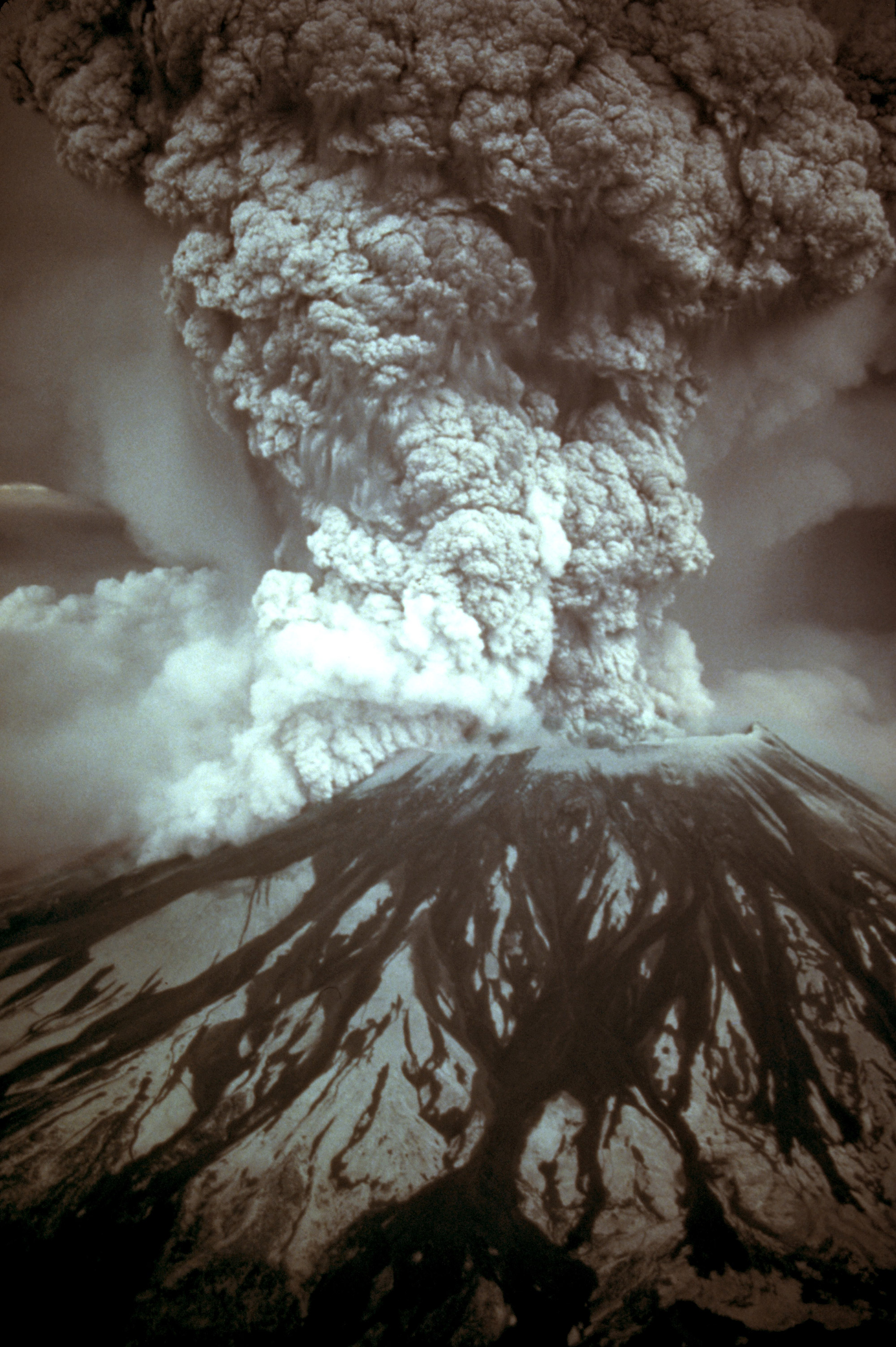 Schools closed after the May 18, 1980,
eruption of Mount St. Helens, and
seniors never got to say goodbye.

Just as all schools and colleges have closed down this year from late March because of COVID-19, my senior year at R.A. Long High School in Longview also ended several weeks early. After the May 18, 1980, eruption of Mount St. Helens 35 miles away, our classes were canceled for the remaining three weeks of school. (Remember, we didn’t have computers or videos to use in those days.) Juniors, sophomores and freshmen had to return to school, but we did not. We seniors simply graduated in June.

“My disappointment was in missing the last three weeks of our senior year,” says my great, smart friend Dan Little, ’84, whom I went to school with from kindergarten all the way to the UW. “I’ve been reminded of this now as high school and college students are missing many months and the end of their experiences due to COVID-19. I was looking forward to the senior sneak but all we did was sit in our houses and look outside at grayness.”

In Bill Speidel’s fun book “The Wet Side of the Mountains,” which was published in 1974, he wrote that Mount St. Helens was predicted to be one of the volcanoes that was most likely to erupt in our country. He was right.

Then 18 years old, I was asleep on Sunday, May 18, when the eruption occurred around 8:30 a.m. After I woke up, I turned on the TV and saw news coverage of the eruption on several channels. I was stunned by it all. My parents, Verle and Jeannette, also had us drive across the Columbia River (which is right on the southern edge of Longview) to a nearby hillside along U.S. 30, where we could see St. Helens, including the ash rising about 15 miles into the sky. It was devastating. 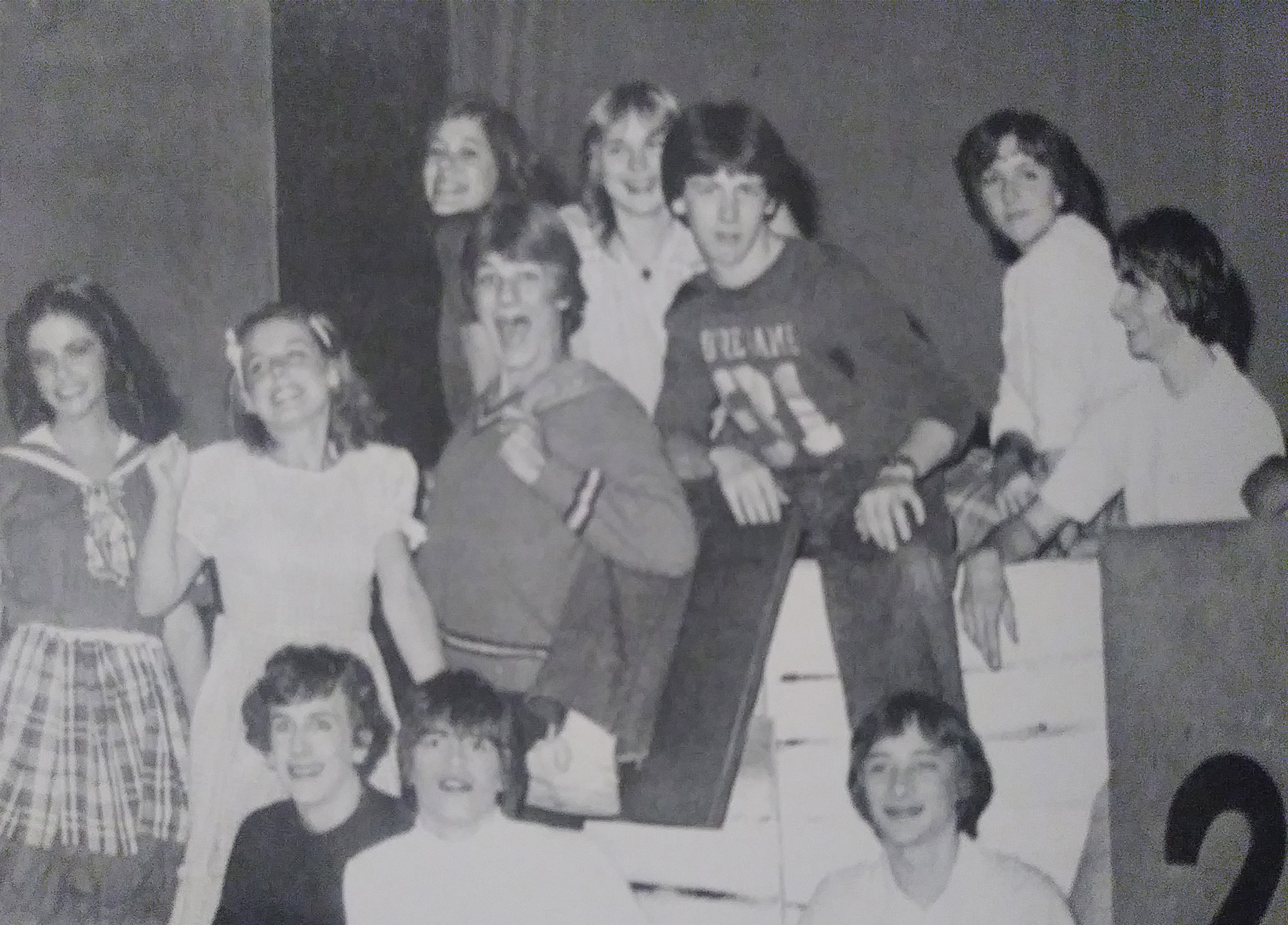 The author, second to the left in the bottom row, with classmates in the production of “You’re a Good Man, Charlie Brown.”

My other great R.A. Long and UW colleague and friend, Chuck Sheaffer, ’86, recalls that he was supposed to climb St. Helens that weekend. “I remember being a little concerned about the early season snow conditions, and then of course the climb became the least of my concerns,” he says. “In the days after the eruption, I remember riding my bike up the road to Cascade Junior High to see President Carter when he visited evacuees who were sheltering there.’’

Indeed, a few days after that major eruption, President Carter visited the area and flew in a helicopter near St. Helens. It was “the worst thing I have ever seen,” he said.

Yes, it was awful. The eruption, including a 5.1 earthquake and a resulting landslide, caused the top of the mountain to fall from a height of 9,677 feet to 8,330 feet. Worse, 57 people were killed, including the owner of the Mount St. Helens Lodge on Spirit Lake, Harry R. Truman. Many bridges and parts of surrounding highways also were ruined. The Cowlitz River, which goes between Longview and Kelso before entering the Columbia, also was filled with mudflow. Most of the ash on May 18 fell to the east, including states as far away as Oklahoma (though not much ash that far away). 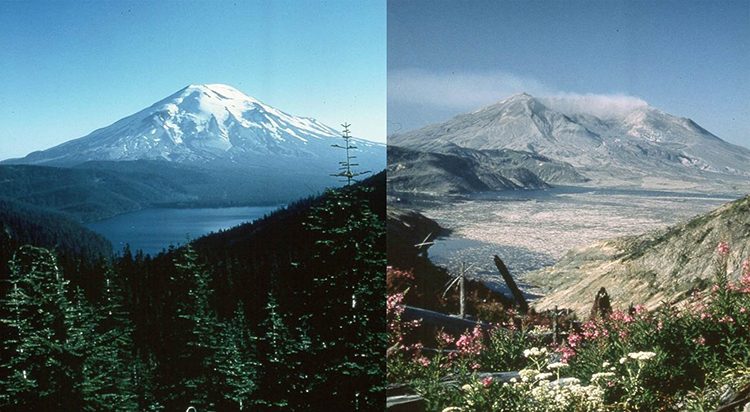 Mount St. Helens before and after the eruption. USGS photo.

Chuck, a great athlete, recalls running some workouts inside our high school to avoid the falling ash from St. Helens after another eruption. After even another eruption, mountain ash fell on Longview, though I don’t recall it being as much as the 4-5 inches that dropped on Yakima and Spokane. My chore was to sweep it away from our driveway and remove it from the lawn.

“That’s when a lot of things suddenly felt real,” Chuck says. “The loss of life and property, the transformation of the landscape, the significance of what would have been our final weeks of high school.”

Despite the fact that our classes were canceled, our R.A. Long graduation was held in June in the school gym. There, I gave one of the commencement speeches and mentioned the St. Helens eruption, saying “No one in their right mind would have predicted such a turn of events and it all happened in that span of two weeks.” Yet more eruptions were to come.

A few months later, in late September, Dan, Chuck and I started our freshman year at the UW, all of us living in McMahon Hall (Chuck and I shared a room there before we moved to the 5030 House in 1981). We still paid close attention to what was happening on St. Helens, which had a few more minor eruptions that autumn quarter. Fortunately, they weren’t anywhere near as disastrous as on May 18.

As a longtime sportswriter for ESPN and several major newspapers, Jim Caple, ’97, experienced some pretty major events in his life. He was in Candlestick Park to cover the first game of the 1989 World Series when the 7.1 Loma Prieta earthquake struck. He also had his wedding on the coldest day in Minnesota history. But not many events rank with living 35 miles away from Mount St. Helens on May 18, 1980. He is a frequent contributor to University of Washington Magazine.