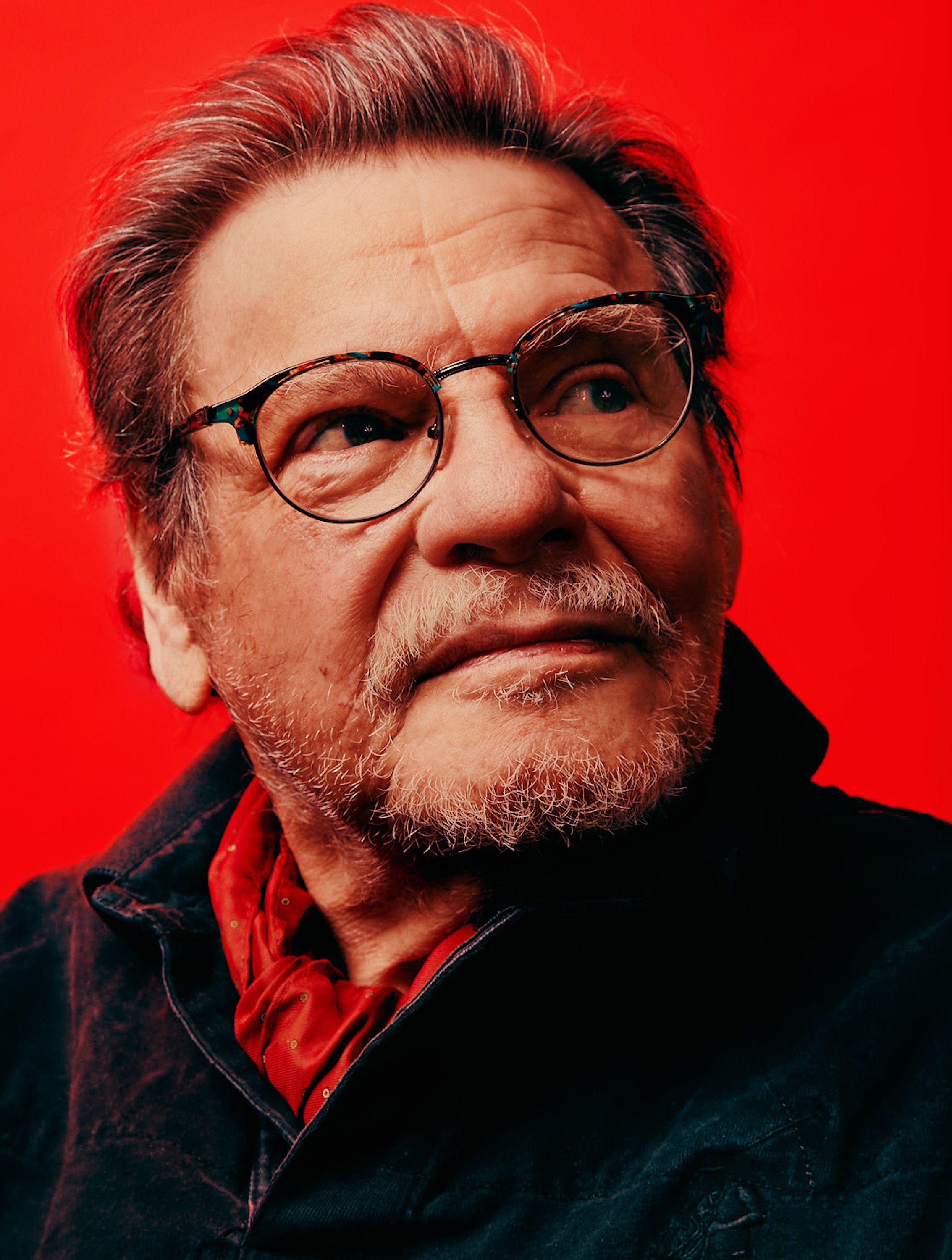 Alfredo Arreguin has painted the official portraits for three justices on the Washington State Supreme Court. At 86, the master of Mexican-American art remains a source of colorful ideas and vivid canvases.

We are living in a historic era for public art, when the images that form our unconscious notions of who we are as a nation are beginning to topple. Around the country, statues whose implicit purpose was to promote racial superiority are being removed and recontextualized. Here in Washington state, the Legislature recently voted to remove its 1950s-era statue of Marcus Whitman from Statuary Hall at the U.S. Capitol. The imaginary depiction (no portraits of Whitman exist) helped promote a heroic legacy for a missionary whose story was warped and embellished to suit the prejudices of the times. The Washington legislators hope to replace it with a statue of the Nisqually tribal leader Billy Frank Jr. His fight for treaty rights and efforts to protect the environment are well documented.

As we correct the misinformation and omissions of history and seek true and fair images to replace old stereotypes, the Washington state Supreme Court has taken on the issue in its own Temple of Justice. During the past decade, the court has commissioned prominent Mexican American artist Alfredo Arreguin, ’67, ’69, to paint portraits of justices of color, beginning with the late Charles Z. Smith, ’55, the first African American to serve on the court. More recently, Arreguin completed portraits of the distinguished Justice Mary Yu—the first Latina, first Chinese American and first openly gay justice—as well as groundbreaking Chief Justice Steven González, the first person of color to serve in that position. Arreguin’s intricate, brightly colored paintings help balance the previous lineup of dark-suited white males. But it turns out those early portraits still have some diversity secrets of their own to reveal.

This story begins in 2011, when Justice González was showing his family around his new workplace at the Washington state Supreme Court. His 7-year-old son, looking at the somber portraits of past justices that lined the hallway, surprised him with a question: “Why doesn’t anybody look like us?” Justice González acknowledged the problem—and vowed to correct it.

He phoned his friend Arreguin, an internationally recognized artist whose work hangs in the National Portrait Gallery and the Smithsonian American Art Museum. And he asked a favor: Would Arreguin be willing to paint a portrait of Smith, González’s mentor and the first person of color and first African American to serve on Washington state’s Supreme Court? González couldn’t promise there would be money to pay for the commission, but he assured Arreguin that Justice Smith was a wonderful person and outstanding judge who deserved to be commemorated.

Arreguin agreed, but hesitantly. He had seen the formal poses and dark colors of the other portraits hanging in the Temple of Justice and told González: “Mine is not going to look like that. Those are like classical music, and mine is more like jazz.”

“Yours will be Cumbia,” González quipped, referring to the exuberant Latin American dance rhythm. That’s exactly what he wanted. 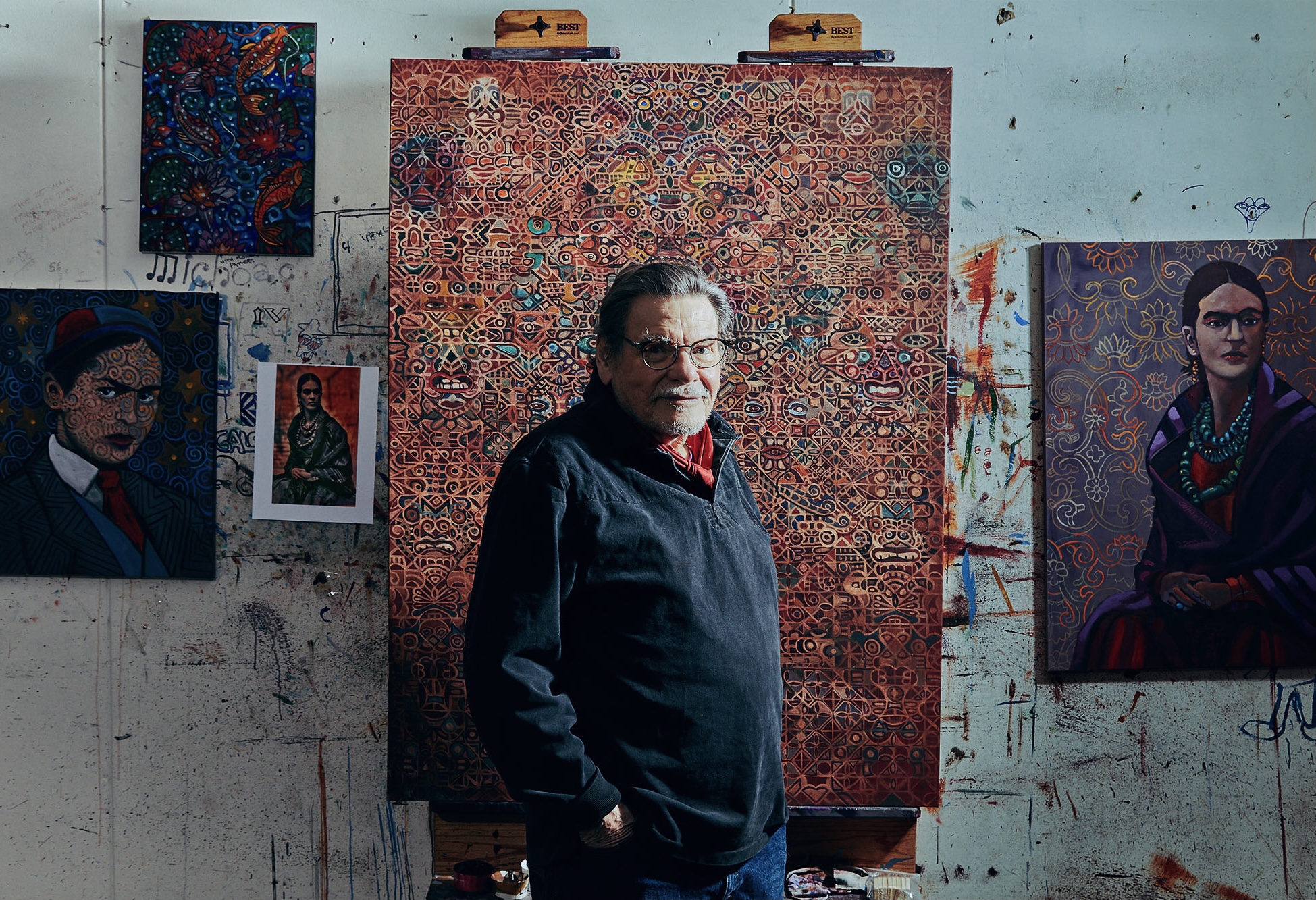 Alfredo Arreguin in his basement home studio in Seattle, photographed by Quinn Russell Brown on June 23, 2021.

Arreguin doesn’t think of himself as a portrait artist per se: the people in his paintings usually serve as symbols of traits he admires. In order to depict a living subject, someone with a distinct character and attributes, he needed to find a new strategy. The solution Arreguin chose was simple: “I make them my accomplice.” When he prepared to paint Smith, “I went to the judge and I said we are going to do this painting together, so I want you to tell me all the things that happened in your life, what is meaningful to you. And he sent me a letter, and I used that all in the painting.”

Later, when it came time for Arreguin to paint Yu, the process was not as easy. “I was not a willing participant,” Yu said. “Portraits: those things are done when you die or maybe when you retire. But to have a portrait by such a wonderful artist is really humbling, and I wasn’t really thrilled that Justice González had proceeded with this. I was very annoyed with him, in fact.”

So, Yu made a condition: When Arreguin arranged for a photographer to take a picture of her, she insisted that González have his photograph taken, too. Later, she and the other members of the court agreed it was time that his portrait should be painted as well.

Currently, Arreguin’s portraits hang in parts of the Temple of Justice that are accessible only to members of the court and staff. But González has requested permission to have them installed downstairs in the law library, which is generally open to the public, subject to COVID-19 regulations. This leads us back to the question González’s son put to him. The chief justice says he feels strongly that what’s depicted in Arreguin’s portraits is much greater than the individuals.

“It’s very important to me and important for kids of color to see themselves represented,” he said. “I also want white kids and adults to see that we are part of this history and presence here as well. I think the archetype of what a judge looks like needs to change, and that changes with imagery and with art and with us being comfortable with diversity and difference.” 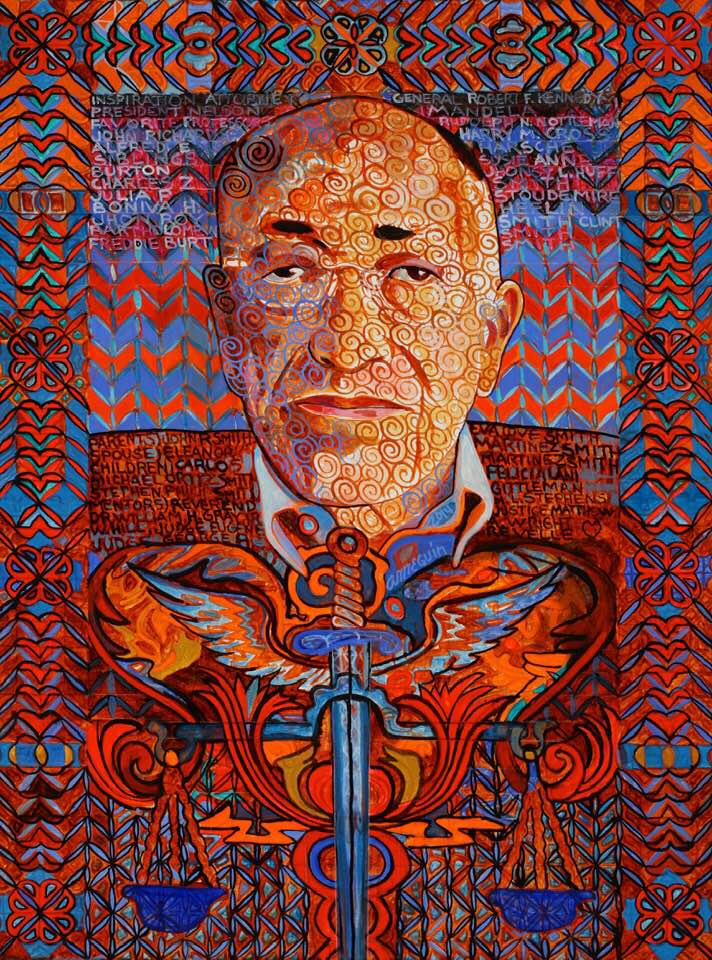 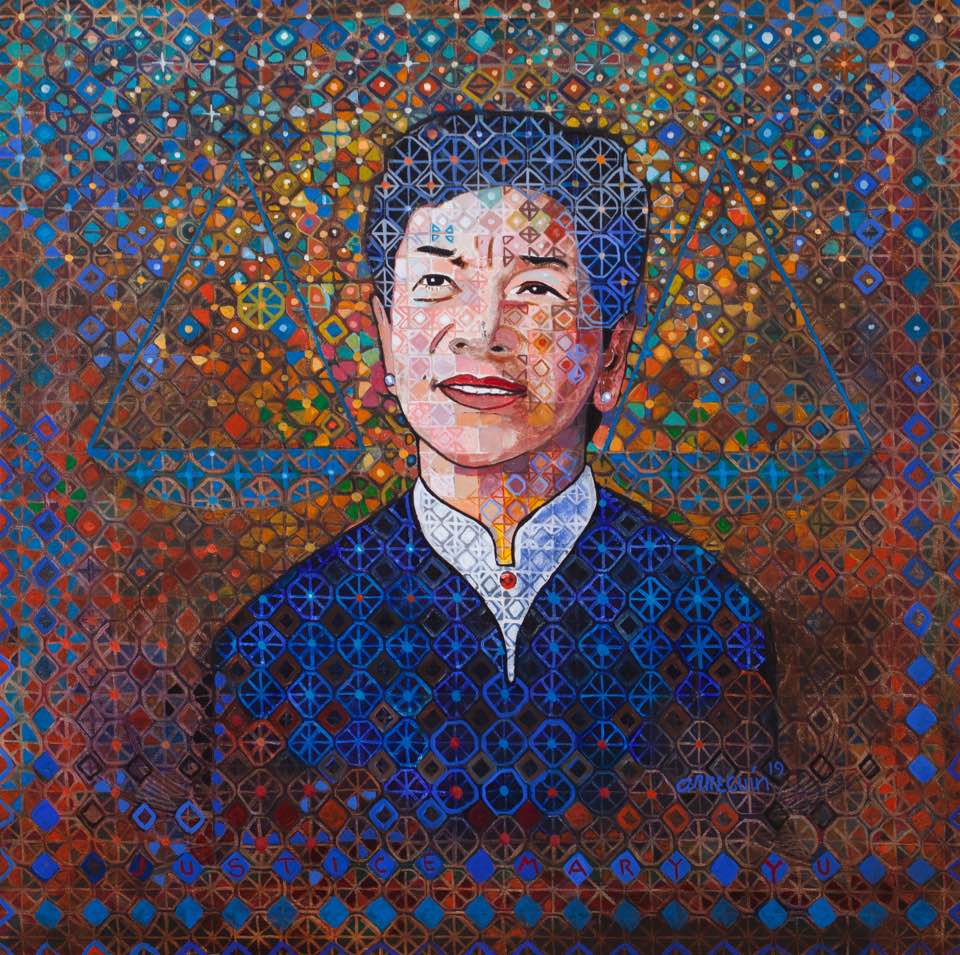 “Many places with the rule of law like ours in the Supreme Court still don’t have the spread of diversity that we have. So that is truly extraordinary.”

In that respect, the Washington state Supreme Court stands as an example. After all, with seven female and two male justices of multiple racial and cultural backgrounds, our court is the most diverse in the country.

“In the country, yes,” Yu affirmed, “but some have also said [we have the most diverse court] in the world, and I believe that. … Many places with the rule of law like ours in the Supreme Court still don’t have the spread of diversity that we have. So that is truly extraordinary.”

Still, as Yu points out, not all justices who have served on the court have painted portraits, and there is no system for how they are chosen. The court does commission photographs of each justice and that is where Yu sees change happening. “I look forward to the day when there are more people of color who retire and whose black-and-white picture goes up with the hundred others who have come before us; and that people can see the progressive change, how it went from male to female and people of color. I think that’s going to be such a powerful statement …”

True enough. But what about all those old painted portraits lining the hallways at the Temple of Justice, of the white men—and they were all men—who served on the court in its earlier days? What should we make of them? How were they acquired? I wanted to know who painted those pictures and who maintains them. Are they owned by the state and part of our public art collection? (Most are hanging in areas of the building that are not open to the public.) 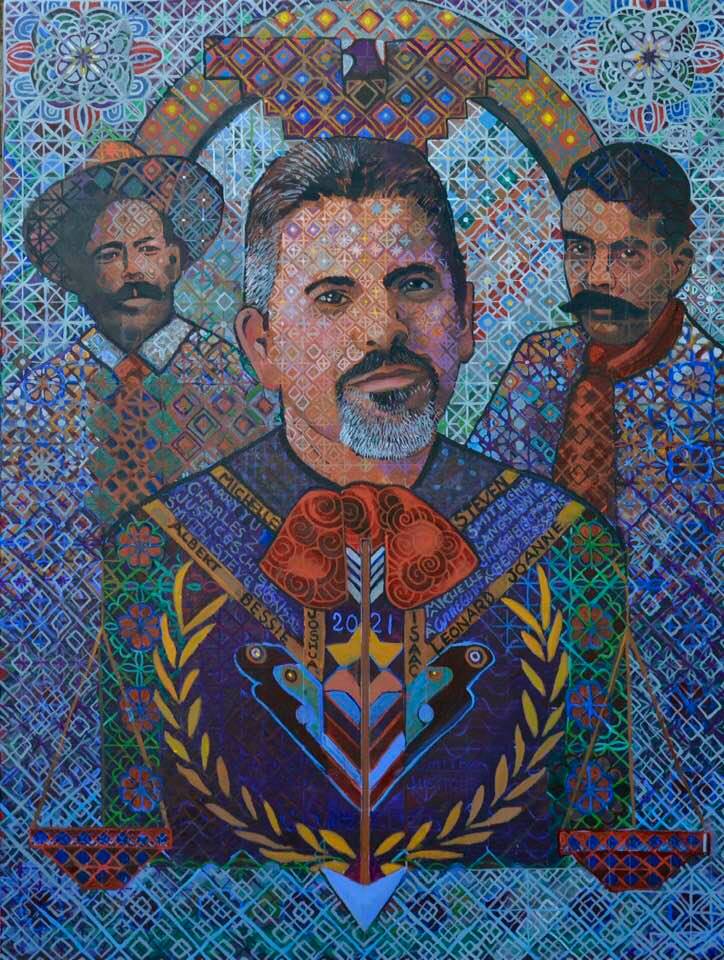 It didn’t take long to find out that nobody at the offices of the court, or the law library housed there, or even the longest serving still-living justice, had any idea how the paintings got there or when. Nor could the Washington State Arts Commission help. The judicial branch is its own domain and the artworks at the Temple of Justice are not part of the State collection; they belong to the court.

Eventually, I was referred to a researcher at the State Archives, who managed to find some information. And what Ben Helle discovered wasn’t listed in official documents or correspondence or some obscure piece of legislation.

No: Helle turned to the newspapers. He located a 1915 article in the Seattle Daily Times that detailed the commission of the first three portraits acquired by the court, two of which now hang in a reception area outside the Chief Justice’s office. We now know that the Washington State Bar Association commissioned those portraits—of Ralph O. Dunbar, who served from 1889 to 1912 and was the first chief justice; Thomas Anders, from 1889-1905; and James Reavis, 1897 to 1905. Perhaps more importantly, we also now know that the paintings deserve to be recognized not only for the justices they depict, but also for the artist who painted them. Ella Shepard Bush (1863-1948), who had an art studio on Third Avenue in Seattle, was a rarity at the time: a single woman who worked as a professional artist. 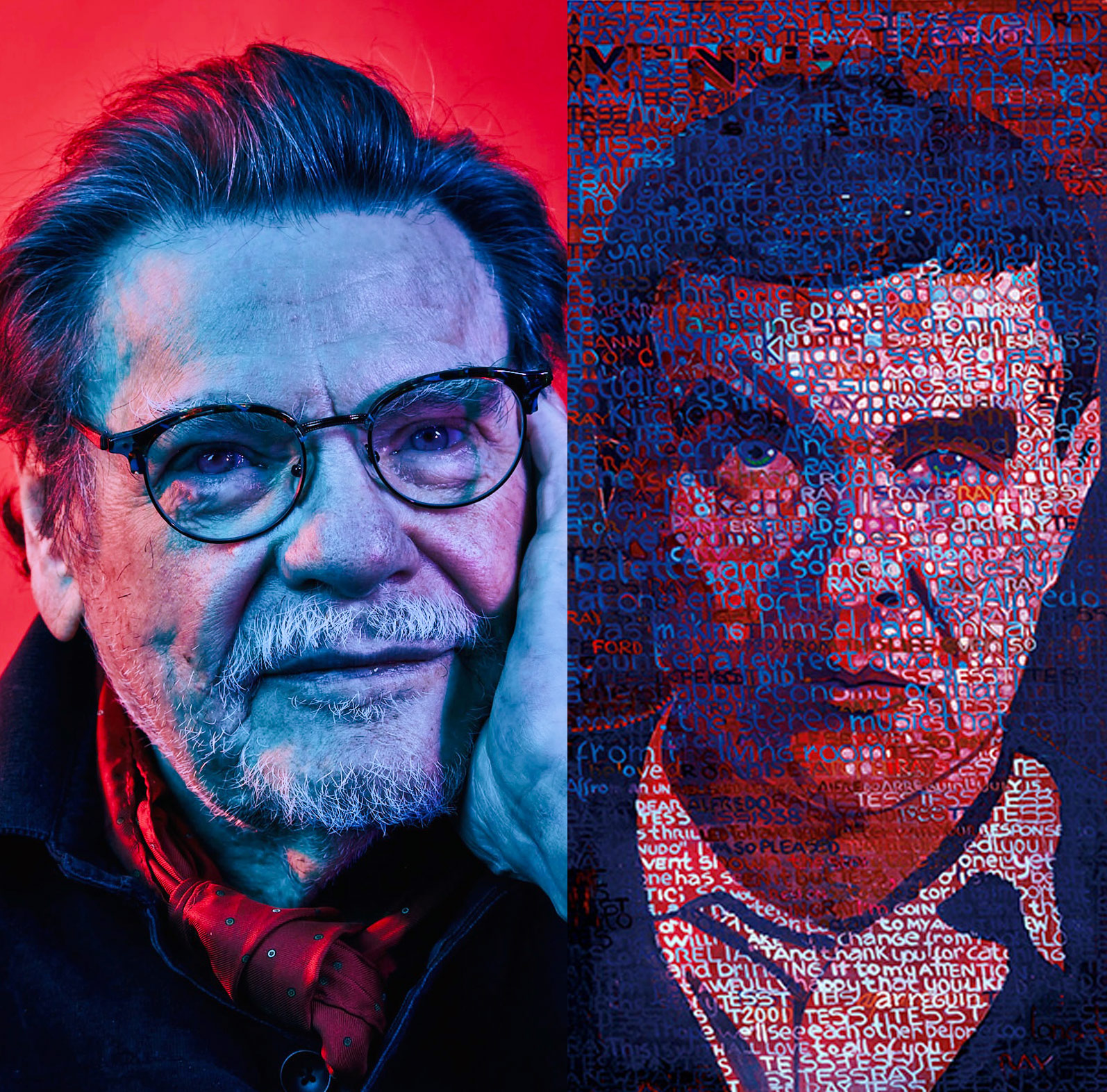 Left: Alfredo Arreguin photographed on the back deck of his Seattle home. Right: “Mi Amigo Ray,” Arreguin’s portrait of Raymond Carver, one of the most acclaimed American short story writers of the 20th century. Carver’s story “Menudo” found inspiration from Arreguin and partially takes place in Arreguin’s kitchen, where the narrator is comforted by the warm touch of Alfredo. “He put his big painter’s hand on my shoulder,” the narrator says, lamenting several pages later that he fell out of touch with his painter friend. Today, 33 years after Carver’s death, Arreguin often tells stories about his friend Ray.

Born in Illinois, she trained at the Corcoran Gallery of Art in Washington, D.C., before entering the Arts Students League in New York, where she studied portraiture, considered a respectable art form for women at the time. In 1887 Bush moved to Seattle and opened her studio, where she taught private students, among them the artist Roi Partridge (1888-1984, husband of renowned photographer Imogen Cunningham) and the author and UW professor Morgan Padelford (1875-1942).

With a little more digging, and help from my friend David Martin, curator of the Cascadia Art Museum and a specialist in early Northwest artists, I learned that other portraits at the Temple of Justice also represent the work of noteworthy and diverse Seattle painters. Like Bush, these artists exhibited their work nationally and were trained at esteemed academies in the U.S. and abroad. At least two were immigrants (from Hungary and Italy) and one was a prominent Seattle woman painter, Jeanie Walter Walkinshaw (1885-1976), wife of a lawyer and mother of the late Seattle attorney, Walter Walkinshaw. (Then as now, it didn’t hurt to have connections!)

It’s an interesting twist to this story about diversity that Bush’s name, as the artist, is not acknowledged at the Temple of Justice. González says that will change. He plans to have plaques created that show the artist’s name as well. The Temple of Justice will soon be closing for renovation. When it reopens, visitors will be offered more complete information about any paintings in public areas.

I find it ironic, too, that no information about the artists was recorded in documents at the state archives or the bar association, or in the law library at the Temple of Justice, but is known to us today because of a story in the daily newspaper. It’s a good argument for the old adage that newspapers are the first draft of history. And with newspaper staffs shrinking and papers dying off, it’s another reason to worry about where researchers of the future will turn for information.

Sheila Farr is an author and arts writer. She served as the visual art critic for the Seattle Tmes from 2000 until 2009.