She is the first woman, first Latina and the first in a long while to be promoted from within to lead the University of Washington.

When she was appointed interim president of the UW last spring, Ana Mari Cauce wasted no time adjusting to the role.

She opened a UW resource center in Spokane, presided over the graduations of more than 7,000 students on three campuses and launched a collaborative degree with a major Chinese university. She also started a university-wide initiative on race and equity, helped first-year students move on to campus, shot hoops in Red Square with the men’s basketball coach, oh, and landed the job of president.

Cauce now oversees a $6.4 billion budget, 54,000 students, one of the nation’s leading medical programs, the law school and, in her words, “the big, messy, hairy, complex work we do together in the service of others, in pursuit of our public mission.” The 10-member Board of Regents named Cauce interim president in March, following Michael Young’s departure. But she was no stranger to Gerberding Hall, having served as provost, the second highest position in the UW administration with responsibility for the faculty and the budget for the past four years. The appointment came in the middle of the legislative session, in the middle of spring quarter and there was no time to get her bearings.

She wondered how the faculty and staff would accept her, as well as the alumni, regional leaders and donors. And she wondered how she would manage the many different parts a president must play: host, fundraiser, ambassador, legislative liaison. “As I started to really get into those roles, I found that my history here made me more effective,” says Cauce, who joined the UW faculty nearly 30 years ago. “And in many ways, it’s not that different than teaching. I get to help people see this university through my eyes.” 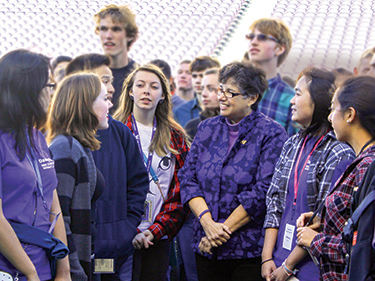 Cauce’s own story starts in Cuba, where her father Vicente Cauce was minister of education under dictator Fulgencio Batista. Her parents fled the country in 1959, when Fidel Castro’s army took control, leaving Cauce, not yet three, and her five-year-old brother with family until they could join them a few months later. They traded a life of privilege in Havana for one of poverty in Miami where her parents labored in a shoe factory and made their home in a neighborhood near Little Havana.

Though the Cauces lacked money, they placed great store in education. Without question, both children were destined for college. As a little girl, Cauce would line up her toys and teach them. In high school, Cauce worked as a cashier while juggling a few extracurriculars. “I was a yearbook editor and a newspaper editor. I was a geek before it was chic,” she says. Her brother transferred from community college to Duke University, and Cauce enrolled at the University of Miami so she could continue to live at home.

Drawn by storytelling and social justice, journalism was her first love. “It was Woodward and Bernstein—journalism can save the world,” she says. But then she found a better fit in psychology. “I really liked interacting with people,” she says. “It was more meaningful when I did it in a helping context.”

Her parents weren’t pleased when she moved north for graduate school at Yale. “They would have much preferred I stay home,” she says. But her route led her to Edmund W. Gordon, one of the nation’s leading scholars in psychology and African American studies. Gordon, himself, was mentored by sociologist and activist W.E.B. Du Bois.

The Yale professor emeritus describes Cauce as hardworking and known for her kindness and candor. “She has her share of confidence and ego,” says Gordon. “But they are consistently expressed through the demands and expectations she holds of herself in the service of community and other human beings.”

She is arguably the finest student he has had the privilege to teach in his 60-year academic career, says Gordon. “Even in those early days Ana Mari was asking the hard-to-answer questions, and insisting on more than superficial and simplistic answers,” he says.

In 1979, while she was in graduate school, Cauce’s brother, César, a union organizer and civil rights activist, was one of five people killed at an anti-Ku Klux Klan Rally in Greensboro, N.C. His death will always be hard to talk about, she says. “But the moment came last spring when I thought it was important to share.” She told the story during a speech to students to introduce the UW’s Race and Equity Initiative, a project that is personally important to her.

Her brother’s death caused her to question her direction: Should she continue in an academic career or follow his lead into activism? “It ended up that the path that I was on was the right one for me and my personality,” she says. “I realized it was the best way for me to play a positive role in the world.” 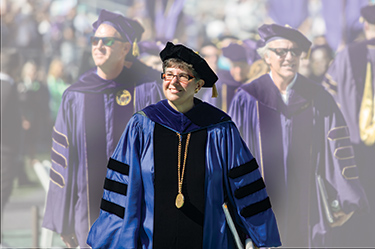 Cauce came to Seattle in 1986, after graduating from Yale and working briefly at the University of Delaware, with the idea that the Northwest would be a good place to start her career, stay for four or five years, and then “head back east where I belong.” But “the fit was right,” she says. She discovered an affinity for hiking and bird watching. By the time she was awarded tenure in 1990—and bought a house not too far from campus—she knew this was home.

While her primary research focus is on adolescents, particularly ethnic minorities and at-risk youth, she has fashioned a career as a beloved teacher and mentor. “She simply offered every opportunity, stood beside me, and trusted that I would meet the challenge,” says Nancy Gonzales, ’92, associate dean of faculty and professor of psychology at Arizona State University. As one of Cauce’s graduate students, Gonzales once landed a spot on a conference panel with two distinguished scholars. She was feeling relieved that the questions to her, the rookie, had been fairly easy. “Yet just before the session ended, one final hand was raised with the most difficult question,” she says. It was Cauce and “it was directed at me.”

In 1997, Cauce was tapped to chair American Ethnic Studies at a difficult time for the department. Students even held a sit-in to protest her appointment. This was her first big challenge as a leader, but she won the trust of the faculty and students, and with their help, stabilized the department. She held a series of leadership positions, but becoming dean of Arts and Sciences, which encompasses more than 35 departments from American Ethnic Studies to Statistics, prepared her best for the significant work ahead as provost and now president.

Over the summer, a 28-member search committee considered 58 applicants and prospects. Of them, 17 were presidents and nine were provosts. But Cauce was the unanimous choice, said Regent Chair Bill Ayer, ’78, because of her record of performance, her extraordinary intelligence, her work ethic and her love for and deep belief in the University.

“Sometimes you cast the widest net, only to find the perfect answer standing right next to you,” said Regent Kristianne Gates Blake, ’75. On the October afternoon the regents announced their decision to a room packed with students, faculty and staff, everyone in the room sprang to their feet. “It means so much more to be in a room with people who know me,” said Cauce, after a lengthy ovation. “There are people here who knew me when I was a beansprout.” Then she paused, realizing she was getting ahead of herself. “Subject to negotiation, I have every intention of accepting.” The room erupted with laughter.

Cauce barely had time to open letters of congratulations before boarding a plane to Washington, D.C., to visit the Washington delegation. A week later, she was off to China for a UW innovation summit. She has already started vetting the University’s administrative and finance practices, she is building relationships with business partners, and she is intent on keeping the University’s efforts to improve diversity moving forward. “It’s actually the smart thing to do,” says Cauce, explaining that in addition to preparing students for the world, diversity makes conversations on campus richer and the University stronger.

She may have a lot to do, but Cauce plans to continue teaching. “I became interim president in the midst of teaching a freshman seminar on leadership,” she says. The year before, she taught a class on stress and coping, “useful subjects for a university president.”

Cauce was recently asked: Now that she’s president, what is it that she has been waiting to do? She smiled and replied: “I haven’t been waiting for anything.”