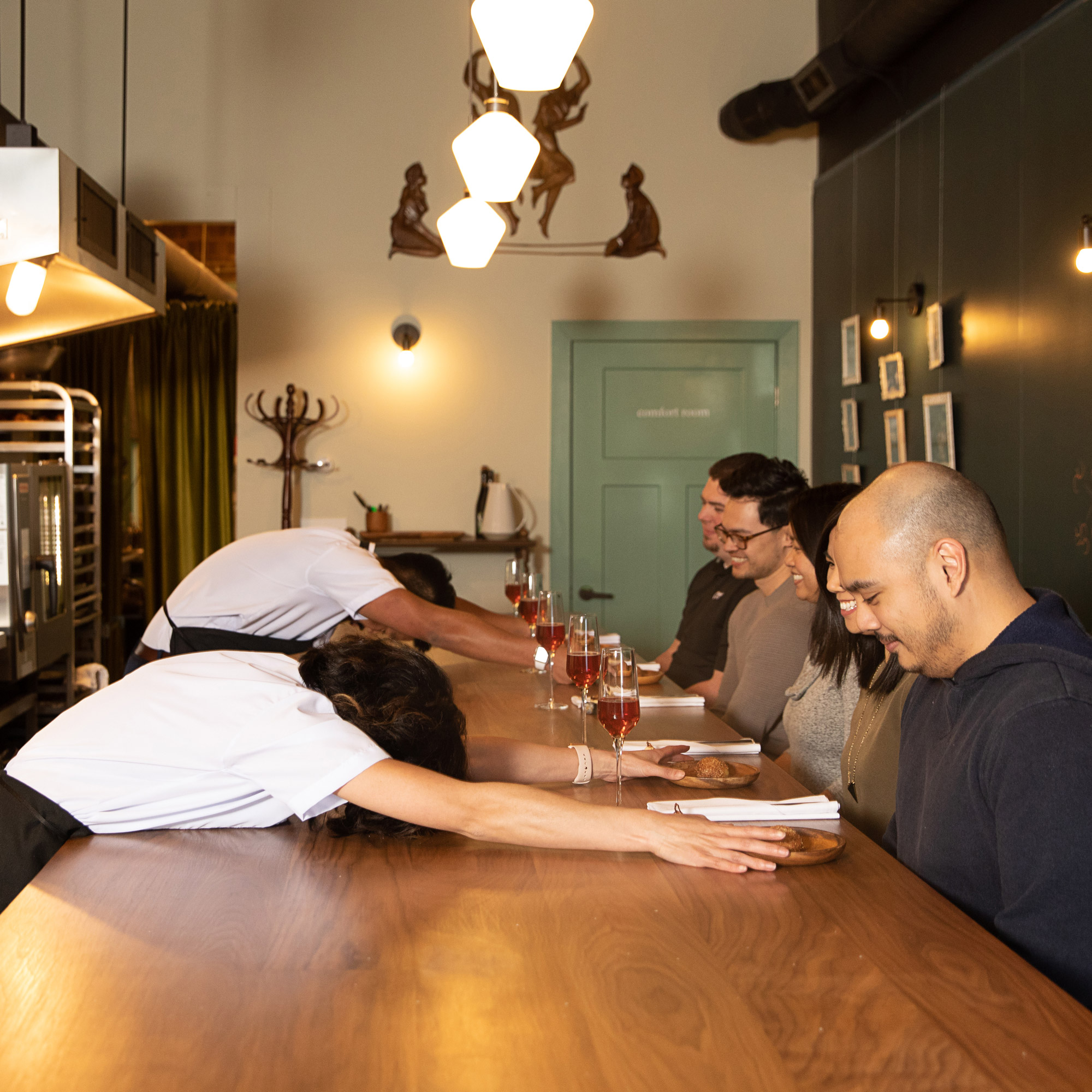 This story, featured in our September 2019 issue, is accompanied online by our Filipino Food Guide, which shows you where to find a wide variety of Filipino food in the Seattle area.

Of all the ingredients in the 10-course tasting menu at Archipelago, “Orosa sauce” might sum up the spirit of the restaurant best.

Restaurant owners Aaron Verzosa and Amber Manuguid alter details with the seasons, but Orosa sauce is fundamentally a ketchup made with sweet, starchy elements, maybe caramelized summer squash in July and pumpkin puree in October. The condiment was inspired by the banana ketchup invented decades back by Maria Orosa, a Philippines-born food technologist.

A dish like ribeye steak with Orosa sauce isn’t just a savory indulgence in the open kitchen. As it’s whisked the short distance from Verzosa’s burners to the communal counter, the plate becomes an avenue for discussing colonization, recipes, the “pensionados” education system, even prisoners of war.

“A lot of (Orosa’s) ethos was about how we can sustain ourselves … how can you use what’s around you? She came up with many preservation techniques which are absolute pillars in Filipino cuisine to this day,” Verzosa says.

“It’s not the sauce that’s important, it’s her story.”

Storytelling is the heart of the married couple’s Hillman City restaurant, a fine-dining experiment that weaves a culinary tapestry of Filipino culture through Northwest ingredients. Since opening last year, the eight-seat eatery has drawn critical raves. 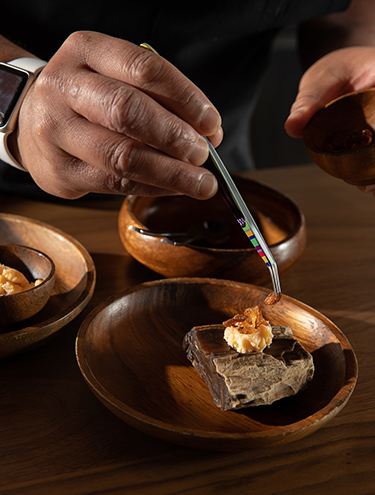 The accolades are sparked partly by Verzosa’s refined cooking and Manuguid’s thoughtful design. But they also stem from the personal journey the UW alumni present, talking about history and family through the universal language of dinner.

“I feel very strongly if I have certain gifts, I should use them to help out my family, my culture, my community,” Manuguid says. “What’s really exciting about Archipelago is, it’s finally at a point where we can take our actual professions and contribute a little bit more directly.”

Their journey from classroom to kitchen seems unlikely at first glance—but, on a deeper look, it is almost predestined.  “Identity, culture and empowerment are the three things for Archipelago. It speaks a lot to our time at UW,” Verzosa says.

The Northwest natives, both second-generation Filipino Americans, pursued studies far from the culinary world. Verzosa was a linguistics major who planned a career in global health. Manuguid, a user-experience designer, studied digital arts and experimental media with an emphasis in animation and video.

They met in Tagalog class, which filled a language requirement and much more, allowing them new access to their culture. Later classes and travels to the Philippines further anchored their identities.

“I grew up in a predominately white high school” in Vancouver,  Wash., Verzosa says. “I realized pretty quickly in Filipino history with (Professor) Vincente Rafael that the history I learned in high school was completely whitewashed. What was important to realize and learn at UW was researching, and being able to dig deeper. The idea of perspective.”

Manuguid, who was raised in a larger Filipino community in Silverdale, found her turning point in a Filipino-American studies class with Professor Rick Bonus. She started focusing on representation in her own films and animation, using only Filipino characters as a counterbalance to their overall absence in the media and Hollywood. “As a student you’re not going to make a dent,” she says, “but I felt it was important.”

After graduation, Verzosa signed up for what he thought would be a brief quarter in culinary school before medical school, learning practical skills to help relate to the communities he would ultimately serve.

“Aaron always loved food. Loved, loved, loved food,” Manuguid says. “Even before he was a cook, in college he could go through our empty fridge, get packs of … this and that and make something wonderful.”

As Verzosa studied cooking and picked up restaurant work, something else essential clicked. “There was something tactile about it, describing something, understanding the history and culture behind what you were making. It was like this industry [is one that] every industry passed through: art, science, health, well-being,” he says. 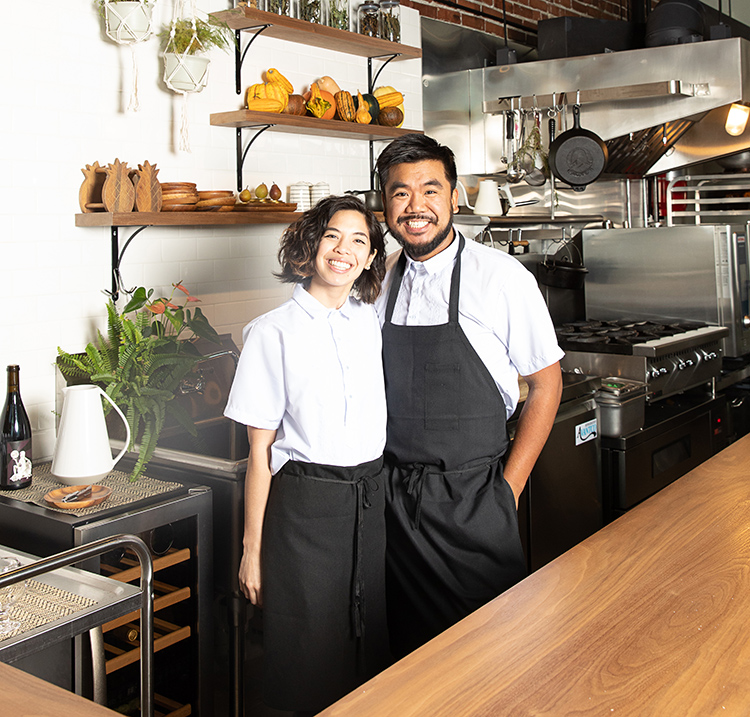 Restaurateurs Amber Manuguid and Aaron Verzosa have cooked up a culinary journey based on their Filipino and Northwest histories and culture.

Working at Spanish-based Harvest Vine and its sister restaurant, Txori, helped Verzosa learn to work within a cuisine’s tight geographic boundaries. Then he spent years at Modernist Cuisine’s cutting-edge cooking laboratory in Bellevue, where he crossed borders and cooked for the most elite celebrities of the restaurant world.

“I got to see how what I was doing in the science field applied to the food side.  … I could go across the hall and talk to a chemist, or I could talk to a biochemist or bioengineer, and it felt like I was back at UW at one of the health sciences buildings and I was just going into someone else’s lab.”

Between jobs and with a healthy plate of community volunteering, their schedules sounded full. But they also reached out to help create ILAW (a Tagalog word meaning “a source of light”), a thriving coalition of Filipino food and beverage professionals in the Northwest, strengthening the cuisine’s place in Seattle.

Leaving the security of Verzosa’s day job to open their own restaurant last spring was a gamble. The industry is notoriously difficult, and even seasoned restaurateurs with financial cushions fail. But they shared an idealism, work ethic and well of creativity. They had something to contribute.

“Again, the thought process probably developed at UW,” says Verzosa. “Where are the connections? What’s missing? How can we develop that conversation and fill some of those gaps?”

Manuguid’s work in user experience design gave them an edge over many restaurant planners. “My whole career is around how do I best communicate and make this really easy for people?” she asks.

“Some people say this isn’t Filipino food because it’s fine dining. But in traveling, [you see] such a wide spectrum.”

They designed the restaurant with an open kitchen for easy communication between owners and guests. Framed wall photos capture the couple’s own childhoods, and architectural touches bring the Philippines to mind. A mural includes Northwest signatures like ferns and salmonberries.

It challenges preconceptions from the start.

“Some people say this isn’t Filipino food because it’s fine dining. But in traveling, [you see] such a wide spectrum,” Verzosa says. Defining any cuisine gets complex fast. Filipino dishes can be a time capsule for some Filipino Americans. Other diners might define a dish by narrow geography; the adobo in one province might differ from that in the next.

Even the couple’s own status has an “in between” aspect to it, Verzosa says; they often talk about how in the Philippines they are seen as American, but in the U.S. they’re Filipino.

Ultimately, they’ve navigated an identity where every dish in the restaurant is Northwestern, translating Filipino flavor profiles through locally-produced seasonal ingredients. It has required steps as involved as cold-fermenting a fish sauce over months rather than using an imported version, or using black garlic as a seasoning when local alliums weren’t available.

The tasting menu allows for “a conversation” with guests, usually beginning with their version of pandesal, housemade bread rolls. The serving plate for one fish course, kinilaw, incorporates a sardine tin—evoking the Filipino cannery workers. Noodles are made with Northwest wheat rather than rice. Wordplay and puns are worked through the courses, including when the story comes of Maria Orosa and the sauce in her honor.

The discussion of that course “always finishes with this idea of—well, she also went on to the UW,” Verzosa says, of the inventor who studied at the UW between 1917 and 1920. “Most people are very surprised by that.”

They’ve found their stories resonate in different ways. Some guests recognize their family histories, some enjoy new insights and flavors. Some are inspired to call on their own backgrounds, realizing that their own stories and foods define our region too.

“Maybe we’re giving you something you’ve never seen before,” Verzosa says. “But our hope is that it makes you feel like home.”