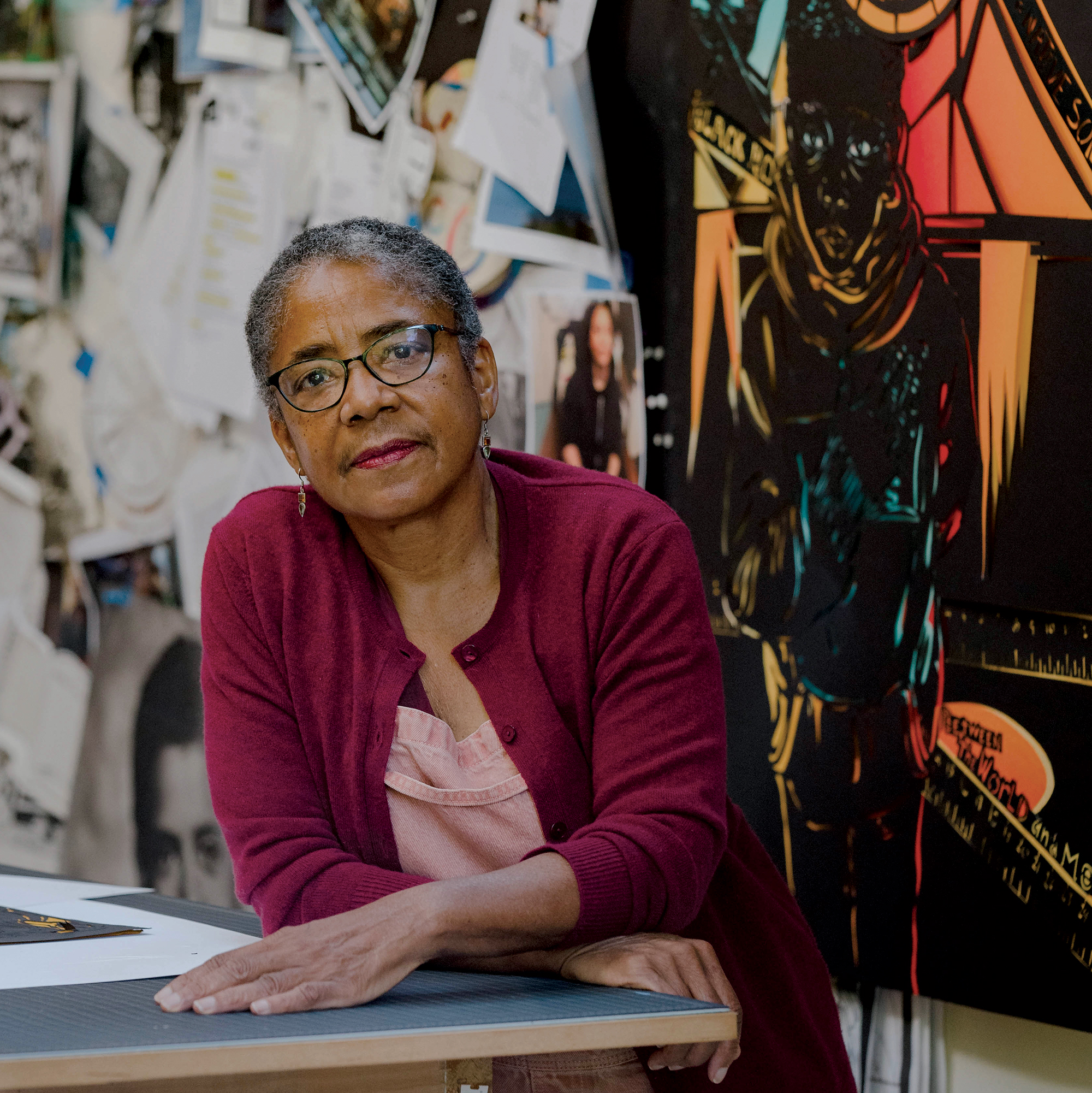 The potent relationship between art and emotion gives artists powerful influence on how generations may perceive the trials and triumphs of their times. With a compelling art piece, an artist can encourage people to think, feel and move through life in different ways. Barbara Earl Thomas, an award-winning artist, speaker, writer, and former director of the Northwest African American Museum, embraces this potential for impact through her work.

“I get to capture a moment and hold it for people,” she says.  “Hopefully when they step through the doors of some space I’ve created, or some experience, if I’ve thought long and hard the idea, it erupts.”

Thomas sees her work as an eruption that stuns the viewer long enough for their mind to react to the ideas in the art and not preconceptions they might have about her work or her subjects. She creates pieces so beautiful that viewers allow themselves to look at a subject they may have seen before as if it were the first time.

In “The Geography of Innocence,” a current exhibit at the Seattle Art Museum, Thomas navigates perceptions of good and evil, innocence and guilt, light and darkness, heaven and hell, and invites viewers to immerse themselves in the unguarded world of a Black child looking out at someone they love and trust. She likens her precise paper cuts to calligraphy. Each slice of the knife carefully maps out the geography of the faces of young children in her life. “I’m hoping they have their own thoughts. I hope they have their own emotional response that disrupts them a bit,” she says.

Thomas, ’73, ’77, was born and raised in Seattle. Her parents were originally from the South and, like so many Black families in the 1940s, were redlined into the Central District. She graduated from Garfield High School in the late 1960s, in the middle of the Civil Rights movement, and later earned her B.A. and M.F.A. degrees at UW under the tutelage of Jacob Lawrence, the most widely acclaimed African American artist of the past century, according to the Smithsonian American Art Museum. For more than 30 years, Thomas has been exhibiting her work all over the country.

In 2016, the Bainbridge Island Art Museum conducted a career survey of Thomas’s work. She agreed to the exhibit under the condition that she could include more contemporary pieces.

“My urge was to be able to make something big and have my narrative be larger than life,” Thomas says. “I created composition that I attached to the wall with pins. There was a certain kind of freedom. Also, because I’m using the knife as my drawing tool, it interrupts my urge to over-describe. If I have a pencil, I can cross-hatch, I can shade. But with the knife, it says, ‘OK, you got to make one cut serve for 2,000 cross-hatchings.’ I found a certain kind of elegance in the restraint.”

The installation, titled “Catechism: an Illuminated Story,” utilizes light and white paper cuts that hung from the ceiling, surrounding the viewer with her work and guiding them along the path of Thomas’s choosing for an immersive experience. The intentional placement of light behind the paper cuts made what illuminates through part of the subject. “Light is like music because it moves,” Thomas says. “Light for me, it’s about mood, it’s about creating shape and tempo for how the person is seeing it. When they step through the room and they see where all of the little pieces have come together, I think of it as the ordinary magic.”

In her South Seattle studio, Barbara Earl Thomas works on pieces for “Packaged Black,” a forthcoming installation at the Henry Art Gallery. The two pieces on the table, “Royal Blue,” right, and “Divine,” explore identity and representation. They are paper cuts with hand-printed color.

The Bainbridge survey, titled “Heaven on Fire,” also featured her glasswork, egg tempera on paper and prints. Thomas’s glasswork, which she fittingly calls “story vessels,” is sandblasted with intricate scenes in a style similar to her cut-paper works. The viewer is thrust into the motion of the subjects through the light that escapes through the glass. Each story vessel incorporates carefully chosen words like “body count,” “rattled” and “send help,” which transport the viewer further into the story that Thomas has created with the imagery.

She doesn’t consider herself a glass artist. It is simply another medium for her to tell her stories. “I love stained glass, so a lot of my work is informed by the fact that I love light coming through glass,” she says.

Thomas views experiencing art as “ordinary magic” or “miracle.” She is agnostic but says she believes in the mystery and is is fascinated with her friends’ and family’s religious outlooks. “I think that what I liked about my grandmother and all those people was that they had these stories and they believed them so deeply that I could see through their eyes to their belief, even if I wasn’t able to believe in the same way,” Thomas says. “I could understand that, and I could enjoy that in them, and be curious.”

Thomas’s grandmother would say things like, “I’ll be right back, God willing,” even when she was leaving to do a simple task in the next room. “The end was always right around the corner for her,” Thomas says. There was mystery in that which fascinated Thomas, but it also prepared her for a life filled with gratitude, with an appreciation for every day and an awareness and comfort in realizing that there will always be things that she will not know. “That’s why it’s great to be an artist, because you’re dealing with the unknown, and you’re embracing the unknown,” Thomas says. “You step off of a metaphoric cliff all the time, and you don’t quite know where the bottom is.” 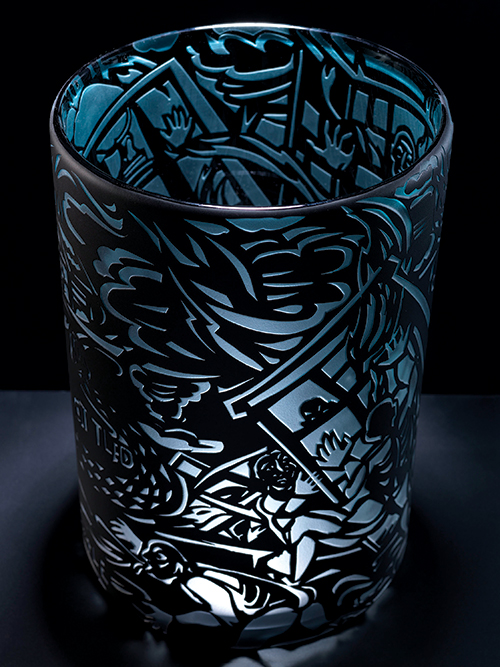 “Story vessels” such as “rattled” are sandblasted with intricate scenes, brought into motion by the light that escapes through the glass.

As a captivated observer of organized religion, Thomas loved the drama of it. The carnal nature of the metaphorical eating the body and drinking the blood of Christ and the incantation of the holy water and swinging of incense in the Catholic Church intrigued her. She visited different denominations to immerse herself in what she calls their “stories.” “I thought, ‘Wow, we all are ensconced in the stories that we have created to make ourselves feel safe,’” Thomas says. “Rather than saying. ‘I’m creating a safe space for myself,’ I’m creating a story that’s making me feel safer than I might feel. My story is, ‘If I do these certain things, I have created a certain kind of order in the chaos.’”

Thomas peppers religious nuance throughout her work. With the paper cuts in “Catechism,” she included a plaque with statements and responses, a twist on the question-and-answer format of traditional Christian catechisms. Her catechism illustrates some of the racism she experienced as a young person in Seattle.

Statement: You are so smart. It must be terrible to be Black.
Response: That is too deep for me.
Statement: If they were all like you, I would like them.
Response: This is not a compliment.

In “The Geography of Innocence,” her paper cuts are often mistaken for images made of stained glass. The precise, detailed cuts on black paper are backlit by bright multicolored paper, allowing different hues to shine through. The concept for this exhibit came from Thomas’s perception of what she calls the “apocalypse of our time.” She points to gun violence, racial violence and other plagues combined with a lack of empathy and compassion for victims of violence as central themes in each of her paper silhouettes.

Thomas believes that our society’s lack of compassion for the deaths of Black children is because our views of good and bad, innocent and guilty, allow people to implicate the children in their own deaths. She explains that if our expectations of young Black children are unfavorable, it affects how they will see themselves. “They give you less because you expect less,” Thomas says. “Kids can pick up on whether or not they scare you, whether or not they make you laugh.”

“I want it to be arresting. I want it to be the best that I can do, and in doing that, I feel that I create an action that is affirmative in the world.”

She alludes to the criminalization of Black and brown children that begins in grade school through harsh disciplinary practices and is exacerbated in middle and high school, creating a school-to-prison pipeline. The criminal stereotype becomes a self-fulfilling prophecy affecting the ways innocence is perceived or allowed and who it is allowed for. “People can say things that you internalize. You don’t realize until much later that people have treated you in a certain way or said certain things that have changed your spontaneity, your joy, your willingness to try something,” Thomas says.

She challenges these preconceptions of guilt by memorializing living, breathing, contributing members of her community. The work “True North” in the “Geography of Innocence” exhibit depicts a family friend as a child. He now works in food justice, is a master gardener and runs community gardens for the City of Seattle. According to Thomas, he has found his true north and has given so much to the local culture and community. This was her way of honoring his achievements and the fact that his life was not violently taken too soon.

“It doesn’t make me perfect and doesn’t make anybody perfect, but it gives us a chance and that’s what we need.”

“I’m just hoping for some effort,” Thomas says. “And I’m hoping that as we’re in these struggles together, that we don’t all just sort of give into our emotions. I don’t want the solution to my grief to be something that diminishes.” But for there to be progress, there has to be action. “I feel like right now, we’re kind of lost in our words,” Thomas says. “We’ve had a lot of symbolic achievements that are big and you put them on a masthead, but now how do we actually get along given the imperfection of our human condition?”