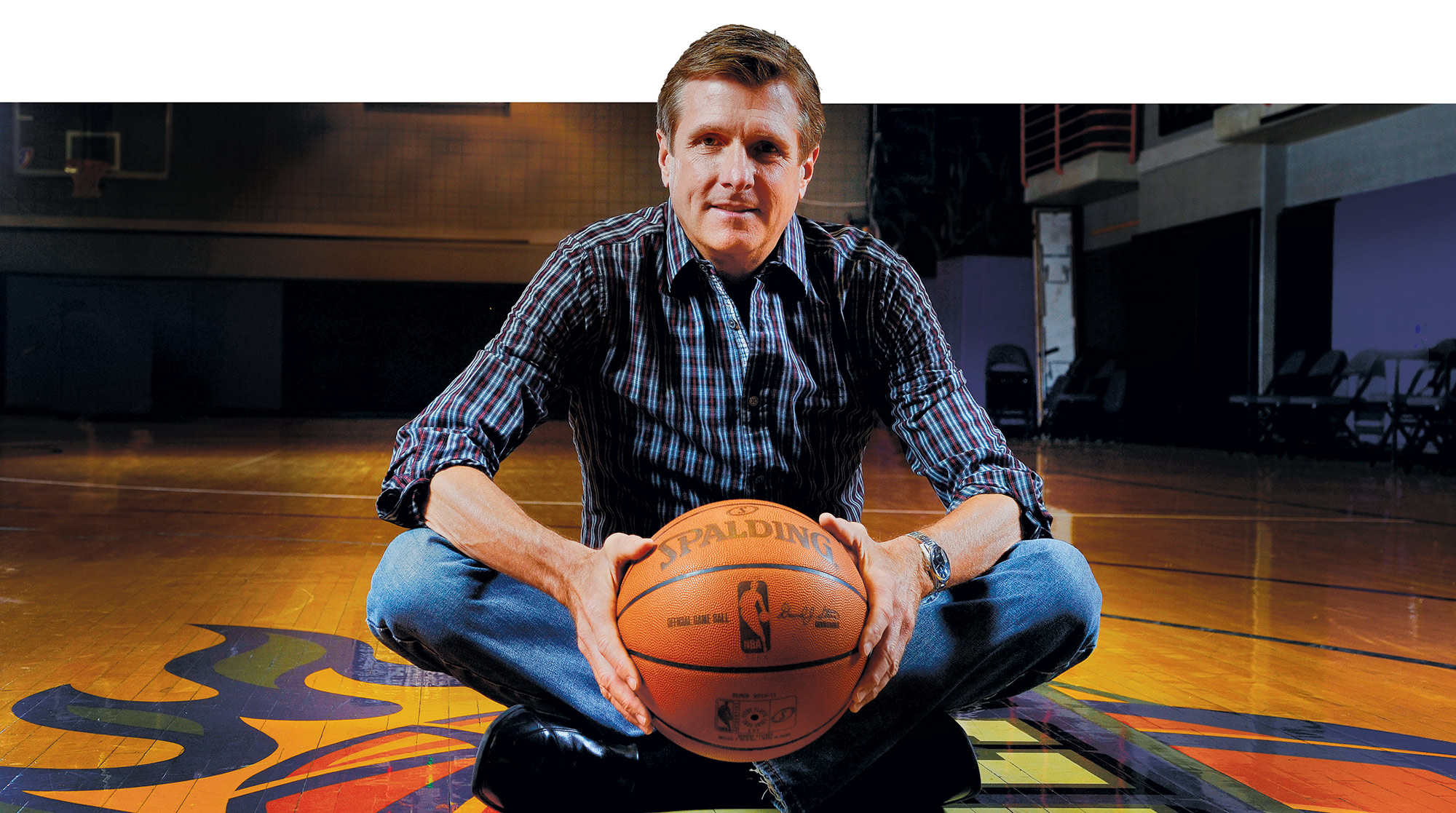 Rick Welts broke new ground as the first executive in major professional sports to declare that he is gay.

When it comes to personal courage, Rick Welts, ’75, knows what it means to stand up. Welts, the president and CEO of the National Basketball Ball Association’s Phoenix Suns, in May became the second person in men’s professional basketball history to come out openly as a gay man. “It was time,” says Welts, who spent 40 years keeping his sexual orientation under wraps except to a small group of family and friends. Fear that full disclosure could hamper his career led him to keep his sexual orientation a private matter until this past spring.

Welts had good reason to worry. Men’s professional team sports is one of the last bastions where “don’t ask, don’t tell” is the unofficial but widely followed policy. In addition to Welts, only former NBA player John Amaechi has come out and that was when he published his memoir in 2007, three years after his career was over.

There was no sports executive model for Welts to follow but he had reached a point where he wanted to lead “a more authentic life.” “The question I had to wrestle with was, ‘Is there some larger good that can come of it?’ rather than just making a personal decision about myself, and that’s what I’m really happy about,” says Welts.

After his stunning revelation in The New York Times, Welts received thousands of emails and about 200 handwritten letters. “Thus far, it’s been overwhelmingly positive. There has not been one negative comment from people who have reached out,” he says. Among those he has heard from are parents worried about their children’s struggles with sexual-identity issues. Welts—the latest in a line of UW alumni who have broken new ground by coming out—was so moved by the response to his disclosure that he is doing his best to respond to every single letter.

Rick Welts’ personal journey began in Seattle’s Magnolia neighborhood, where he grew up as the son and grandson of a long line of Huskies. (His grandfather, Richard “Robin” D. Welts, graduated with his bachelor’s degree in 1924 in history and from UW Law in ’32; his parents and sister are also alums.) “I was going to Husky football games for as far back as I can remember,” he says.

As a teenager, he was aware of his sexual orientation but thought it might change. He set deadlines every couple of years, at which time he would re-evaluate his feelings. “I wasn’t very happy that I would be living my life this way. At that point in my life, it was something I wished I could change. Part of that was the environment in which I grew up,” he says.

Meanwhile, some positive things were going on.

“My big career break was at Queen Anne High School in English lit class with Earl Woodson, who was the coolest kid at QA High because he was a ball boy for the Seattle SuperSonics,” Welts recalls. “We spent a lot more time talking about the Sonics than English lit.”

His big break came when the Woodsons moved out of Seattle, leaving Welts to apply for the ball boy position. “I was a couple of months into it when an assistant trainer position came open,” he says. “Now, you have to have four degrees to be a trainer but at that time, trainers washed uniforms and had them ready for the next game. I was elevated to trainer and given the keys to the Coliseum. Any time I wanted, I could go down there and shoot hoops on the Sonics’ floor. I could bring my friends down, too. That was in the dark ages in the late ’60s. I also vacuumed the locker-room floor.”

“It was great being in a frat, tremendous, because of the friendships that developed sharing the UW experience.”

Welts then moved into the Sonics media relations office to work part time after he had been admitted to the UW and moved into the Delta Chi fraternity house. Initially, he hadn’t considered living in a fraternity. “I thought it would be horrible based on the ridiculous behavior of my relatives who all lived in fraternities,” he says.

But Welts was in for a pleasant surprise, and he made fast friends in the Delta Chi house. “It was great being in a frat, tremendous, because of the friendships that developed sharing the UW experience,” he says.

But he was still experiencing a personal crisis over his sexual orientation. “My impressions of gay people came through the media,” he explains. “They were portrayed stereotypically as flamboyant. I didn’t feel anything like that and that was part of the isolation and discomfort.” Mercifully for Welts, that discomfort dissipated after he met a fellow student who lived in a fraternity like he did. The young fellow liked sports and was gay. “There was a sense of exhilaration that there were other people out there like I was,” Welts says.

Meanwhile, Welts—who had been fascinated with broadcast journalism from an early age—was pursuing a degree in communications.

“I really had a love of television that stemmed from my dad taking me down to KING-TV to watch The Stan Boreson Show. [Boreson, ’50, was a Seattle-area entertainer who played the accordion and had a dog named Nomo on his show.] “I got to watch the show being produced,” Welts reminisces. “I really loved storytelling and the idea of journalism.”

After he graduated from the UW with his bachelor’s degree in communications, the Sonics brought him onboard full-time as public relations director. “At the age of 24, I had what was my ultimate terrific job,” says Welts. The team hired Bill Russell’s cousin, Bob Hopkins, as coach and Lenny Wilkens as the director of player personnel for the 1977-78 season.

After 22 games, the Sonics were mired in last place with a 7-15 record. Hopkins was fired and replaced by Wilkens, who led the team to the NBA Finals that and next season, winning the NBA title in 1979.

In 1982, Welts left Seattle with a one-way ticket to New York City to join the NBA’s headquarters. He used his business savvy to develop the league’s program for sponsors and advertisers. He also turned All-Star Weekend into a popular event. By the time he left in 1999, Welts was the league’s executive vice president and chief marketing officer.

When Welts relocated to New York, he didn’t go alone. Accompanying him on the cross-country move was his longtime partner, L. Arnie Chinn, ’78. In New York, Chinn founded his own design firm, L. Arnie Chinn Studio. Chinn died of complications from AIDS in 1994 at the age of 40.

Welts suffered greatly—and privately—after Chinn’s death because he had kept his sexual identity a secret. No one at work knew what he was going through. An obituary published in the two Seattle newspapers asked for donations to a UW scholarship fund in Chinn’s name that exists today. That fund provides financial assistance to deserving undergraduate or graduate students in the Department of Architecture, a subject Chinn majored in at the UW (along with fine art).

NBA Commissioner David Stern disclosed in a New York Times interview that he had known for years that Welts was gay but felt he couldn’t acknowledge it. What Stern and his wife, Dianne, did, however, was to mail a check for $10,000 to the UW’s L. Arnie Chinn Memorial Endowed Scholarship Fund. “It was his way of acknowledging the situation,” Welts recalls. “It wasn’t until this year though, that we had ‘the conversation.’ ”

Welts’ colleagues in professional basketball have been supportive, and many have said they are happy that he finally was able to talk openly about being gay.

In addition to being a pro sports executive who happens to be gay, Welts also calls himself “an unabashed Seattle lover.” And he would love to figure out a way to live in Seattle again, at least part-time. “I’d go to more Husky football games,” he says, pausing. “And basketball games.” Welts’ early years in Seattle gave him the necessary weather-hardened credentials to return to the Emerald City. “You know,” he says, “I didn’t even own a raincoat until I moved to New York.”

Phoenix Suns CEO Rick Welts, ’75, who in May became the first professional sports team executive to come out as gay, is just the latest in a line of high-profile UW alumni who have had the courage to do so. Others include:

Col. Grethe Cammermeyer, ’76
M.A., Nursing, ’91, Ph.D., Nursing
The retired military nurse lost her job after telling a military interviewer she was a lesbian. She was reinstated.

David Kopay, ’66
B.A., History
The former UW running back in 1975 was the first pro athlete from a major team sport to announce he was gay.

Karen Bryant, ’91
B.A., Communications
The former Husky basketball player is vice president of operations for the Seattle Storm and is openly gay.