With core values formed by his Chehalis upbringing, Orin Smith went on to become a business leader who knew how to treat people right. He posthumously received this year's Alumnus Summa Laude Dignatus Award, the highest honor bestowed upon a University of Washington graduate.

Orin Smith never sought the limelight. But once in a speech to about 6,000 Starbucks employees, the soft-spoken CEO used his last moments on stage to deliver a big message. He urged his employees to a more noble purpose—to inspire and nurture the human spirit.

During several minutes of unending applause, a video shows the emotions sweeping across Smith’s typically stoic face, finally turning to tears and smiles. Caring for his fellow man and caring for the world: Those were the ideals he lived by from his humble childhood in Chehalis to his post-retirement years as a philanthropist, director for some of the country’s most iconic companies and leader for the University of Washington.

Smith was a fan of E.O. Wilson, he drank his coffee black and had a well-hidden competitive streak. He delighted in being an uncle and looking out for his sister and two brothers. He also adored being a father figure to his wife Janet’s two sons and to their three grandchildren. Smith, who died at the age of 75 on March 1, touched many lives through his humanity, leadership, friendship and generosity.

Smith was born in 1942 in Ryderwood, a Cowlitz County logging camp tucked into the woods at the end of a southwest Washington road. Though it was one of the largest logging camps in the country back then, it was still literally at the end of the road.

His mother, Vernetta, was the rock of the family. She had grown up in Ryderwood, was her high school’s valedictorian and earned a college scholarship. But in the late 1930s, she didn’t have the means to continue her education. In 1941, she married Curtis Smith. Soon after Orin was born, the family moved to Chehalis, a town of a few thousand that had grown up alongside the Northern Pacific Railroad line.

The family scraped by but Smith did his share: He had a paper route, picked strawberries and loaded hay into barns in the heat of the summer. For entertainment, Vernetta’s children relied on the library.

As a teen, Orin rose to prominence as a starting guard for the W. F. West High School basketball team. To the delight of the town, the 1960 Bearcats took the league title before winning the district championship. Then, to everyone’s surprise, they brought home the first and only state basketball title in the history of Chehalis.

The Class A championship game was played at the University of Puget Sound field house before 6,500 spectators. “For kids from a little community in Chehalis to play in front of a crowd like that and play extraordinarily well … was really exhilarating,” Smith later told the local newspaper, the Chronicle.

“Our culture, values, core principals and reason for being: That is the signature of Orin Smith.”

When Smith was a senior, townspeople urged him to consider college. His coaches mentored him, helping him identify a school and find scholarships. Their efforts forged in Smith a lifelong interest in giving back to that community.

After two years at Centralia College, Smith moved on to the UW to study business. He credited a constitutional law class taught by William Greiner with motivating him to pursue graduate school. “It was a class of 10, 11, 12 people, a pretty intimate setting. The interaction was terrific and we had a great instructor,” Smith told the newspaper at the State University of New York at Buffalo, where Greiner later became president. “(Greiner) challenged us with the issues of constitutional law, forcing us to think and speak and articulate our position. It was such a challenging course, like nothing any of us had had before.”

But Smith also cited lessons he learned at his first job after college at Boeing. Six months in, he realized his future wasn’t among the “rows of engineers working at desks.” So he applied to Harvard Business School. “I was a late applicant, so I charged in and took the admissions test,” he told the East Coast university paper. He was admitted in June of 1966 and completed his MBA in 1967.

After Harvard, he moved back to the Pacific Northwest and joined a consulting firm that is known today as Deloitte. He eventually led the firm’s Northwest practice. But in the 1970s, he shifted his focus to public service as chief policy and finance officer for Washington Gov. Dixie Lee Ray. He returned to state government in the 1980s to perform the same job for Gov. Booth Gardner, ’58. 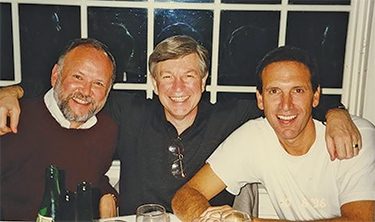 In 1990, Smith was working as an executive for an international shipping company when Starbucks called. The company needed a chief financial officer who could help it grow from local coffeehouse to international powerhouse. A headhunter had submitted some high-profile names, but Jeff Brotman, ’64, ’67, co-founder of Costco and an early Starbucks investor, urged the company to consider Smith.

Working closely with Schultz and Behar, Smith became the final piece of a formidable team. They quickly became known as H2O, Howard, Howard and Orin. Schultz provided the vision, Behar the soul and Smith the fiscal responsibility. But Smith’s work shaped much more than the bottom line. He helped the company live the values it expressed: prioritizing employee experience and sustainable environmental practices. Starbucks kept its character while becoming one of the world’s fastest-growing global brands.

“Our culture, values, core principals and reason for being: That is the signature of Orin Smith,” Schultz said. “And his deep sense of humanity was something quite extraordinary.”

Knowing the value of human interaction, Smith was caring and thoughtful to the core, Behar said. “He was a guy who added something to everybody he touched.”

With Smith onboard first as CFO then COO and finally CEO, Starbucks expanded to more than 10,000 locations worldwide and more than $5 billion in sales. Smith also led Starbucks to link coffee production to the protection of rain forests. “Orin was a pioneer,” said Peter Seligmann, chairman of the nonprofit environmental group Conservation International. He understood biodiversity and human well-being, Seligmann said, “And when he spoke—usually softly—people learned, they leaned in and they opened their minds.”

Though Smith retired from Starbucks in 2005, he didn’t retire from work he loved. He joined the boards of the Walt Disney Company and Nike, and the advisory boards at the Foster School of Business and UW Medicine. He also served as chair of the UW Foundation Board, which supports efforts to raise money for University students and programs. In 2010, he joined the UW Board of Regents and helped shepherd the school through a time of significant growth and two changes in presidents. Most recently, he and his wife, Janet, volunteered to co-chair the University’s Be Boundless philanthropic campaign. 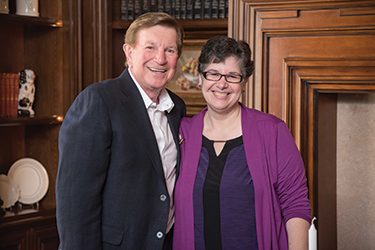 Orin Smith and President Ana Mari Cauce at a 2016 brunch for the Foster School of Business.

“His legacy is something to truly celebrate, even in our sadness,” UW President Ana Mari Cauce told more than 500 friends, family and former employees at Smith’s memorial service, which was held on the UW campus in April. “Whenever he saw a way to do some good, he stepped up and did it—quietly and with kindness and good humor.”

Smith was also widely known for his generosity—giving his time and money to environmental causes, public education and the welfare of Chehalis. He supported the renovation of the city’s library, which was renamed in honor of his mother, and he gave $10 million to the community foundation to support student achievement in a school district where half the families qualify as low-income.

Once built, Chehalis’ newest school will be named Orin C. Smith Intermediate School. The honor springs not from his generosity to the town, but because his “story tells every kid in our community that you can make it,” said J. Vander Stoep, ’89, of the Chehalis Community Foundation. “It even tells them that with hard work and initiative, you can make it to the top.”

At the UW, the Smiths established student fellowships and scholarships, supported medical research and funded a deanship at the Foster School of Business. “Orin loved working with people who were nurturing the human spirit,” said Connie Kravas, the UW’s vice president for advancement and someone who witnessed Smith’s deepened engagement with the University over nearly 20 years. Smith is the only UW alumnus whose name graces a campus coffee shop. Orin’s Place in PACCAR Hall inside the Foster School of Business draws not only business students but people from across campus.

“Orin Smith was one of the finest individuals Jeff and I ever knew,” said Susan Brotman, Jeff’s wife and a UW volunteer who served alongside Smith for many years. “He was a great source of wisdom and support.” She cited his work with Starbucks and the boards of major U.S. companies, his service on many UW boards, and his support of his hometown Chehalis. “I miss his wit, his friendship, his many contributions to our community. He was the best of the best.”

Last summer, after Smith was diagnosed with pancreatic cancer, he turned his focus to loved ones and welcomed visitors to his home in Wyoming. He traveled back to Chehalis one last time and—in typical Orin Smith detail-focused fashion—worked with Janet to plan his memorial.

“Orin Smith was a remarkable person. And his love for the UW was immeasurable,” President Cauce said. “He leaves the world more educated, more sustainable and kinder than he found it.”

Basketball revealed another side of Orin Smith 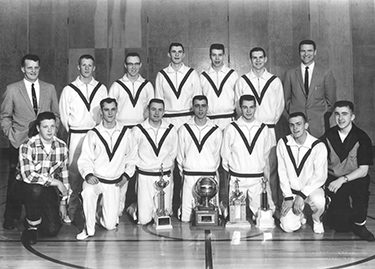 While Orin Smith’s public persona was that of a cool-headed corporate executive, attendees of Smith’s memorial service in April were treated to personal stories that showed another side of the beloved UW alumnus. In the words of friend and former Starbucks CEO Howard Schultz:

Orin was a fierce competitor. In 1995, we were involved in a joint venture with Pepsi Cola. At the time, we were struggling with the two cultures of the companies. We had an off-site (meeting) with them at my home on the East Coast. There were about eight of us and eight of them and we started kidding around during the afternoon lunch that when this is all over and we were finished, we would play a game of basketball. We can decide it on the court.

Anyway, we were losing in the game. We were playing to 15 and I think the score was 11-7 or something like that. All of a sudden Orin says, “Huddle up.”

What are you talking about? And the guy starts screaming at us. I never saw this side of him in my entire life. And the huddle was like you were right in his face and he started spitting at you. And he said, “Just give me the goddamn ball.”

And all of a sudden Orin Smith turns into this 18-year-old Chehalis basketball player and starts hitting jump shots. I said, “Who is this guy?” And the Pepsi guys said, “Man!” After the game, which Starbucks won, they started asking Orin, “Did you play college basketball?” And he said, “No. High school. Chehalis.”