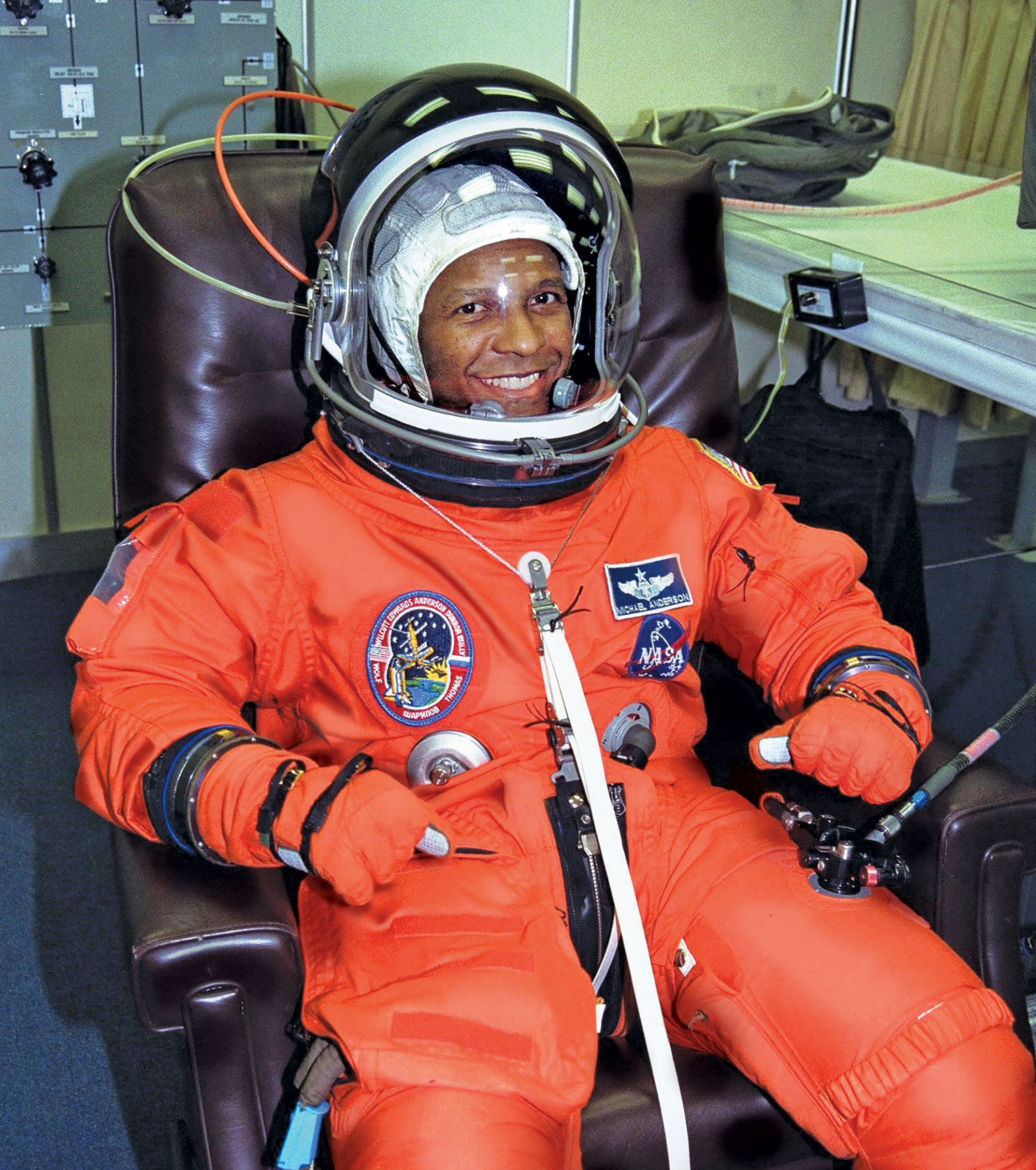 On the 20th anniversary of the Space Shuttle Columbia tragedy, we remember astronaut Michael Anderson, ’81.

Michael Anderson was 9 years old when Neil Armstrong stepped onto the moon in 1969. After witnessing that historic moment, Anderson, ’81, was determined to follow in the space pioneer’s footsteps. In a bedroom adorned with model airplanes and rocket ships, he began to memorize NASA astronauts’ names and imagined his name on that list.

Although none of Anderson’s astronaut role models were African American, he was undeterred. “I don’t think I ever thought I couldn’t do it,” he recalled years later. “I never had any serious doubt about it. It was just a matter of when.”

In December 1994, Anderson was selected by NASA to be an astronaut, and in 1998, he realized his dream of going into space, traveling to the Russian space station Mir aboard the Space Shuttle Endeavour. Five years later, he was part of another mission on Space Shuttle Columbia. But he never made it home. The spacecraft disintegrated upon re-entry to Earth on Feb. 1, 2003.

I’d interviewed Anderson after his first shuttle mission for a story about astronauts who hailed from the UW College of Arts & Sciences. His eagerness to return to space had been palpable during the interview. His descriptions of space flight—particularly his own experience of it—were compelling and vivid.

“Right before the engines cut off, you are being pushed back in the seat by 3 Gs of pressure,” he told me, recalling the moment when Endeavour hit orbit about eight minutes into the flight. “Then you suddenly go to zero Gs [zero gravity]. I remember being thrown forward in my seat and then watching everything around me start to float, including ice crystals that had formed outside the vehicle. As the sun caught those ice crystals—thousands of them—they looked like brilliant shining diamonds floating in the darkness of space. But that’s just one of hundreds of moments that stick out in my mind.” 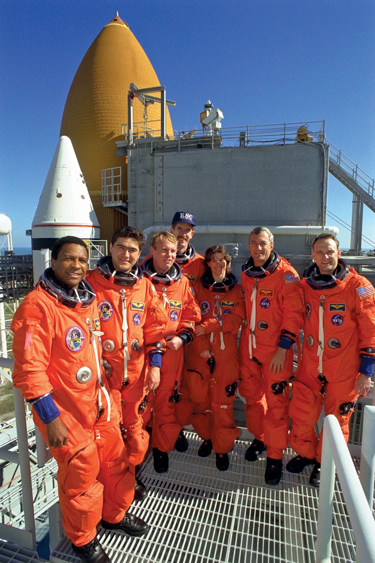 Michael Anderson, left, and the rest of the STS-89 Space Shuttle Endeavour crew take a moment during a Terminal Countdown Demonstration Test.

By age 3, Anderson knew he would venture into space. “It was just the adventure of it,” he later recalled. In an interview with the Spokesman-Review before his first space flight, one of his sisters shared how the future astronaut sent her on imaginary trips to the moon every Saturday morning, beaming her up to the top bunk bed in his room. Not surprisingly, he was hooked on TV shows like “Star Trek” and “Lost in Space.”

The Anderson family moved several times during his childhood, due to his father’s Air Force career. When Anderson, who was born in Plattsburgh, N.Y., was 11, they settled in Cheney, near Spokane. He attended Cheney High School, and years later still thought of Spokane as his hometown.

His next move was to the University of Washington, where he planned to major in aeronautical engineering. However, an elective physics course changed his mind. He was drawn to the elegance of physics, finding it more suited to his interests. He added a second major in astronomy and joined the UW’s Air Force ROTC.

“He was warm, even-keeled, easygoing,” UW friend and classmate William Tyler, ’83, told Columns Magazine in 2003. “There was no stress about him. He was so focused.”

After graduating, Anderson joined the Air Force, first as a communication electronics officer and then as a pilot, aircraft commander, flight instructor and tactics officer. He went on to pursue a master’s degree in physics at Creighton University before joining NASA’s astronaut training program in 1995. By then, there were several African American astronauts, but it remained a small group. (Yvonne Cagle, ’85, was selected as an astronaut in 1996 but never went into space.)

A UW connection, a Russian rendezvous 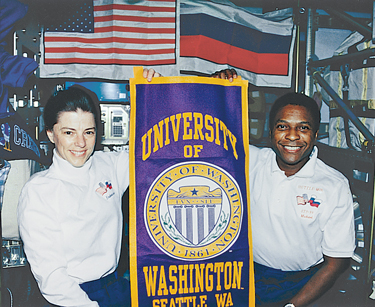 Bonnie Dunbar and Michael Anderson show their Husky spirit aboard the Endeavour in 1998.

As an astronaut candidate, Anderson began a grueling training program that included survival training, space shuttle simulator exercises, classes in navigation and orbital dynamics, and more. Once he was assigned as mission specialist for Space Shuttle Endeavour, Anderson began one year of mission-specific training with the rest of the crew.

On that crew was another Husky, Bonnie Dunbar, ’71, ’76, who was about to embark on her fifth and final shuttle mission. The pair brought a Husky banner on board to celebrate their UW connection, holding it aloft for cameras as they floated in zero gravity.

“I was always very impressed with him,” Dunbar said of Anderson. “He had a very calm demeanor. He did such a great job on the flight that I recommended him for selection to a future flight.”

The Endeavour crew had multiple goals: to conduct experiments, transfer supplies to space station Mir and deliver an astronaut to Mir while bringing another one home. The work required Russian-American cooperation, which appealed to Anderson. He took Russian language classes in preparation.

“Working with the Russians was one of the highlights of the whole deal,” he said after his return. “It was just fascinating, two countries that had animosity for so long now working together. We can learn a lot from each other. It’s ironic that we have to leave the planet to get along and work together.”

After Endeavour, Anderson was eager to return to space. His opportunity came with a 16-day mission on Space Shuttle Columbia in early 2003. The mission was dedicated to running experiments, ranging from studies of prostate cancer to observing the effects of gravity on harvester ants. Working 24 hours a day in alternating shifts, the crew successfully conducted about 80 experiments in orbit. As the mission’s payload commander,  Anderson was responsible for managing the experiments to ensure that everything was done properly.

“This is one of few research flights we’ve had in a long time,” he commented in a video interview for Space.com before the flight. “For someone interested in space science like myself, it’s really the dream flight.”

The Columbia mission ended tragically on Feb. 1, 2003, just 16 minutes before the shuttle’s scheduled landing at Cape Canaveral. NASA later confirmed that damage to the spacecraft’s left wing during the launch—damage NASA had mistakenly deemed non-threatening during the mission—allowed hot atmospheric gases to enter the wing upon reentry.

After the disaster, I reread scribbled notes from my interview with Anderson. I had asked him how he handled fear, given the unforgiving nature of space travel. He’d replied that it was never an issue for him.

“I don’t know why that is,” he told me. “Maybe because the training simply prepares you for it. By the time you make it to the actual space flight, you’re so excited. You just want to do your job. Fear has been dealt with. It’s one of those things you simply don’t dwell upon at all.”

And yet Anderson, a husband and father, was not in denial about the risks of his work. At Sunday services two days after the shuttle disaster, Spokane Rev. Freeman Simmons told his congregation about a conversation with Anderson before the flight. As reported in The New York Times, Anderson told the reverend, “If this thing don’t come out right, don’t worry about me. I’m just going on higher.”

Years later, on the 15th anniversary of Anderson’s death, his mother reflected on her son’s legacy. “Even though he had just turned 43, he had a full life,” she told the Spokesman-Review. “He did wonders in that length of time. Sometimes it isn’t the length that you live, it’s the quality.”

To celebrate Anderson’s accomplishments, elementary schools, parks and highways have been renamed in his honor. An asteroid and a lunar crater also bear his name. He was posthumously awarded the Congressional Space Medal of Honor, the NASA Space Flight Medal, the NASA Distinguished Service Medal and the Defense Distinguished Service Medal. A statue of Anderson was unveiled in Spokane’s Riverfront Park in 2005, with a duplicate installed at the Museum of Flight in Seattle, where an aerospace program was created in his honor.

At the UW, the Lt. Col. Michael P. Anderson Memorial Diversity Scholarship was established in 2004. The scholarship encourages underrepresented minority students to pursue the sciences and engineering. To date, 16 students have benefited from the scholarship support.

Anderson would likely be pleased that a scholarship bearing his name supports future scientists and engineers. But that sort of recognition was never his goal.

“The space shuttle program would select people who were more about the program than about themselves, and Mike was very much that kind of person,” said Dunbar. “He wasn’t out there to aggrandize himself, but to really help move human space flight forward. And he did that.”

Anderson smiles for the camera on Columbia’s AFD during STS-107. Photo courtesy of NASA.

STS-107 Payload Commander Michael Anderson gets help with his launch and entry suit from the Closeout Crew in the White Room in January 2003. Photo courtesy of NASA.

During Terminal Countdown Demonstration Test activities at the launch pad, the STS-107 crew pauses for a group photo in December 2002. Photo courtesy of NASA.

MS Anderson exercises on an ergometer in January 1998. Photo courtesy of NASA.

A ceremonial wreath is placed at the Space Mirror Memorial at the Kennedy Space Center Visitor Complex. Photo courtesy of NASA.