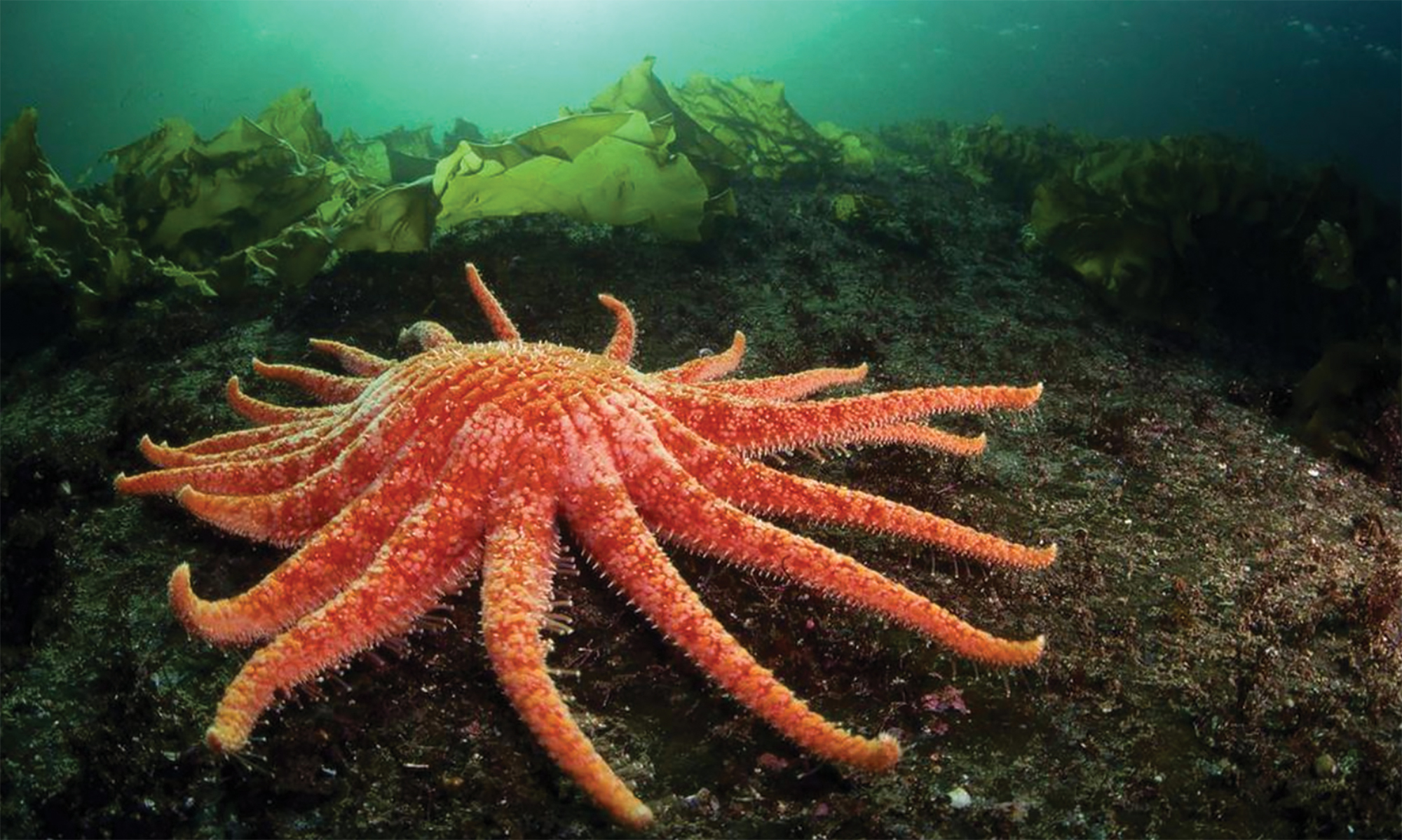 At the UW's Friday Harbor Laboratories, scientists give sunflower sea stars a chance to shine.

In early spring, dozens of juvenile sea stars no bigger than poppy seeds had transformed in the tanks of UW’s Friday Harbor Laboratories from floating larvae to mini stars—the important first step toward becoming adults. Scientists and students had cause to celebrate. These sunflower sea stars, the largest sea star species in the world, will grow up to two feet across with 24 arms radiating from a colorful body the size of a serving platter.

Once abundant from Alaska to Southern California, the sunflower sea star is under attack by a mysterious wasting disease that has wiped out about 90% of the population and severely damaged other sea star species. In December, the sunflower sea star was listed as critically endangered by the International Union for Conservation of Nature, prompting a new focus on recovery efforts—including captive breeding.

The Friday Harbor project, a partnership between the University of Washington and The Nature Conservancy, aims to learn more about sunflower sea stars and explore eventual reintroduction to the wild. A UW research team is currently raising sea stars in several phases of development.

By raising a new generation of sea stars in the lab, “we’re hoping that our efforts can help in the process of recovery of the sunflower sea star and, ultimately, recovery of the health of ecosystems like the kelp forests that are under threat right now,” says Jason Hodin, the research scientist leading the captive rearing efforts. Before the wasting disease took hold in 2013, sunflower sea stars were key predators, especially of purple sea urchins. Now, with the population nearly gone, the sea urchins have run rampant. “The loss of this important predator has left an explosion of purple urchins unchecked and has contributed to devastated kelp forests along the West Coast, making this ecosystem more vulnerable and less resilient to the stressors it’s already facing,” says Norah Eddy, associate director of The Nature Conservancy’s California Oceans Program.

The stars are expected to be fully grown after two or three years, but even that isn’t certain for a species that has never before been grown in captivity.

The UW team first collected about 30 healthy adult sea stars from among the last-known wild colonies in the Salish Sea. Each adult star has a unique color pattern and was named, affectionately, by researchers based on its physical characteristics. “Clooney” has silver hairlike features, “Fanta” is bright orange and “Prince” boasts purple tips on each arm.

In 2020, Hodin and collaborators successfully bred several adult stars, and they soon discovered the challenge of raising the early juvenile stages—a feat never previously accomplished for this species, and for very few types of sea stars at all. After a challenging year of trial and error, they saw 14 juveniles cross the one-year mark, improving the likelihood they will make it to adulthood. The stars are expected to be fully grown after two or three years, but even that isn’t certain for a species that has never before been grown in captivity.

In January, the researchers applied what they had learned and successfully produced tens of thousands of new larvae. The tiny critters, living in mason jars and seen clearly only under a microscope, are being raised in varying water temperatures, to test, in part, whether the species can survive warmer ocean temperatures expected under climate change.

The first few larvae to undergo the dramatic metamorphosis process into juvenile form—essentially the mini version of an adult—were raised at warmer temperatures, which is a positive sign for the sunflower sea star to recover in the midst of a warming world, Hodin says.

“These are not typical ocean temperatures around here, and yet their apparent success indicates that the larvae at least are robust to temperature increases expected with climate change,” Hodin says.

The first step of this project is to learn as much about the life cycle and biology of the sunflower sea star. There are no specific plans to reintroduce it to the wild, yet, and any future effort would involve more discussion among scientists and permission from wildlife agencies.