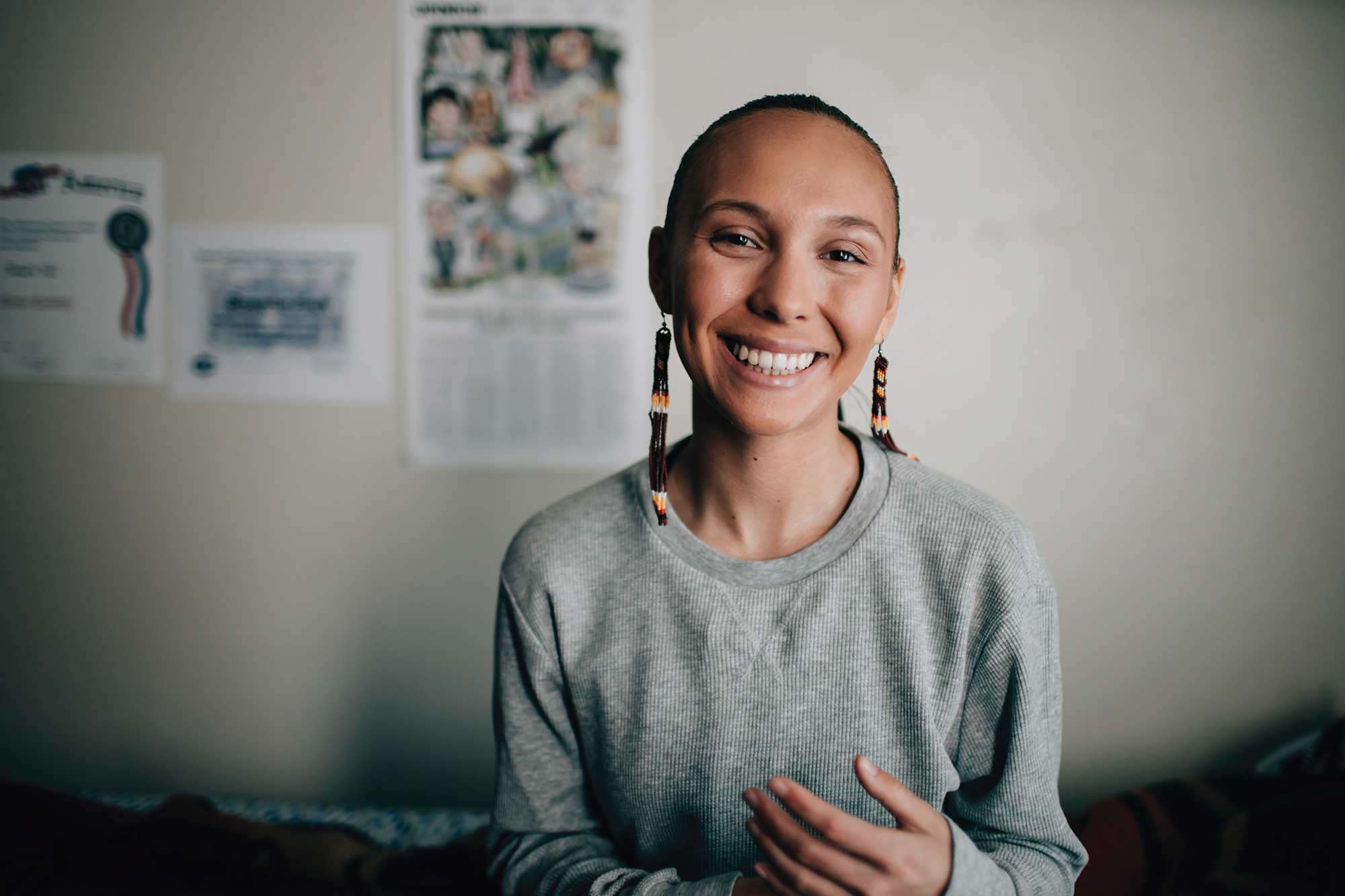 Rosalie Fish, who was recruited to the UW Track & Field Team last spring, is already nationally known—not only as a track and field champion, but for drawing attention to missing and murdered Indigenous women (MMIW).

Fish is a member of the Cowlitz Tribe, of Muckleshoot heritage, who grew up on the Muckleshoot Reservation. In 2019, she ran in the Washington state high school track meet with a red handprint painted on her face, symbolizing the many Indigenous women who were silenced by violence. She also had MMIW painted on her leg to raise awareness about the thousands of MMIW every year. Women, girls and two-spirits (a complex traditional social and ceremonial role for an Indigenous person who embodies the masculine and feminine spirit) are subject to sexual violence, kidnapping, sex-trafficking and murder predominantly at the hands of non-Natives, and often without recourse. 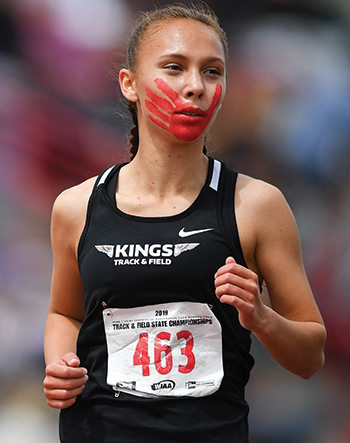 Rosalie Fish ran in the 2019 state high school track meet with a red handprint on her face, symbolizing Indigenous women silenced by violence. (Photo by Tyler Tjomsland, The Spokesman Review)

Since the Major Crimes Act of 1885, tribal courts have not been able to prosecute non-Native criminals even if they live on a reservation. This jurisdictional nightmare has allowed the fates of many missing and murdered Indigenous women to remain unknown. Often the responsibility to investigate falls to local or state law enforcement and the federal government. Determining whose role it is to take on these cases results in slow responses. Evidence is lost, cases go cold and victims’ families never get answers. According to the Urban Indian Health Institute, Indigenous women, girls and two-spirit people living on reservations are murdered at a rate 10 times the national average; murder is their third-leading cause of death. For the more than three-quarters of Indigenous populations who do not live on reservations, housing and homelessness are major issues. Due to misclassification, underreporting and the impact of systemic racism, very little is known about MMIW in urban areas.

At the 2019 Washington state high school track & field championship, Fish won the 800-, 1600- and 3200-meter races and finished second in the 400-meter race, dedicating each event to a specific woman who was missing or murdered. One of them was her aunt, Alice Looney, whose body was found under a tree a year after she went missing in 2004. This race garnered Fish, MMIW and Muckleshoot Tribal School national media attention. “I hadn’t really anticipated that big of a response from the first time I had run,” Fish says. “For whatever reason, I was responded to. And now it’s absolutely my responsibility to do something good with that.”

When Fish started running track in high school, she was Muckleshoot Tribal School’s only runner. By her junior year, she became the Washington state champion in the 2-mile run. Her journey wasn’t without its difficulties, though. In her senior year, she wasn’t entered into some competitive meets even though she was qualified. When she called to find out why, she heard discriminatory comments like, “Do you even have a uniform?” and “I’ve never heard of your school before.” That same year, students from another school vandalized a gym bathroom where she was competing with targeted slurs. “It made me realize that there was no way that I could ever ignore this,” Fish says. “It was something that has and most likely will stick with me forever. Not only is this something that I face, but it’s something that every single Muckleshoot Tribal School student, every Muckleshoot Tribal member will face.”

“When I run for missing and murdered Indigenous women, it’s not my political stance, it’s a cry for help to look at my humanity.”

Fish realized that when she ran, she wasn’t just representing herself or her school, she was representing the Muckleshoot Tribe. “That was what drew me to running—being able to not feel powerless against racism toward Native Americans and toward the Muckleshoot Tribe,” Fish says. This realization drove her to train six, sometimes seven days a week.

During Fish’s first year as an athlete at Iowa Central Community College, she scoured the National Junior College Athletic Association (NJCAA) rule book to make sure she would not be violating any rules by competing with the red handprint and the letters MMIW. Not finding any, she reached out to the NJCAA board with her coach to make sure there wouldn’t be any issues. The first response was that she would not be allowed to run with paint on her body because it was considered too political and divisive. “I don’t find my identity as political and I hope that others don’t find me political, either,” Fish says. “To say, ‘Stop killing us,’ should not be political. When I run for missing and murdered Indigenous women, it’s not my political stance, it’s a cry for help to look at my humanity.” Fortunately, Fish and her coach spoke to another board member and received clearance to run with her red paint.

After finishing her associate’s degree, it was important to Fish to continue her education at a school that supported her activism. “A conversation, especially when it comes to prospective coaches about my intersectional activism for Indigenous women, can be a little bit scary because I never know what response I’m going to receive,” Fish says.

When she asked Maurica Powell, director of track and field and cross country at the UW, if she would support her calling attention to MMIW when other athletes, coaches or even the NCAA might not approve, Powell reassured her. “She said that it should already be my right, and if it isn’t, she’s going to work with me to change that,” Fish says. “That was one of the best things I could hear from a prospective coach, especially at a school like the University of Washington, which was my dream school.”