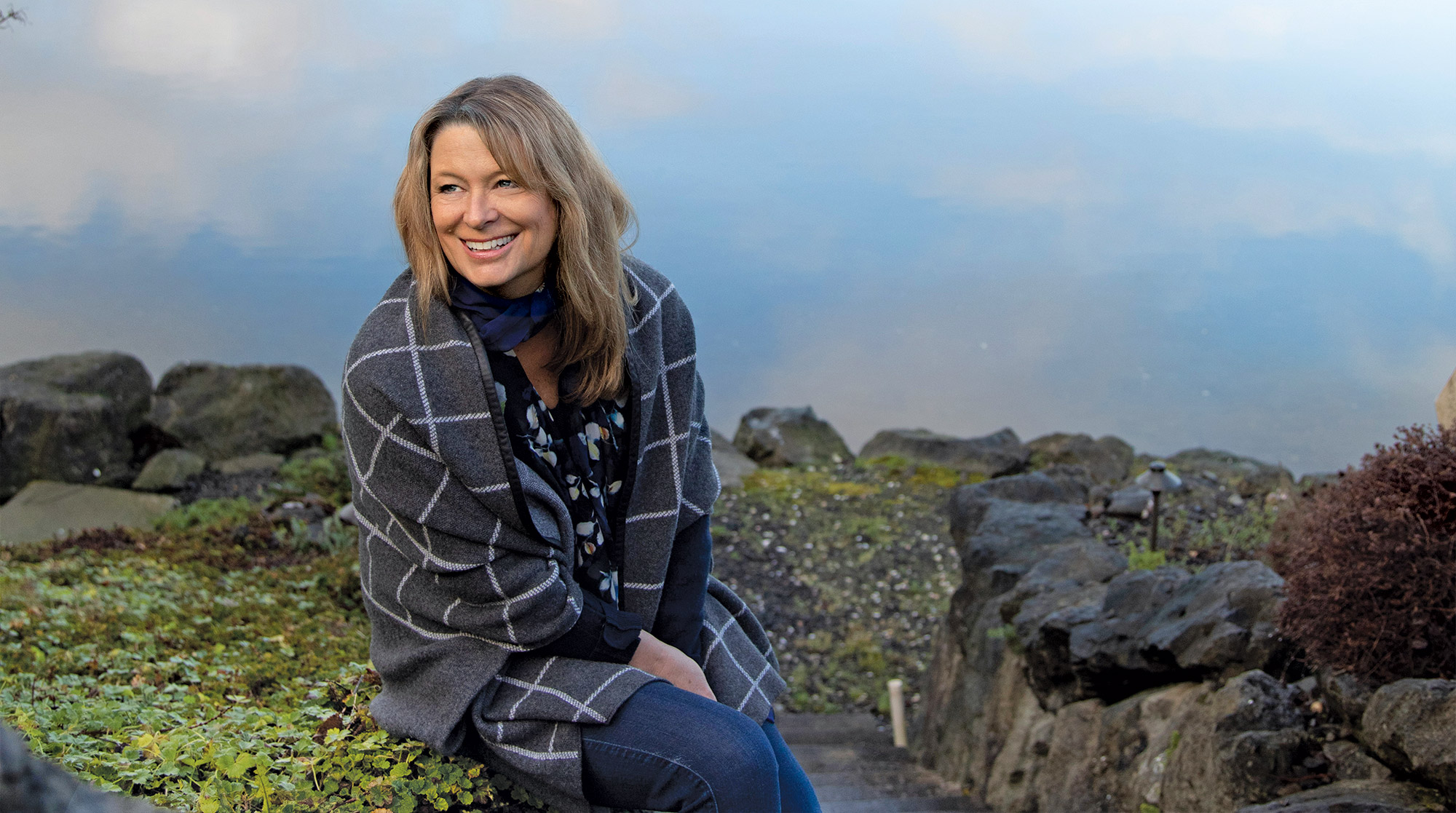 Tearjerkers and epic female-driven novels have earned the 1983 alumna an international following.

Kristin Hannah, the best-selling author of historical romances, does her writing in a most unromantic way. On a yellow legal notepad.

Admittedly, she chooses some pleasant perches from which to compose. She starts her days up in her bedroom, in a chair next to the fireplace. If the weather’s nice, she will move to the patio of the wood-shingled waterfront home near Seattle that she shares with her husband, Benjamin.

But really, it’s her process—efficient and orderly with outlines, research, drafts and dedicated writing time—that seems to run counter to the lush landscapes and lively tales she brings to life in her sweeping novels.

“I don’t think of myself as one of those freewheeling muse-driven writers,” says Hannah, ’83, during a recent interview at her home. “I’m more organized, descriptive and analytical.” It has served her well as she has written more than 20 books, including “The Nightingale,” her 2015 novel about women in the French Resistance. The book has sold more than 2 million copies and been published in more than 40 languages. It was a No. 1 New York Times best-seller and a Wall Street Journal Best Book of the Year.

Hannah’s methodical approach to her work may come, in part, from her training and practice as a lawyer. Or it may be an instinctive response to the free-spirited childhood her family provided.

“I do sort of consciously put my characters through really terrible things. In doing that, they find out who they really are.”

When Hannah was 8, in 1968, her parents decided to flee crowded Southern California. They loaded Hannah, her younger brother and sister, and a couple of friends into a VW van and took off on a 16-week quest. “What my dad said was, ‘Raise your hand when you see home,’” says Hannah. Everyone in the van found something they liked in the Pacific Northwest.

So they settled in Snohomish, and from there frequently made their way up to the mountains and to Alaska to go fishing. That Pacific Northwest grounding is why the region factors into Hannah’s books, whether it is a brief stopping point or a central character.

While she started out writing romance, Hannah has evolved to be master of the tearjerker: Best friends and betrayal, a family torn apart by war, a fragile child, mother-daughter bonds. Other writers have asked her if she gets caught up in the emotions and experiences of her characters. Hannah laughs. “For me, writing is a job,” she says. “I do my job and then I stop.

“I do sort of consciously put my characters through really terrible things. In doing that, they find out who they really are.”

Just as her novels are tinged with heartbreak, so is Hannah’s own story of finding her calling. When she was in her third year of law school at the University of Puget Sound, her mother was in the advanced stages of breast cancer. “I would go to see her every day after class and somehow one day I was complaining about one of my classes. She said, ‘Don’t worry about it, you’re going to be a writer anyway.’”

That premonition became a plan for mother and daughter to work together on a book. Hannah wanted to try writing horror, but her mother held sway with historical romance. “She said, ‘I’m sick, I pick,’” says Hannah. “Who can argue with that?” Hannah spent hours by her mom’s hospital bed, capturing their ideas on paper. As her mother grew weaker, their story came to life. “It gave us something uplifting to talk about in the last days,” she says.

Writing has become such a part of her that if she goes more than a day or two without it, she feels on edge.

When her mother died, Hannah bundled the draft, notes and research into a box and put it away while she went on to become a lawyer. Not until a few years later, when she was pregnant and ordered to bed rest, did she return to the book as a way to beat the boredom. She quickly found she liked telling stories as well as the accomplishment she felt as she progressed through the novel.

She decided to keep at it after her son was born. “I thought I’d give myself until he left for kindergarten,” she says. Now, he’s through college and has a family of his own. And writing has become such a part of her that if she goes more than a day or two without it, she feels on edge.

Hannah’s first novel, “Handful of Heaven,” published in 1991, was a Gold Rush-era Alaska romance starring a beautiful, adventurous woman and a gruff, misunderstood man. It had a classic cover of lovers in a clinch. With it, Hannah was on her way, cranking out another book the following year. And then another the year after that. In 2004, the paperback edition of “On Mystic Lake” became her first book to make The New York Times Best Seller list. In it, as in all her novels, her characters deal with love, loss and recovery. Hannah says her aim is not to write “great literature” but to craft compelling stories.

“What people choose to read is not necessarily what they’ve been told to read,” Hannah says. Among her own favorites are “Gone With the Wind,” “The Thorn Birds,” and “Anna Karenina.” “I have always loved best the big emotional epic female-driven novel that takes me to another time and place,” she says.

“I don’t think my neighbors even know I’m a writer.”

“‘Firefly Lane’ is my UW book,” Hannah says of her 2008 best-seller that features two best friends over 40 years. It is, she admits, the most personal and autobiographical of her books. It draws details from her 1970s-era childhood in Snohomish and her college years at the UW. The characters cross Red Square to hear lectures in Kane Hall and hang out at the HUB. One majors in communication, just like Hannah did. The other contends with breast cancer, like Hannah’s mother. The book, which sold more than 1.2 million copies, gave the author a chance to explore and understand her mother’s experience as well as to spend some time in the “REI-clad” Seattle in which she came of age.

But it was “The Nightingale” that became a professional turning point. “It’s the book where I found my voice, my footing and my future,” Hannah told The New York Times last year. It covers an important time in world history and takes inspiration from real stories of women in the Resistance. Like those women, her characters rescue Jewish children from the Nazis and help downed Allied airmen escape from France. In taking on the subject, Hannah manages to provide a rarer, women’s point of view of World War II.

Hannah’s most recent novel, “The Great Alone,” features a 1970s Alaska homesteading family. It’s a tale of human struggles and survival set in a beautiful and dangerous landscape. The book, released last spring, shot to the top of The New York Times Best Seller list and was a Washington Post “notable work of fiction” of 2018. Both “The Nightingale” and “The Great Alone” have been optioned by Tri-Star Pictures.

She has surpassed her mother’s vision, becoming an internationally famous author with a massive fan following—her rare book signings are typically jam-packed. Even so, Hannah, in classic Northwest fashion, has kept a low profile at home. “I don’t think my neighbors even know I’m a writer,” she says.

With plenty of books behind her, she is now shifting her pace. “For years and years and years, I wrote a book every year,” she says. “Now I’m taking 2 to 2 1/2 years, with a break in between.” Still she is halfway through her next work of fiction, she says, waving toward an inked-up notepad. “It’s a historical novel about two women, and it’s set in America,” she says, demurring when asked for more detail.

In fact, she’s ready to get back to work, she says, waving goodbye from her front door. “I’ve got writing to do.”