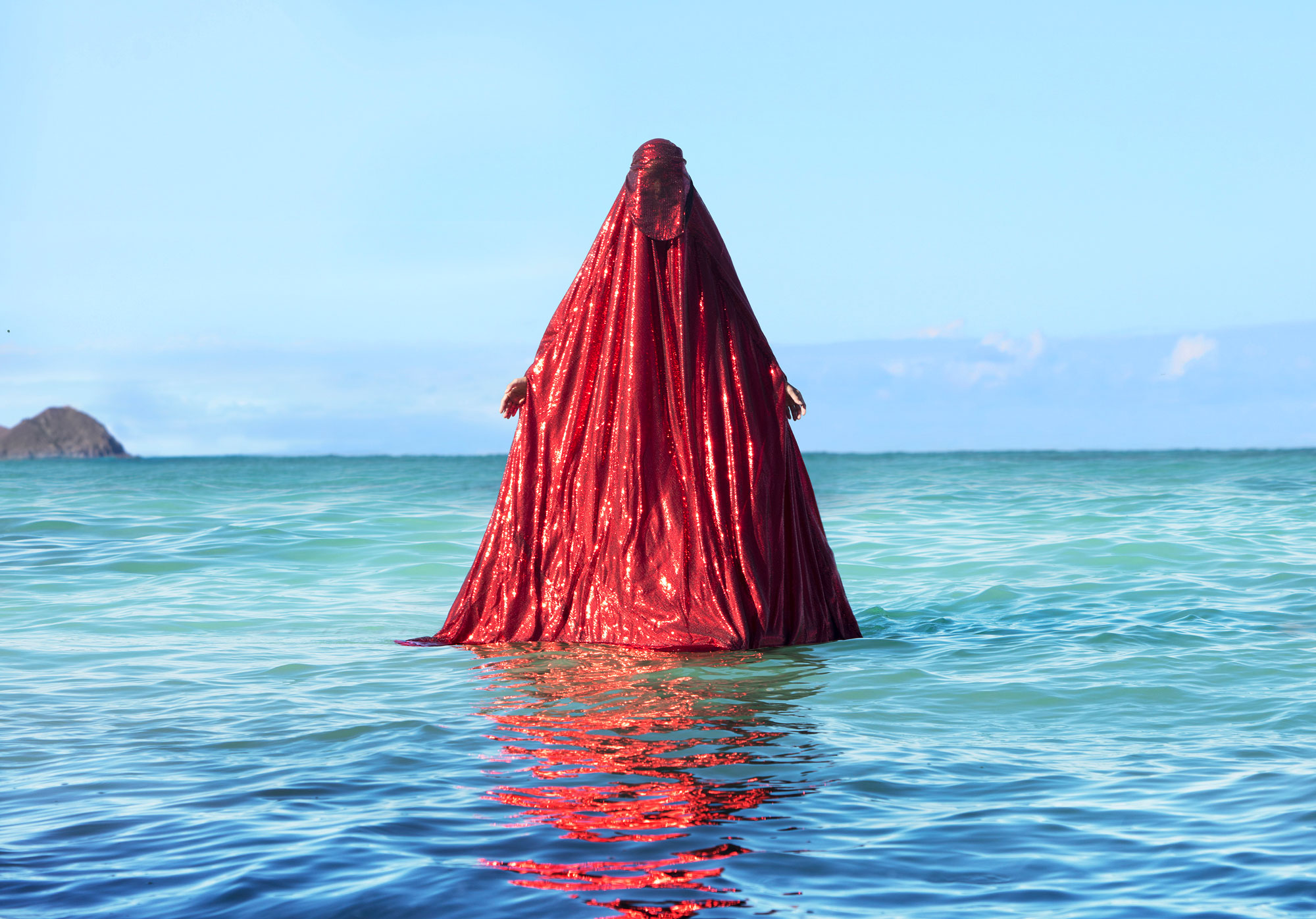 Pictured above: ‘Water Birth, The Red Chador: Genesis I,’ Performance and Concept by Anida Yoeu Ali. Ali is a senior artist in residence at UW Bothell. She shares the story of her work in an episode of “The Blue Suit.”

Shin Yu Pai, a poet and UW museology graduate, ’09, whose creative career has spanned continents and forms, has taken on podcasting as her newest mode of storytelling. In “The Blue Suit,” she explores the stories of cherished everyday objects from Americans who were children of the Asian diaspora. The objects include plants, miso, a piece of vitrified glass and, as you might expect, a blue suit.

The show, which is produced through KUOW and edited by Jim Gates, started broadcasting in July. In an early episode, Pai introduces one of her own beloved objects, a favorite childhood toy in the form of a 1974 stuffed animal, a Dakin Drooper dog she once carried everywhere and that her mother often lovingly repaired. The stuffed animal is a reminder of the good parts of her childhood, of being raised by immigrant parents who took pains to make her feel safe and loved. 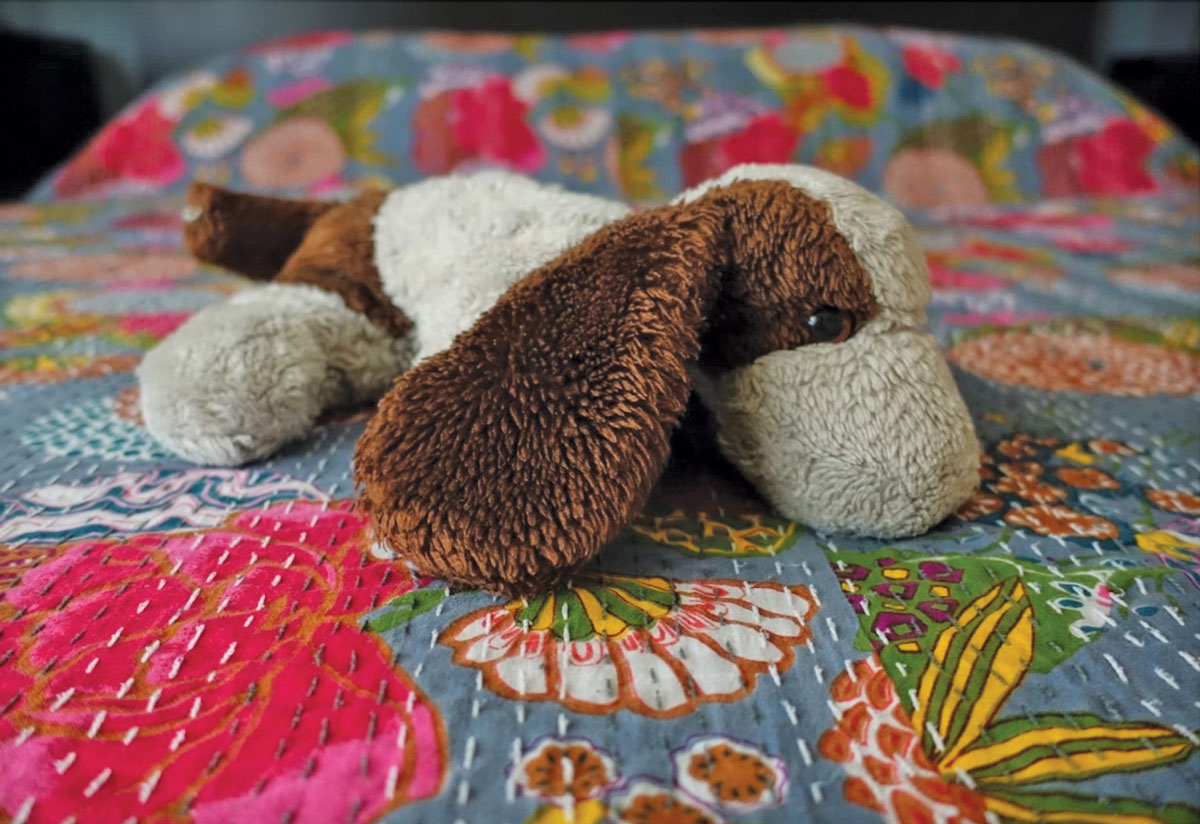 A tattered Dakin Drooper stuffed dog is the focus of Shin Yu Pai’s personal story about love, memory and being the child of immigrants.

While the podcast’s objects are commonplace, they’re imbued with deeper meanings. In another episode, a plant becomes a way for Jessica Rubenacker, ’09, to connect with a sick friend at a time of social distancing. “Some plants, when they are under severe stress, will flower. It’s like their last-ditch effort to continue on,” says Rubenacker. She went into her pandemic-closed office—she is exhibit director at the Wing Luke Museum—to retrieve plants left behind by a friend who was hospitalized. “I’d never seen so many flowers on a hoya carnosa [also known as a porcelain flower],” she says. It seemed like a beautiful but terrible omen. “We weren’t sure if [the coworker] was going to make it,” she tells Pai, her voice dropping low. Rubenacker decided that saving the plant would be her way of fighting for her friend’s life—if the plant survived, hopefully her friend would too. And it did. And she did.

Another episode focuses on a chador, a full-body cloak worn by some Muslim women. This particular chador is red and covered with sequins, a creation of Anida Yoeu Ali, now a teacher and artist in residence at UW Bothell. The story of Ali’s performance art explores the concept of clothes and identity.

The chador’s story starts with Ali’s preparing to participate in an art exhibit in France where the burqa is banned by the government. Ali, a Muslim woman with Cambodian roots, knew her participation in the exhibit would involve a covering. She created one that was hard to miss—bright, sparkling and provocative. Her performance involved wearing the “Red Chador” in spaces where she could be seen. The chadors are extensions of identity and ancestry.

Ali walked through Paris, visiting landmarks and stopping on corners, often touching her heart before extending both hands to others. People she encountered reciprocated. “They do see me, and they’re acknowledging this moment of exchange,” she tells Pai. The message of the chador is one of unapologetic Muslim identity, she explains. In some people it stirred anger or confusion, in others it brought smiles and sincerity. In herself, “it brings out a playfulness and a joyfulness,” she says.

Another episode focused on taste, smell and memory. Tomo Nakayama, a Seattle musician who studied at the UW in the 1990s, took up cooking in the early days of the pandemic to cope with the loss of live audiences. For him, the smell of miso is an avenue to a different place and time: the umami in the air of his birthplace, Kochi, Japan. “Umami … uh, what is umami?” he says, laughing, struggling to think of a direct translation in his conversation with Pai. He decides it is the depth of flavor, the complexity, “the thing that lingers on your tastebuds.” 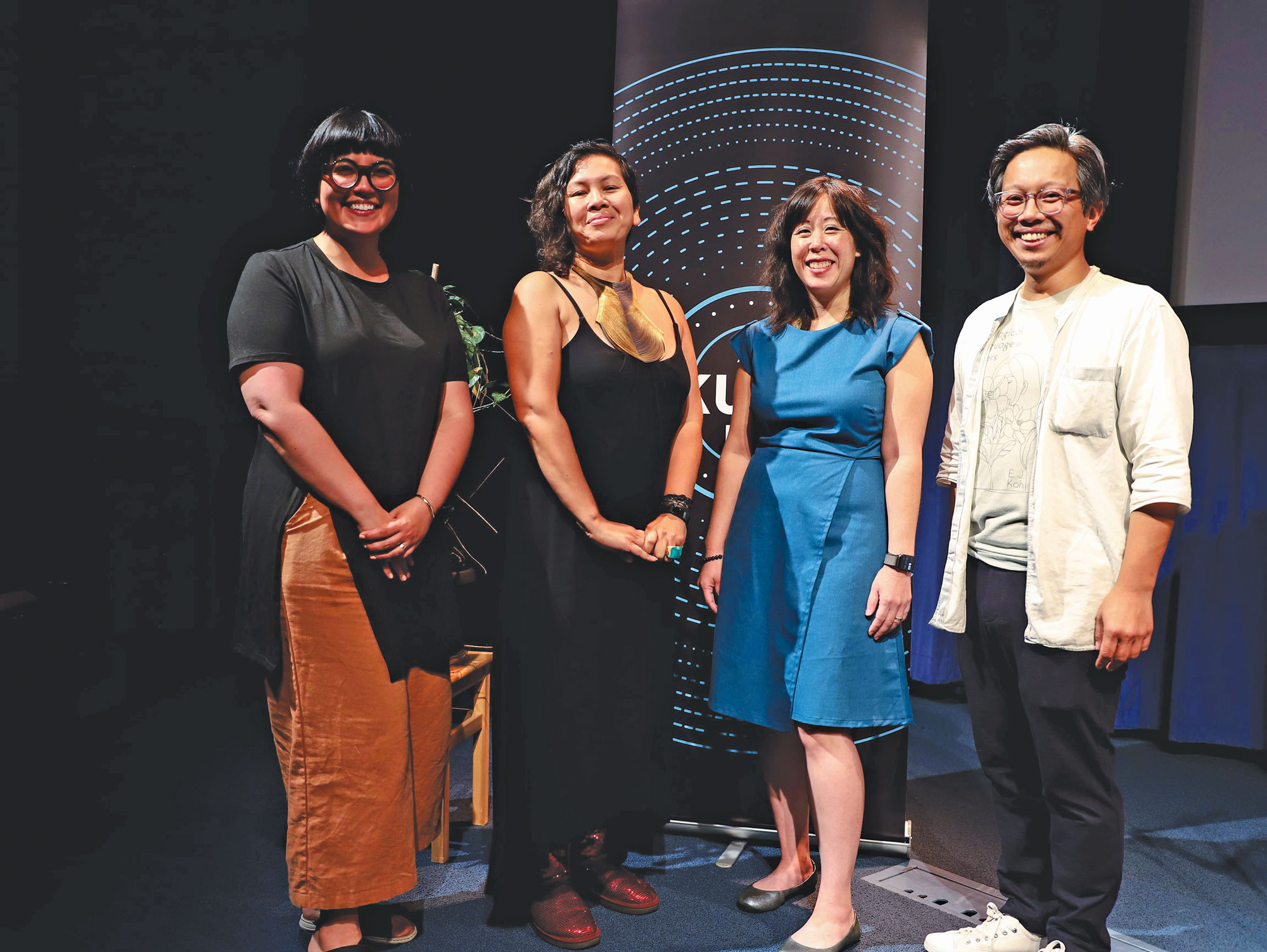 Nakayama grew up in the U.S. and often woke to the smell of miso. He contrasted this with how he felt at school when his classmates would turn up their noses at the unfamiliar smell of his homemade lunch. Now, the scent makes Nakayama long for the home of his childhood.

Sometimes the objects Pai explores with her podcast bring up feelings of homesickness for people who are no longer around. When she speaks with composer Byron Au Yong, ’96, she learns about the paper objects he made with his father’s materials. Helping care for his ailing father, Au Yong started making folded art out of old business magazines, insurance paperwork, and chemistry and engineering textbooks. He saw layers of his father’s identity in the pages. They were things his father had touched and held many times; that itself was sacred to Au Yong and worth preserving.

The impetus for the podcast came about in the greater context of the pandemic, as Asian Americans—like everyone—faced prolific disease, disability and death, Pai says. Then members of America’s Asian communities experienced a spike in violent racism, as President Trump and other high-profile leaders referred to COVID-19 as “the Chinese virus” and “kung flu.”

Pai says the objects she highlights are really lures to get people to listen to and normalize the stories of Asian Americans. “The objects aren’t the point,” she explains. “The point is our connections with our past.”

Pai was inspired to make objects the focus of her podcast after she saw viral photos of Rep. Andy Kim, D-N.J., on his hands and knees, cleaning up debris in the Capitol rotunda after the Jan. 6, 2021 riot.

Kim, a child of Korean immigrants, had bought a blue suit on sale at J. Crew to wear during the certification the presidential election results. Instead, after barricading in his office with his staff for eight hours as they waited for the riot to end and the Capitol Building to be secured, he walked back to the Rotunda filled with broken glass, garbage, bottles and cigarettes people had put out on statues. “I felt my heart breaking,” he told Pai. He found a roll of trash bags, got down on his knees and spent the next hour and a half cleaning up the debris.

He wore the suit again a week later—to vote for the impeachment of Trump—dust still on his trousers.

The suit later found a home in the Smithsonian National Museum of American History, which was collecting artifacts from that infamous day. At first, Kim had wanted to throw it away. “It just brought back such terrible memories.” He recalls the Confederate flags brought into the Capitol that day—a symbol of slavery and white supremacy that had never before been inside the building. “What does it mean to be American right now?” he asks Pai. But now he sees the value in giving the garment to the museum.

When they’re older he hopes to take his sons to visit the suit and tell them, “When something you love is broken, you fix it.”

The eight-episode first season of “The Blue Suit” is available from KUOW, NPR.com and Apple Podcasts.