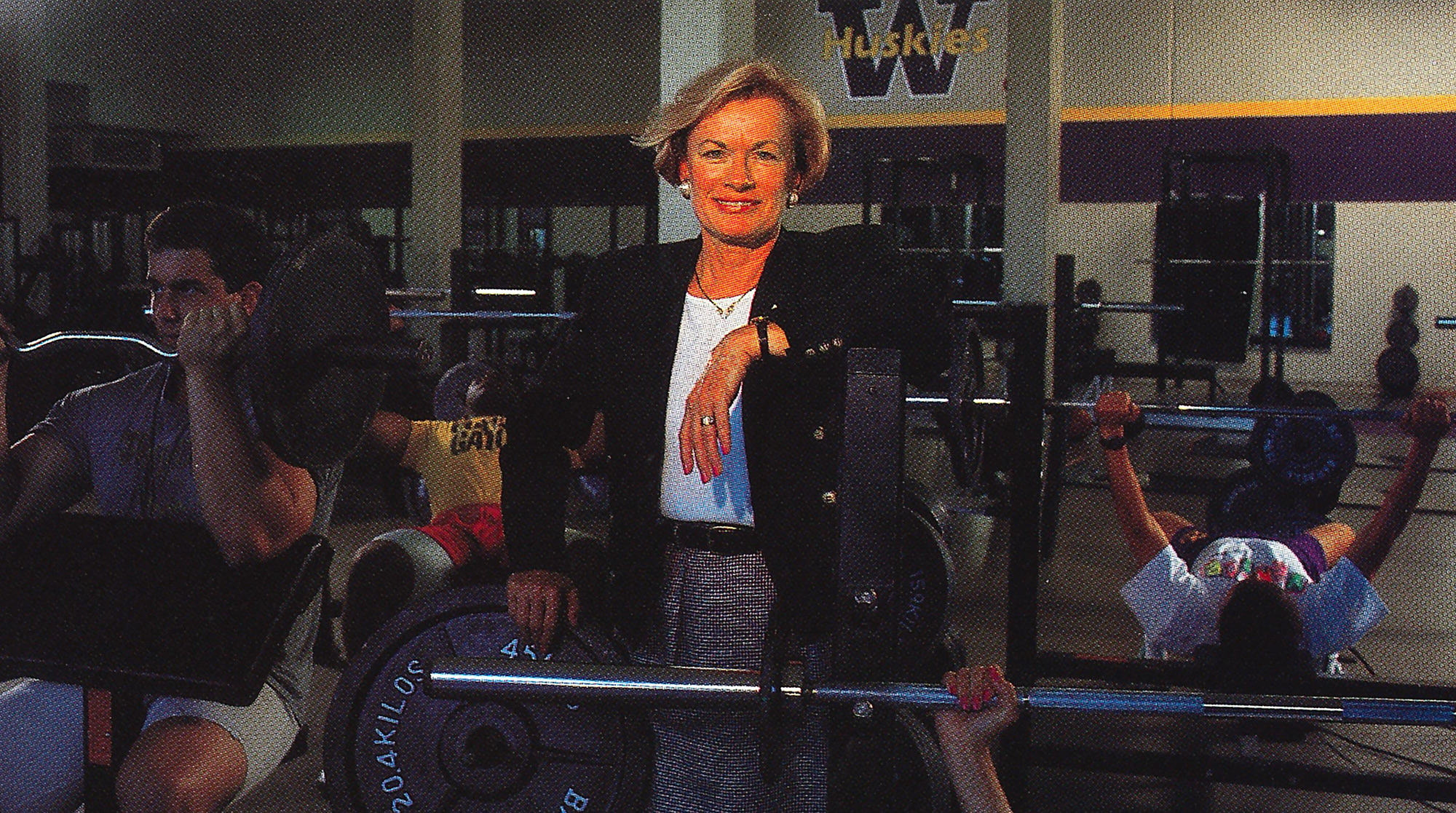 Imagine if you will, the new UW athletic director—all 5' 4" of her, and weighing about as much as a bunch of wet gym towels—as she sprints down the football field and brings down some Pac-10 football giant.

Hard to picture? Don’t worry—you won’t have to. Because Barbara Hedges, 53, a petite blond with an elegant style, doesn’t intend to run down the field and tackle anyone, any more than she intends to tell Don James how to coach his winning football team. She wants everyone to get that straight from the beginning.

What she does intend to tackle are the real tasks of her new job, and she fully expects to excel at those, just as she’s excelled at everything else she’s ever attempted in her career in sports.

Hedges is a 17-year veteran of the USC program, and at the time of her departure was in charge of 17 sports, everything except football, baseball and men’s basketball.

“One of my highest priorities will be the academic area.”

She came up through the ranks, from teaching high school P.E. in Colorado, to coaching and teaching gymnastics at Carey Junior High in Cheyenne, Wyo., to being a professor of physical education in Arizona. Along the way, she earned her B.A. from Arizona State and her M.A. from Arizona.

But behind the impressive resume, the gender issue hangs in the air. Some wait to see if she’ll be the first female to succeed at the job of heading an NCAA Division I program that includes football, or the second to fail. “Barbara, being an astute person,” says USC Athletic Director Mike McGee, “will understand that there will be a little give and take on her part as well as with those with whom she’s working.”

Reflecting on college sports, he adds, “Gender makes no difference. Most people in athletics have been slow to come to that point, but most people have.”

Can a woman deal with the macho coaches, the rabid alumni, and the suspicious faculty and administrators who all have a stake in college sports? “I’m probably not as easygoing as I appear,” she confesses, “because I definitely am very success-oriented. I want to be successful personally, and I want the programs that I direct to be successful.”

Hedges wants to concentrate on issues of substance at UW. She feels the top concerns of the ’90s in intercollegiate sports are cost containment and academic integrity. As have other universities, the UW has been criticized for the poor graduation rates of many of its student-athletes. USC had similar rates, so Hedges is no stranger to the problem.

“One of my highest priorities will be the academic area,” she insists. She wants to help fulfill the educational promise that a university makes to its athletes when it recruits them. Hedges feels the department must confront the problem using preventative measures, rather than acting in a crisis mode.

Hedges’ values stem from a strong family background forged in adversity. Her mother died when she was just a year old and her father, who owned a service station, kept his family of nine children together when other men might have farmed them out.

“He was a tremendous influence in my life,” she says quietly. “He valued education—he was there all the time and was very interested in my sports career.”

Growing up in the small town of Glendale, Ariz., it was natural to go across the street to the grammar school to play ball. Hedges says there were a lot of opportunities for young girls to compete in sports when she was growing up. She started in softball, then moved on to tennis in college, and later taught gymnastics. These days she labels herself an “OK” skier—a talent she uses when they visit their condo in Sun Valley, Idaho. But it’s really golf that’s become her Number One sport now.

Off the playing fields and golf courses, Hedges has a reputation as an outstanding fund raiser. Naturally enthusiastic with an outgoing personality, her smile can light up a room. But she is also known for her attention to small details, and some of her USC staff could be heard affectionately calling her “Miss Priss.” McGee says he will probably have to hire a whole committee to handle the job she did alone.

Some say it took guts for UW to become only the second Division I school to name a woman as athletic director. (The first was San Diego State’s Mary Alice Hill, who was hired in 1983 and fired two years later.) Others will tell you it was plain common sense to pick Hedges. She was named number 40 in the L.A. Times list of the 100 most influential sportspeople last year. Not sports­women—sportspeople.

“She's going to have you run an extra mile and you'll not even know it.”

“It was an honor,” Hedges says, with characteristic humility. “I was totally shocked and very pleased.”

Hedges came to USC during legendary football coach John McKay’s tenure as athletic director 17 years ago. McKay traveled 3,000 miles to honor her this past summer at USC’s goodbye luncheon.

According to current USC Football Coach Larry Smith, Hedges is a great motivator and team-oriented administrator. “She’s going to have you run an extra mile and you’ll not even know it,” he laughs, “or you’ll enjoy doing it, and you didn’t even know you were doing it.”

Smith concedes he could see Hedges back in town around Rose Bowl time, wearing purple and gold instead of cardinal and gold. “It’s a big battle to keep them out of here,” he says.

Hedges becomes serious when she talks about football. “I not only understand the game of football, I understand the importance of football,” she says. It’s no secret that the UW sports program is a financial success because of football. Football ticket revenue generates enough cash to cover most of the cost of 22 other men’s and women’s sports.

But Hedges puts a high value on other sports, too. She believes a balanced program benefits everyone. Coaches of the “minor” sports at USC will tell you she made them feel just as important as Football Coach Smith.

Cathy Bright, USC’s women’s golf coach, has worked with Hedges for 10 years. She says Hedges pulled the women’s athletic department together and turned what had been “clubs” into real championship teams.

“She’s dealt with some very, very high-powered men,” says Bright, and can hold her own. “She’s very fair, and she listens.”

Those who know her best says she has a heart, but she’s not afraid to take a stand or make a tough decision. The biggest problem she might encounter, says Bright, is when a coach leaves. “She’s a family-oriented person and would like her coaches to be able to stay forever. She takes it personally and cares about it.”

Dave Nesbit, USC’s women’s crew coach, seconds Bright’s opinion. Nesbit was an undergraduate at the UW from 1980-85 and was a coaching intern with the men’s freshman and varsity crews. “She really cared about the (USC) crew and she wanted to see things happen,” says Nesbit.

Hedges will have to live with the fact that her stylish clothes and elegant, yet slightly sassy, hair style might be mentioned in the press for a while, whereas former AD Mike Lude’s coiffure was never brought up. But those stories will evaporate when fans and the public find out she can deliver the goods. There’s not one person to be found in Southern California who doubts that, including UW alumni who pepper the area.

George Strugar, a UW linebacker from the ’50s, and his wife, Jan, played golf at the San Gabriel Country Club with the Hedges. “I’ve gotten 30 phone calls saying we stole a good one from USC,” says Strugar. “Every time I mention her name people just rave about her.”

Jim Kenyon, a Southern California developer and Tyee member, is another strong supporter. “I don’t know anybody who criticizes her,” says Kenyon. “Even the typical, pardon the expression, ‘stuffed shirt SC alum’ supports Barbara.”

Hedges and her husband of 34 years, John, are eager to become part of Seattle’s landscape. John and Barbara have known each other since sixth grade and were high school sweethearts. They have two grown sons, Greg and Mark. They’ve leased a house in the Washington Park area, not far from the University. They’ve already sampled the symphony in Seattle and are excited about the city.

It was just a coincidence that John recently sold his manufacturing business, giving him the freedom to relocate. Most of their lives they’ve lived where his job took them. Now that Barbara has landed this plum, he’s happy to make the move for her career.

“She’s not overly excited about reports in the paper,” says John, referring to the deluge of articles, many of them obliquely questioning a woman’s ability to handle a top AD position. “She’s not easily flustered. She has good instincts as far as people are concerned. She can judge people fairly quickly and picks up on a lot of things others miss.”

Some have called her a “tough cookie with a soft center.” John counters, “She’s a tough cookie all the way through!”

What They Said About Hedges …

“She’s a very capable person. There are a lot of capable women in leadership roles, so I don’t think gender has much to do with it.” —UW Football Coach Don James

“I am confident the Hedges era will be successful, innovative and a source of pride and pleasure for the University of Washington.” —UW President William P Gerberding

“She’s a talented woman with no experience administering football, men’s basketball and baseball, and hasn’t had experience managing that kind of department. It’s going to be tough. She may struggle, but she has talent. Hopefully the University will back her.” —Former UW Athletic Director Mike Lude

“Barbara was chosen for her capabilities, experience and enthusiasm for the job. Her sense of grace and class will only enhance these qualities.” —UWAA Past President Sally Jarvis, a member of the athletic director search committee

“As far as being a woman in an athletic department, Barbara has what it takes.” —UW Women’s Basketball Coach Chris Gobrecht

“She could be considered the most significant figure in intercollegiate athletics today, toward the goal of even greater involvement and opportunity for women.” —Seattle Post-Intelligencer Sports Columnist John Owen

“Some, including her, bristle at the suggestion she is a gamble to succeed at Washington. Believe me, when you’ve never been an athletic director before, you’re a gamble. Male or female.” —Seattle Times Sports Columnist Blaine Newnham

Christine Sinrud Shade is a Los Angeles freelancer and a writer for the USC faculty/staff weekly.