Beyond the confines of campus

A faculty leader shares her view of the future.

In July, 2017, Thaïsa Way set out with her daughter to climb Mount Rainier. Several days and 9,000 vertical feet later, they stood together atop the 14,411-foot summit.

At such heights, views verge on the otherworldly, but in that moment, Way says she’d never felt more grounded. After a decade as a historian and professor of landscape architecture at the UW College of Built Environments, she had just about mastered the long view from every conceivable vantage point.

Now that she has summited Rainier, the peak-bagging bug is behind her, and she is looking toward the future in her role as chair of the Faculty Senate. Looking forward, Way says, the senate will address challenges of diversity and difference, academic freedom, and the role of the public university in the 21st century. “President Ana Mari Cauce talks about being the No. 1 university for impact. That, to me, is what a public university should be doing,” she says. “So, as faculty, how do we make sure we do that in all the different ways we can engage?”

Way has addressed this question in her other roles at the UW. As founding director of Urban@UW, she leads an interdisciplinary effort to tackle city issues through research, teaching and community collaboration. She is also on the team leading the Population Health Initiative and a member of the steering committee for the eScience Institute (a hub of data-intensive discovery at the UW) and the newly launched EarthLab in the College of the Environment. 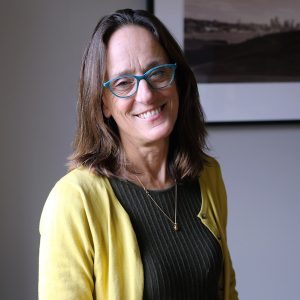 Way uses her own scholarship on feminist histories of design—particularly the role of women as professionals and practitioners—to frame questions about how landscapes foster human and environmental well-being. This, in her view, is at the core of the University’s public mission. “What a campus is, what it looks like, and how one experiences it actually matters,” Way says. Universities have the ability to create spaces that spark inquiry, exploration and shared learning within a wider community. However, Way cautions, campus spaces can only serve as a catalyst for healthful, human impact when the professors and scientists make time to share their expertise with community and civic leaders.

The call for University engagement on community issues hasn’t always been so strong. When the UW moved from Seattle’s city center in 1895 to a distant hill north of downtown, the theory was that universities should separate from their cities so students might learn in a more enclosed environment—or, as Way says, be “sequestered, but inspired.”

But as time transforms landscapes, it also changes perspectives. “We no longer think of students coming here and hiding from life to get educated,” Way says. “Over the last 50 years, we’ve expanded what it means to be attentive to human health and well-being; as an institution, we better understand the importance of being engaged in the city, our communities, thinking about work and life.”

That shift in views is reflected on the UW’s campuses today. Way points to UW Tacoma’s “totally immersive” idea of an urban campus and to UW Bothell’s integration of a suburban setting with proximate woodland and wetland as “fantastic examples” of more fully realized landscapes.

She also cites the demolition of walls at the edge of campus and the construction of the new Burke Museum along 15th Avenue as signs of how the University’s public-seeking spirit is manifesting beyond traditional campus confines. “Those are really important moves,” Way says. ”It says to the public: We are a public university and this is public land.”

From Way’s point of view, the campuses we form shape the kind of university we are. “I firmly believe we’re shaped by the places we’re in—and the places we have access to.”

Matthew Leib is the web editor and visual producer at The Whole U.