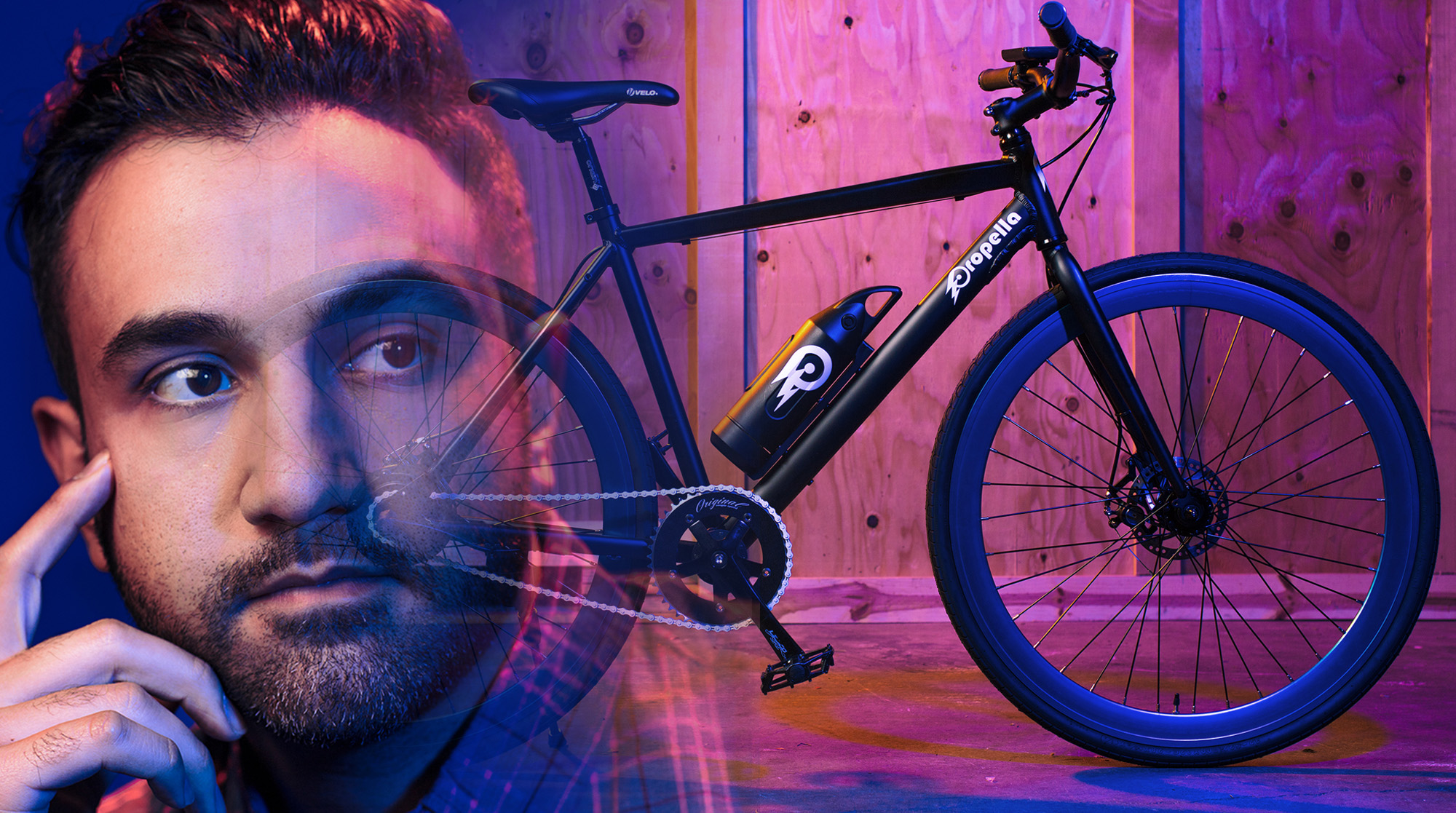 Electric bike on a budget: Seattle startup aims for sweet spot between DIY and $$$

Behyad Ben Tarassoli, ’11, quit his engineering job to break into the burgeoning world of e-bikes. His lightweight, sleek and relatively cheap two-wheeler has all the signs of a smash hit. So when can we start riding it?

It’s 9 p.m. on a Wednesday and Behyad Ben Tarassoli is working alone in a Redmond warehouse. With a heavy-duty tape dispenser in hand, he seals the top of a five-foot-long package marked “FRAGILE" and slides it toward a loading dock. "This one's going out tomorrow," he says, glancing at the shipping label: "To Chris in Florida."

Tarassoli is the founder and CEO—and only full-time employee—of Propella, a Seattle startup that sells electric bikes, or e-bikes. That means he does the research and design, the customer service and the box-taping, whether it’s day or night. “Sometimes I’m here as late as 1 a.m.,” he says. “It helps when you don’t have to get up in the morning.”

In a few days, Chris in Florida will receive a matte black e-bike with colorful blue wheels. The stripped-down, lightweight design won’t look like an advanced piece of technology when it rolls out of the package. But once Chris starts pedaling, he’ll feel just how powerful this product is.

The bike’s battery, which is disguised as a water bottle, powers a motor in the hub of the rear wheel, rotating the wheel faster with each pedal and propelling the bike up to 17 miles per hour. It’s not a moped: It won’t move if it’s not pedaled first, and it can still be ridden without the battery.

E-bikes can be purchased from a company like Propella or made at home by adding a do-it-yourself motor to a normal bike. A common sight in Europe, they’ve steadily gained an American audience in recent years, attracting city dwellers with a short commute, parents towing kids in a bike trailer and people who live in hilly neighborhoods.

It’s hard to explain the experience of an e-bike to someone who hasn’t ridden one. At a high speed, the motor does half the work for you, but since you still have to pedal, the illusion is that you’re actually doing all of the work—like you’ve suddenly become Tour-de-France good at riding a bike, without breaking a sweat.

“A lot of people smile or laugh when they ride an e-bike for the first time,” says Tarassoli, 29. When that giddiness fades, a real appreciation for the efficiency takes over: An e-bike could be a viable form of green transportation for people who otherwise wouldn’t think of a bike for transportation.

Yet due to the steep prices of name-brand e-bikes and the wonkiness of the do-it-yourself kits, the industry’s customer base is largely made up of enthusiasts. But that beginning to change thanks to companies like Propella.

Tarassoli’s bikes, which are for now sold exclusively through limited-batch releases online, cost between $1,000 to $1,300, which is on the lower end of the market. An entry-level bike at a Seattle shop, such as Gregg’s Cycle in Green Lake, costs between $2,300 to $2,800. A top-of-the-line rig can be more than $13,000. Some companies peddle bare-bones e-bikes for as low as $500-$700, but their rudimentary design tends to be bulky and offer stiff handling. Being chic and relatively cheap isn’t all Propella offers. Whether an e-bike costs $500 or $5,000, it most likely weighs at least 50 to 60 pounds. A Propella e-bike weighs only 35, thanks to an ultra-efficient lithium battery (it’s similar to what Tesla used before developing their own power source). Imagine that 20-pound difference when lugging a bike up a flight of stairs.

Established brands charge a premium for featherweight models like this. That’s the sweet spot Propella has targeted, and that’s why the first two models sold out on the crowdfunding site Indiegogo, where Tarassoli hawked 110 bikes in 2016 and 100 more in this fall.

Derek Markham writes about e-bikes and green transportation for the sustainability news site Treehugger. He has called Propella “the entry-level electric bicycle we’ve been waiting for.”

Markham believes the bike can position itself nicely in the nascent industry. “Propella looks well-suited to those who might benefit from the extra boost of an electric drive but who wouldn’t be caught dead riding a stodgy and heavy e-bike,” he says. Likewise, Markham says the simplicity may be a relief to people “who don’t want or need all the ‘bells and whistles’ that are often featured on today’s overly complex and app-connected e-bikes.”

After graduating with a degree in civil and structural engineering, Tarassoli worked as a civil engineer on the Alaskan Way Viaduct and then at a firm in Bellevue. He liked the work, but an entrepreneurial spirit brewed inside of him. At night, he watched videos about how to start a business, how to brand a product, and how to build a customer base. Meanwhile, he became enamored with e-bikes and saw a gap in the market. Where were the e-bikes that looked great, felt like regular bikes, and didn’t break the bank?

When Tarassoli started his company in 2015, his aim was two-part: ditch the unnecessary stuff, like bulky wheels and glitzy tech, and stick to the basics. The company’s slogan became “A great electric bike must be a great bike in the first place.”

With the help of a friend who’s also an engineer and a bike junkie, Tarassoli designed a prototype. Like many founders who build lean startups while focusing on product development, Tarassoli found vital support in freelancers and contractor employees.

Through a long series of Skype conversations, he arranged to have the frames assembled at a factory in China. The first round of sales took place in 2016 and things began to take off after he was featured in GeekWire.

“Always remember that it's still a bike, with a boost of power. Or, you could say it's a bicycle modernized with technology.”

A survey of the current e-bike market confirms that Propella seems primed to occupy a sweet spot between building your own and buying one for the price of a car. Based on the eye test alone, Tarassoli’s designs seem much closer to top-tier brands than to budget options. But living in a sweet spot can also get a company squeezed out of business. What if DIY packs become simple enough for the average person, and big companies drop their prices?

Tarassoli’s not worried. He thinks DIY packs are still 5 to 10 years away from being commonplace, and he says big companies are moving in the opposite direction of Propella—adding more flashy features and installing bigger, pricier batteries. “The high-power, high-torque, high-speed stuff—that’s a different business,” he says.

Seattle Electric Bike, an e-bike shop in Ballard, sells a suite of bikes ranging from $1,500 to $5,500. Propella would be the cheapest bike in the store. “It fits a niche,” says Brandon Quinn, who works at the shop. “Most people don’t want to spend two or three thousand on a bike. But they’re like, ‘A thousand? I could swing that.’”

Still, Quinn says customers can be hesitant to order a bike online. It’s not unheard for a company to sell 100 bikes and then disappear, he says. But that didn’t worry David Elton, a Seattle bike enthusiast who purchased the latest model of Propella. He found the company on Instagram and liked the stripped-down design and light weight.

“Since Propella had already delivered the first model, I would say as far as startups go, they were of the lower-risk variety,” says Elton, who bought the bike because he lives at the bottom of a steep hill in West Seattle. On the Propella? He glides up it. It’s harder pulling a trailer full of his kids, but still possible. Come spring, Elton aims to ride the bike to Mercer Island for his morning commute.

Tarassoli plans to take Propella mainstream by next year. He recently opened a third round of crowdfunding to finalize the design. Now he’s preparing to court funders and distributors, and he hopes a large dealer like REI might sell his bikes.

No matter where they’re sold, Tarassoli wants his bikes to remain a triple threat: stylish, light and modestly priced.

“We get invited to shows that say, ‘You should come in and sell your bike for $2,000.’ I just say no. I don’t get my motivation for money,” he says. “If I see a lot of these bikes at UW—in different colors, and they’re simple and reliable, and if there’s any trouble we fix it for you right away—that’s what gives me motivation.”