Retired Rear Admiral Bill Center, the recipient of the 2020 Distinguished Alumni Veteran Award, created a legacy of dedication and service to his country and his University. 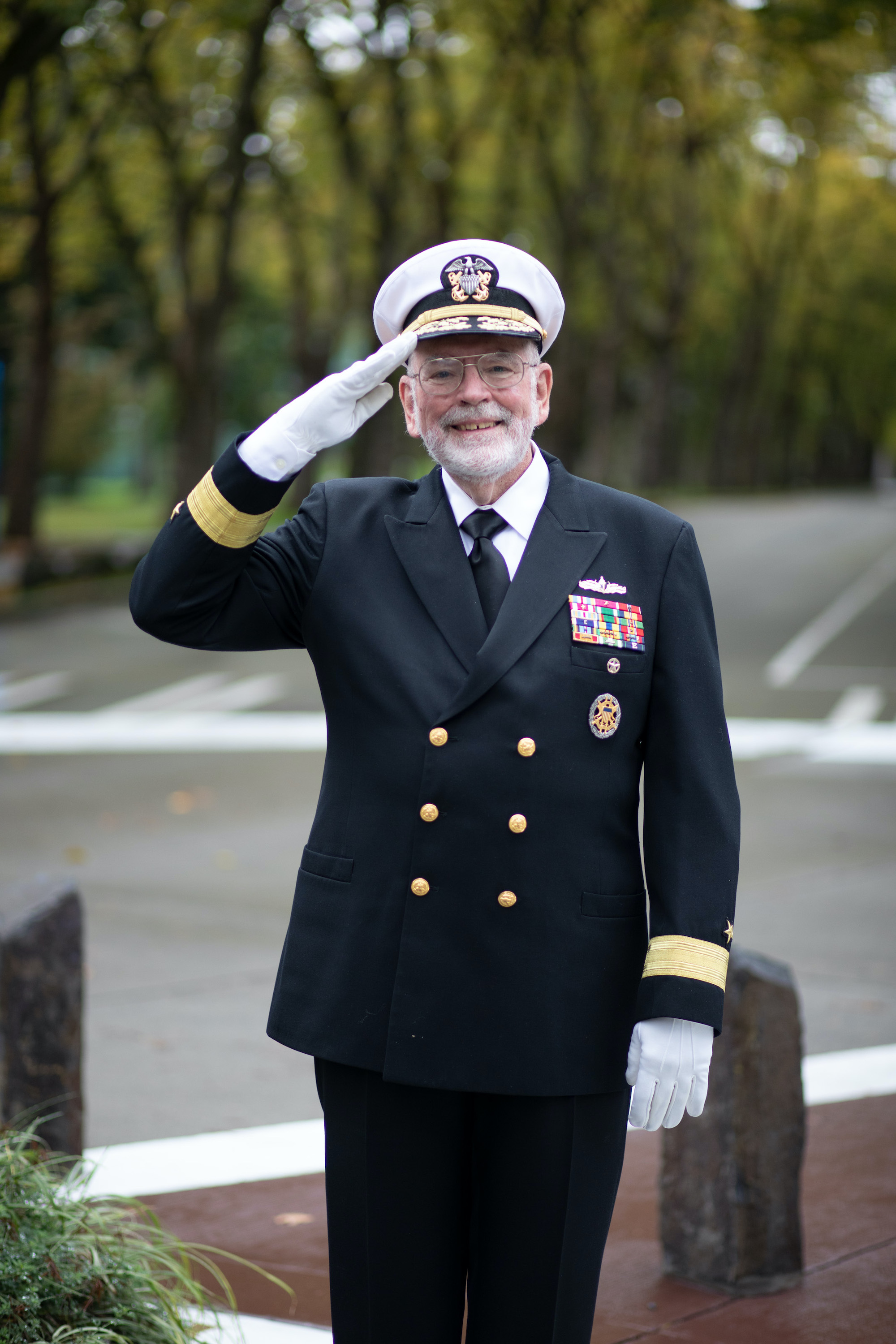 He served in Operation Desert Storm, worked as an arms-control negotiator with the Joint Chiefs of Staff, closed naval bases in California, helped search for the wreckage of Korean Air Lines Flight #007, which was shot down by Russia, and commanded all naval activities in the Pacific Northwest. And that just scratches the surface of Bill Center’s 35 years in the Navy. But his relationship with the University of Washington runs even longer – 45 years long, to be exact.

The Dayton, Ohio, native came to the UW for graduate school in 1976 after he graduated from the U.S. Naval Academy and had served eight years at sea. The Navy gave him the opportunity to go — all expenses paid — to any university he wanted. Much to his colleagues’ surprise, he bypassed Harvard and Stanford and chose to enroll at the Evans School of Public Policy & Governance. He seriously wanted to come to Seattle – and to learn from Brewster Denny, ’45, the legendary founding dean of the Evans School. Center spent nearly two years at the UW, studying public policy and administration, with an emphasis on national security policy planning and organization development. His two-year program ended a bit early because he was such a voracious student that he took too many classes in other areas such as law, physics and anything else. He ended up with many more units than he needed.

“I had a fantastic time with Brewster Denny and became good friends with Marc Lindenberg [dean of the Evans School from 1998 to 2002]. I learned so much and built great relationships with my classmates and professors. My UW education served me extremely well throughout my career in the Navy.” For his service to our nation, the veteran community and the UW community, the UW is honoring Center with the 2020 Distinguished Alumni Veteran Award.

His dream was command at sea and he made good on it quickly. He was the youngest commanding officer in the U.S. Atlantic Fleet when he assumed command of USS Exploit, a minesweeper. He later commanded USS Meyerkord, an anti-submarine frigate, and USS Reeves, a Japan-based guided missile cruiser that made three deployments to the Persian Gulf during the Iran-Iraq War. During Operation Desert Storm, though stationed in the Pentagon, Center was “in the thick of things” as the director of strike and amphibious warfare, meaning “our shop played a role in all the naval bombs and missiles fired at Iraq.” Not long after the war, President Clinton nominated him for promotion to Rear Admiral. His sterling reputation earned him assignment as deputy director for international negotiations for the Joint Chiefs of Staff with special responsibilities for nuclear arms control, non-proliferation and all aspects of political-military relations with Russia and the newly independent states of the former Soviet Union. 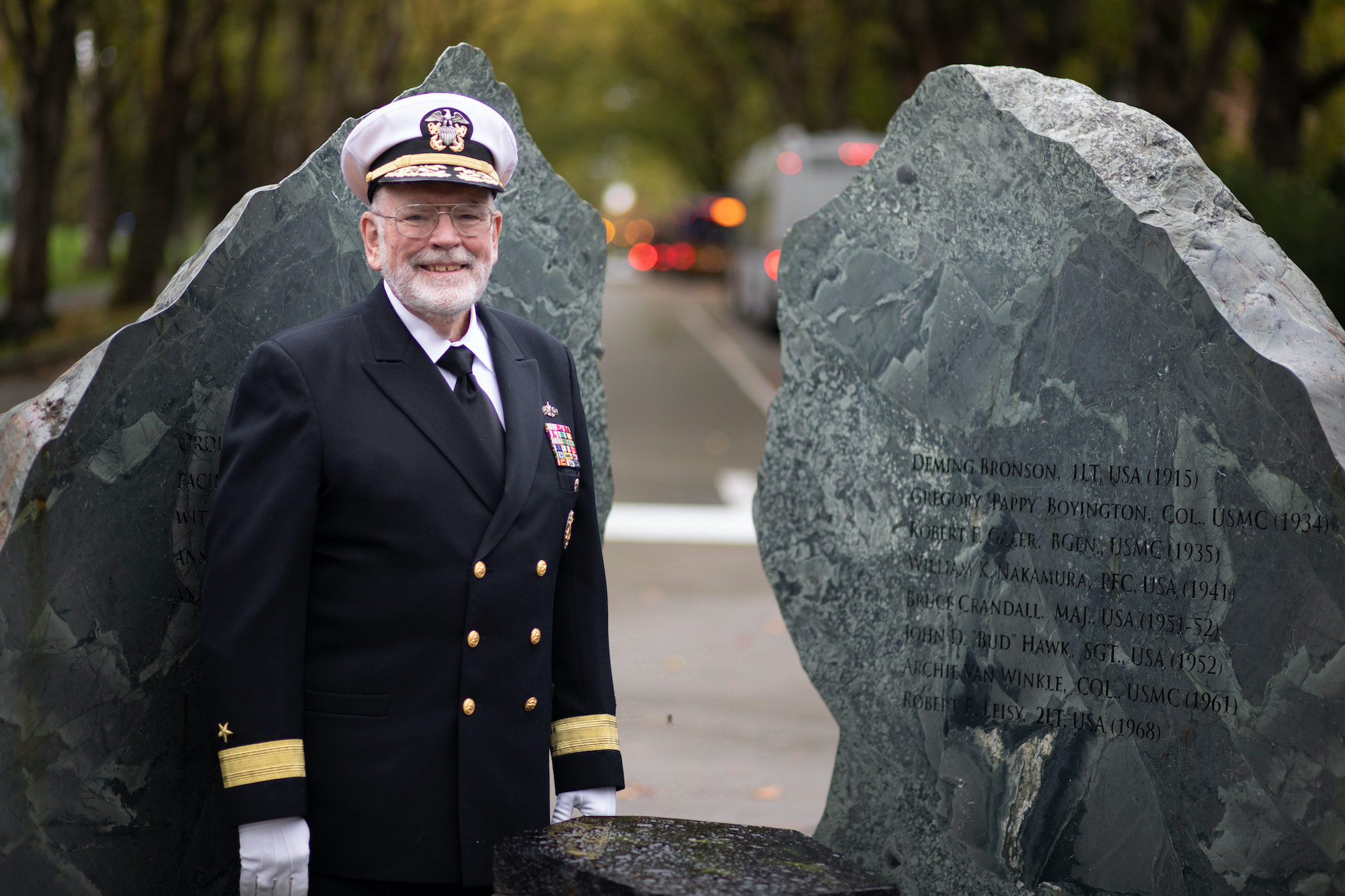 Bill Center poses for a portrait on Memorial Way at the University of Washington campus on October 19, 2020.

Working with the Joint Chiefs “was a dream job,” he recalls. He served America’s top military leaders — Gen. Barry McCaffrey, Gen. Wes Clark, Gen. Colin Powell and Gen. John Shalikashvili, traveled all over the world on diplomatic missions “where I had a front-row seat to history,” says Center.

Center retired in 1999 after commanding the naval activities in the Pacific Northwest. He stayed put in Seattle, and turned his considerable skills and passions to serving his alma mater. While he did take on a post-Navy position as president of the Washington Council on International Trade, he was a beloved and frequent guest lecturer in the Evans School, served as the senior adviser for the school’s Humphrey Fellows program and lectured in the Foster School. The recipient of the Evans School’s Distinguished Alumni Award in 2011, Center’s voracious appetite for community service also led him to serve as president of Seattle Rotary and volunteer to teach leadership at the Lighthouse for the Blind.

“Admiral Bill Center adores the UW, where he regularly volunteers as a speaker and a mentor to students and recent graduates,” says Dorothy Bullitt. “He assists veterans and active-duty members of all of the service branches, both young and old. I know of no one more willing to mentor the young, nor more ready to encourage his fellow leaders.” And, she adds, “He stood out for his moral courage and kindness.”

“I always felt at home on a ship,” Center says. “It was the adventure of a lifetime. It was a privilege to serve my country, and I would do it again. “And my UW education has been with me every step of the way.”

Jon Marmor is the editor of University of Washington Magazine. Anil Kapahi is a freelance photographer in Seattle, Washington.