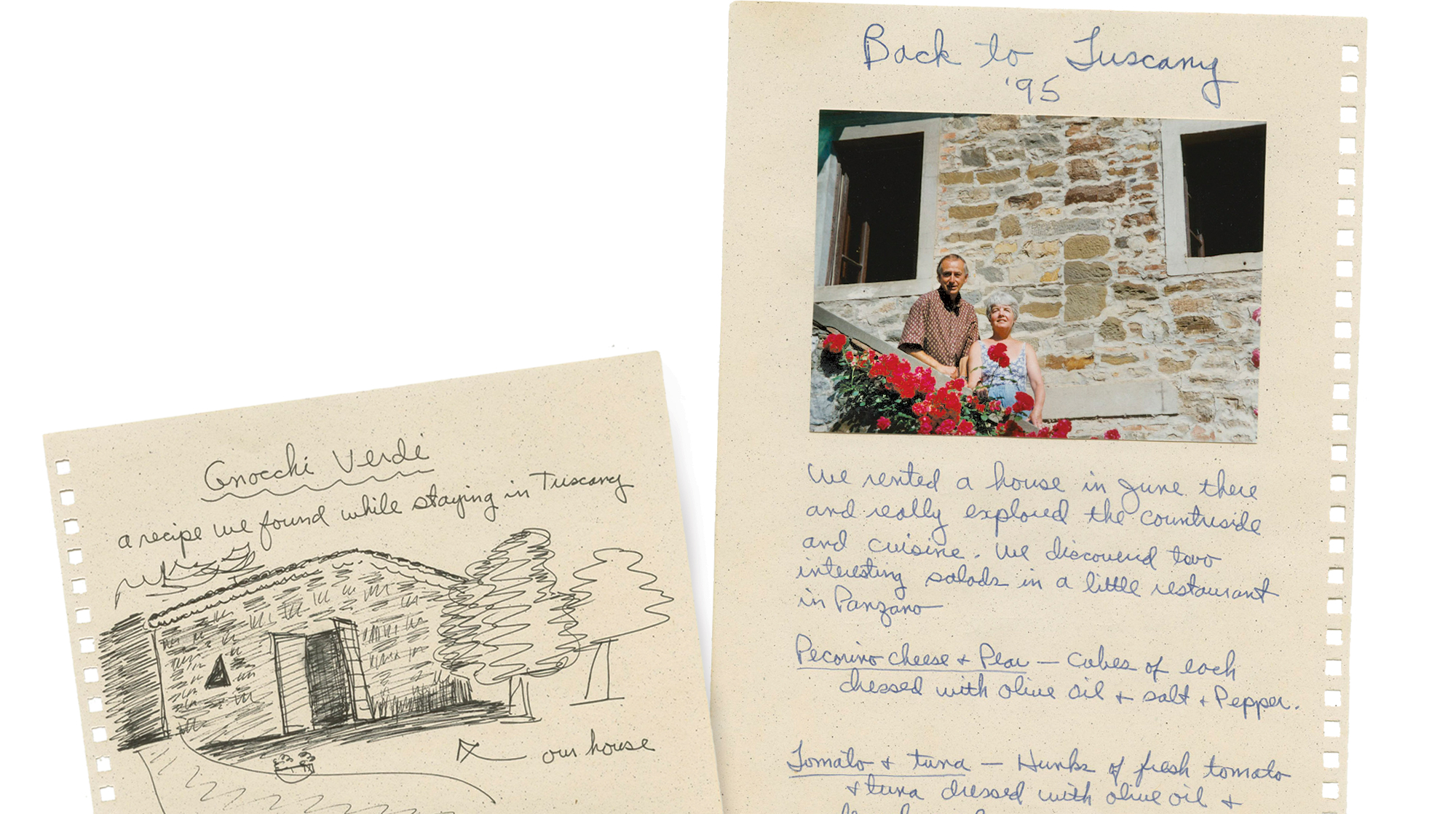 Two decades after Tom Stockley perished in a plane crash, his daughters curate a book of his eating pleasures.

Their two daughters having left the nest, Tom, ’58, and Peggy Stockley, ’59, relocated from their Bellevue home to a domicile that, quite frankly, suited them better—a cozy houseboat on the eastern shore of Lake Union. Painted a bright blue to harmonize with the water that lapped up against the dock and the sky that smiled down upon it, the houseboat soon became a welcoming nexus for neighbors, friends and family to relax over a nice glass of wine and a delicious meal that Tom casually would throw together with fresh ingredients he had gathered from Pike Place Market or other local vendors.

Wine and food, which Tom loved to share with those he loved, defined him both as a man and a professional. A longtime journalist and columnist with The Seattle Times until his death in a plane crash in January 2000, Tom gently pushed the bounds of the town’s provincial palate, introducing his readers to fine wine and good food at a time lutefisk and salmon (usually overcooked) demarcated “local cuisine,” and jugs of Ernest & Julio Gallo or—worse—bottles of Annie Green Springs graced dinner tables. 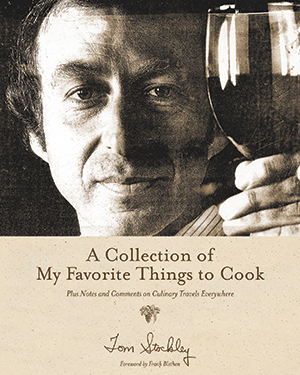 Tom served as critic but mostly delighted as cheerleader of Washington’s fledgling wine industry and champion of Seattle’s burgeoning restaurant culture, earning his legacy as “a powerful inspiration in those early decades (who) would be jubilant at what he helped create.” Those are the words of pioneer Washington winemaker Bob Betz in the introduction of the new book, “A Collection of My Favorite Things to Cook: Plus Notes and Comments on Culinary Travels Everywhere” by Tom Stockley (Copyright 2020 by Paige Stockley and Dina Moreno; Peanut Butter Publishing, Seattle).

The book, artfully curated by the Stockleys’ two daughters, Dina Moreno, ’85, and Paige Stockley, ’83, was released two decades after Tom and Peggy perished at Port Hueneme, Calif., in the crash of Seattle-bound Alaska Airlines Flight 261 from Puerto Vallarta. Better late than never, Dina and Paige have unearthed their father’s oil-stained, handwritten journal of recipes and repurposed it into a book, folding in some of his old columns from The Times and several tributes from his many admirers. The book closes with an afterword penned by Luisa Moreno, ’19, the eldest of Tom and Peggy’s three granddaughters who was only 2 in January 2000. It is not lost on Dina and Paige that the book also is a gift to their girls, a tangible and tactile way for them to relive the glamorous adventures of the grandparents they never got to know.

Fully baked, the book treats us to Tom’s masterful prose—a sweet blend of context, color and character—and allows us to revisit his enviable lifestyle all over again. Rather than relying on bland transcriptions of their father’s recipes, Dina and Paige have filled the 278 pages with photocopied images taken directly from the journal, many of which Tom illustrated with his own fanciful sketches or clippings from magazines. Even the title comes directly from the journal, a hint that maybe he had planned to publish the recipes all along—although likely as something more formal than a collage. 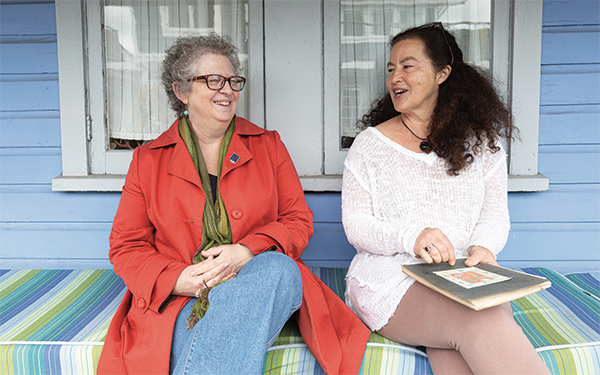 Sisters Dina Moreno, ’85, and Paige Stockley, ’83, enjoy a moment at the family houseboat. 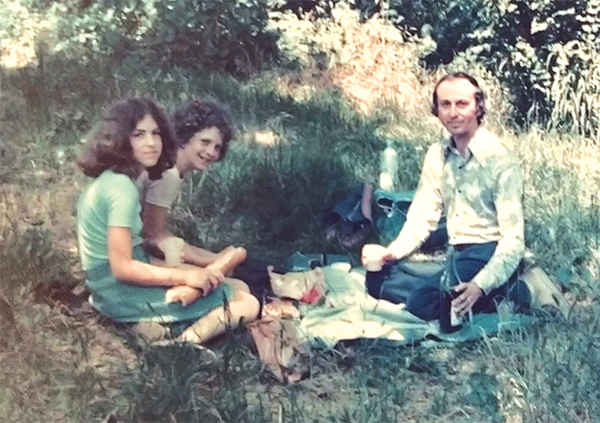 A classic family picnic in France in 1975.

And yet the scrapbook approach taken by the two daughters is pitch perfect, as it speaks to the unfussy nature of a man always searching for the next big thing but wise enough to understand that his Seattle-based audience had no patience for pretense. (In a travel essay, Tom once described Seattle as “a bluff, good-hearted city.”) Dina and Paige didn’t test the recipes before publishing, and they still haven’t tried most of them. (It’s probable Tom had not either.) But based on the feedback the daughters are receiving from initial consumers of the book, the collection of Tom’s favorite things carries more than its substantive weight as a cookbook.

It also stands out as an artifact of Seattle’s culinary history. Tom enjoyed writing about foods that would be novel to his readers, reporting on trends he would pick up through his travels to gastronomic destinations, such as Italy. A modern man of his time, he helped introduce Seattle to pesto, gnocchi and tiramisu. “I would love to know what he would be into now,” Paige says. “At his core, our dad was a journalist. He was educating his readers all the time.”

Since digging in and acquainting themselves with their father’s recipes, Paige and Dina have begun to throw a few of them together in their own kitchens. Like the meals he prepared at the houseboat, Tom’s recipes tend to be uncomplicated yet elegant. The broth for a lobster bisque recipe, which originates from a family of port producers in California’s wine country, is a mixture of canned soup—tomato, green pea and mushroom (I’m not kidding!)—combined with half-and-half and sherry. “I tried it,” Dina says. “And you know, it was surprisingly good.”

The two sisters are both big fans of “son of coconut shrimp,” an appetizer their father described as “a southwestern dish that is hot & creamy all at the same time.” Paige highly recommends pollo con carciofi (chicken with artichokes), a recipe Tom learned from Peter Dow, the former owner and chef of Cafe Juanita in Kirkland. Dina calls out the Moroccan lemon chicken recipe, which her father writes “is great over couscous!” The dish is made with “1/2 cup minced good olives.”

Yes, they have to be good. In case you don’t believe him, Tom has cut out photos of the right types of olives from a magazine and pasted them to the top of his recipe page.

Stuart Eskenazi, ’85, is a frequent contributor to University of Washington Magazine.