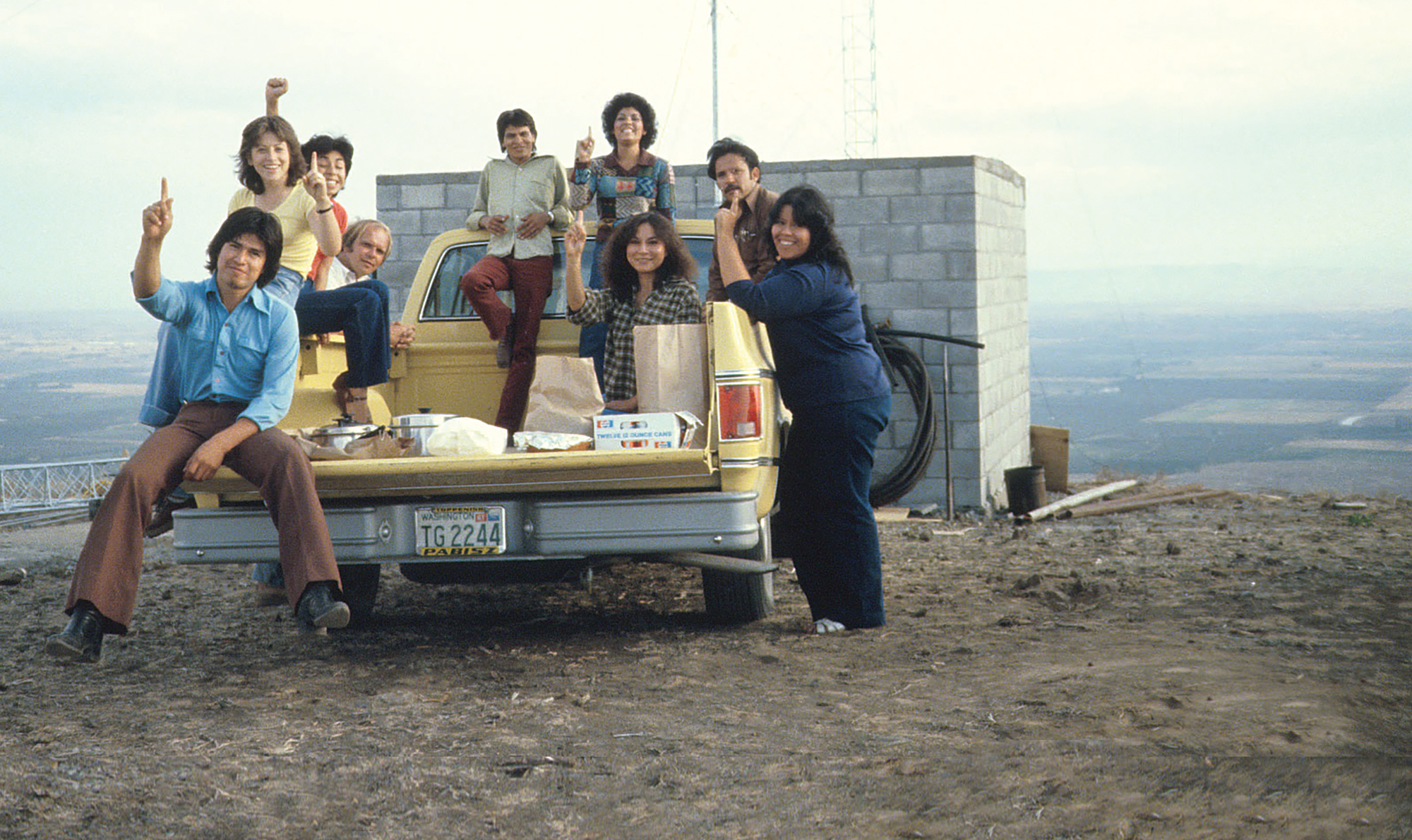 Radio Cadena came on the air in 1979 and became a lifeline for Eastern Washington’s farmworkers. Monica De La Torre, ’16, shares its story in “Feminista Frequencies.”

Excerpted from the book “Feminista Frequencies: Community Building through Radio in the Yakima Valley” by Monica De La Torre, published in spring 2022 by University of Washington Press.

As soon as authorities announced the impending threat of volcanic ash from the eruption of Mount St. Helens on the morning of May 18, 1980, KDNA-FM began broadcasting news of the fiery eruption that killed fifty-seven people and destroyed 250 homes. A mere five months before the eruption, on December 19, 1979, KDNA’s community radio broadcasters had transformed the 91.9 FM dial into one of the first full-time Spanish-language community radio stations in the United States, shifting the airwaves of the Yakima Valley’s agricultural hub into a space where approximately 35,000 Spanish-speaking residents, especially farmworkers, could tune in for the latest emergency responses, news, music, and community-based programming. KDNA’s announcement about the eruption allowed farmworkers, who were out in the fields at 8:39 a.m., when the explosion occurred, to seek safety from the harmful effects of the ash.

Located in Granger, Washington, approximately 85 miles east of Mount St. Helens, KDNA was the only full-time Spanish-language media outlet in the region capable of reporting this catastrophic emergency to the region’s Spanish-speaking farmworker community, which by the early 1980s consisted of both men and women in the fields. Station manager Rosa Ramón and staff acted quickly to start emergency broadcast services transmitting the news that “¡Santa Helena ha eruptado! ¡Vayan a sus casas y sigan escuchando Radio KDNA! (St. Helens has erupted! Go to your homes and stay tuned to KDNA for more information).”

While the transmission on Dec. 19, 1979, was technically KDNA’s first broadcast on its newly licensed designation on the radio dial at 91.9 FM, just a few years earlier a group of Chicana and Chicano community activists, along with two radio producers hailing from Michigan, had begun radio production workshops with farmworker youth. This project created early iterations of Spanish programs that would later become KDNA’s signature broadcasting mix of news, music, and cultural affairs.

Staged alongside the Chicano movement in the Pacific Northwest, KDNA emerged as the leading advocate for farmworkers’ rights in the region.

Radio Cadena—the name given to the project before the designated call letters of KDNA were established in 1979—first started in Lynden, Washington, in 1975 where radio producers Julio César Guerrero and Daniel Robleski (often shortened to Dan Roble) educated farmworker youth in radio production skills—a program sponsored by local community organization Northwest Rural Opportunities (NRO) headed by Ricardo García. Along with the other cofounders, KDNA’s future station manager, Rosa Ramón—who also worked for NRO—recognized early on that access to radio broadcasting would have a significant impact on Mexican migrants and their families, especially women and farmworker youth, navigating new geographies and sociopolitical structures in the area. Soon the training program in Lynden would migrate to Seattle before settling in Granger, where KDNA established its own radio station studio in NRO’s well-known three-story brick building with a former life of its own. Prior to the brick-and-mortar station being established in Granger, Radio Cadena was based in Seattle and transmitted Spanish-language programming with the help of community radio station KRAB FM. Indeed, Radio Cadena’s founders and volunteers tapped into institutional resources and already existing activist networks throughout the Pacific Northwest to successfully launch KDNA 91.9 FM.

The Mount St. Helens incident is just one early example of how Radio Cadena, including its staff and volunteers, served Mexican American and Chicano communities establishing roots in the Pacific Northwest. From educating farmworkers about the harmful effects of pesticides to empowering women to leave situations of domestic violence, KDNA quickly became a tool for community building, advocacy, and entertainment that was especially leveraged by the women who led it. For many of KDNA’s female farmworkers-turned-broadcasters, developing skills in community radio production led to an awakening of personal agency and the brokering of new social relations both inside and outside the recording studio.

The station’s culturally relevant broadcasting, job training in radio production, and maintenance of Mexican and Tejana/o cultural traditions vis-à-vis radio programming and community events all worked to uplift farmworkers and their families, particularly women. The development of Spanish language radio in the Yakima Valley was a tool for community building facilitated by the rise of community-based public broadcasting across the country, alongside Chicano movement activity in the region.

… Staged alongside the Chicano movement in the Pacific Northwest, KDNA emerged as the leading advocate for farmworkers’ rights in the region, especially by encouraging “workers to demand minimum wage, toilets in the field and water to wash pesticides from their hands before lunch. KDNA demands better conditions for migrant workers while keeping their culture alive.” Radio Cadena set out to be a station that provided news, information, and entertainment to Spanish-speaking listeners, while calling on Mexican farmworkers to build community often through direct participation with the radio station. Perhaps it was KDNA’s unique and targeted outreach to farmworkers, often employed under terrible conditions, that worried growers in the region. For example, orchard owners “bombarded the Federal Communications Commission with claims the station was sparking worker rebellion,” as Ricardo García, cofounder and KDNA’s second and longest-serving station manager, recalls. “They realized now that we’re not really inciting or promoting restlessness amongst farmworkers. What we’re all about is information and education.”

Mexican farmworkers in the Yakima Valley who tuned their radios to 91.9 FM woke up to the sounds of musica mexicana—rancheras, boleros, and Tejano music

The intentional public support for farmworker families elevated by KDNA’s radio programming is how the Chicano movement in the Pacific Northwest was heard on the airwaves. For Mexican communities throughout the Yakima Valley, community radio was the platform where listeners congregated on-air in a space that was intentionally created with them as the target audience. Many of Radio Cadena’s founders and broadcasters came from farmworker backgrounds, often with direct experiences and memories of working in the fields as children and young adults. KDNA’s programming was driven by an awareness that community radio became a life-sustaining tool for farmworker communities across the Yakima Valley who were often exposed to pesticides while working in the fields.

While there were also efforts to launch Spanish-language public service television programming and Spanish-language newspapers in the Yakima Valley, Radio Cadena was unmatched in its reach and popularity with Spanish-speaking listeners. … Mexican farmworkers in the Yakima Valley who tuned their radios to 91.9 FM woke up to the sounds of musica mexicana—rancheras, boleros, and Tejano music—their transistor radio speakers blaring accordions, brass horns, and strings, perhaps transporting them back to the Tejano conjunto bailes (dances) they attended in the Rio Grande Valley in Texas.

Monica De La Torre is an assistant professor in the School of Transborder Studies at Arizona State University.