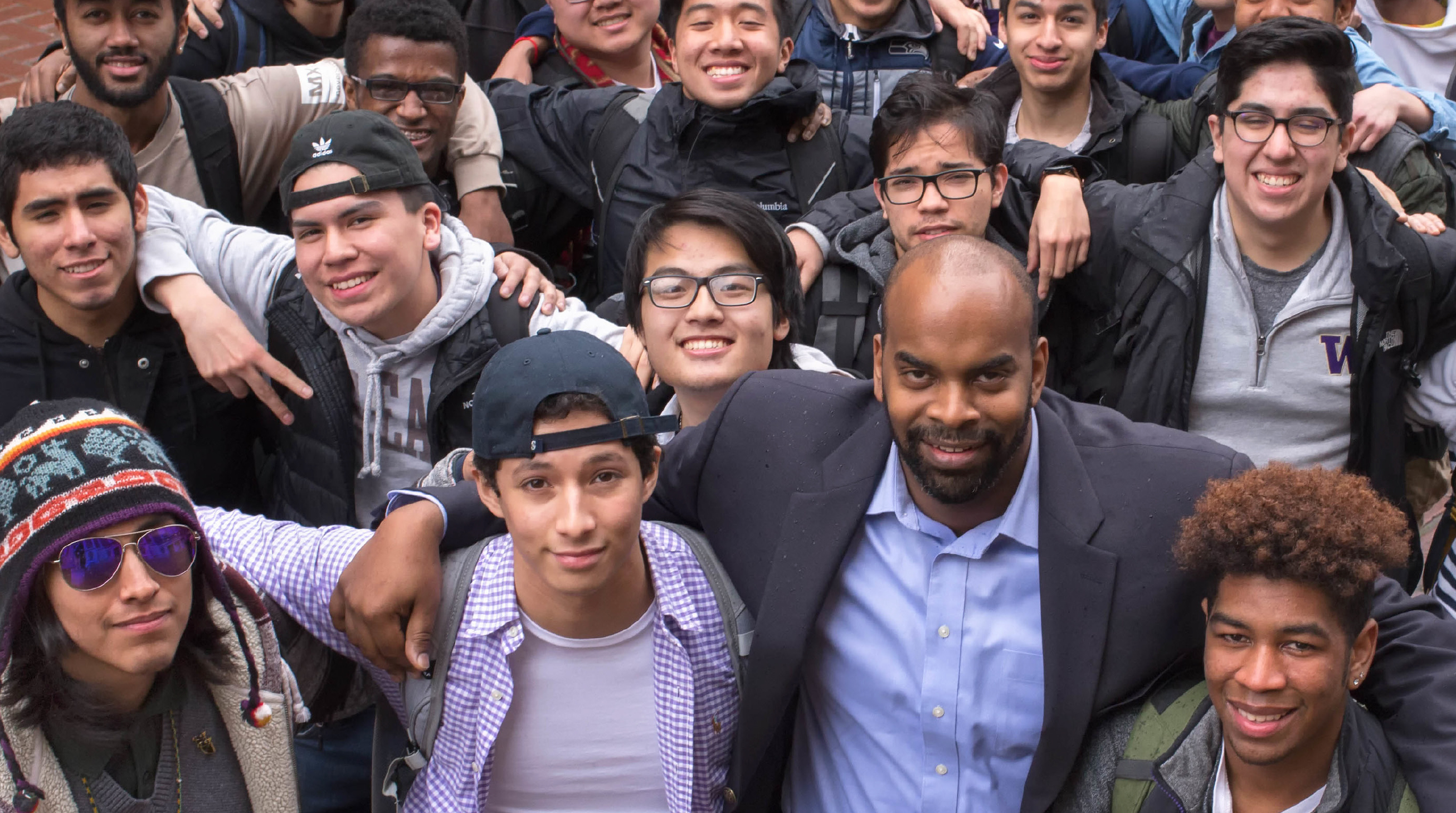 Young men of color thriving thanks to Brotherhood Initiative

Inside the new program advocating for black and brown students on campus.

Agustin Castro, a first-year UW student who was born in Mexico and grew up in Everett, says an African proverb explains why he likes the University’s Brotherhood Initiative: “If you want to go fast, go alone, but if you want to far, go together.” The new UW program aims to help underrepresented male students adjust to college life and help graduate more students of color.

Starting last fall, a group of about 30 first-year students began meeting regularly with Joe Lott, an associate professor of education who leads the initiative. The group meets on Wednesdays for a two-hour lecture on different topics, from how to get involved in research and choose a major to managing stress and transitioning to life at a large university in a big city. They also socialize over pizza and bowling.

The graduation rate for black men who enrolled at the UW between 2006 and 2007 was 67 percent, compared with 77 percent for black women. American Indian and Hawaiian and Pacific Islander male students in the same time period lagged behind their female counterparts by seven percentage points. Latinos had a graduation rate of 76 percent, slightly lower than Latinas’ 78 percent.

The Initiative, designed by Lott and a team of doctoral and postdoctoral students, addresses the sense of isolation many college students from underrepresented communities experience. It seeks to improve the students’ social and academic success while yielding information about the factors that seem to promote the success of young men of color in college.

Lott’s expertise includes equity studies and education and policy reform. He and his team first interviewed faculty and students of color at the UW about their experiences, researched practices at other schools, and reviewed studies before launching the Brotherhood Initiative.

“Because of the group, there is a sense of community. We are all in the same book, if not on the same page,” says D’andre Garcia Stubbs, a freshman from Yakima. “Without the Brotherhood, I might have stayed in my shell. I’m kind of an introvert. I will never be the first person to go out and make the first friendship, but once I know the person, I’m open.”

Stubbs says the group gives him a sense of community that makes the UW smaller, which is important to him. Castro and Stubbs both live in McMahon Hall, but being in the Brotherhood has turned an acquaintanceship into a friendship.

“I feel I know D’andre in a different sense, and the Brotherhood is what has created that atmosphere,” says Castro. “At the UW you have to have your game face on; you’re always competing. But the Brotherhood makes it feel like a shared race.” The Initiative is a partnership among the College of Education, Undergraduate Academic Affairs, Office of Minority Affairs & Diversity, the Graduate School and the Division of Student Life. A committee of academic advisers, student affairs workers and faculty will examine the research findings of this first year and make suggestions as to how to adapt the program.

Lott, who grew up in Louisiana and Virginia, attended Talladega College in Alabama—a historically black college—and Louisiana State University, where he focused his doctoral studies on black students and civic participation.

When he started at the UW in 2007, Lott was struck by how few black people he saw on campus and in the community. As a black man, a teacher and a father of two young boys, he started thinking about how he could help young men of color be more successful in school and in life. The Brotherhood Initiative is one effort, and will soon be followed with a program to support students through the ensuing years of completing their degrees and finding jobs.

“The idea is not for them to endure the UW but to see the UW as a place for them, and to strengthen their Husky identity,” he says. Not only does he want them to succeed academically, but also serve as ambassadors and mentors to others from their home communities.

Castro wants to be a civil engineer. Stubbs hasn’t decided on a major yet, but sees himself in some kind of teaching role. He is grateful that the Brotherhood will also provide him with mentoring as he makes his academic decisions.

“The Brotherhood has opened my eyes. I am not alone in the struggle. If you get to the UW that’s an achievement, but there’s always an option to be more at the UW,” says Stubbs. “The UW always gives you the option to struggle for something better for yourself.”