‘Down the Ave,’ a card game developed by business students, is full of tidbits and jokes about the UW and Seattle. 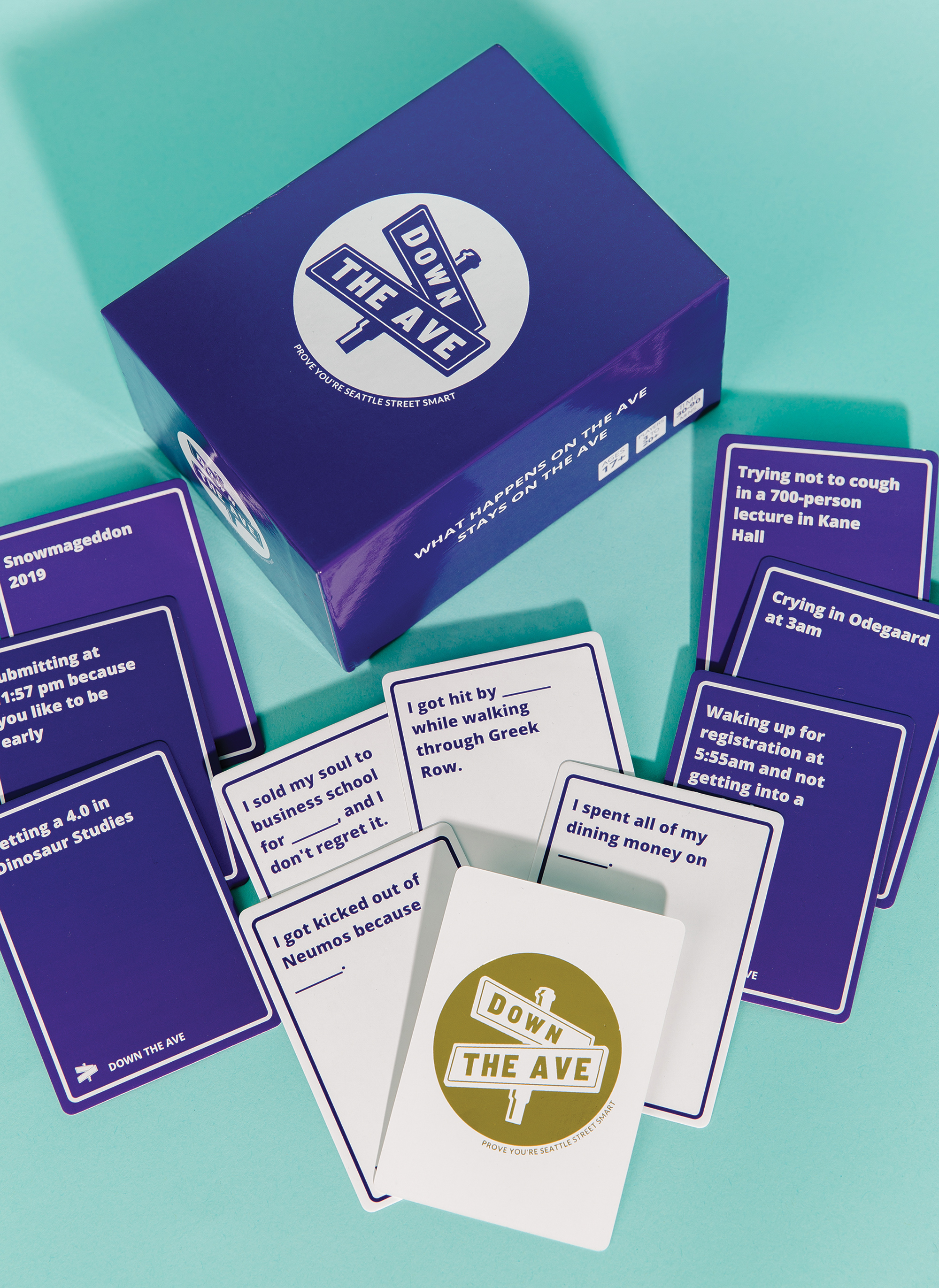 When the world seemed to shut down during the pandemic, people created pods of family and friends with whom they felt safe spending time in person. Since everything was closed, game nights saw a boost in popularity. With that in mind, a team of Foster School of Business students in the Creating a Company course developed “Down the Ave,” a card game packed with UW and Seattle culture.

Last year, this group of entrepreneurial business students brainstormed what kind of business they wanted to build. In the first quarter of the class, they wrote a business plan for a card game. In the second quarter, they pitched their business to a panel of investors and obtained seed funding to start the business. “We started in January, and we spent a few months trying to think of what kinds of things will be popular right now,” says Sarah Cabarteja, ’21, CEO of Down the Ave. “During that time, everything was still virtual in the middle of the pandemic and people were looking for more things to do but feeling virtual burnout. Game nights, we knew, were more popular during the pandemic, so we thought about doing a card game.”

One thing Cabarteja and the four other members on her team shared was their UW experiences, so they used that commonality to come up with the cards for the game. “All of us had different backgrounds,” Cabarteja says. “Some of us were international students, transfer students, commuters, some lived in dorms on campus. We put our experiences together to write our cards.” There are about 300 question-and-response cards in the deck with nearly half referencing the overall Seattle experience. The other cards are specific to UW and the University District. This balance ensures community members outside of students and alumni can participate.

If you’ve ever played Cards Against Humanity, you will recognize that this game is similar, but with a UW Seattle twist. They’ve included response cards like, “Honking back at the Drumheller geese to assert your dominance” or “Submitting at 11:57 p.m. because you like to be early” that are both relatable and funny—especially if you’ve ever been attacked by the angry avians near the fountain. Playing the game is sure to bring back some great memories.

Down the Ave is available at University Book Store and on its website, but Cabarteja has bigger plans for the game. “We would love to see it in stores,” she says. “We would love to see consistent wholesale orders.” She also hopes to have it at local game shops and cafes that hold game nights. “It’s a great icebreaker for people who are finally meeting new people for the first time and, of course, family nights as well,” Cabarteja says.