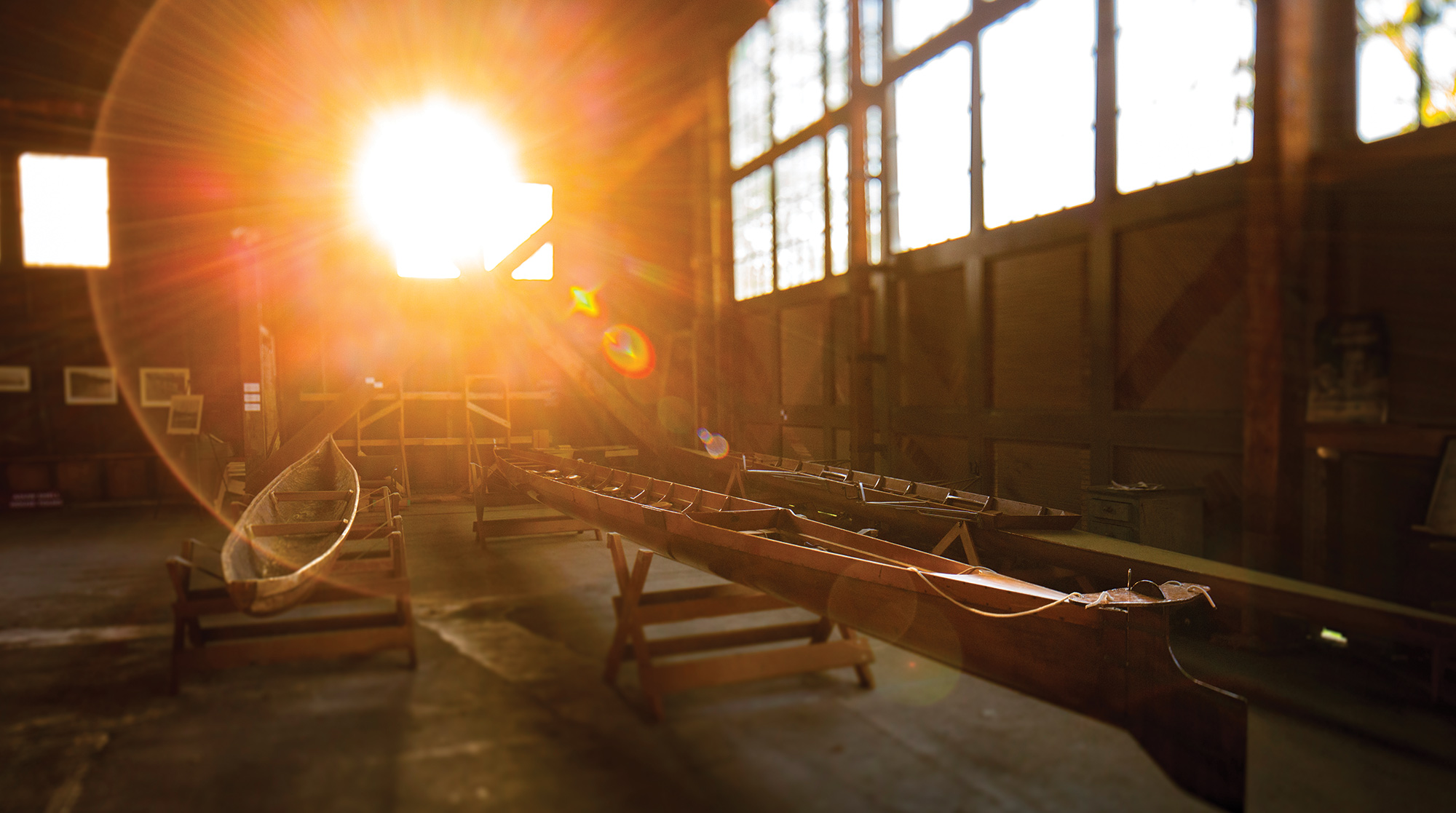 Nearly torn down in 1975, the ASUW Shell House is still a beloved building on the UW campus.

While the 70-year-old Conibear Shellhouse is the home of UW men’s and women’s crew—and such memorabilia as the 1936 Olympic gold medal-winning shell—there is another, even older boat house on campus that deserves your attention. Perhaps even more attention.

That would be the 101-year-old ASUW Shell House, which is located on the southeast side of Husky Stadium, along the shore of the Montlake Cut. “It’s like our cathedral,” says Eric Cohen, ’83, a former UW coxswain and rowing historian. “It’s historical, but it’s also spiritual to us. It’s a large part of what makes Washington rowing special. Not just the athletes who get to participate in it but the University of Washington and more of the entire Seattle community that has stood side by side with the UW since the very, very beginning. I just see it as a blessing.”

Interestingly, the ASUW Shell House didn’t start out as a home for one of the most storied university crew programs in the nation. It was actually built during World War I as a naval aviation hangar, where it was intended to house seaplanes to train naval aviators. Nearby was a training camp for servicemen and volunteers. (At the time, all things sports on campus were run by the UW student government, the ASUW, thus the name of the facility.)

The War to End All Wars ended soon after the shell house was completed, so the hangar was turned over to the UW and promptly became the crew’s shell house. And what great teams trained there.

The men’s rowing team won eight national championships over the next three decades and also sent a team to the 1936 Olympics in Berlin. Now referred to as the “Boys in the Boat,” thanks to Daniel James Brown’s best-selling book of the same title, that crew won the gold medal at those Olympics by six-tenths of a second—with Hitler watching from the stands. The UW crew would go on to win a gold medal in the four-man rowing competition at the 1948 Olympics in London shortly before the team moved to the Conibear Shellhouse. 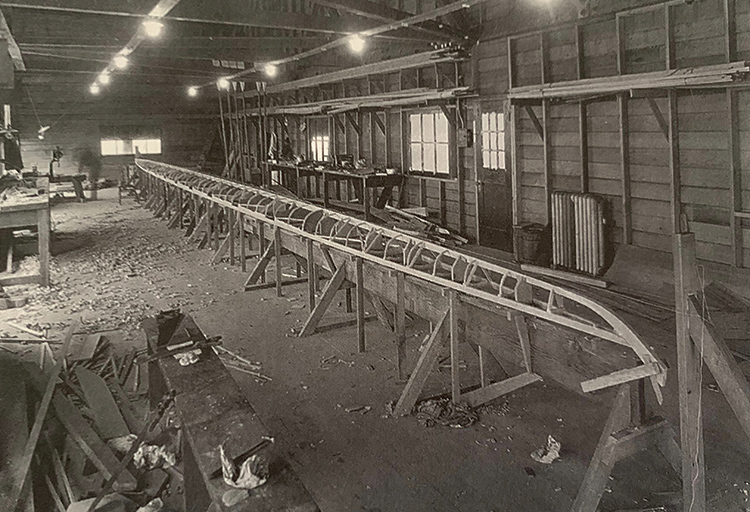 Following the rowing team’s relocation to Conibear—which was built in 1949—the ASUW Shell House was converted into a site where people could rent canoes; for many years, it was known as the Canoe House. More important, in a shed located on the west side of the building called the “Lean-To” was where UW women’s rowing restarted in 1969 after having been dropped as a program in 1917. Thanks to Title IX, women’s rowing became a varsity sport in 1975, and that team also moved to Conibear.

Nearly torn down in 1975, the ASUW Shell House was saved by being named to the National Register of Historic Places—the first building on the UW campus to receive that acclaim. It also was listed as a Seattle historic site in 2018. The aging facility is still beloved; it hosted a reunion of family and friends from the 1936 Olympic team last fall as well as a gathering for the 100th anniversary of the end of World War I in November.

“You feel like you’re touching history when you’re in that building because so little of it has changed.”

Does it look like other UW buildings or athletic facilities? No. It has a barn-like style and is made of wood, with cedar shingles covering the exterior walls that slope slightly up toward the high roof. The daughter of 1936 gold medal rower Joe Rantz, ’36, Judy Rantz Willman, recalls being in the shell house with Dan Brown while doing research for his “Boys in the Boat” book.

“We were looking around at mostly canoes but feeling the thickness of (the shell house),” she recalls. “Just being able to look around, it was kind of enough to make the hair on the back of your neck go up. ‘Gee whiz, this is where it all happened!’”

While the shell house is often locked, you can sign up for a weekend tour offered by former UW rower Melanie Barstow, ’16. You will get the opportunity to see the 10,000-square-foot interior that looks so much like it originally was. “We’re here in 2019, and it’s the same,” Cohen says. “It hasn’t changed. You feel like you’re touching history when you’re in that building because so little of it has changed.”

“You walk in and all your senses trigger,” adds Nicole Klein, who is spearheading an effort to explore renovating the facility into a mixed-use space that could host students, and special events while being surrounded by interactive exhibits and timelines that share its rich history. “Some people would say this is a sacred space. To others, it’s a place they adore and reflect fondly on. And others had never been allowed in, so when they walk inside, it feels like you let them into the Secret Garden.” 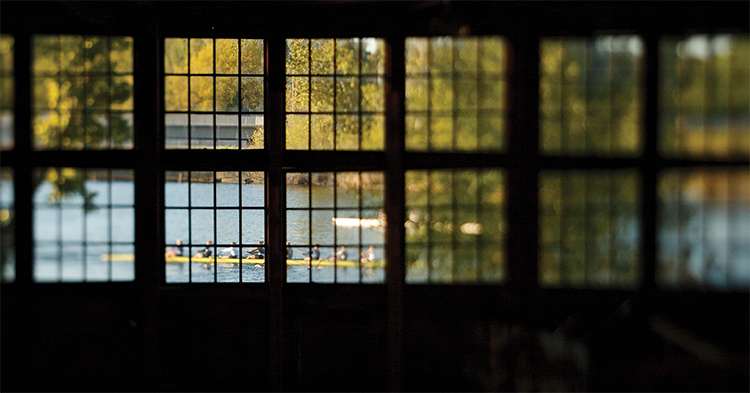 Inside the ASUW Shell House, you will see the historic wood rafters near the ceiling that will leave you awestruck. You can walk up the stairs to the mezzanine level, where the legendary George Pocock constructed and worked on rowing shells for decades, including making the “Husky Clipper,” which the UW team used to win the 1936 gold medal. “You can feel George Pocock’s presence in there,” Cohen says.

David Strauss, assistant professor of architecture, says that what is exciting about the building is its lightweight wood structure. “It’s like a temple to Northwest building materials,” he explains. Strauss is helping with UW Recreation’s plans to assess renovating the ASUW Shell House, which the organization says could “bring campus back to water.”

In addition to the famed Husky rowers, Sally Jewell, who served as the U.S. Secretary of the Interior for President Obama, worked in the Canoe House when she was a mechanical engineering student at the UW. She said it was one of her fondest experiences at the UW.

“Our campus is unique in the world for many reasons, but one important aspect often overlooked is our expansive waterfront,’’ Jewell, ’78, wrote in an email. “Restoring this historic landmark, could enable us to celebrate our relationship to the waters that surround us, and the history that has shaped our region from indigenous communities to the present. A national and local treasure, the ASUW Shell House is an artifact layered with our collective histories which celebrate our deep and lasting ties to the natural world.”

Judy Willman said that she would like the renovation to retain the look and history of the shell house. She isn’t alone. “Everyone that we brought through, no one wants to get rid of the exposed beams,” Klein says. “Everyone wants to see it look like as much right now as it did in the heyday in its 1930s as possible.”

“The ASUW Shell House is a University of Washington rowing icon,” UW men’s rowing coach Michael Callahan, ’96, adds. “It is a symbolic treasure representing the history and success of our student-athletes and alumni far and wide.”

To learn more about the future of the ASUW Shell House, please visit www.asuwshellhouse.uw.edu or call (206) 221-8517.

The century-old ASUW Shell House is where the ‘Boys in the Boat’ became a team.