In a lofty upstairs studio at Meany Hall, a stager and an assistant are strapping a dancer into her costume: Two 7-foot poles attach to her forearms, then insert into the diameter of a 60-yard circular gown of glowing Chinese silk. It’s day one of Chamber Dance Company rehearsals for Loïe Fuller’s 1896 movement and light spectacle Lily of the Nile. The dance will transform that puddle of silk into a spellbinding miasma of blossoming clouds and rivulets that appears to flow as effortlessly as a river. For the dancer, however, the solo is a relentless four-minute burn of her biceps, triceps and rotator cuff muscles. She has just been okayed to get back into costume because, as the stager put it, “Her arms have turned pink again.”

Dance is a body-taxing profession; the shelf life of dancers, like star athletes, is notoriously brief and unpredictable. A sudden injury can take out a performer by age 30 or even earlier. Rare is the dancer who still can earn a living on stage past 40. But then what?

When professor Hannah Wiley initiated the University of Washington Dance Program’s master of fine arts degree in 1990, she saw it as a lifeline for artists: a place where professional dancers could continue to perform while gaining skills and credentials for the next phase of their careers. Thus was born Chamber Dance Company, a performance arm of the M.F.A. program, where the experienced dancers perform from a vast catalog of modern choreography.

Twenty-five years later, the UW’s unique training program influences dance education across the country. Alumni serve on the faculty at such prestigious institutions as Bard College, Bryn Mawr, Vassar, McGill, Reed, the University of Utah and Cornish College of the Arts. Betsy Cooper, a performer who came to UW for her M.F.A. in 1997, served as director of the UW dance program for 12 years and then became a divisional dean in the College of Arts & Sciences. She recently moved to Manhattan to chair the dance department at Hunter College.

The UW has not always stood out as a model of dance education. In fact, through the 1960s, modern dance was housed in physical education while ballet classes were offered through the School of Drama. There was no dance major. Classes were held in a makeshift studio in the old campus armory building, upstairs from the rifle range. But the University got a jolt in 1965, when a compact firebrand of a dancer named Ruthanna Boris came to town. A native New Yorker, she had been one of choreographer George Balanchine’s first American students. She performed in the 1935 debut season of his American Ballet and danced under his direction until 1942, when she joined the touring Ballet Russe de Monte Carlo. Hip surgeries ended her stage career in the 1950s and left her walking stiffly, with canes. She carried on for a while as a choreographer before moving to Seattle to accept a teaching position at UW.

Miss Boris (as she was known to her students) oversaw the advent of a dance division in the drama school, serving as its first official head. She pushed hard for the creation of spacious new dance studios at Meany Hall, with high ceilings, natural light and much-needed showers and locker rooms. Miss Boris demanded that dance be treated as equal (or, preferably, above!) other studies.

Dance history is a long chain of kinetic tradition, with movements and knowledge passed from one dancer to the next.

Two other influential teachers joined the faculty in 1967. Eve Green, a beloved ballet teacher, known as an advocate for dance and the arts, served as head of the dance division from 1975-85. Green activated a force of letter writers to help save the dance program when UW budget cuts threatened to take it out. And Joan Skinner, a former dancer with the Martha Graham and Merce Cunningham companies, led modern dance training as it joined ballet in the drama school’s dance division, which she directed from 1985-87. She is known for developing the Skinner Releasing Technique, an approach to movement training guided by principles she had learned after a serious back injury during her performance career.

Dance history is a long chain of kinetic tradition, with movements and knowledge passed from one dancer to the next. There is a pleasing circularity, a linking of generations, that is part of this story as well. Hannah Wiley, ’73, studied with Boris and Green at the UW in those early years of the program. So did I. Eventually, I followed my introverted ways to become a writer about the arts, while Wiley moved through her early career as a professional dancer, teacher and administrator before returning to UW to design the M.F.A. program and found Chamber Dance Company.

The disappointments Wiley encountered in her own graduate school experience in New York motivated her to create a more practical and encompassing course of study, she recalled: “I started picturing a degree program that would have been perfect for me at age 32.”

Wiley was chair of the dance department for a coalition of schools including Mount Holyoke, Amherst, Hampshire, Smith and the University of Massachusetts, but couldn’t be considered for tenure without a master’s degree. In graduate school, Wiley was one of the oldest and most experienced students; nonetheless she was performing student choreography and enrolled in technique and academic classes she could easily have been teaching. She imagined instead “a program where I could have this intellectual festival, with my peers as classmates, no class I didn’t like, and to teach material that would make it so people could succeed: teach them dance administration, dance education. So they could hit the ground running. A degree that took practitioners, the real artists, and trained them to be educators.”

That notion started with what Wiley wanted for herself, but shifted midway into what she would like to offer others. That’s how she thinks, and that’s exactly what she set out to create at UW when she returned in 1987. Most dance M.F.A. programs focus on choreography. The program Wiley devised is extraordinary because it is interdisciplinary, and it focuses on dancers who perform as well as contribute to the field of dance studies. At the heart of the program is Chamber Dance Company. The two-year degree accepts three new dancers a year as teaching assistants with full tuition waivers. So the company maintains a shifting cast of six, occasionally supplemented by local professionals or outstanding undergraduates. 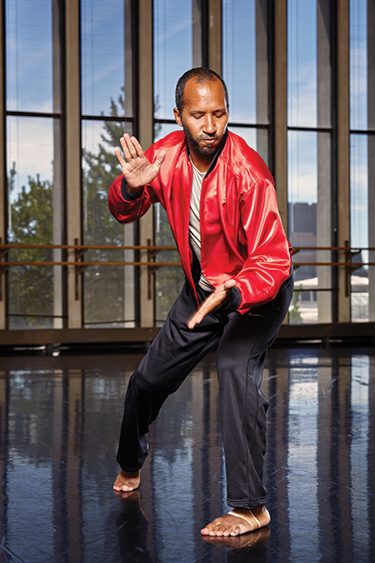 Wiley figured the performance aspect would be essential to lure high-caliber candidates. But she quickly realized it wasn’t just performing that drew them: It was the pieces they perform. Chamber Dance Company revives historically significant modern choreography that is rarely danced and in some cases in danger of being lost to time. “They were grateful to have been able to embody the work rather than reading about it,” says Wiley.

For dance undergraduates and Seattle audiences, the annual Chamber Dance Company concerts are a treasure. Where else can we see live performances of renowned classics by Vaslav Nijinsky or Ruth St. Denis? Where else can we discover groundbreaking 20th century dances by Michio Ito, Jane Dudley, Oskar Schlemmer, Zvi Gotheiner? For the dancers, however, the performances are the stuff of dreams. “If I never dance on stage again,” Jason Ohlberg wrote to Wiley after a performance last year, “I will feel satisfied that I was able to fulfill my goals in this career; that’s not something I could have said before this concert.”

Dale Merrill was artistic director at Seattle’s Spectrum Dance Theater in 1990 when Eve Green suggested he join the first class of the UW’s new M.F.A. program. Graduate school had never been on his agenda, but he agreed to have lunch with Wiley and discuss the possibility. Enticed by a role in a Paul Taylor dance, he decided to give it a go. After the first quarter—working full-time at Spectrum, attending graduate school and trying to keep a relationship going—Merrill found himself at Wiley’s office door in tears. “I’m not sure I can do this,” he told her. If he could make it through the two-year program, Wiley promised, a multitude of doors would open for him. “She was absolutely right,” says Merrill, now dean of the arts at California State University, Fullerton. “It was probably the hardest two years and the best two years of my life.”

During his time at UW, in addition to teaching ballet and performing with Chamber Dance, Merrill took courses in philosophy, education, business and sports science. What makes the UW program stand out, he says, is that it acknowledges the high professional skills the dancers bring with them. They then learn how to impart those skills to others and utilize their strengths in an academic setting. “It was amazing the way the program is set up. It really teaches you how to be a university professor, how universities work,” he says, “I call it University 101.” As a dean, Merrill is sometimes dismayed to see new faculty members flounder, thinking they could come to the university and just continue to be artists, dancers, painters, actors, whatever. “Sometimes I just think: You need to go see Hannah Wiley. You need to take this class.”

With more than 100 works in its repertory, the company has become a living museum of modern dance.

When the National Association of Schools of Dance holds its annual meetings, Merrill encounters many UW M.F.A. grads. Twenty-five years is relatively brief, but in a few more years, the program’s impact on the dance field will be huge, he says. “It’s because we have a unique perspective and understand what is the role of a professor in a dance program. So many people think it is about teaching technique classes and that is a small, small part of being a university professor.”

The UW’s program serves another important function. Wiley extended Chamber Dance Company’s mission to include preservation. Unlike music or plays, choreography is not generated in a written form. During much of the early 20th century it was rarely recorded on film. Few realize how much important modern choreography has already disappeared. Chamber Dance now maintains a video archive that includes each dance performed, along with documentaries that probe the memories of the choreographers and stagers who revive the works. Their recollections of each dance, its mood and movements, its imagery and intentions, are captured—and in some cases, provide the only tangible record of the dance itself.

With more than 100 works in its repertory, the company has become a living museum of modern dance.

This year’s program time-travels along the arc of modernist dance history, touching down at key moments: the 1896 light-show spectacle of Loïe Fuller; a heart-gripping scene from the 1911 ballet Petrouchka, originally danced by Vaslav Nijinsky; and more contemporary works by Shapiro and Smith, and Doug Elkins.

Each work expresses something of the era in which it was made: Loïe Fuller, for example, was a close friend of Marie Curie and an innovator in the use of chemical gels and luminescent salts to create stage lighting effects. Martha Graham created Lamentation at the start of the Great Depression. Anna Sokolow’s 1955 Going, choreographed to the jazz music of Kenyon Hopkins, peeks into the window of a mid-century New York tenement at a guy who just knows he is cool.

Wiley makes sure the historical dances don’t take on the dusty patina of bygone times, like grainy old movies with scratchy soundtracks. This is choreography that speaks in the present tense, she says. “I’ve given myself the responsibility of making these dances be alive.”

Sheila Farr is a Seattle-based author and arts writer, and former art critic for The Seattle Times.