“A lot of immigrants are nervous about writing in English,” says Assunta Ng, ’74, ’76, ’79. “They shouldn’t worry about whether it’s good enough. You have things to say, feelings to express. And memories to share.” 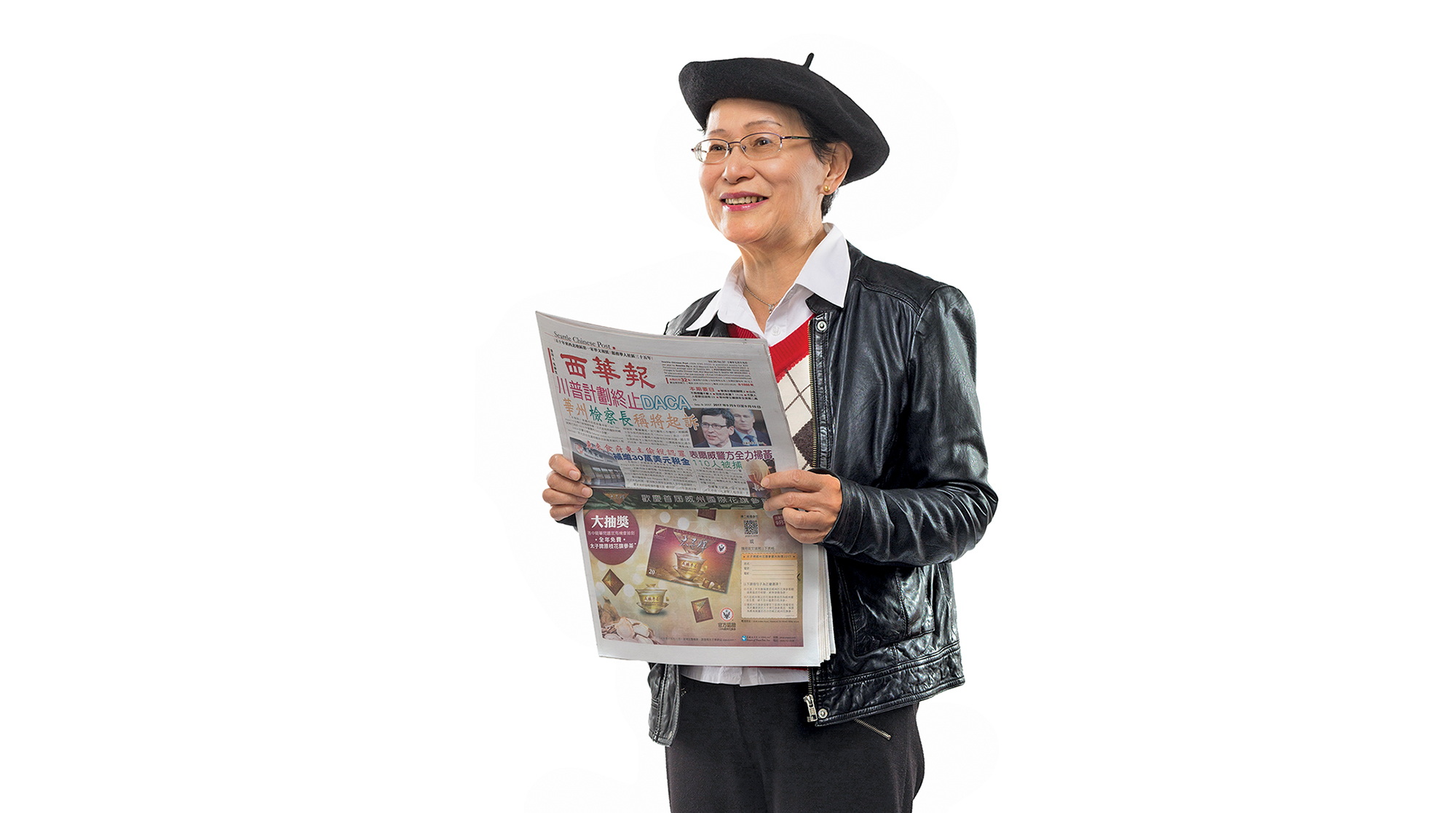 The first time I had my own room was living in a UW dorm.

Growing up in Hong Kong, we were poor and I shared a bunk bed with my grandmother. Americans aren’t aware how privileged they are to have their own room, bed and closet. My room in UW’s Hansee Hall was small, but it was my own.

In fourth grade, our teacher asked…

…us to write about what we wanted to be when we grew up. I knew I’d get a higher grade if I chose an unconventional career. I wrote about becoming a writer or reporter. I don’t know how I even got that idea.

…and Northwest Asian Weekly a year later. When the Watergate story broke, I remember people in Seattle’s Chinatown lining up to buy copies of San Francisco’s Chinese newspaper. They were trying to understand what was happening. At that time, I was trying to figure out our community’s needs and how to help. I realized we needed our own local paper.

The newspaper’s current office is…

…across the street from the basement where we started. I can’t leave my community. Our online readership is growing with more than 200,000 readers monthly and the print edition has around 10,000. The Chinese Post has published more than 1,862 issues. That’s a lot of deadlines!

I was raised in a traditional Chinese family with low expectations toward women. The best thing to do was find a good husband. I was shy at home, very obedient and submissive. It was shocking when I told my parents I wanted to study in America, but I had realized I wanted the freedom to grow.

I didn’t speak for six months.

At that time, it was unusual to study abroad and, of course, my parents said no. After that, I just didn’t talk. I didn’t have anything to say because I felt hopeless. They finally agreed and I came to the U.S. in 1971.

I first saw UW’s campus while driving on I-5.

Wow! It was so beautiful. I was attending college in Oregon, but decided right then that I wanted to attend UW. I didn’t know anybody there or where I was going to stay, but I knew that’s where I wanted to be. I applied for a transfer and started at UW my sophomore year.

My best friend was the library.

Rain or shine, I walked to Suzzallo Library after dinner. It was a great place for me to grow up. In Hong Kong, the library was small and students were only allowed to visit one hour per week. Here, the school and public libraries are so good. We should appreciate them more.

…at Beacon Hill’s Mercer Junior High for four years after college. Language barriers made it difficult for immigrant parents and they were often struggling to make a living and survive. Asian parents didn’t step foot in the school, but I reached out. I translated forms and visited their homes. I hosted a potluck and 50 to 60 immigrant parents came.

It was a crazy night.

We didn’t sleep until 3 a.m. finishing the first issue of the Chinese Post. We had to buy equipment from Taiwan—a Chinese manual typesetting machine, which got lost in transit and arrived late. Then we had to learn how to use it. We managed to print 5,000 copies on time, though! It was me and about seven friends, mostly from the UW.

Starting a newspaper is simple.

You hire people and find an office. It’s the why that matters. For anything in life, it’s the motivation to fulfill your dreams that keeps you going week after week.

I still write because I’m a role model for immigrants.

A lot of immigrants are nervous about writing in English. They shouldn’t worry about whether it’s good enough. You have things to say, feelings to express. And memories to share.

Deanna Duff and Ron Wurzer are freelancers for Columns Magazine.