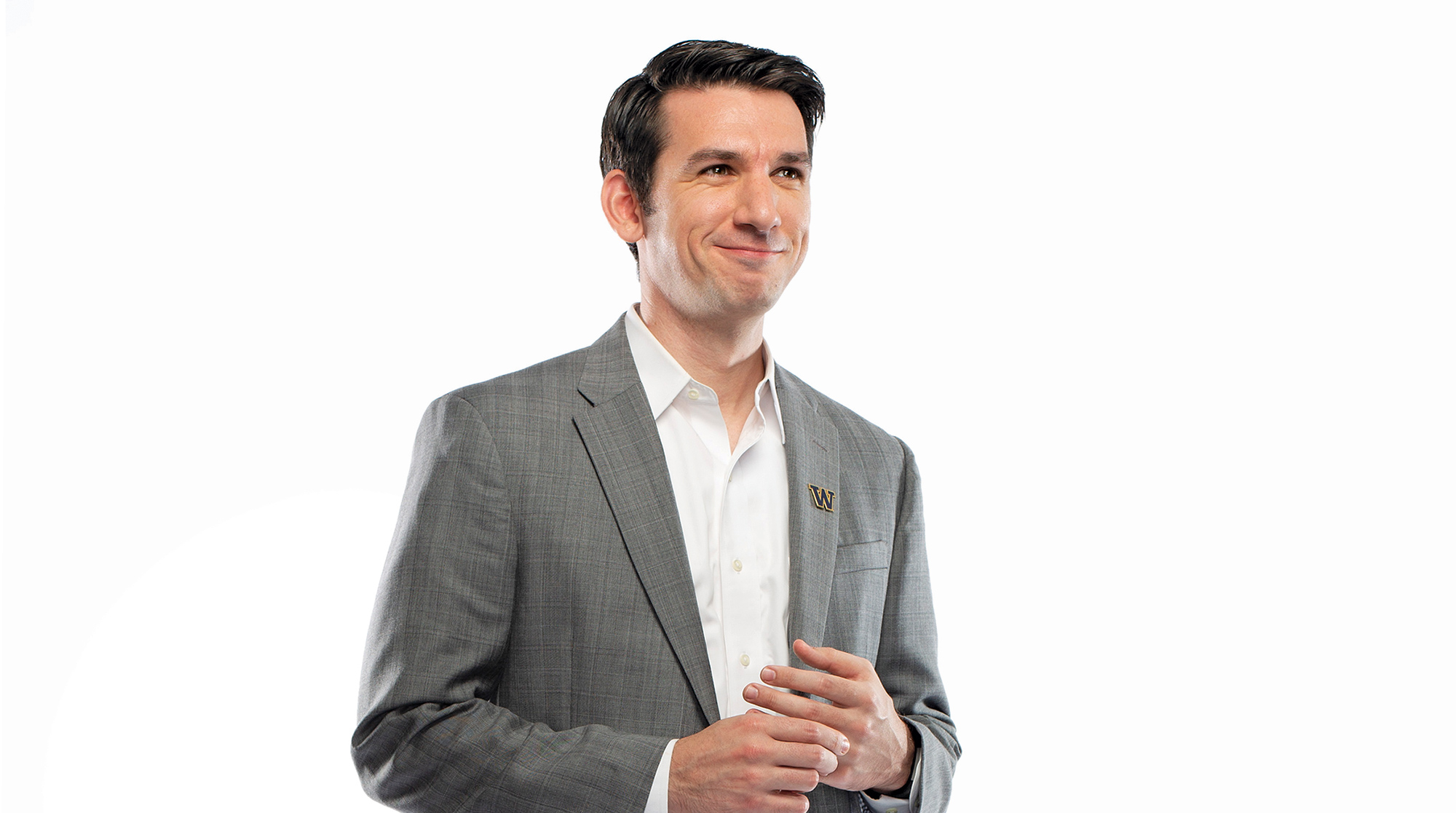 As told to Deanna Duff | Photo by Ron Wurzer | September 2018

This is my dream job.

I’ll call about 50 Husky games a year for football and basketball, plus around 30 coaches shows. I get to be the voice of this major athletics program and I want my passion to bleed through on-air. I want listeners to know we’re in this together.

I have always been fascinated …

by broadcasting. My mom has old VHS tapes of me at 7 years old doing mock broadcasts in my bedroom with teddy bears in the background. I just made up college football scores using random teams—Washington defeats Alabama!

As a student at Ohio University,

I wanted every bit of experience possible. I was up at 5 a.m. doing sports updates. I rode 12 hours by bus to call college baseball games. I called play-by-play for local high schools at $7 an hour. I deejayed Top 40 music. You can’t get good at something without practicing.

if you can tell listeners the basics and not leave them wondering anything—down and distance, score, players. You’re doing a great job if you put them in the helmet of a player who just returned from an injury and 12 months of rehab, lugged the ball across the goal line and now erupts with emotion after scoring a touchdown.

We live in an age where it’s so easy to criticize. An athlete might be in the gym every morning at 6 a.m. practicing and then study until 2 a.m. They give it everything they have, they make a mistake, and then they have to hear about it from everyone on Twitter. It’s important to see the big picture of who they are and the effort they put in.

I grew up a big Mariners fan in Ohio.

Due to time zones, I followed them on 36-hour delay. I had to wait until Thursday morning to rip open the newspaper for Tuesday night’s scores. Funny, no one will ever experience that again because of the internet.

My other big passion is songwriting.

I got a guitar in high school and wrote awful songs for years. Then, I joined the Nashville Songwriters Association International, and I realized great songwriting is just a lot like radio play-by-play. You’re using nothing but words and sounds to tell a story and evoke images and emotions out of thin air.

driving my little Mazda. I was laid off from a broadcasting job in 2010 and hit the road playing open-mic nights across the country. It was kooky, weird, and some people thought I’d lost my mind, but I couldn’t have cared less, and it was an incredible experience. Sometimes you have to just go for it.

That was a night …

that happened in my life! I had a part-time job driving all over God’s green earth covering Virginia high school games. After a 3 1/2-hour drive, there was no room in the press box, so I stood on top. It was 33 degrees, raining, and the ink on my rosters was bleeding, I tried covering the radio equipment with my jacket. Then the scoreboard shorted out, and I attempted to remember everything by memory. On the way home, a deer T-boned my car. I couldn’t wait to tell people: this is broadcasting!

I’m often just talking to people I know. I don’t know everyone yet, but I feel like every listener is part of the same group along with my wife, parents and friends. We’re all kindred spirits who want to see things go well for the Huskies.