Across campus, and especially within the College of the Environment, researchers are using a new method for collecting old-fashioned data: They are employing real people—citizen scientists—to study changes in the environment.

While foraging Pacific Northwest forests and scouring Pacific Coast beaches collecting plant cuttings or water samples may sound like a fascinating hobby, it’s not all just a bunch of feel-good tasks. The projects are built on a solid framework of scientific inquiry, with genuine rewards for participants and the researchers overseeing them.

Take, for example, Professor of Chemical Oceanography Rick Keil’s use of citizen scientists to demonstrate how human-derived substances arrive in bodies of water. Volunteers in his SoundCitizen project collect water from Puget Sound or surrounding watersheds and help measure the amounts of spice “tracers”, such as cinnamon, vanilla or thyme.

Although the tracers are benign, they follow what Keil calls the “sink-to-Sound” path. That’s the same route taken by many harmful compounds in kitchen cleaners and household products. 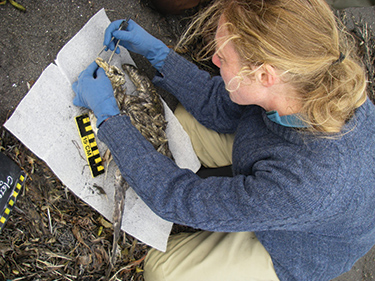 “If minute traces of spice can accumulate to measurable amounts in Puget Sound, it makes one wonder what else is being washed down the drain—and what the environmental consequences might be,” says Brittany Forrest, co-founder of SoundCitizen.

In 1997 Julia Parrish, director of College of the Environment’s Program on the Environment, was observing a colony of common murres, and yearning for a big picture of life on the Washington coastline. So, she established COASST, a multistate project that generates high-quality data all the way from the Bering Sea to Santa Cruz and, to date, has attracted more than 600 volunteers.

“I’m stunned at the number of people who are jazzed about going out to find dead birds,” says Parrish. Collectively, COASST workers survey about 300 Pacific Coast beaches, filling out data sheets and snapping photos of every bird carcass they find. Parrish pools the data and looks for patterns. An unexpectedly large number of seabird carcasses could signal a seasonal shortage of food fish, a toxic algae bloom, an oil spill at sea, or something entirely new. 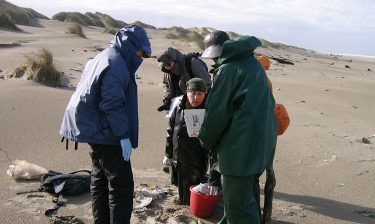 Further inland, citizen scientists with UW Botanic Gardens Rare Plant Care and Conservation program are turning their eyes to such places as the shrub steppe of Central Washington in search of plants listed as endangered, threatened or sensitive to decline.

While about one third of Rare Care’s volunteers are doctoral or master’s degree-holders, not all have impressive academic credentials: Some of the best volunteers are gardening hobbyists. And yet, their research matters. By employing citizen scientists and sharing its data, Rare Care has been instrumental to updating Washington Natural Heritage Program’s estimates of rare plant populations throughout the state.

“We’ve heard a number of times that our information has been used by people writing environmental impact statements and other important planning documents,” says Wendy Gibble, ’06, Rare Care’s program manager.

From Sound to mountains, these are just three examples of how citizen-powered research is becoming fundamental in forwarding science and serving the environment.