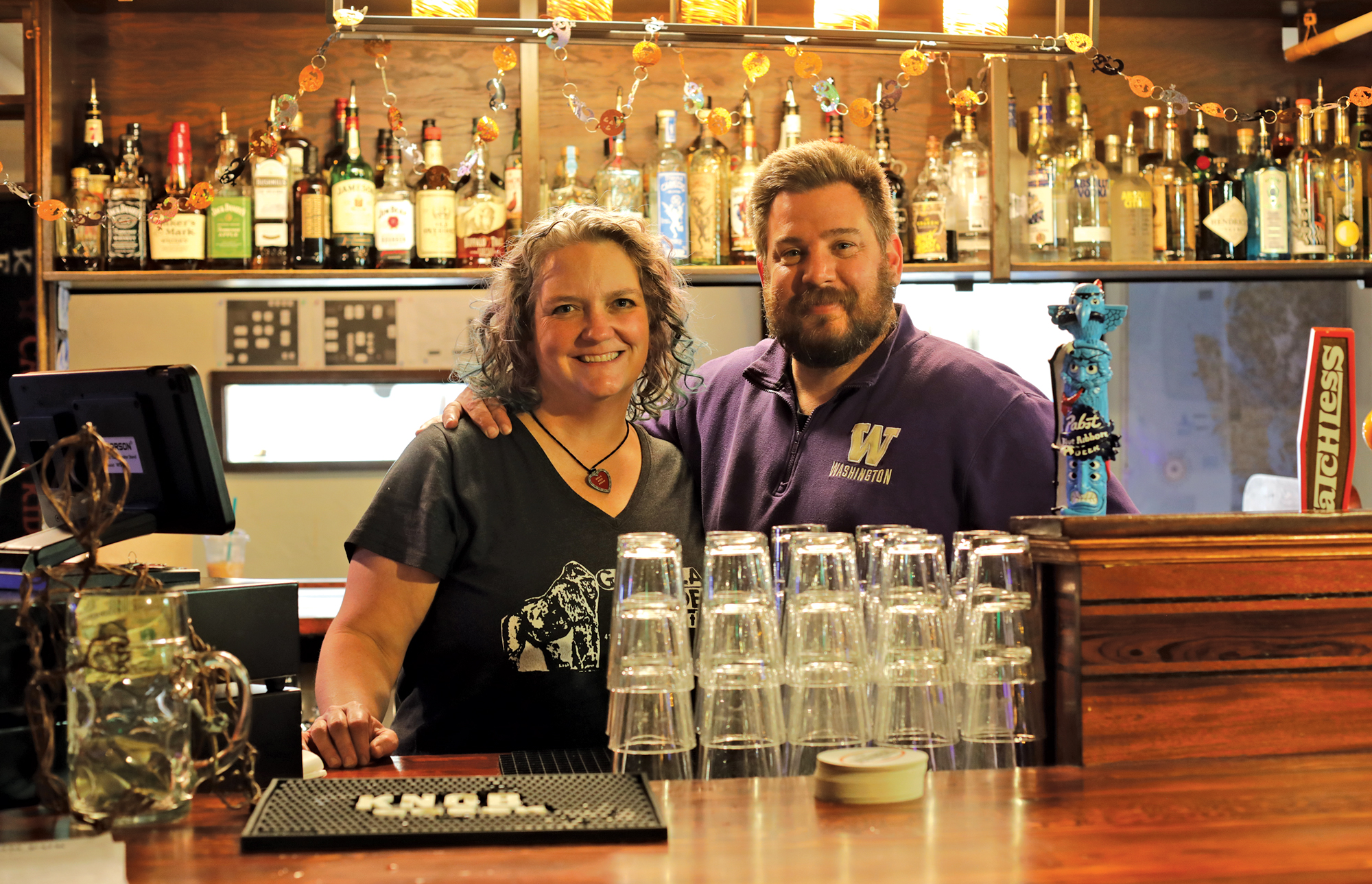 It might be an exaggeration to say the origins of the College Inn Pub are shrouded in mystery, but there is some disagreement over when it first opened. Some patrons say the subterranean watering hole at the foot of University Way N.E. set up shop in the 1960s. Others insist it was the early 1970s. One thing is certain, though. The UW professors, grad students and locals are once again able to gather there and debate the issue thanks to a rescue and remodel after its original owners were forced to close due to COVID-19.

“The memory is a bit fuzzy for everybody,” says Jen Gonyer, ’01, a UW medieval literature grad who was one of three regulars who rushed in to resurrect the pub. “I think it might have been a case where they were probably serving beer and making peanut butter-and-jelly sandwiches when they weren’t really officially a business.”

As she and the hundreds on Facebook who mourned the bar’s closure see it, the College Inn isn’t just any bar where college students go to do shots and get drunk.  Instead, it’s an off-campus institution styled after basement pubs at the University of Cambridge. A place where grad students hung out and worked on dissertations over beer, professors unwound and locals could experience an almost “Cheers”-like atmosphere where everyone knew their name.

It’s just as personal to Gonyer, who dated her husband (and ownership partner) Al Donohue, ’99, ’02, there. It’s where he met his law school buddies and it’s where she worked as a waitress. It’s also where they hung out with pub regular Seth Howard. “This isn’t just a college bar, it’s a community center with beer,” she says, paraphrasing the sentiments of a former bartender.

“It was never my desire to own a bar. We jumped on it because it’s been so hard to see all of the heritage places in Seattle close.”

There’s also a history that predates the bar. It’s in the last Tudor-style building off campus that was constructed for the 1909 Alaska-Yukon-Pacific Exposition and thus is a historic landmark.

All that came under threat in July 2020, when the pub closed. You could say that Gonyer, a medievalist, Donohue and Howard decided to pick up the gauntlet and run with it, even if somewhat reluctantly. “It was never my desire to own a bar. We jumped on it because it’s been so hard to see all of the heritage places in Seattle close” due to redevelopment and other factors beyond their control, she says. “This was more doable. It’s important enough [that] it was worth a shot.”

The trio quickly discovered that resuscitating history isn’t easy, even after a few months. The once memento-filled walls were bare and the place was in awful shape. The wall behind a dartboard had disintegrated, a three-compartment sink in the kitchen was hanging on by a few screws and “the tables that used to be here were so deeply engraved with graffiti that the Health Department was never going to let us open in an age of COVID-19. There was actually green mold growing on the table tops.” She had a photographer take pictures of each one and hung the photo next to the replacement tables.

They went one step further with a table that traditionally hosted Ph.D. students after they defended their theses. As legend has it, classmates would get their colleague drunk and have them carve their name into the table. The table top now sits on the wall near its old location.

Grateful returning regulars have noticed that the once-darkened pub seems brighter than before. As Gonyer puts it, “It’s not that it’s so much brighter, it’s that everything is painted and clean.” Ever the historian, Gonyer is working hard to restore a sense of the bar’s past. She has created a wall of memorial plaques next to the fireplace and is collecting photos for a wall of notable alumni. So far, only former Seattle Sonic Detlef Schrempf’s picture graces the wall, but she expects that to change soon. “The walls are blank,” she says. “I’m going to try to put up as much history as I can.”

Gonyer’s goal isn’t to preserve a classic Seattle place in amber so people can see the city’s past. She hopes newcomers will become part of it. “I want people that are coming down the stairs, especially people that are new to the UW, new to the area, to come down and get a sense of how long this place has been here and how many generations of alumni have come through here, but also [to] see themselves in the history as well. Them coming here, becoming regulars, they too are writing that history for the future.”

Pictured at top: The husband-and-wife team of Jen Gonyer and Al Donohue, who  joined pub regular Seth Howard in bringing a beloved UW hangout on the Ave back to life.