As a sportswriter for three decades, I’ve had the pleasure of covering events on six continents (unfortunately, no spring training in Antarctica­—yet). That includes 20 World Series, 12 Olympics, Final Fours, Super Bowls and even the World Wife Carrying contest in Sonkajärvi, Finland, where my wife and I finished in the top 10 of contestants who were actually married.

Among other highlights, I was there when my favorite boyhood teams, the San Francisco Giants and Boston Red Sox, each won their first World Series in more than 50 years. I caught Cy Young Award winner R.A. Dickey throwing his famous knuckleballs. I cycled with Tour de France winner Floyd Landis (after the title had been taken from him when he tested positive for performance-enhancing drugs).

But my happiest sports memory was playing for the Widowmakers softball team, which won the 1989 IMA championship with some of my closest friends. It wasn’t the equivalent of the Mariners winning the World Series but at least we actually reached the championship—and won it.

I was the left fielder who played shallow enough that fly balls regularly sailed over my head but I wrote about our title run later in a four-page “Widowmaker Illustrated” that I printed for my teammates. My lead graph: “And then the Widowmakers swarmed the infield, leaping and dancing and shouting, suddenly as light as the ether now the weight of a decade of monkeys had been lifted from their backs.”

Not that there was a photo of us leaping and dancing. Instead, I went with a photo from the New York Giants’ historic 1951 playoff win over the Brooklyn Dodgers.

Why didn’t I use a photo of us? Because second baseman “Hot” Rod Mar accidentally double-exposed the negatives while photographing us. This was back when cameras still used film.

One of our pitchers, Steve Strom, even threw a no-hitter, though he was not experienced enough to know it.

Fortunately, Rod did not repeat this problem during the rest of his career. You see, he went on to become one of the best sports photographers in the world. He has won the international Pictures of the Year competition and the best feature photo at the 2008 Beijing Olympics, photographed three covers for Sports Illustrated, shot pictures for ESPN (including one of me posed naked on a bicycle) and is currently the team photographer for the Seattle Seahawks.

This is just one of the fine and sometimes unexpected careers from that softball team. In addition to Rod, two players on our championship team went on to work full time for ESPN: myself and third baseman James “The Meal Ticket’’ Levison. That is by no means all of the notable accomplishments, though. 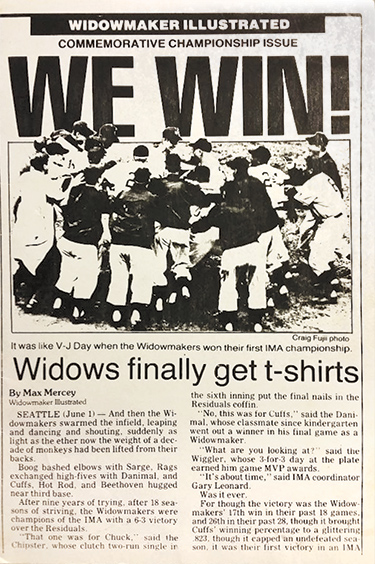 “There was no tryout process for new players,” Sarge recalls. “Somebody just showed up on game day to play the open position and they were embraced by the veterans. The rookies instantly became Widowmakers. This colorful collection of misfits shared only two bonds—a desire to hang out once a week with a really good group of guys, and most of us were huge Husky fans.” 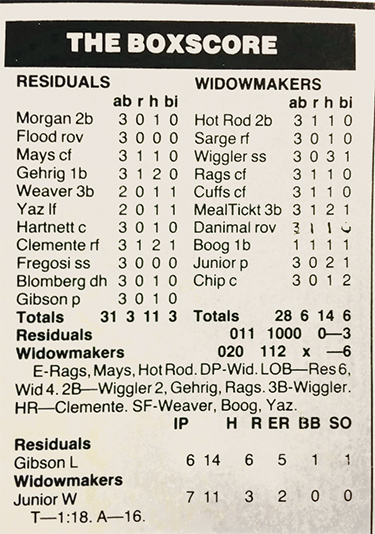 Yes, we were a colorful lot. Almost all of us had nicknames that several of us still go by all these years later. Three teammates wore Mets caps, Sarge wore a Cubs cap, I wore a Red Sox cap and Luke would always wear a striped Chevron shirt in each game. We would all go to Roundtable Pizza after each game.

One of our pitchers, Steve Strom, even threw a no-hitter, though he was not experienced enough to know it. “We were like, ‘Oh my God, you just pitched a no-no,’” Hot Rod recalls. “And he said, ‘What’s a no-no?’”

The season we won the championship, our pitcher was Mark “Scooter’’ Thomas, then a 42-year-old Everett Herald employee and Vietnam War veteran. Unfortunately, he broke his ankle in a collision at home plate during our semifinal victory. In his place, his son, Mark Jr., pitched us to victory in the championship final.

Sadly, Mark Jr. died in 2014 from pancreatic cancer. Another player, Tom Verhulp, who played shortstop before Beethoven joined us, died from cancer as well this past summer.

So yes, the name Widowmakers can sound a little inappropriate now. Why did we call ourselves that, anyway? Well, we started as the Deadliners due to the connection several of us had with the UW Daily and its deadlines. Then Boog came up with the Widowmakers name after seeing commercials for monster truck rallies in the Kingdome, where competitors would race up the “Widowmaker” hill.

We made it to the IMA’s final four several times before. In the spring of 1989, we rallied from a 3-2 deficit in the championship game to beat the Residuals, 6-3, with Chip driving in two key runs in the bottom of the sixth. And boy, were we excited, especially when we received our IMA championship T-shirts.

Why did we keep playing? Because we loved softball and the IMA league was much more fun than other leagues. And we really wanted those championship T-shirts.

Alas, 28 years later, I must now sadly confess that the Widowmakers stretched the rules a bit. We did not gamble, cheat or take steroids. It’s just that very few of us were officially eligible as UW students. Chip and Sarge were borderline eligible because they worked in the school’s athletic department. We only had one actual student: Boog, who was then in law school at the UW. “I was the one legitimate player,” he says.

Most of the rest of us had already graduated from the UW, some as much as five years earlier. So why did we keep playing? Because we loved softball and the IMA league was much more fun than other leagues. And we really wanted those championship T-shirts.

A month after we won that championship, I moved to Minnesota to take a job covering the Twins for the St. Paul Pioneer Press. The rest of the Widowmakers stayed together and reached the summer semifinal game. That was when the opposing team pointed out that the Widowmakers were not currently enrolled at the UW and therefore were ruled ineligible.

I still have my IMA championship T-shirt as well as another keepsake. Before I moved to Minnesota, I had Ebbets Field Flannels owner Jerry Rubin make us old-style jerseys with each teammate’s favorite number on the back. They were definitely better jerseys than Luke’s Chevron shirt. Most of us still have those Widowmakers jerseys today. And why not? As the Wiggler says, we’re a “Band of Brothers.”

Each December, Sarge holds an annual Widowmakers Christmas party in which we gather at his home to share drinks, stories and presents. “Nearly every year, a teammate will attend Widowmakers Christmas for the first time and it’s like those 25-plus years never passed,” Sarge says. “He fits right back into the conversation and camaraderie.”

Sarge’s wife, Tricia, by the way, was one of the few “fans”—often the only one—who would attend our games. An enormous Cubs fan, Sarge proposed to her in front of Wrigley Field at the Cubs’ 1993 home opener. After marrying, the two went on to name their three daughters for the Cubs: Sammy (after Sammy Sosa), Kerry (after Kerry Wood) and Addison (after the street outside of Wrigley). Sarge, Boog and I also went to Wrigley Field to see the Cubs play their first night game in 1988 as well as the 2016 World Series, their first in 71 years.

So obviously, almost three decades later, we still love the game, even though we no longer play it (hey, we’re getting older). And we also take photos together at the Christmas parties. Fortunately, the photos are taken with camera phones, so the pictures are not double-exposed.

Jim Caple, ’97, wrote for the Seattle Post-Intelligencer and ESPN before becoming a freelance writer. And yes, he is still nuts for the Red Sox.