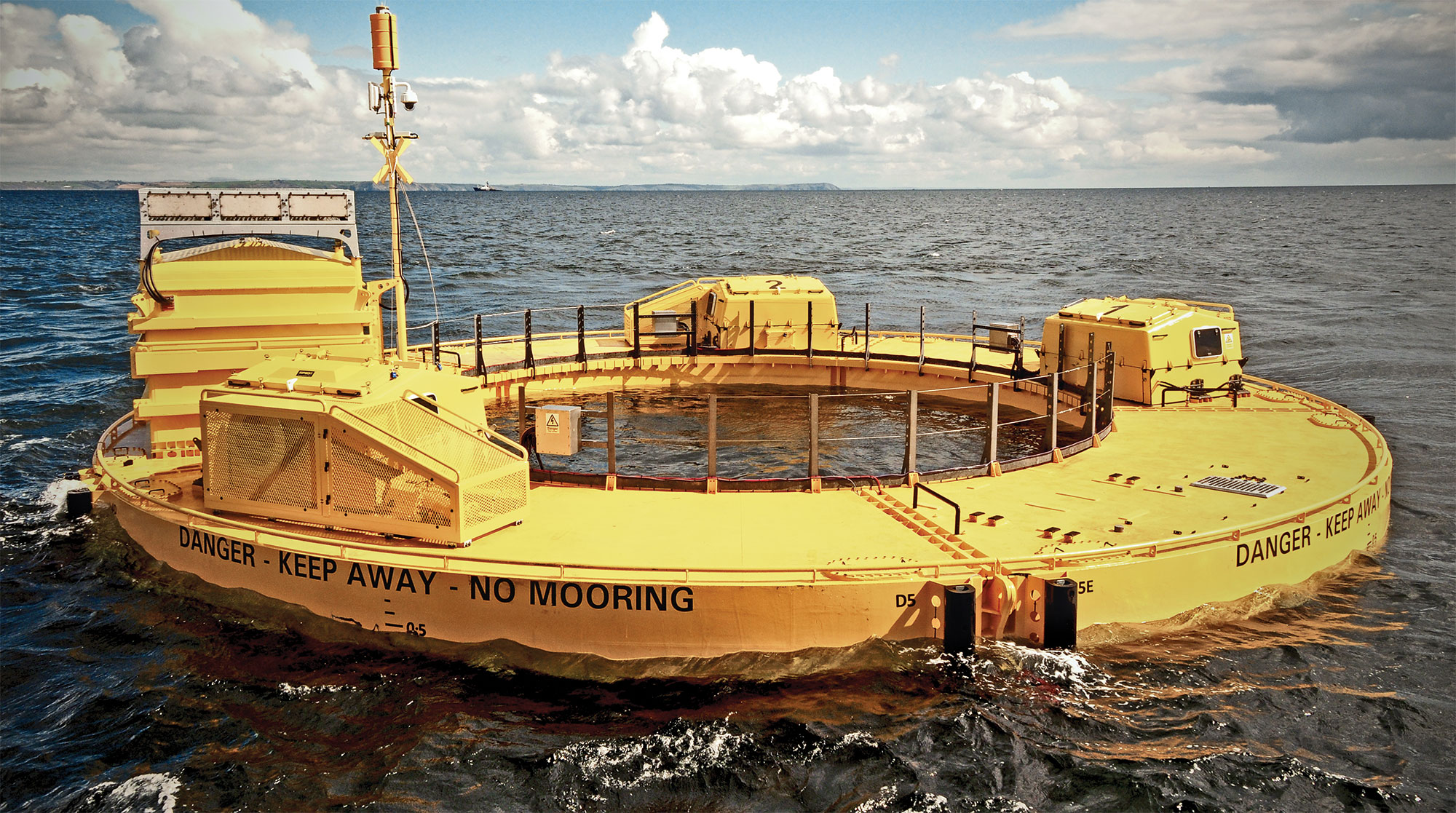 In the glorious Pacific Ocean waters off the windward coast of O’ahu, waves crash along the Kailua coast. But it isn’t just surfers who salivate over those ocean jewels. Scientists believe the motion of the ocean could bring the promise of something even more important: clean energy.

That’s why the U.S. Navy established the Wave Energy Test Site in Kaneohe, Hawaii. This location is currently the only grid-connected wave energy test site in North America and has hosted several wave energy converter tests.

Now don’t get carried away just yet. This power-from-paradise idea is light years from powering up the electrical grid to light up cities in the islands or anywhere else, if at all. But in the near future, wave energy may be the best option to generate power for undersea scientific stations, drones and sensors. This is why a team of engineers from the UW joined forces with a UW-incubated startup named WiBotic, the University of Hawaii, Europe-based Fred. Olsen Renewables, and the U.S. Navy on the project. At the UW, the experiment involved researchers, faculty and students from the Department of Mechanical Engineering and Applied Physics Lab.

Current testing of Fred. Olsen’s BOLT Lifesaver wave energy device has two primary aims: improving the reliability and power performance of the device through alterations to the device mooring and control strategy; and demonstrating an alternative means of powering oceanographic instrumentation without using utility-supplied electrical grid power or single-use batteries. This is the world’s first demonstration of the potentially transformative capability for wave-energy converters to enable persistent oceanographic observation and unmanned, undersea vehicle recharging without a cable to shore.

Brian Polagye, ’05, ’09, associate professor of mechanical engineering, runs a UW research group that focuses on the conversion of marine renewable energy resources (river, tidal and ocean currents, as well as waves) to mechanical power. His focus is not just how to capture and convert the energy from the waves but understanding the environmental impact of the wave energy converter equipment moored offshore. “Regulators want to know if turtles or other sea creatures are becoming entangled in the moorings,” he explains. “And to do this, we need to use a variety of sensors—sonar, acoustics, for instance. Studying this helps to make sure we can minimize our environmental footprint underwater.”

“Remember when wind energy started. Back then, all the turbines looked differently. Now they are the same. We are working to try to help industry figure this out.”

That’s critical because all of the forms of scientific equipment in the ocean requires power to operate. Till now, that meant the use of portable batteries, which are expensive and require a tremendous amount of effort and money to be replaced when they die. The wave energy converter being tested uses three removable power units that convert the motion of passing waves to electrical power by way of rotary electrical generators. That energy is then stored in a battery bank on the structure.

“Since I’ve been involved in marine energy research and development, the common assumption has been that these technologies (like the Lifesaver) would only be deployed in large arrays to provide power to coastal grids, in the same way as terrestrial and offshore wind do today,” Polagye says. “Projects like this one show that marine energy may, at least in the near term, be better suited to providing power in the open ocean where none is available today. For example, over the last month, if we had tried to run the Wave-Powered Adaptable Monitoring Package on battery power, we would have consumed the equivalent of several hundred automotive batteries. With the Lifesaver powering us, we can collect as much data as we want for as long as we want. That has the potential to transform how we think about coastal and ocean security, to say nothing of frontiers in ocean science.”

This project sure has had its share of challenges. First, Polagye and others thought powering the adaptable monitoring package would “only be slightly more complicated” than plugging it into the existing battery banks onboard the Lifesaver. Wrong. “This proved to be a poor assumption on my part,” Polagye recalls. The team from the UW’s Applied Physics Laboratory, particularly senior mechanical engineers James Joslin and Robert Cavagnaro, came to the rescue by engineering a power solution that could accept power from the Lifesaver, as well as a supplemental solar panel and store that power in another battery bank until it was needed—and they accomplished that from scratch in a matter of a few months.

Another challenge: how to communicate with the Wave-Powered Adaptable Monitoring Package—specifically how to get data back to shore for processing and remotely enabling and disabling systems. Then there was the challenge of how to adapt machine-learning algorithms to successfully track and classify targets from a platform that rolls with the waves in the unrelenting sea. Previous work in this area had been done with stationary sensors, not sensors subjected to constant motion.

“Harnessing energy from ocean waves is a very challenging endeavor,” says Bob Frederickson, a Navy engineer. “Remember, we are dealing with elements that are corrosive. It is expensive to build and install the equipment and conduct these experiments. We had to design a device that could survive in a harsh environment for a long time. The equipment and moorings take a beating because the ocean never stops moving.

“But it is developing. Remember when wind energy started. Back then, all the turbines looked differently. Now they are the same. We are working to try to help industry figure this out.”

The current subsea monitoring sensor package (otherwise known as the Wave-Powered Adaptable Monitoring Package) was developed by the Pacific Marine Energy Center at the UW. That project yielded promising results. “The final stats showed it was 84 percent “uptime” over a three-and-a-half month period, which compares quite favorably to the 90 percent “uptime” we’ve had on systems cabled back to shore,” Polagye says.

WiBotic is a startup that was born out of the UW’s CoMotion Center in 2015. Its core technology was developed by co-founders Ben Waters, ’12, ’15, and Joshua R. Smith, UW professor of computer science and engineering, and electrical engineering, and offers a variety of wireless charging and power management solutions for drones as well as mobile and underwater robots. WiBotic created the wireless power-transfer system that takes power made by ocean waves and transmits it to undersea equipment in need of juice.

What does the future hold? Maybe undersea power-transmission cables—a very costly venture—won’t be needed as often. That will be a boon on the environmental front because it’s imperative that cable not be laid in sensitive areas, such as where eel grass or coral live. And then there is the possibility of mainland uses—can the energy generated by the sea ever be connected to the grid? That would mean no need to use fossil fuels to power places, especially isolated, populated islands like Diego Garcia, which is nearly 2,000 miles away from the Indian mainland.“Generally, we are pleased with the project,” Frederickson, the Navy engineer, says. “This is a difficult problem to solve, but we are seeing progress.”