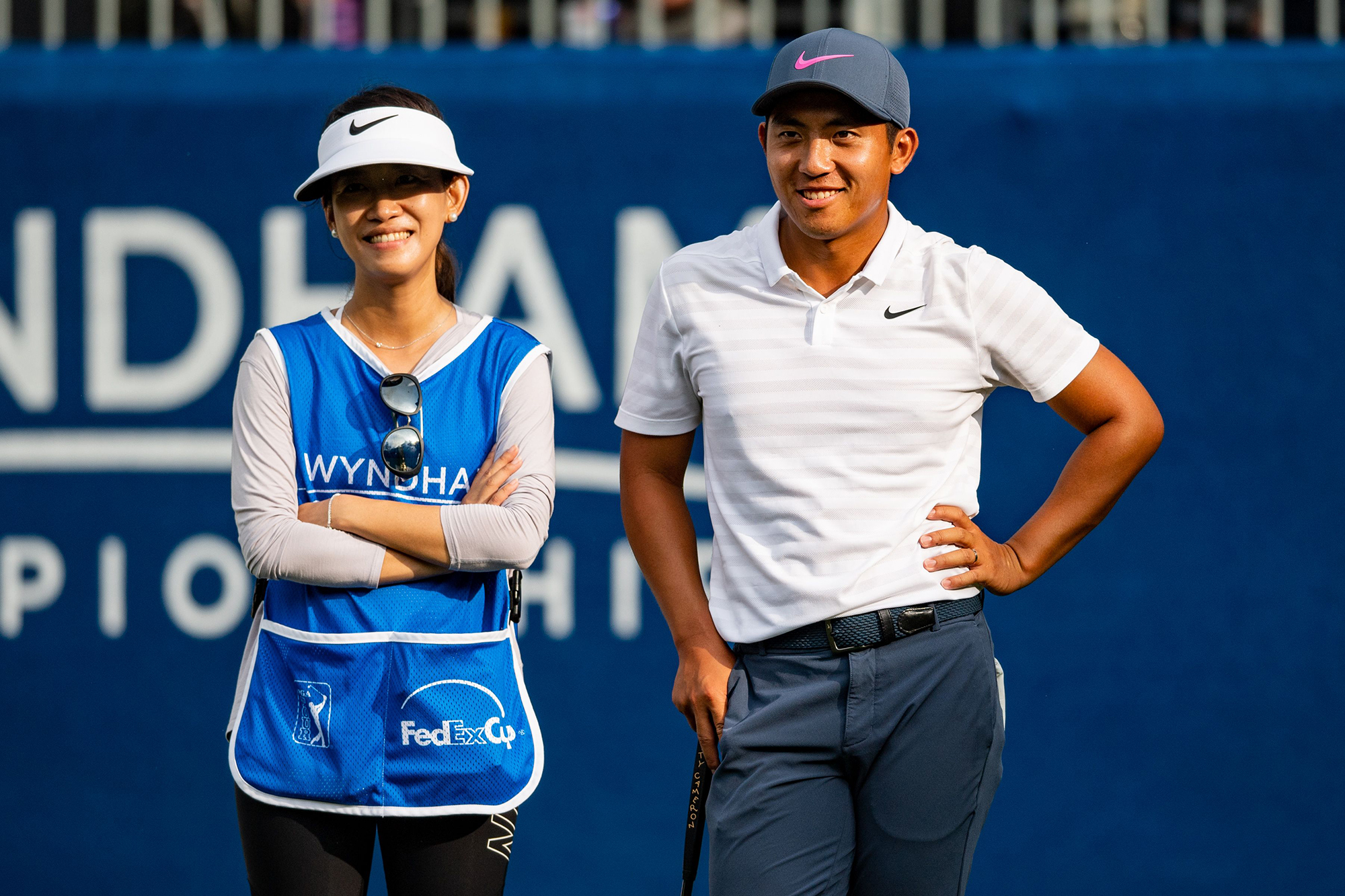 The top Husky on the PGA Tour fell just short of winning his first tournament, tying for second place in the Wyndham Championship. His wife was with him for every swing.

Now in his fourth year as a professional golfer, Pan Cheng-tsung (better known as C.T. Pan) is still on the hunt for his first victory on the PGA Tour—an elite feat that many who play the sport never accomplish. That almost changed for Pan on August 19, when he surged to the top of the leaderboard in the final moments of the Wyndham Championship.

Here’s where things get interesting (and kind of adorable): Pan, ’15, couldn’t find a local caddie for the tournament, which was hosted in Greensboro, North Carolina. So he asked his wife, Yingchun Lin, to carry his bag and counsel him on the course. After considering it for two days, she agreed to don a Nike visor and blue vest and lug her husband’s clubs for the weekend.

August 17, the second day of the tournament, also happened to be Chinese Valentine’s Day. That may explain why Pan was seen carrying his own bag on several occasions.

Guess who is on my bag this week? This is the true test of my marriage; hopefully, she will still be with me by the end of tournament. @wyndhamchamp #pgatour #golf #liveunderpar #therealboss #teamPan #golfishard pic.twitter.com/h3YCe3xceD

His wife’s presence seemed to be a lucky charm for Pan, as he shot up the leaderboard and eventually took the lead on the final day of play. He sank crucial putts with poise. He drove onto fairway after fairway. And he even overcame the terrible luck of having his ball land inside a sand-filled divot.

But Pan’s streak came to an end as he took the tee on the 18th and final hole. Tied for the lead, he drove his ball out of bounds. In a game where every stroke counts—and shooting out of bounds costs an extra stroke—the mistake erased Pan’s chances at a tournament victory.

Co-leader C.T. Pan goes out of bounds with his tee shot on the 72nd hole. pic.twitter.com/tw06sQsrCQ

Despite the errant shot, Pan remained in good spirits, laughing with his wife on the walk up to the 18th green. Earlier in the day, the TV commentator had noted that Pan showed no signs of negativity throughout the weekend—only positive emotions.

All smiles for C.T. Pan with his wife/caddie after an impressive tournament.

It’s the end of the week.@CTPanGolf finishes tied for second.

Pan double-bogeyed the hole and finished the tournament tied for second, shooting 18 under par. It was one of the best performances of his young career. He outshone golf legends like Jim Furyk and Sergio Garcia, and he’s only finished second in one other tournament, the 2017 Farmers Insurance Open. (Pan has won two PGA Tour Canada tournaments.)

Thanks to Pan’s performance at Wyndham, he’s now ranked 134th in the world. And there was one other thing to smile about on that walk to the 18th green: $528,000 in prize money.