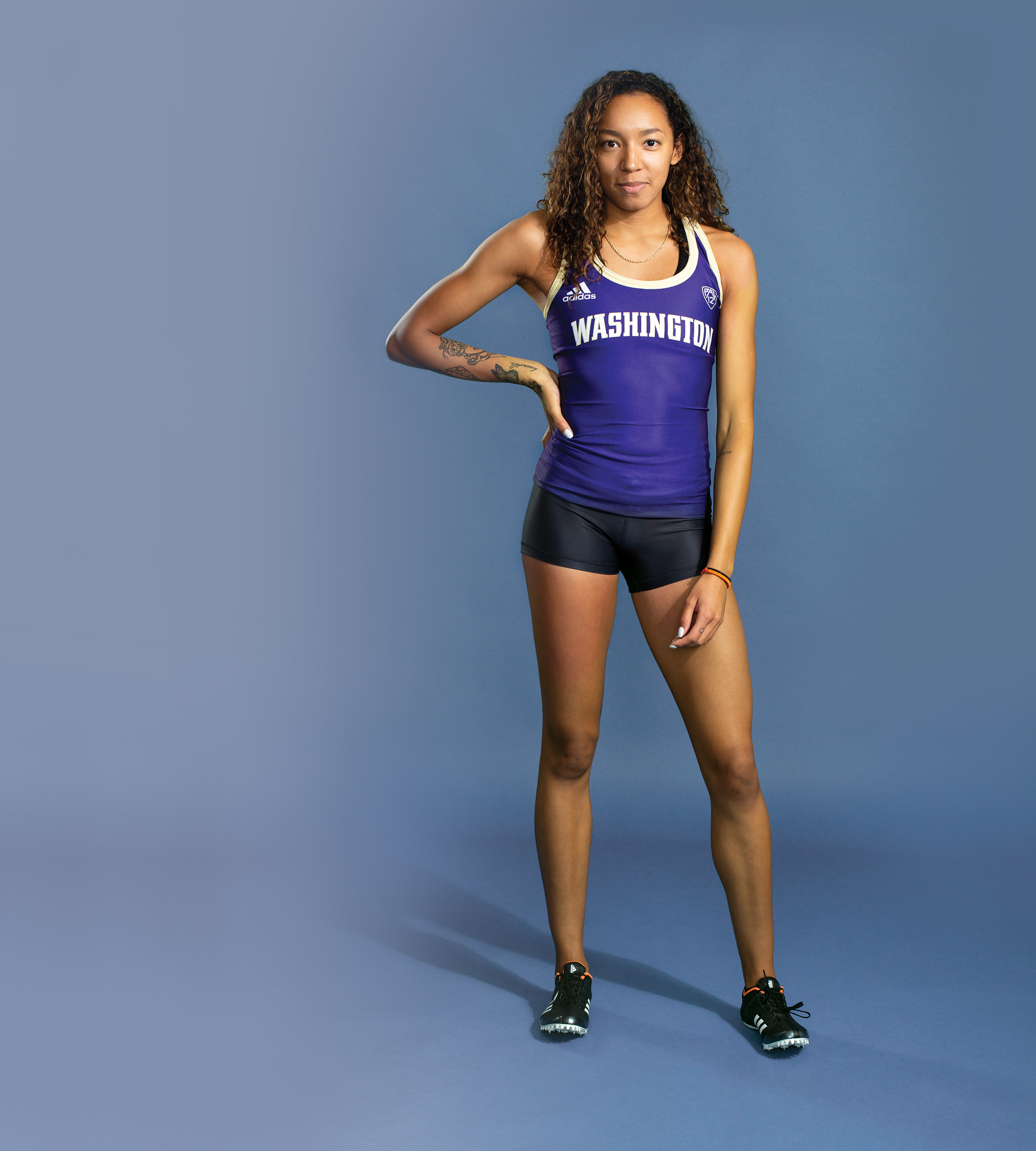 She didn't always love to run, but Darhian Mills eventually
hurdled 400 meters faster than any woman in UW history.

If you ask Darhian Mills how she got started in track and field, brace yourself for her answer: “I don’t like to run.” Funny, seeing how the fifth-year grad student from Bothell holds the school record in the 400-meter hurdles and earned first team All-America honors last year.

How did you get into running?

I started running my sophomore year of high school. I really did not like running. I did every other sport that didn’t have running. I really wasn’t an active kid. I liked being at home and staying inside. And then in ninth grade, my dad took me to one of his longtime friend’s daughter’s track meet. And I was like, ‘OK, this is kind of cool.’ … I started because my parents didn’t want me to sit on the couch anymore.

How did you get so good at it?

I think a lot of it was natural. Running for every great athlete is a natural thing. And constantly working at it—training my body, training my eating habits. It’s a huge mental game as well. Once I realized that I do kind of like running, I love the sport and I love hurdling, I just want to be better at it.

How did you choose the UW?

I received letters from Michigan and schools on both coasts, but because it was so late in the game, I didn’t have a lot of colleges fighting over me. I initially wanted to move to California for the sun. But I realized then I wasn’t ready to leave my family yet. I just wanted to be as close as I could but far enough away to have my own independence. Washington just felt like a great fit.

The short hurdles are so much fun, but they’re definitely like my Achilles heel because they are so quick. If you mess up, you don’t have any time to fix it. But I love the 400 hurdles, because if you mess up, it’s OK. You have however many meters left to fix it. You’re always focusing on the next hurdle, the next hurdle. Every time I tell somebody who doesn’t run track that I do the hurdles, they’re like, ‘Oh my god!’ You’re not supposed to run full speed at an object, but we do it. Mostly with grace.

What has been your favorite race?

I guess it would be when I broke the school record. That was the second round of West Regional Preliminaries. Once I crossed the finish line and looked up, I had forgotten what the school record was, so it didn’t hit me. I was tired after the race, and was resting my hands on my knees. Then I looked up again and I realized, ‘That’s the school record, and that’s what I’ve been wanting since I came here.’ It was one of my biggest goals, and I reached it.

What are you majoring in?

I’m a fifth-year graduate student. Last year, I received my bachelor’s degree in communication with a minor in diversity. Currently, I’m in a one-year master’s program in Intercollegiate Athletics Leadership. We focus on athlete administration and coaching.

Are you aiming to participate in the 2020 Olympics?

The U.S. team is stacked with many amazing 400 hurdlers, so it is a difficult team to make. But I’m one-quarter Filipino, so I might be able to run for the Filipino national team.

Do you want to be a coach?

Yes. Eventually I hope to run professionally after college, then become a coach. I really want to work in athletic administration, maybe become a Division I athletic director. Those are the goals.