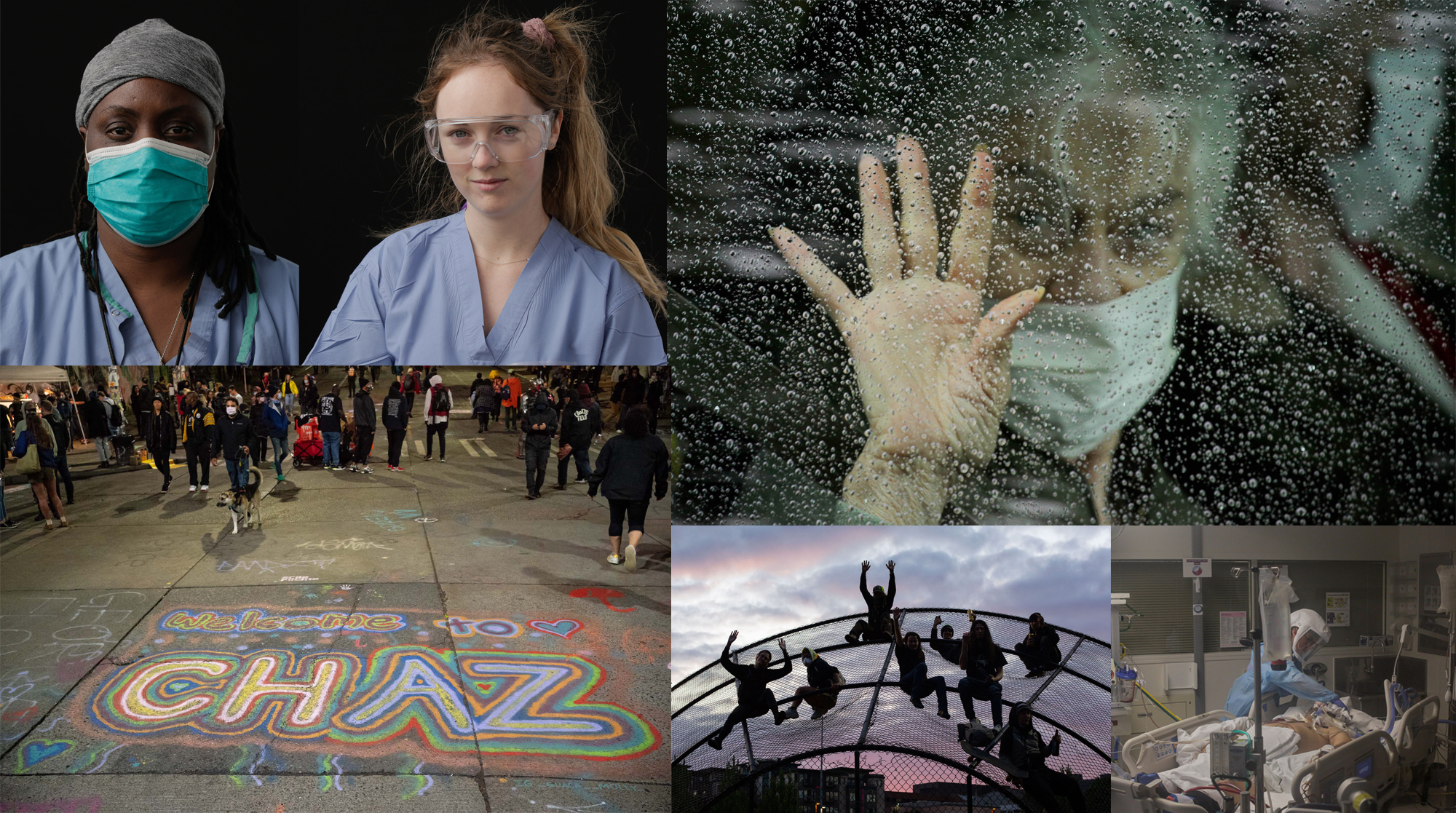 Frontline photographer: David Ryder has documented the pandemic since the first U.S. case

David Ryder, ’06, ’11, has become one of the major photographers of our pandemic year, capturing images of the outbreak and response, of political upheaval and of race and equity activism. 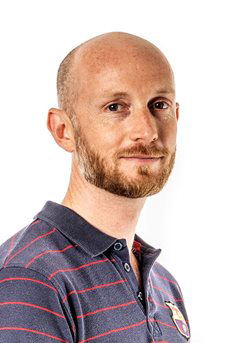 His images—set in the Pacific Northwest—have been seen around the world. He was one of the first to shoot the sites of the outbreaks. He also covered travelers stranded at the airport, the presidential race and political fallout, the detention of undocumented immigrants, health care workers coping with the pandemic inside hospitals and out in the streets, last summer’s protests of the killing of George Floyd at the hands of police—and the looting aftermath, and the Capitol Hill Autonomous Zone, to name a few. He captured conflict and protest as well as quiet, human moments of care and grief.

For his work documenting the tumultuous year, Ryder was recently recognized as UW Bothell’s Alumni of the Year recipient.

One of the most iconic images of the year is the Time magazine cover of a mother and daughter at the Life Care Center in Kirkland, the nursing home that became site of the first U.S. outbreak, that Ryder shot in March 2020. 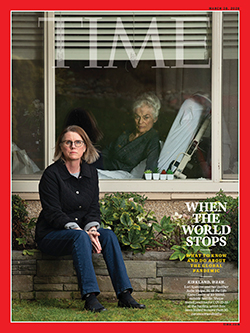 “It was a little bit of luck and a wild, last-minute thing that came together,” he says. The morning Time called, David was working on a long-range assignment at the facility for Reuters, an international news organization. He turned the project down at first, but then the Reuters editor agreed Ryder could take on the cover shoot.

Ryder describes taking the picture as kind of a guerilla event. The public was prohibited from coming with 100 feet of the facility, so Ryder had to shoot from the sidewalk with a 400-millimeter lens. With the help of a phone and the family, he was able to pull it off. On the day of the shoot, Judie Shape and her daughter Lori Spencer were perched on either side of a window at the center. Spencer’s husband Michael was nearby holding Ryder’s light and a phone for relaying Ryder’s requests to mother and daughter. The shoot that took about 15 to 20 minutes ended up being one of Time’s covers of the year for 2020.

Here are some of Ryder’s images from the year: 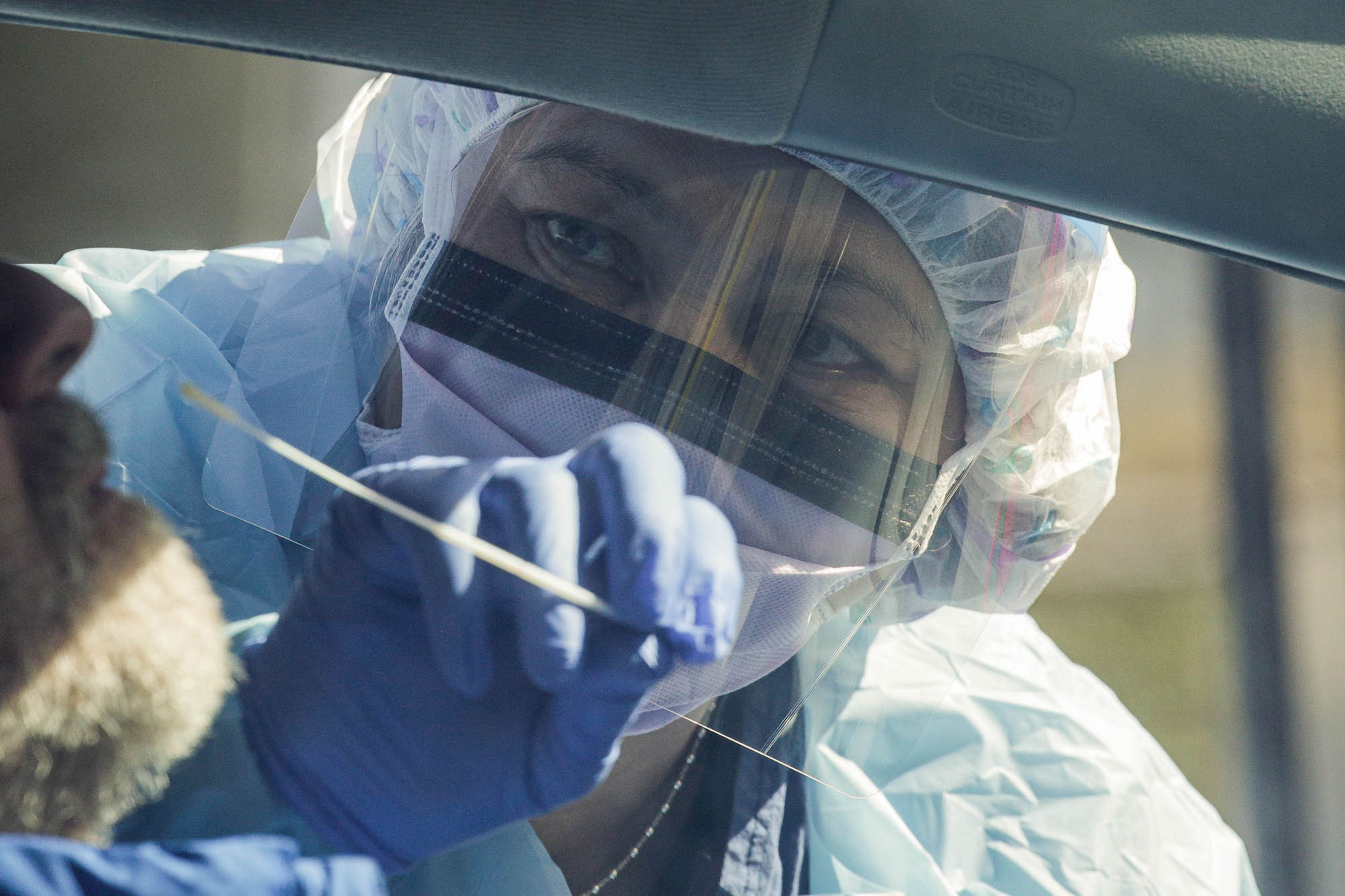 Nurse Theresa Malijan administers a test for coronavirus disease (COVID-19) to a patient at a drive-through testing site in a parking lot at the University of Washington’s Northwest Outpatient Medical Center on March 18, 2020. 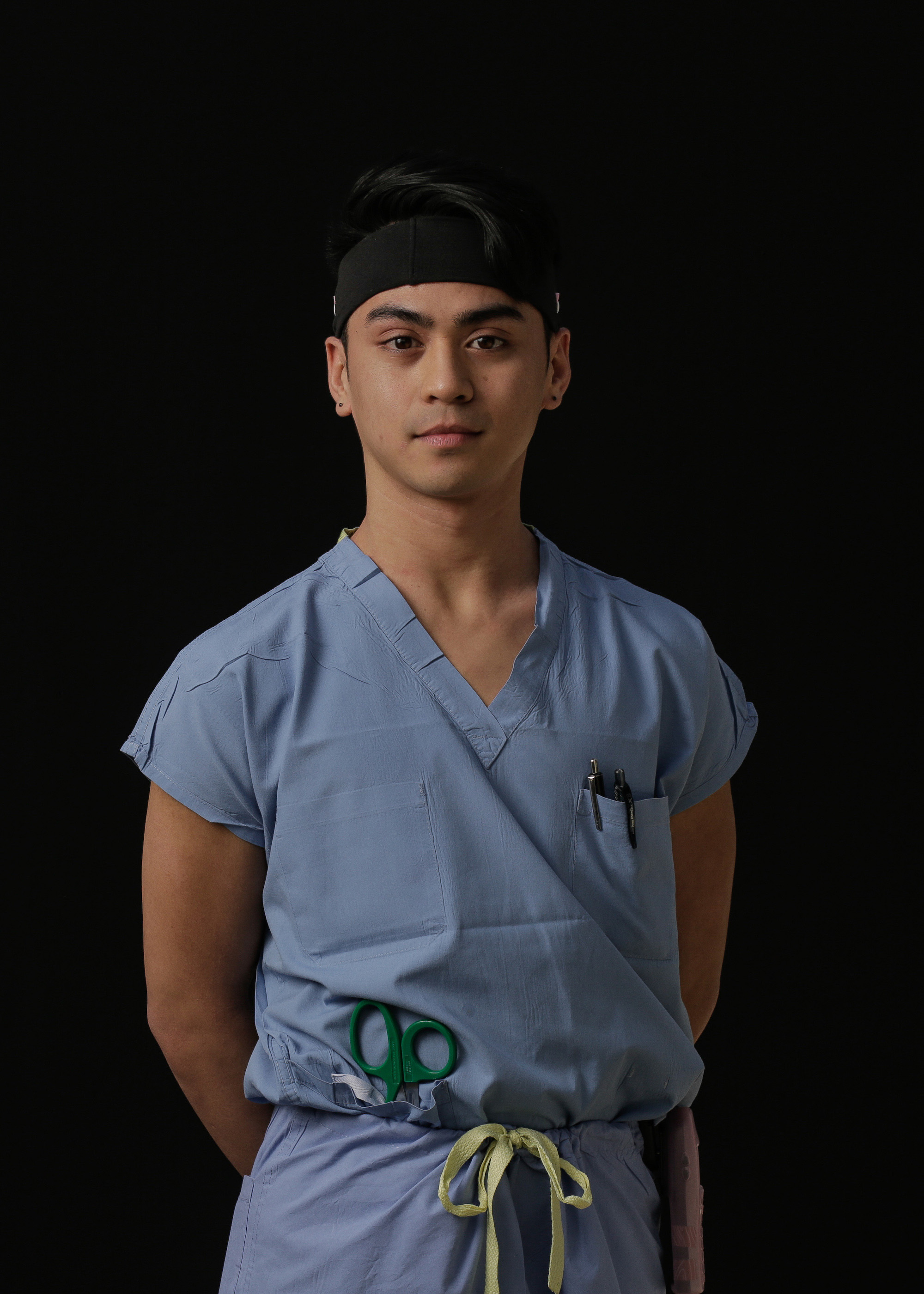 André Mattus, a patient care technician in the emergency department that works as a “dofficer” to help colleagues safely doff their personal protective equipment, poses for a portrait at the University of Washington Medical Center. 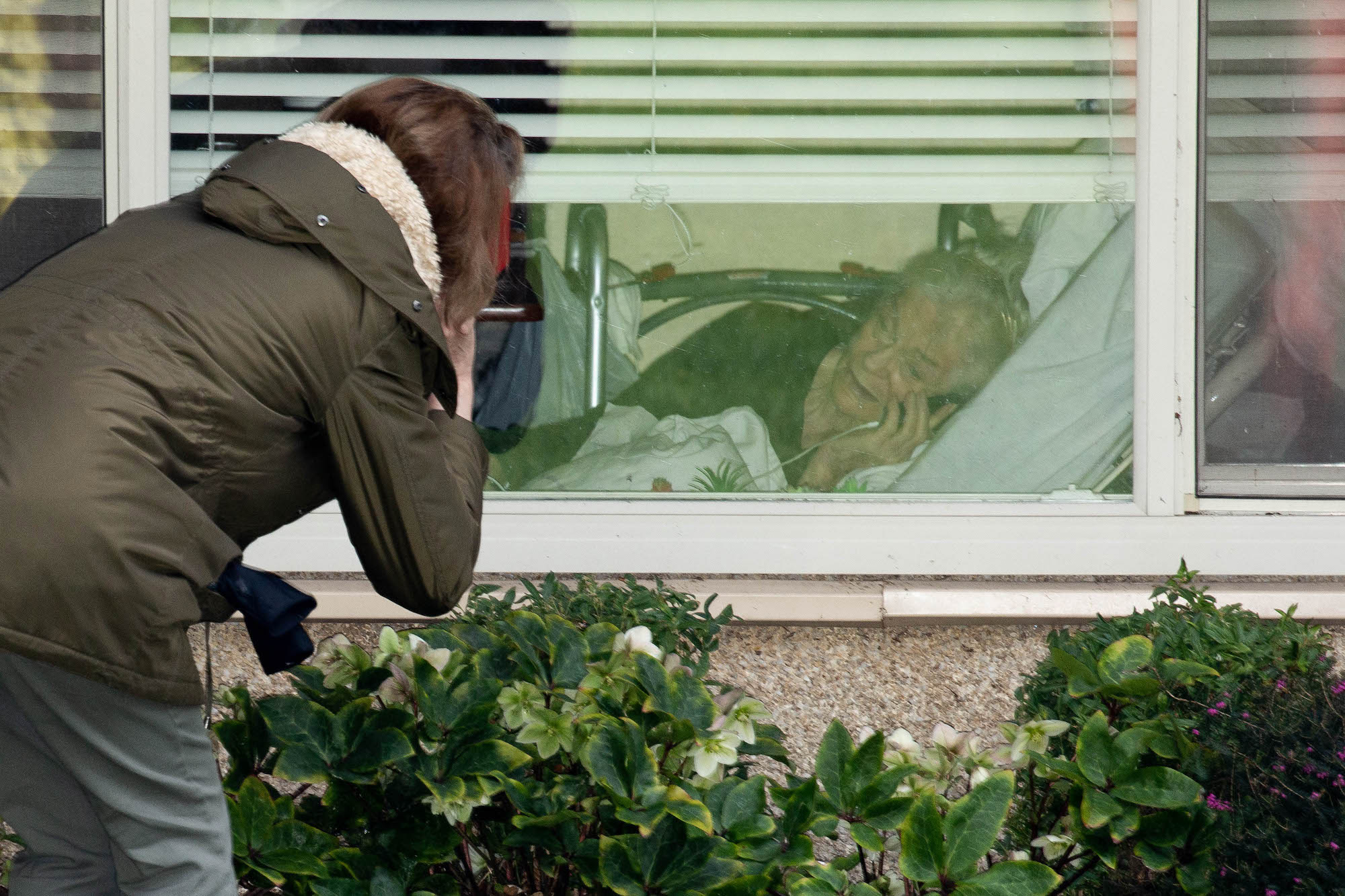 Lori Spencer talks on the phone through a window with her mother, Judie Shape at the Life Care Center of Kirkland on March 8, 2020. 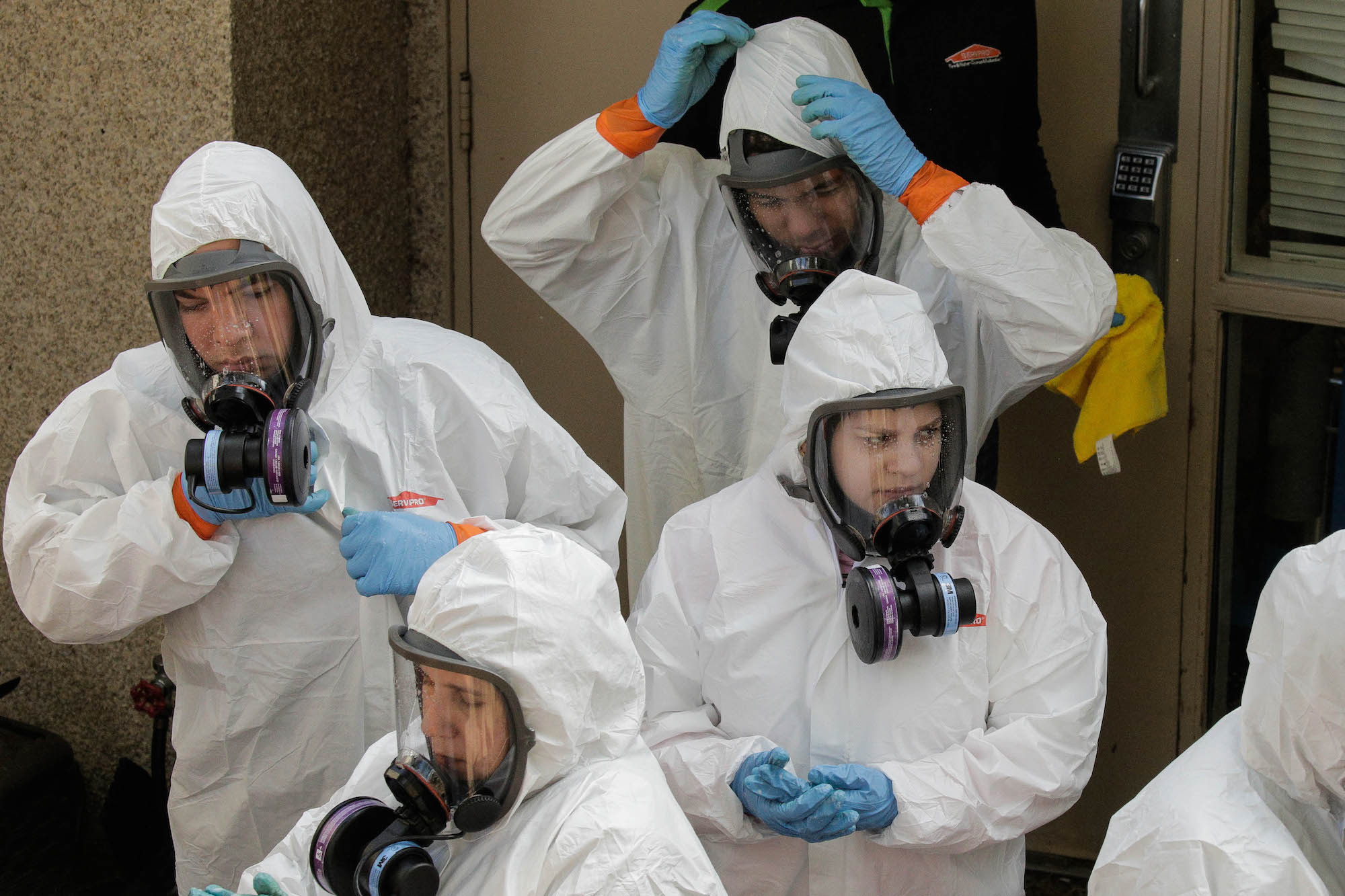 A member of a cleaning crew waits while her mask is cleaned upon leaving the Life Care Center of Kirkland on March 12, 2020. 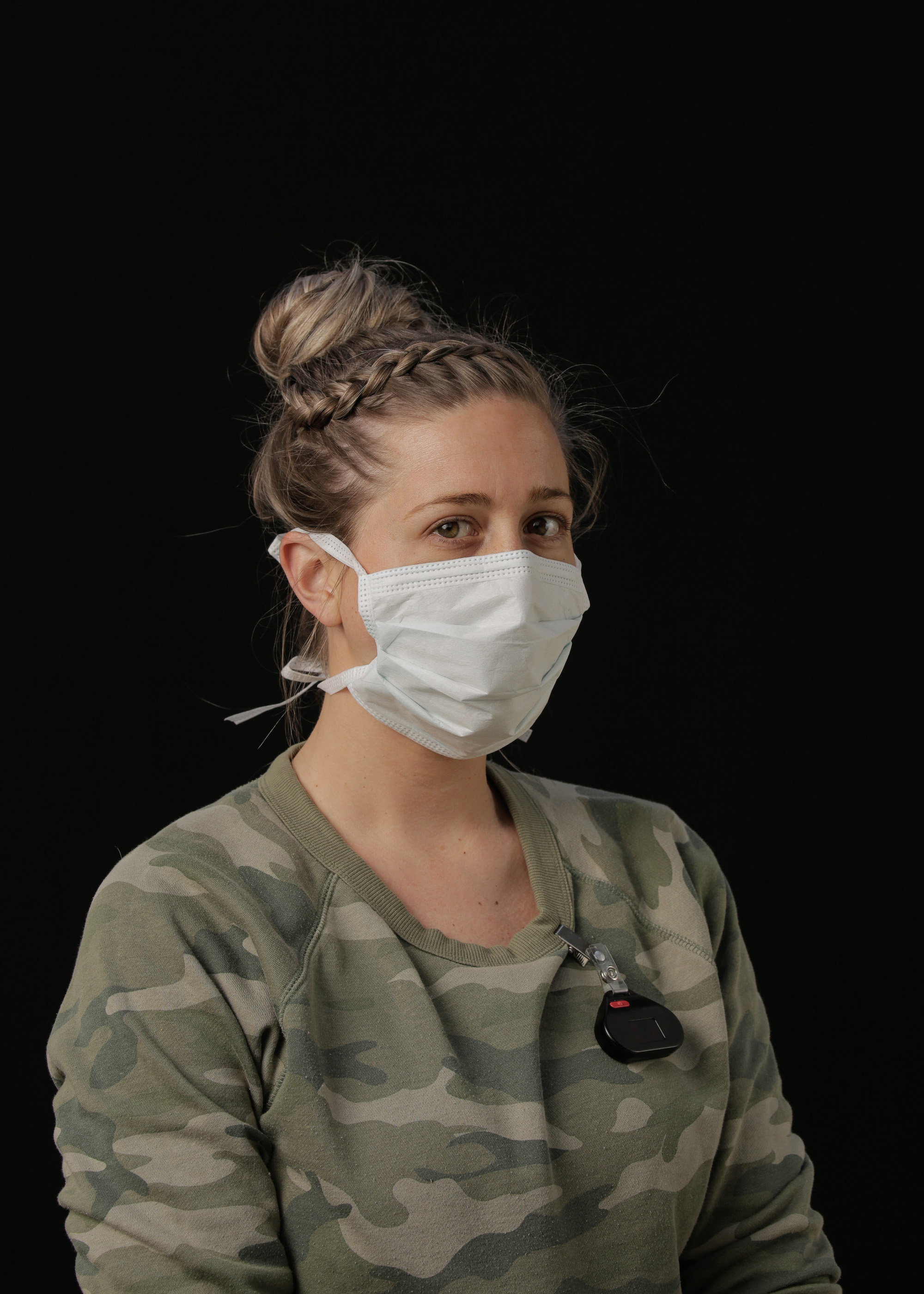 Landi Tillis, a nurse on the acute care resource team that cares for COVID-19 patients, poses for a portrait at the University of Washington Medical Center. 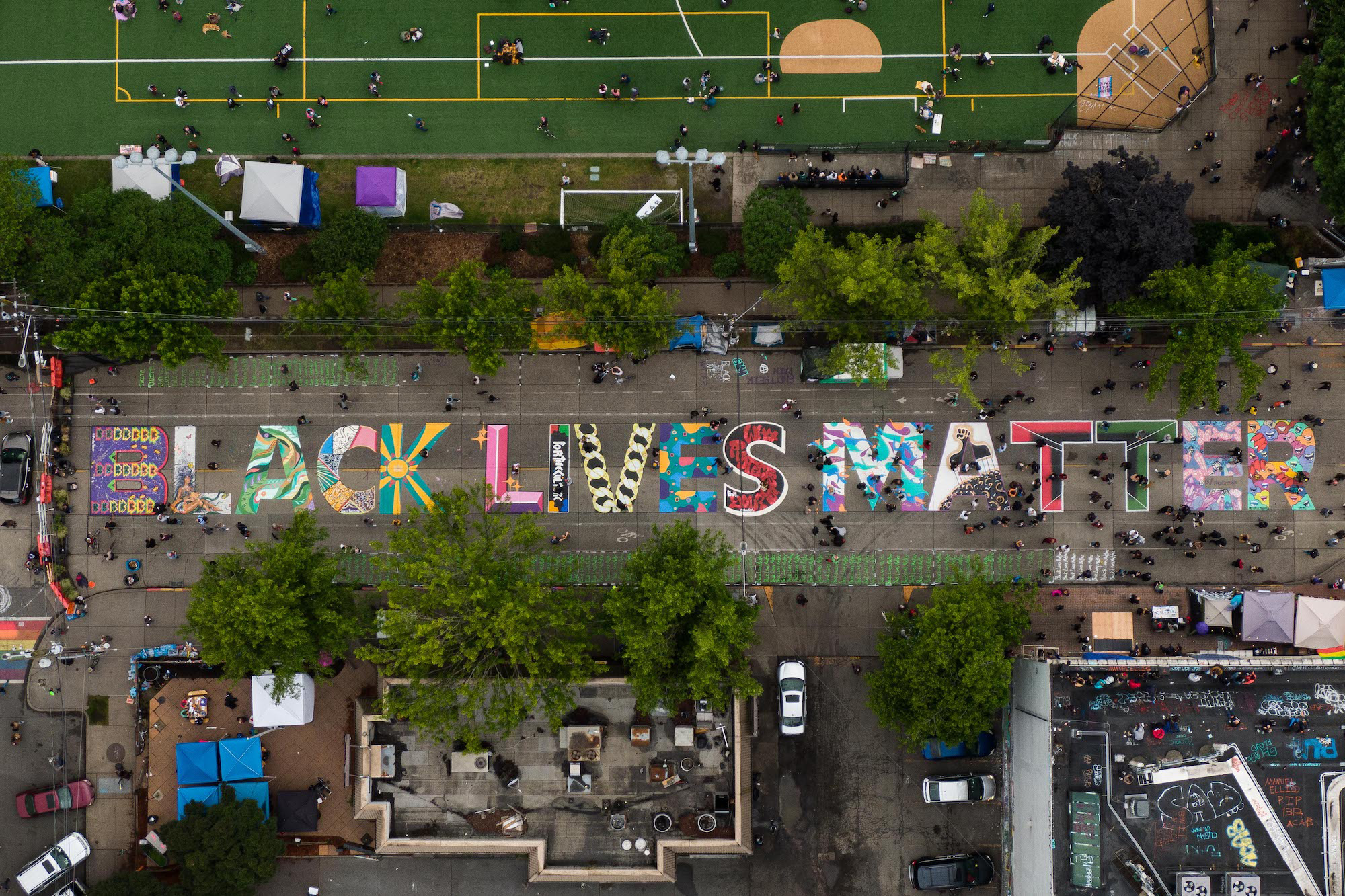 An aerial view is shown of a street mural in the Capitol Hill Autonomous Zone, surrounding the Seattle Police Department’s East Precinct in June 2020. The precinct was abandoned by police after violent clashes between police and Black Lives Matter protesters in the wake of the death of George Floyd. 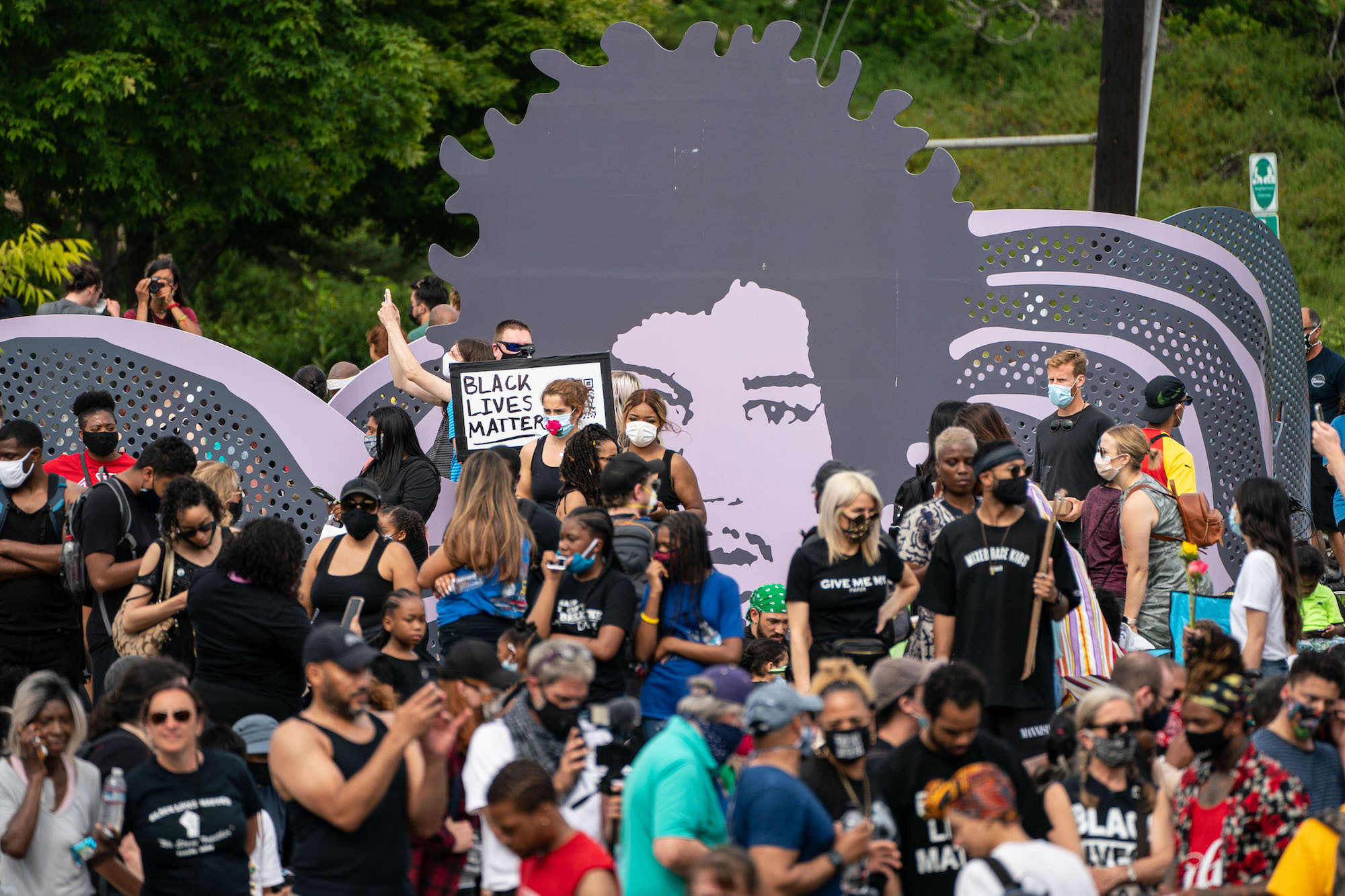 People gather near an art installation resembling Jimi Hendrix at Jimi Hendrix Park during the Juneteenth Freedom March and Celebration. Thousands of Seattleites showed up to celebrate the Juneteenth holiday, which started with a march and culminated with an event featuring speeches, entertainment, a celebration of Black graduates, and more. 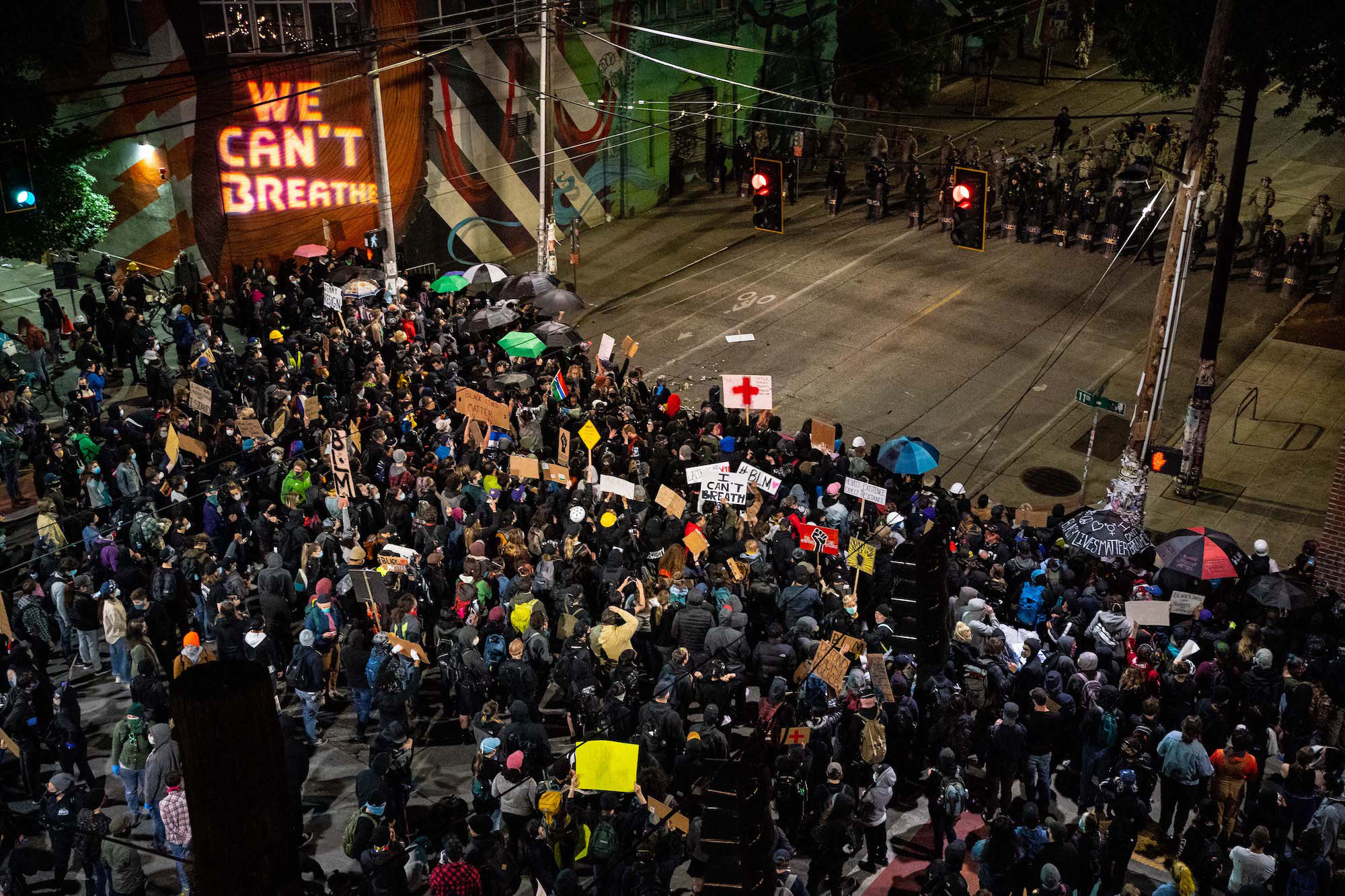 People demonstrate outside of a police precinct in protest of the death of George Floyd. The peaceful protest lasted for hours throughout the day and late into the night.

Pictured at top (clockwise from top left): Polysomnographic technician Teresa Bryant and nurse Mackenzie Gray pose for portraits at Harborview Medical Center; Judie Shape, 81, who had been diagnosed with COVID-19 and was a resident at Life Care Center of Kirkland, photographed on March 26, 2020; nurse Leah Silver cares for a COVID-19 patient in the COVID ICU at the University of Washington Medical Center; people demonstrate outside of a police precinct in protest of the death of George Floyd; and spray paint on the street welcomes visitors to the Capitol Hill Autonomous Zone, surrounding the Seattle Police Department’s East Precinct.

To see more of David Ryder’s work, click on the image below to go to his portfolio. 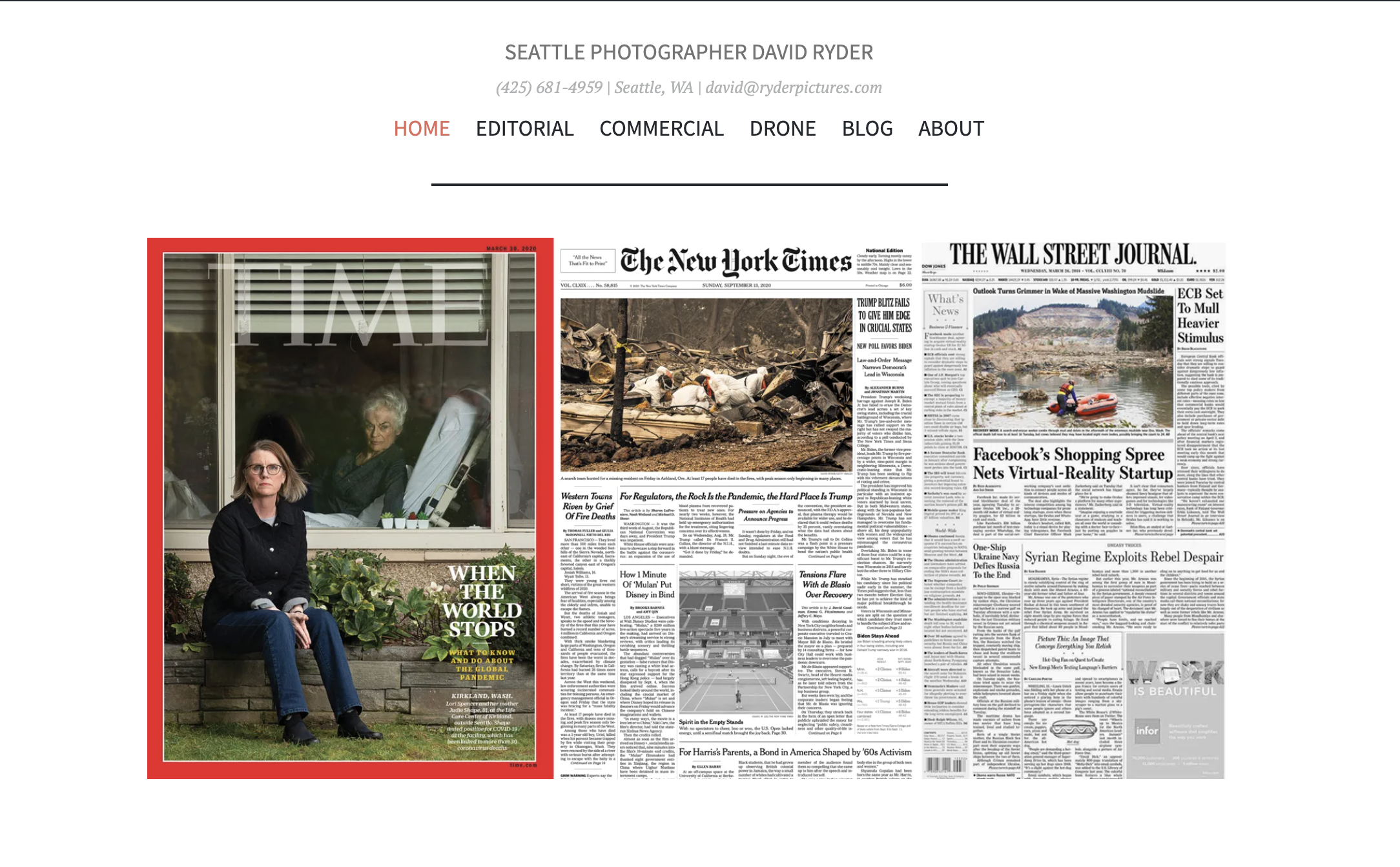