Doctor shortage has a Spokane solution

It is 4 o’clock in the morning when Tom and Allison Gray’s three-year-old spikes a fever that climbs to 105 degrees. The Grays live in Metaline Falls, a community of 238 residents tucked in Washington’s upper northeast corner near the Idaho border, miles from their primary-care physician. They race to the clinic only to discover that the doctor, who regularly works 80 hours a week because she’s the only doctor for miles, has taken her first vacation in nearly three years.

There simply aren’t enough doctors in rural and underserved areas like Metaline Falls. That is why the University of Washington has been working with the Spokane community to establish all four years of medical school in Spokane. The idea is to encourage more students to attend medical school and residency programs near the Eastern Washington communities they grew up in and love, with the goal that they will return to those communities to practice.

The University of Washington serves as the medical school for a five-state region through an innovative medical education program that began 42 years ago called WWAMI (Washington, Wyoming, Alaska, Montana and Idaho). The program’s strengths are in its partnerships. (In its current format, medical students from these states and rural Washington take one year of classroom training at a partner university—in Washington, that partner is Washington State University—and the second year at the UW School of Medicine’s Seattle campus. After that, students begin their clinical rotations in rural areas in their home states and across the WWAMI region). By partnering with local state institutions to offer medical education, the UW is able to provide students with the highest quality medical education in the nation—at lower cost than “stand-alone” medical education programs. The education offered is the best around—the UW School of Medicine has been ranked by U.S. News & World Report as the No. 1 program nationally in primary care for 19 of the past 20 years and No. 1 in family medicine and rural health for 23 consecutive years. Since its inception, WWAMI has educated and placed numerous doctors in Eastern Washington.

“At the University of Washington, we asked ourselves, ‘How are we going to produce the next generation of health-care leaders and providers without adding new and unnecessary costs to our health-care system?” says Dr. Paul Ramsey, CEO of UW Medicine and dean of the UW School of Medicine. “That’s where the idea of Next Generation WWAMI began.” 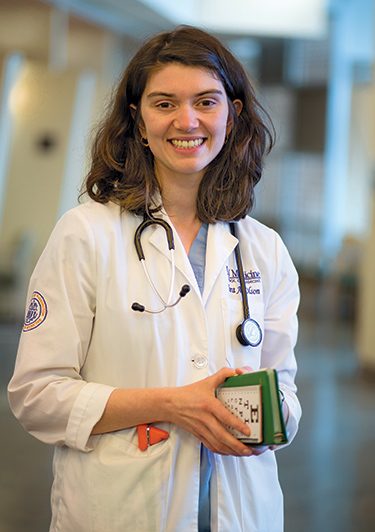 By placing medical students like Tara Olson in small, rural towns like Grand Coulee (pop. 1,041) as part of the Targeted Rural Underserved Track, the UW’s WWAMI program is developing physicians to serve areas throughout Washington state.

WWAMI broke the mold of medical education when it was launched in 1971, and Next Generation WWAMI aims to do it again with Spokane as its center.

“People ask me, why Spokane? Why now?” explains UW President Michael K. Young. “It’s simple, but profound. First, we are not the University of Seattle. We are the University of Washington. We are here to serve all of Washington state. Second, Spokane is the largest medical hub between Seattle and Minneapolis, and its community is an absolute force to be reckoned with. They not only want to grow the health-care economy in Spokane, but they want to be seen as a national model for health-care innovation. And that is exactly what we support, stimulate and create. It’s a perfect partnership.”

And it’s a partnership that is already gaining momentum. A group of dedicated community members recently raised $2.2 million in private funds to help fund a pilot program so medical students could choose to spend all four years of medical school in Eastern Washington. It would be the first permanent, four-year medical-education program outside Seattle in the five-state region. Next year, the UW will head to Olympia with an ambitious agenda to quadruple the number of medical students in Spokane classrooms from the current 20 students per class, and rapidly expand new residency opportunities in Eastern Washington and other underserved communities around the state.

Kevin Brown, ’04, participated in the WWAMI-Spokane program, and spent his second year of medical school in Spokane. Brown, who has a degree in construction management from the UW, is also participating in a specialized track called TRUST (Targeted Rural Underserved Track) that gives students multiple opportunities to work in a small community under the wing of a physician mentor, an experience that goes beyond learning anatomy in the classroom.

Brown is getting his small-community experience in Grand Coulee (pop. 1,041), which is in the rolling hills of Eastern Washington two hours west of Spokane. “The meat and potatoes … is the prolonged exposure to rural medicine,” explains Brown, who will spend six weeks in Grand Coulee this summer and another five months there during his third year. Students like Brown are immersed quickly in the clinical aspect of medicine in these small-town settings, an experience not always available to students enrolled in big-city medical schools. 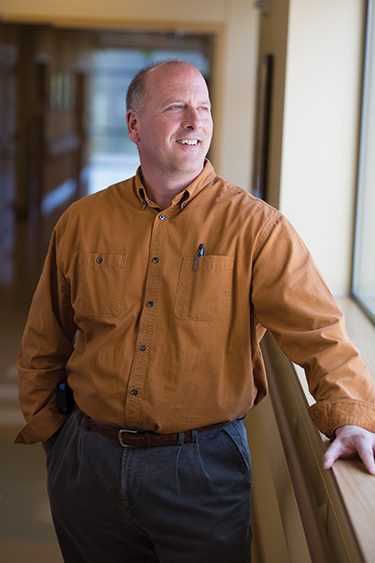 “Right out of the gate, I was asked if I wanted to scrub in for a hysterectomy,” Brown says of his experience after being paired with his mentor, Andrew C. Castrodale, ’89, ’94. “How cool is that?” Likewise, patients are happy to have medical students attend their clinic appointments because they really want students to come back after medical school to practice.

Another medical student, Sophie Clark, delivered a baby on her first day in Ellensburg. Her mentor physician, Mark Larson, talked her through the procedure in advance and supervised the successful delivery, but the thrill was all Clark’s. The product of a small farming community, she knows firsthand the importance of access to quality care.

“Everyone should have access to good health care,” she says, “and I hope to be able to contribute to this goal as a doctor.”

The Spokane community—which has actually hosted WWAMI clinical rotations for the past four decades—has done more than just provide seed money to expand the program. Three years ago, Spokane resident Mari Clack, ’58, a former UW Regent, and her husband, Dave Clack, ’57, joined John Coulter, a retired top administrator in UW Medicine’s Medical Affairs, and his wife, Ann, in reaching out to WSU and UW alums as well as others in the community to start “Friends of WWAMI Spokane.” Informally known as the “364 Club,” the group supports medical students, providing scholarships, financial support for stress-management classes and hosting social events that let students know how glad the community is to have them studying in Spokane.

“We call it the 364 Club because we work together 364 days a year but there is one 24-hour period when we may not speak—and that’s Apple Cup,” Mari says. She takes a personal interest in the medical students, attending the “White Coat Ceremony” when a medical student is given a stethoscope and for the first time puts on the traditional symbol of doctoring—the white coat. (This occurs just before medical students begin working with patients.) Before last fall’s ceremony, a young student approached Mari, and admitted, “I don’t know if I can do this. I don’t think I can wear the white coat.” Clack knew exactly what to say.

“I said, ‘When you put your arms in the sleeves and you get the stethoscope, what you are doing is promising to do your very best. And I want to be there to see you put it on’,” recalls Clack. 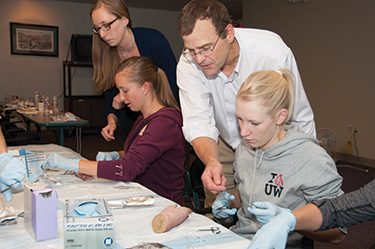 UW medical students practice suturing under the careful eye of their instructors as part of their WWAMI medical education.

This kind of community collaboration is what has made the program not only a success but also a model for the rest of the country, according to Ramsey. He points out that expanding the program in Spokane means more than just better access to care—it is about building a strong regional economy and community. The Spokane business community firmly believes that growing the city’s biomedical and health-sciences campus will also generate economic advantages for the region. For instance, Rich Hadley, who recently retired as president and CEO of Greater Spokane Incorporated, says that if the medical school can grow to accommodate 120 students per class per year by 2030, the community will enjoy a $1.6 billion economic impact—including the creation of more than 9,000 jobs.

John McCarthy, ’90, ’92, a family medicine physician who spent 14 years in the small community of Tonasket (pop. 1,025), is the assistant dean for Eastern and Central Washington. He says the picture has changed radically. “The landscape six years ago,” he says, “was a limited understanding in the community of what medical education was all about.”

Tom Simpson, ’82, who lives in Spokane and serves on the Foster School of Business Advisory Board, says medical education is a key part of the city’s emerging university district. As an angel investor (who provides financial backing for startups or entrepreneurs), he believes having the four-year program will help develop life-sciences research in the community.

As the need for health care increases in Washington, the University of Washington stands ready to meet the next wave of our communities’ needs. “Nobody should have to wake up with a sick child and worry about whether their doctor is on vacation,” Ramsey says. “Next Generation WWAMI was conceived with families like the Grays in mind. With clear vision and strong partnerships with Spokane and the state, the future of WWAMI and its impact on Washington communities is very bright.”

Students complete a curriculum similar to and compatible with that of the UW School of Medicine’s while attending universities in their home states:

Only Spokane offers second-year classes (subject to permanent state funding). All other students attend classes at the UW School of Medicine in Seattle.

Students return to their home states or other sites throughout the WWAMI region for clinical rotations.