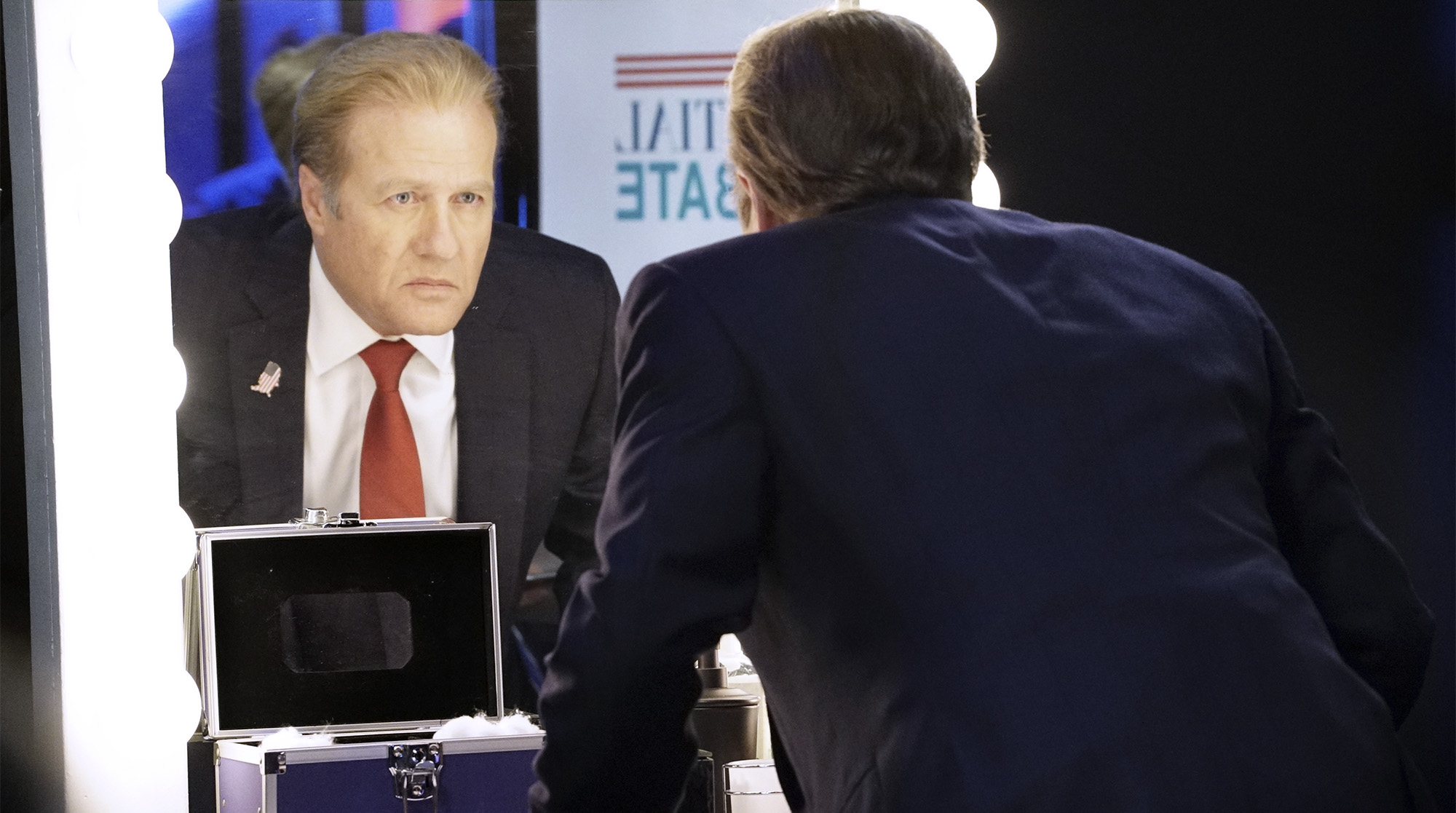 With 160 film and TV credits to his name, from "Guardians of the Galaxy" to "Gilmore Girls," Gregg Henry, '75, is one of the most prolific actors to come out of the UW School of Drama.

He's a brash billionaire fluent in locker-room talk. In 2016, he rankled both political parties by mutating into a pugnacious presidential candidate. And his name is not Donald Trump.

If you watch “Scandal,” which returns to ABC on Thursday night, you know who I’m talking about: Hollis Doyle, the oil tycoon who ran for the Republican nomination last season.

Doyle, played by UW alum Gregg Henry, became a stand-in for Trump during the election. The nod to our new president isn’t subtle: Henry’s character is bawdy and boastful, and an episode from last season was literally called “The Trump Card.” Showrunner Shonda Rhimes isn’t one to hold her tongue—or pen—when it comes to social issues, and Trump was an irresistible target.

Henry, ’75, isn’t shy about politics, either. Besides network TV, he spent the last year jabbing Trump on the president’s other favorite medium: Twitter. We talked with the prolific character actor about his time at UW and his career since.

You were born in Colorado. How did you make it out to Seattle?

In my last year of high school, I did a lot of speech things that garnered me some notice, and I got a scholarship to Drury College in Missouri. While I was there, I did about 14 plays in two years. I auditioned for various B.F.A. programs that existed at the time—there weren’t very many then, there are tons of them now. Seattle was the one I chose. UW is where I learned what the hell I was doing when I was standing up on the stage. It was where I really solidified what I wanted to do and learned a lot about my craft. Duncan Ross, who ran the B.F.A. program in the School of Drama, was a great influence on everyone who went there. Of all the teachers, he taught me the most and inspired me the most.

I still have a love of stage, but I was really drawn more to film and the movies. Of all the people who graduated in the class—there were 15 of us when we started, and I think we graduated 9—I was the one who came to Los Angeles.

Your first TV appearance was in 1976, a year after you graduated. So you went down to L.A. and started working right away?

Well, that’s the way it reads on paper (laughs). I did the usual sort of thing that an actor does. You got your pictures and you tried to deliver them to agents, dropping them in their mail slots. Meanwhile, I worked in a restaurant. Then I started a band with a guy I met at the restaurant. We did that for five months and went extremely broke. I was selling stuff over the phone for a while.

Then I auditioned for the Old Globe (Theatre) down in San Diego. I got one of the apprentice jobs there for a whopping 65 bucks a week. I went down there to carry spears (play minor parts), but I did pretty well and got a couple of roles. Somebody saw me when I went on as Orlando, the male lead in (Shakespeare’s) “As You Like It.” A casting director saw me there. On a Monday, my day off, I auditioned for (the TV series) “Rich Man, Poor Man – Book 2.” The following Monday, I was up in L.A. making $1,500 a week.

Why do you have an uncredited appearance in the movie “Scarface”? That stood out to me when I was reading your IMDB page.

Ah, the evil IMDB. After I had done “Rich Man, Poor Man – Book 2,” I starred in some films and some mini-series. An agent suggested there was a role in “Scarface.” Of course it was Al Pacino and (director) Brian de Palma, but it was only one line. I said, “One line? I’m not gonna go up for this part.” The agent said, “Well, it’s yours if you want it.”

So I went over to Universal and I met Marty Bregman, the producer. There was no director, there was no casting session. I walked into the office and Marty said he wanted me to read the line. The line was “How do you do, Mr. Montana?” I said it, and he said, “OK, you got the part.”

We decided I wouldn’t take credit for the part because, in essence, it was kind of a cameo. But that was the beginning of a relationship with De Palma that came around again and again. (Editor’s note: Henry did four more films directed by De Palma, most recently 2006’s “The Black Dahlia.”)

Let’s talk about “Scandal,” which returns to ABC tonight. You play Hollis Doyle, who’s been viewed as a parallel-universe Donald Trump.

The second season is when Hollis Doyle was introduced. He was the main money and financing behind (President Fitzgerald Grant’s) campaign, and he ultimately fixed the election for him. I was in almost all of Season 2. I came back once in Season 3. The storyline was that I was going to be picking a candidate to back financially, but Fitz’s character didn’t want me around, because of the dark past that we shared. Season 4 came, and nothing in that.

Then they called me up and said Hollis Doyle was coming back. But now they’ve put this whole spin of making him run for president, and thereby all the Trump comparisons began. Shonda (Rhimes) and the writers decided to parallel—and satirize, and comment on—the election. So they kind of bent Hollis a little bit and turned him into this Trump-like figure. As Hollis ran, his politics became very Trumpian. He’s a billionaire, and he probably had no love for the EPA or anything, but we had never heard anything like that. They made him into this during the election season.

As an actor, did you pay attention to Trump and the campaign more than you normally would have? Or did do your own thing and ignore that parallel world?

Unfortunately, that parallel world was in our faces every day. I would watch some of the things he did: how he related to the public, the style in which he was speaking to the audience at campaign spots and in debates. Hollis was always a large and very colorful character, but he was not so… blasting… in your face. He was a bit more reserved. He was contentious, and he would run things from behind the scenes, but he became more of an extrovert—more of a person who really loved the limelight and pushed the volume up about 25 notches.

You’re very interested in politics, in particular Democratic politics. Did you take some delight in skewering Trump on TV, in front of millions of people?

Well, yes. I always took delight in playing this part. I love this part. But in terms of having some political edge to it, that was fun. He became more buffoonish in order to satirize Trump. And yes, I enjoyed that.

Gregg Henry hasn't been back to Seattle in the 42 years since he graduated ("I missed grunge," he says). He'll return on May 5 for the Crypticon Convention at the Doubletree Hotel. As for Hollis Doyle, there's no telling if he'll be back on this season of "Scandal." Perhaps in a bout of wishful thinking, the show's writers made him lose in the primary.