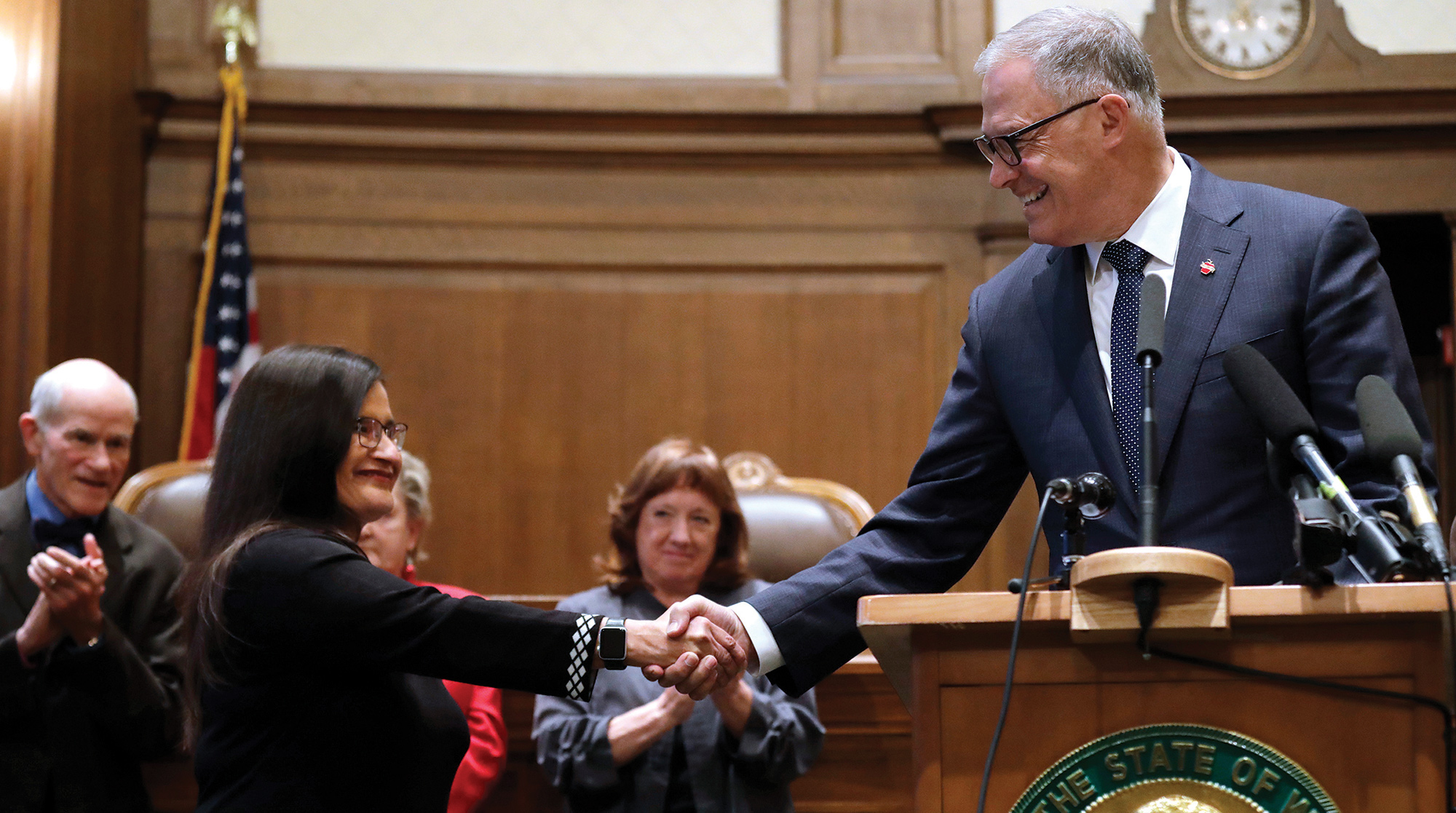 Photo from the Associated Press | Viewpoint Magazine | May 2020

In February, the Washington State Supreme Court convened at the UW to hear oral arguments on three cases. The visit was part of a traveling court project to bring hearings to sites around Washington, allowing more citizens to see the court in action. The event also brought the newest associate justice, Raquel Montoya-Lewis, ’95, ’96, back to campus.

Montoya-Lewis is the first Native American to join the Washington State Supreme Court, and the second to ever serve on any state’s supreme court. She is an enrolled member of the Pueblo of Isleta and a descendant of the Pueblo of Laguna tribes in New Mexico. She was appointed by Gov. Jay Inslee in December and now puts two UW degrees—a JD and a master’s of social work—to use on the bench.

Until last fall, Montoya-Lewis was judge for the Whatcom County Superior Court, a post she had held since 2014. Before that she worked in several tribal courts including the Northwest Intertribal Court System and was chief judge for the Lummi Nation, as well as the Nooksack and Upper Skagit Indian tribes.

“We could not be prouder to call you our alumna,” said Mario Barnes, dean of the law school, at a campus reception the evening before the Supreme Court heard oral arguments. “One of the things I’m most proud of is that you speak truth to power, including this school.”

Montoya-Lewis told the crowd she was grateful the visit allowed her to spend time with students. Earlier that day, she and other justices met with students of color at the Samuel E. Kelly Ethnic Cultural Center and heard from them about their own experiences at the UW. Law school for Montoya-Lewis “was a really difficult time. I will not pretend otherwise,” she said at the reception. “It’s a little discouraging to hear students tell stories almost identical to my stories from 20 years ago. It made me reflect today on the work that we have to do.”

It’s also important to consider institutional memory, she said. Some of the students’ concerns have been issues for decades, and it takes action on the part of the faculty and community to change them. It’s time to do something different, she said. “I really hope that I can be part of those conversations in support of the students.”

Montoya-Lewis replaces Judge Mary Fairhurst, who resigned from the court for health reasons. Her term ends in 2021, and Montoya-Lewis has already announced plans to run for the seat in the next election.

Beyond her work on the bench, Montoya-Lewis teaches classes on implicit bias to judges and other judicial employees. She has been recognized for her advocacy for children and youth, and for 12 years she taught as an associate professor at Western Washington University.