For educators, Elwha Dam removal is a teaching moment

A seventh grader spots the perfect specimen. It’s woody debris and it’s large—so large that it takes nearly 20 middle school­–size hands to haul the log from the bank of the lake to the edge of the Elwha Dam. They gleefully heft it over the fence and watch it plunge 108 feet into the whitewater.

The feeling of victory is palpable as the log, prevented from creating salmon habitat for possibly a century, floats away. One student records the incident on a pocket camcorder, then plays the footage for others.

Is this acceptable behavior?

Absolutely. And it’s the kind of scene that makes Kieran O’Mahony suspect he’s on the right track. O’Mahony, of the UW College of Education’s Learning in Informal and Formal Environments (LIFE) Center, provided the camcorder as part of his research into focusing teaching more on understanding than on just information alone.

“They’re doing the work that the river would have done had the dam not been in the way,” O’Mahony says, adding that the kids’ enthusiasm to share the video demonstrates a high level of engagement—a key ingredient to learning deeply.

The National Science Foundation awarded O’Mahony and UW Professor John Bransford a one-year RAPID (Rapid Response Research) grant. The pair is using the $200,000 to study teaching methods regarding the Elwha River and the upcoming removal of its two dams.

Half of the more than 300 participating middle-school students from nearby Port Angeles are doing traditional science projects with PowerPoint presentations. The other half will create five-minute videos that tell the story of the watershed’s past, present and future, including the swamping of local tribal land, the blocking of more than 70 miles of superb habitat from five salmon species, and the biggest dam-removal project in U.S. history. 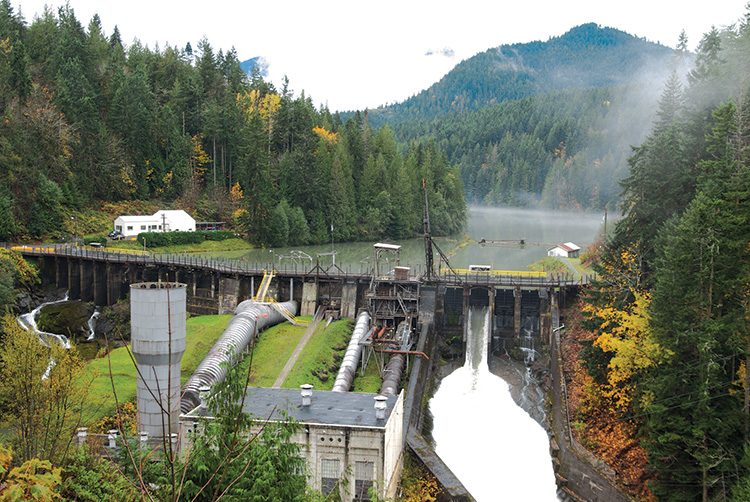 The Elwha Dam, which is the first major obstacle that adult salmon encounter on their upstream migration, has blocked access to more than 70 miles of prime habitat for nearly a century.

O’Mahony expects that the students who develop a video story with a beginning, middle and end will emerge with a deeper understanding of the science and the history of the area. However, both groups benefit from hands-on data collection, exposure to new career possibilities and mentorship from UW Honors students.

Upriver, at a spot between the two dams, girls turn over slick river rocks and use a paintbrush to gently nudge the “creepy-crawlies” into an ice-cube tray. With the help of Brian Westlund—of the Olympic Park Institute, whose assistance O’Mahony has enlisted—they identify and record their findings, connecting micro-invertebrates to the health of the ecosystem.

This lush, moss-covered valley is an excellent place to learn about local species and about why data collected now will help to understand the impacts of dam removal later. But the outdoor experience alone is not enough to convey the big picture, says O’Mahony; it needs to be mediated, or interpreted, by educators. O’Mahony hopes to discover how best to facilitate conceptual changes, those flashes of understanding when a misinformed or incomplete idea suddenly becomes clear and complete. One of the project’s goals is to get students to make observations, ask questions and not to worry about being right or wrong, O’Mahony says. “They learn how they like to learn, which is preparation for future learning.”

Later in the day, at the mouth of the river, a girl runs over to O’Mahony and shows him a photo she’s just taken of sparkling water droplets bouncing off a smooth rock. He smiles as she runs off.

“A child is not an empty brain to be filled,” he says, “but a fire to be kindled.”

The big unknown: the sediment effect

By 1913, the Elwha Dam had blocked salmon passage beyond the first five miles of the Olympic Peninsula’s Elwha River. This dam and another one, 13 miles from the mouth, are scheduled to start coming down next year—the biggest dam removal project ever in the United States. No one knows how the approximately 17 million cubic yards of sediment behind the dams will affect the area’s ecology once released. Gathering baseline data now will enable managers to judge the project’s success later.

Here is a sampling of the projects: