Nalini Nadkarni, ’83, has a forest for a manicure. It's a recent addition to an ongoing project, she says, making connections between scientists and the world beyond museums and classrooms.

The forest ecologist’s face is active, her voice lively, and her manicure is trees.

“I haven’t always been given to getting manicures—it’s a new thing,” explains Nalini Nadkarni, ’83. Known as a pioneer in studying plants called epiphytes in the Costa Rican rainforest canopy, Nadkarni has been more likely to use her hands to clamber on ropes to the tops of (intimidatingly named) strangler fig trees, which can reach a height of 150 feet—equivalent to many redwood trees. Up there, Nadkarni reaches an area she called in a 2009 TED talk “more like an open field, with light, in comparison to the dark, still rainforest floor.” In that field-like environment, she is most interested in those epiphytes—”epi” meaning upon, “phyte” meaning plant—which grow nonparasitically on other plants. 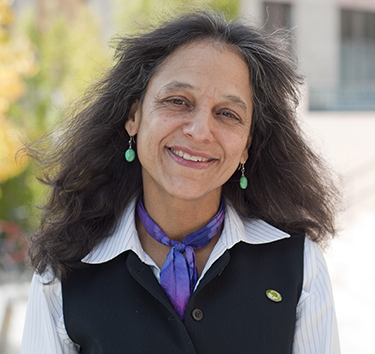 Nadkarni knows epiphytes and the canopy well, having studied them since she started graduate studies at UW in 1979. Her manicures are a recent addition to an ongoing project, she says, making connections between scientists and the world beyond museums and classrooms. “These trees on my nails connect me to a demographic that I might not normally meet—they notice my nails, then I can notice their nails and have a conversation,” she says.

In the biology laboratory Nadkarni leads at the University of Utah, signs of that project adorn hangers: A delicate silk scarf splashed with autumnal aspen leaves; a sheath skirt printed with diatoms, the single-celled algae in lakes that receive light and turn it into energy, feeding the food web in most of Earth’s water sources. Along with a vivid green leaf-patterned blazer Nadkarni wore for a recent live taping of NPR’s Science Friday in Salt Lake City, each bears a visible hang-tag identifying its scientific subject. The blazer’s foliage belongs to a canopy rainforest plant called Piper auretum—in the same genus as everyday black pepper used on scrambled eggs (Piper nigrum), Nadkarni notes. 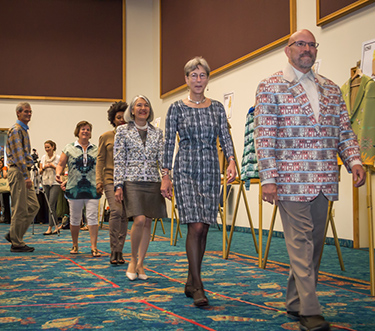 Nadkarni organized a fashion show of ecologists at the University of Utah in 2016.

The diatom skirt and other designs have seen a wider stage than Nadkarni’s lab. They were included in a 2016 fashion show of ecologists Nadkarni organized at the University of Utah, including current and former Ecological Society of America officials and fellows, as well as National Science Foundation program officers. University of Utah Theatre Department designer Brenda Van der Wiel interviewed ecologists about their research, then conjured up conversation-starting outfits related to that work.

In that world beyond museums and classrooms, Nadkarni has also worked for years in prisons. She began there in 2003 with a goal of restoring slow-growing mosses stolen by the floral industry from Pacific Northwest trees, by determining which were faster growing and better suited to propagation. Incarcerated men at Washington’s Cedar Creek Correctional Center helped her determine that in horticultural studies at the prison, which is located half an hour from Evergreen State University, where she taught 1991–2011. 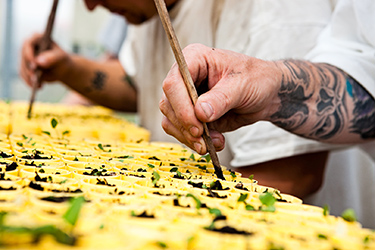 These days, she and others in her lab lecture and work with prisoners at a nearby Utah prison, the Salt Lake County Metro Jail, and five juvenile detention centers in the state. In one ongoing project, Nadkarni and inmates helped convince the jail to build a refuge pond for least chub, a small, ray-finned fish found only in Utah. Encouraged by that start, the jail now offers learning opportunities to prisoners in landscaping and goat ranching. “Is this a jail or a training facility to help people re-enter society? It’s both,” says Nadkarni. Her work recently extended to bringing nature videos and sounds into Florida prisons’ solitary-confinement areas, after finding in a previous study a 26 percent reduction in violent infractions by inmates who watched nature videos compared to those who did not.

One former inmate later earned a Ph.D. and did a postdoc at the University of Nevada, inspired by the horticultural work he encountered with Nadkarni’s team. More than that, Nadkarni said on “Science Friday,” she thinks scientists themselves experience the greatest impact when they go into the prisons to interact with inmates “to hear their good questions and to recognize … that spark of science, that feeling of curiosity, that desire to penetrate a new frontier is present in those men and women and youth, just as it is in people who aren’t incarcerated.”

That’s what can happen, in that world beyond museums and classrooms.

Catherine Arnold is a writer in Salt Lake City.