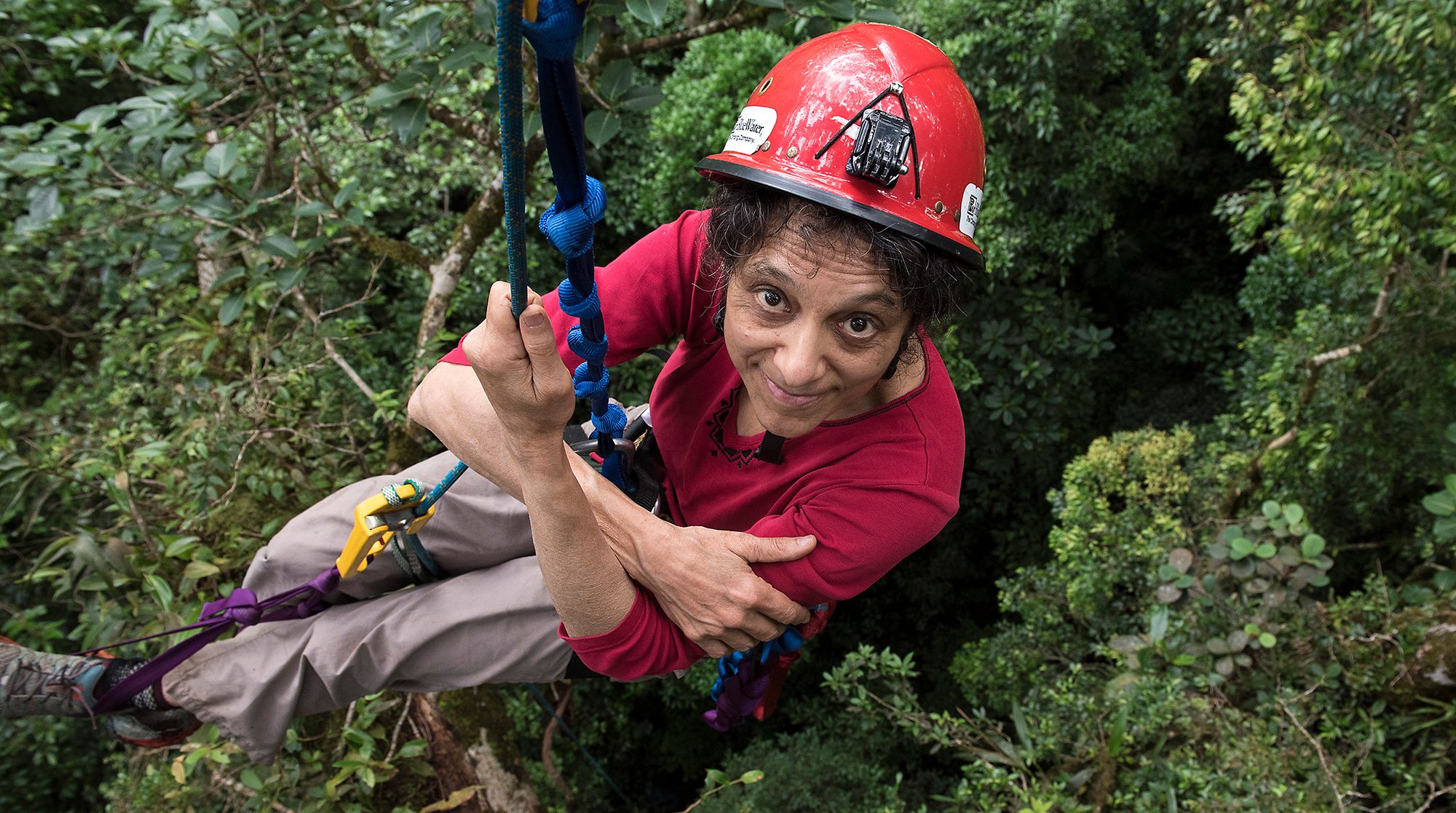 Nalini Nadkarni, ’83, might well be the opposite of Barbie. While the latter is traditionally tall, blond and known for pink dresses, the former is petite, brunette and often sporting a helmet and climbing gear, tools she uses to carry out her work as an ecologist.

But last year, Nadkarni joined a project between National Geographic and Mattel to create a new line of Barbie dolls centered around science and exploration. This was a partnership long in the making.

The Barbie connection started 15 years ago when Nadkarni was on the faculty at The Evergreen State College. The scientist wondered how she could share her love for ecology with people beyond her students and colleagues. 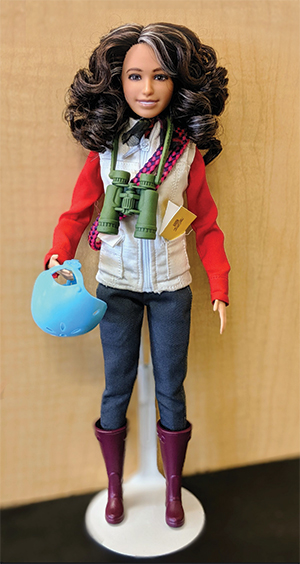 To thank Nalini Nadkarni for her help designing the Explorer Barbies line, Mattel crafted a special doll that looks like the UW-trained ecologist, complete with climbing helmet, ropes and binoculars.

“I had a 6-year-old girl at the time,” she says. “I thought, what if we took Barbie and then dressed her in my field clothes, giving her a little helmet and a little crossbow.” (The crossbow is used to shoot climbing ropes up into the trees.) “Then Barbie could do ecology instead of going to the prom,” says Nadkarni. She called Mattel with the idea, and was summarily dismissed.

But the forest ecologist could see the benefit of creating such a doll to teach children about the natural world, especially those children whose families or schools might not take them to a zoo or museum. “So we started making them ourselves,” she says. “It was me and the students in my lab. We bought Barbies at garage sales and made clothes and gear for them.”

She took samples of her dolls to conferences to share with her peers and deliver the message that they all could do more to engage the public. In 2003, The New York Times wrote about Nadkarni’s efforts to bring science to a wider audience, including her “Treetop Barbie.” When Mattel caught wind of this, the company asked Nadkarni not to sell the modified dolls. She instead agreed to keep the enterprise small.

Growing up in Bethesda, Maryland, Nadkarni had a big yard filled with trees that she loved to climb. “I always thought, I’m going to grow up and protect trees somehow,” she says. In a college biology class, she learned about ecology, and knew she wanted to do that type of work, especially with trees.

In 1979, Nadkarni enrolled at the College of Forest Resources to earn her Ph.D. There were only a handful of women on faculty, and very few graduate students. Nonetheless, she found a few great role models. Forestry professor Linda Brubaker showed her how to be a scientist, have a family, and take time to care about those around her. “She was really respected for her scholarly work,” says Nadkarni.

In her first summer of graduate school, Nadkarni took a course at a field station in Monte Verde, Costa Rica. “It’s a cloud forest, so there are plants like bromeliads that dwell in the canopy, along with monkeys and birds,” she says. She was enchanted with what she discovered and was eager to know more about what was going on 200 feet above the ground.

As a young scientist, you are encouraged to find new areas for discovery, she says. So she tracked down a researcher who was using mountain-climbing equipment to get up into the canopy. She spent a month with him learning his tree-climbing technique.

“That’s what dolls are about, seeing yourself in a different identity.”

When she came back wanting to focus her studies on forest canopies, her doctoral advisory committee was skeptical of the direction; one professor said it was Tarzan-and-Jane stuff and that she should stick to studying the forest floor. “But I did get a grant and was able to do my own canopy research,” Nadkarni says. “I wanted to know what are these canopy plants that are so abundant, what are they doing and how do they play a role in the ecosystem?” The more she learned, the more questions she had. “Soon I was spearheading one of the major canopy efforts in the world.”

She has developed her career on two major research sites—the Olympic Rainforest and Costa Rica, where she performed field research for several weeks this winter. “We have found so many questions for the next generation of people studying not just canopies, but forestry as a whole.”

Since first crafting the Treetop Barbie, Nadkarni has become a Guggenheim fellow, expanded her public engagement work, including programs with prisoners, and joined the faculty of the University of Utah.

Then, out of the blue last year, she received a call from National Geographic. The organization was partnering with Mattel to create a line of dolls centered around science, exploration and conservation. They wanted her to be an adviser on the project. “Of course I said yes,” says Nadkarni. “For me it wasn’t so much about my idea or about a corporation sticking its neck out. To me, it’s that society has changed. Enough children were saying to their dad or mom or aunt that they would like that kind of Barbie.”

The line includes a wildlife conservationist, an astrophysicist, a polar marine biologist and a wildlife photojournalist. The dolls all come with playsets. The entomologist, for example, has a lab bench, a tree with insects, a net, binoculars and a microscope.

“That’s what dolls are about, seeing yourself in a different identity,” says Nadkarni. “It’s so important; it allows children to play around and explore.”