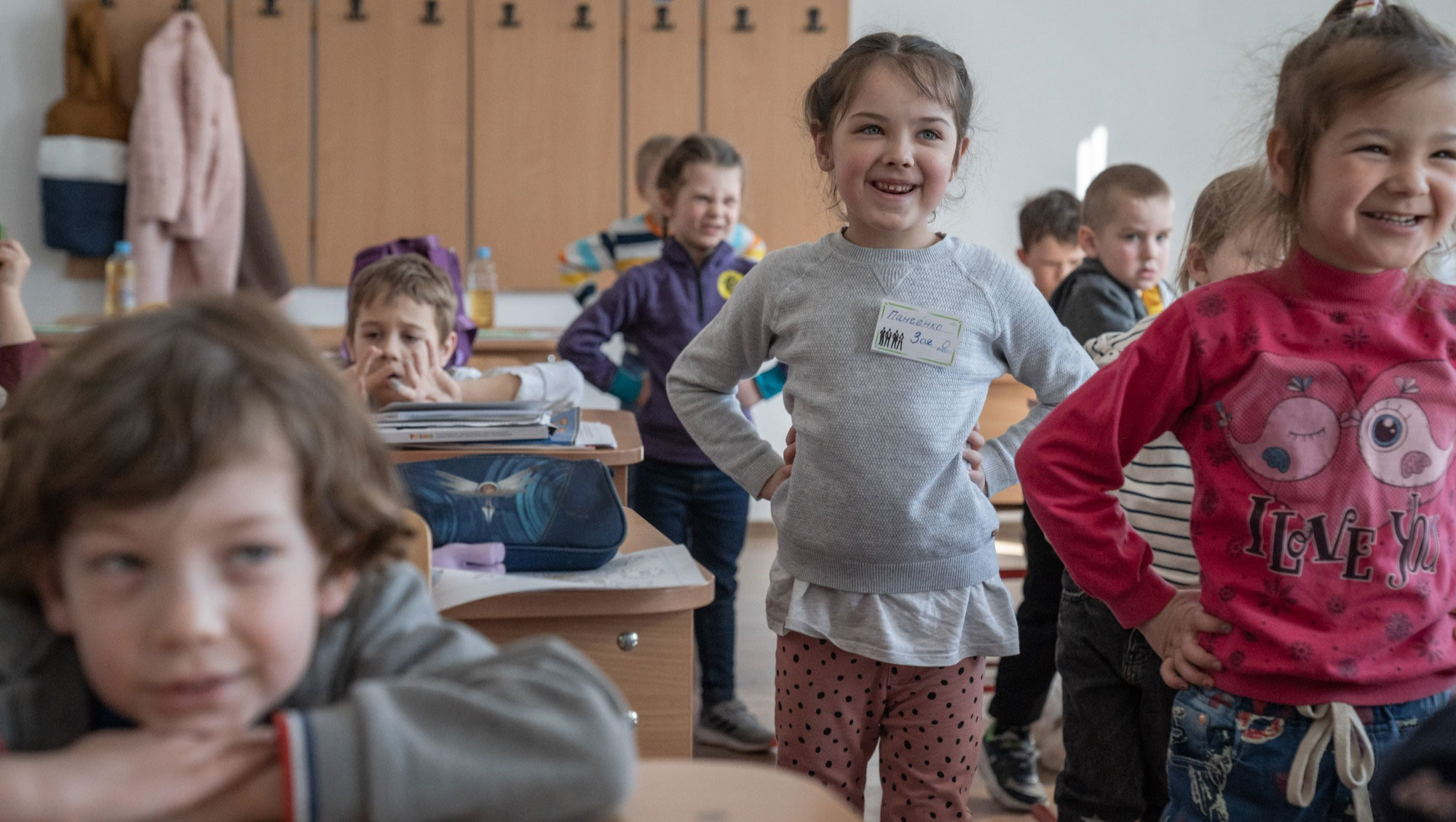 In March, not long after the first Russian airstrikes on Odesa, Anastasiia Konovalova fled her home in Ukraine with her toddler, Kyril. The teacher had to leave behind her husband and parents, but she brought math books and a desire to continue teaching Ukrainian children.

A few weeks ago, the former UW exchange student called from a playground in Bucharest, Romania, to talk about her move and her efforts to establish a school for refugee children in their new—hopefully temporary—city. Before the war, Konovalova was head teacher at Ostrovok Primary School. Right away in the new country, she thought about how to offer Ukrainian children some normalcy and a place to learn and socialize with other children. She credits her experience at the UW, where she was an exchange student in 2011 and 2012, as the source of energy and imagination that led her to create a free primary school.

She and a few other teachers started providing classes in a refugee center, but demand for the school grew quickly and they needed more dedicated resources. They reached out to the Romanian government. A nearby high school offered eight classrooms. It wasn’t an ideal situation—after the high school adjourned for the day, the Ukrainian teachers and 277 students moved in from 3 to 6 p.m.—but it was something. 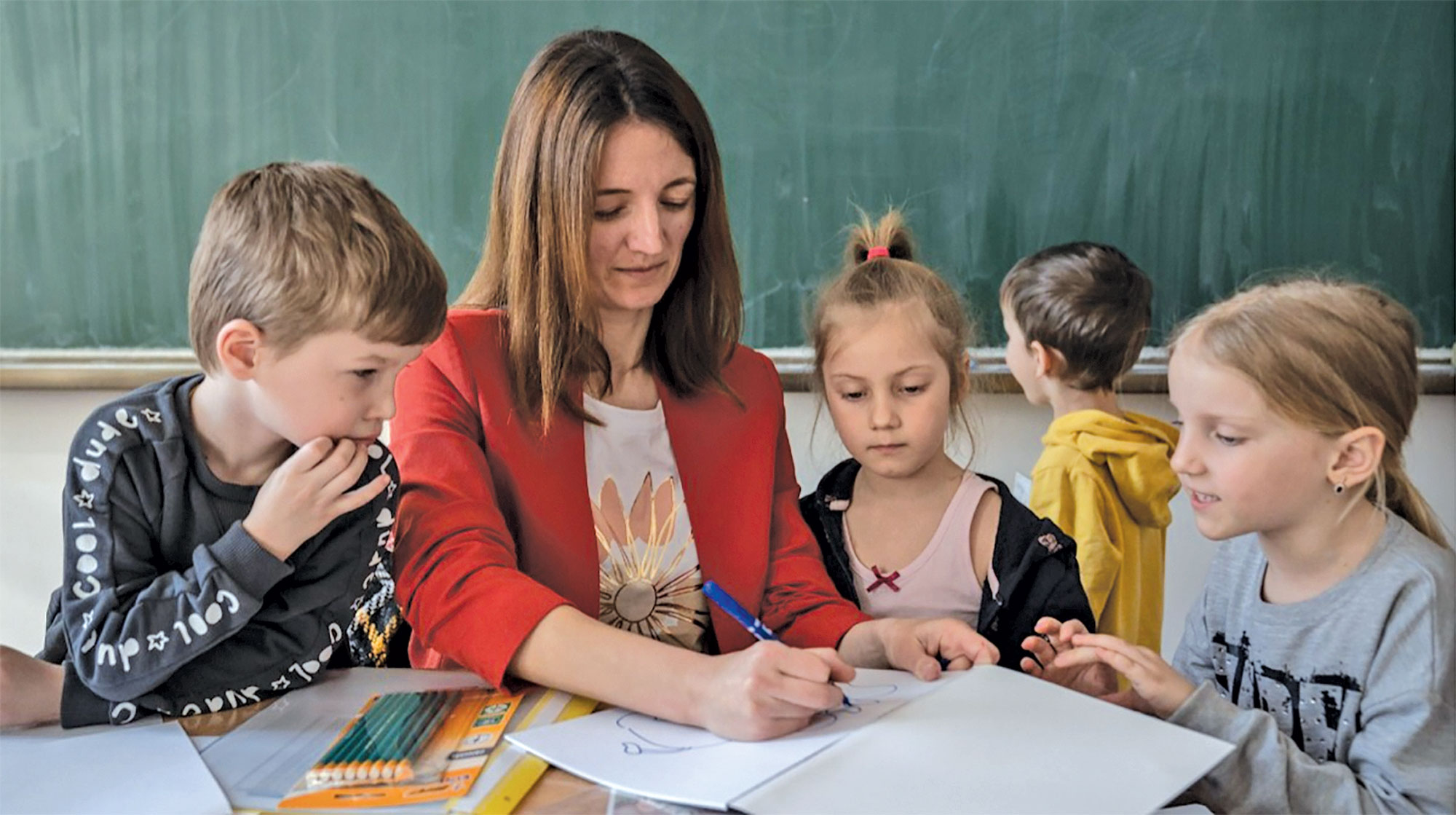 Anastasiia Konovalova teaches English to a group of schoolchildren.

Thousands of families from Odesa and other parts of Ukraine fled to Romania for the safety of their children. According to UNICEF, more than 1.1 million Ukrainians have fled through Romania. More than 80,000 have stayed in that country, most of them women and children.

At first, everything in the school was borrowed or came from donations. But then the Romanian government and UNICEF delivered more resources, including giving each child a blue UNICEF backpack filled with notebooks, colored pencils and paints. The organization also provided every class with supplies and materials for three months of instruction.

In May, the first lady, Jill Biden, visited the school and heard the stories of the mothers, children and teachers. The news of that visit—which was shared around the globe—prompted further support from private gifts to complement the resources from non-governmental organizations and the Romanian government. On the day of her phone call, a UW alum had sent $100 for sports equipment.

“We basically haven’t stopped working since we arrived in March,” Konovalova says. “Right now, we are running a summer camp for our children.” She is quick to express her gratitude to the Romanian people and their government. She also credits her UW community, particularly her friends from college who used their social networks to spread the word about the school and its needs.

Konovalova describes her time as a UW exchange student as the best year of her life. “I had a scholarship and I lived on campus and I met all these wonderful people,” she says. That experience comes into play now. “I don’t know if I would be able to do what I’m doing now without the UW. I learned there didn’t have to be boundaries, so much was possible.”

Now, she and her fellow teachers serve 350 kids in two locations. The new school year starts up in September, and they will continue to offer classes in the late afternoon. “We’re encouraging our children to join Romanian schools and come to us after,” she says. Now that it’s clear their stays will be longer than a month or two, “we need a medium-term plan,” Konovalova says.

“We have people who have nowhere to go back to.” Others are physically in Romania, but mentally back in Ukraine. “They’re always thinking, maybe tomorrow we’ll go home.”