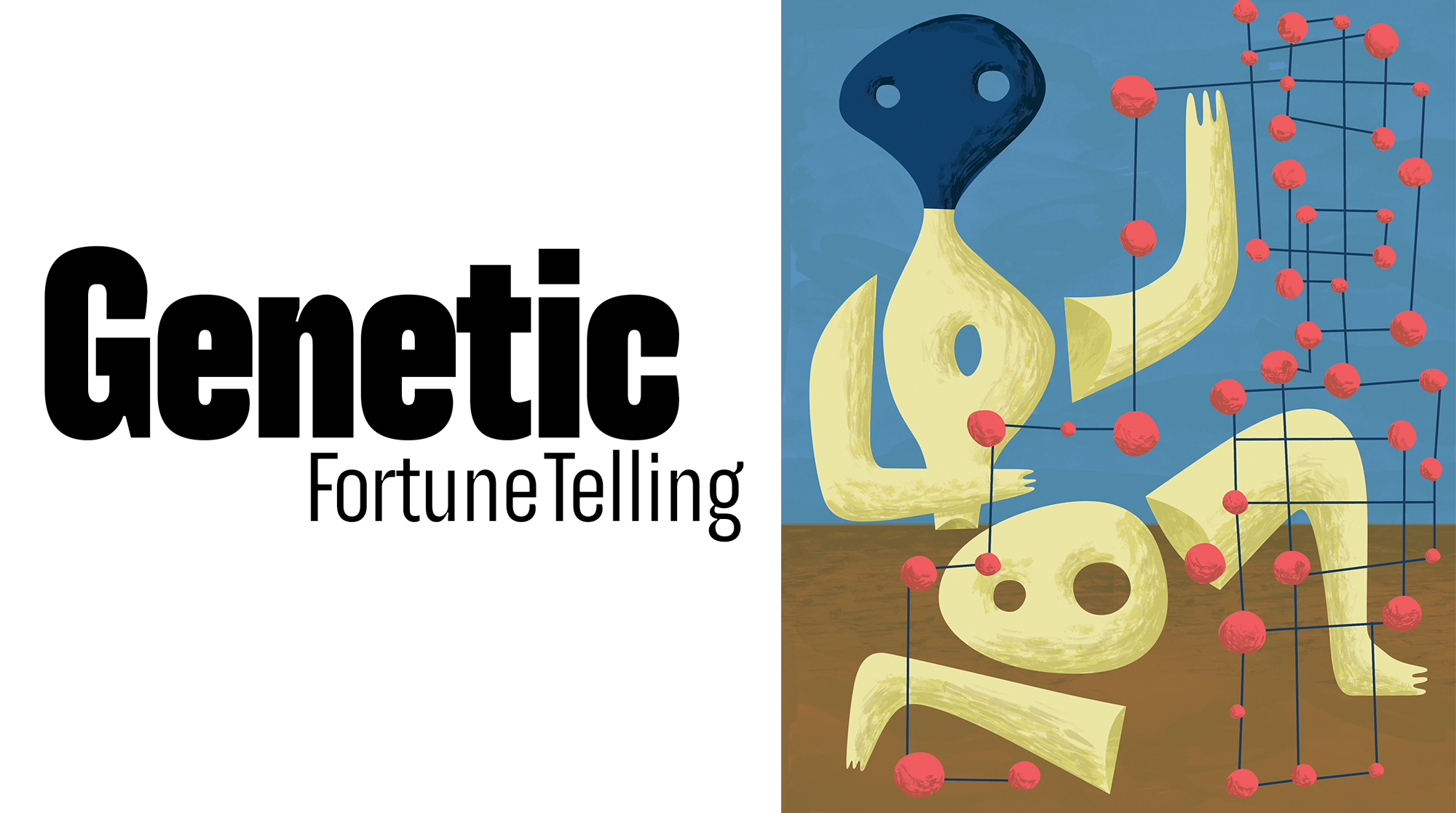 Can a consumer DNA kit reveal your future?

Thanks to services such as 23andMe, genetics has gone mainstream. In this two-part report, staff writer Julie Garner shares her experience with 23andMe, and UW Medicine clinical geneticist Marshall Horwitz discusses his genetic, degenerative eye condition.

On a cold, windy day last spring, I sat at my desk spitting into a test tube. I paid 23andMe $200 to find out what deep secrets my genes would reveal. Hence, the test tube that was part of the kit I was sent.

My plan was to take the results to a UW ethics specialist to discuss whether it was ethical to send important health information based on genes directly to consumers. Actually, I wanted to know if heart disease or cancer were in my future. Then I wanted an ethicist to weigh in on whether it was ethical for a computer-generated report to forecast my health future.

What did I discover? That my genes make me likely to be a light sleeper, unlikely to be an elite power athlete and that I can detect the distinct odor of asparagus from urine. Wow. I’ve had trouble sleeping all my adult life and I can’t run a mile without wanting to call an aid car. But recently, I realized that I could download the raw DNA data from 23andMe, and, for $5, send it to a company called Promethease and get a report which seemed to promise a more comprehensive look at my genes. I couldn’t make sense of that report.

So, I called Peter Byers, who has been a geneticist at the UW for 44 years. He is the No. 1 expert in the world on a rare condition called Ehlers-Danlos syndrome, which covers a range of connective tissue disorders. If someone could help me decipher the report, it was he.

Byers is an avuncular fellow who took me by my unscientific hand and led me to a conclusion: 23andMe captures only a fraction of the scads of genetic variants that may (or may not) cause disease. If you’re only testing a handful of variants, you won’t have enough information to infer much about your genetic potential for disease. It would be like finding an apple with a worm and declaring the orchard diseased.

“Here at the UW,” Byers explained, “our people sequence the entire genome.” He went on to say that the 23andMe results are recreationally interesting but not “medically actionable.”

If you need medically actionable information about your genes, the UW is the place to go. UW geneticists can assess genetic risk for inherited aneurysms, prostate cancer, breast cancer, vascular diseases, inherited movement disorders and scores of other problems where genetics come into play. People who have reason to suspect that a disease runs in the family may be candidates for genetic testing and counseling.

Without the groundbreaking discoveries of UW geneticist Mary-Claire King, it wouldn’t be possible to test for the BRCA1 and BRCA2 genes, both inheritable causes of breast cancer. In June 2013, the U.S. Supreme Court ruled that human genes cannot be patented in the U.S. because an act of nature can’t be patented; it would be like seeking a patent for blue eyes. Within hours of the high court’s decision, UW was the first lab in the nation to make available testing for these genes. The testing gave women the ability to make decisions about whether to undergo mastectomy, like Angelina Jolie has done.

Genetic knowledge is leading to targeted treatment, especially for tumors that may respond better to some drugs than others. Colin Pritchard, co-director of the Genetics and Solid Tumors Laboratory, is among the UW Medicine researchers working to develop targeted treatment of prostate cancer based on a man’s genes.

“The excitement of precision medicine includes immunotherapies that are becoming available and that are effective in treating prostate cancer,” says Pritchard. For example, there is one particular DNA defect found in between five and eight percent of metastatic prostate cancer patients. Immunotherapy has been successful in patients with this defect. Researchers are also working to combine therapies that may control cancer, making it more of a chronic disease.

Wylie Burke, a UW professor whose work focuses on the ethical and policy implications of genetic information in research, public health and clinical care, chuckles a bit over 23andMe. “It’s never been illegal for people to waste money,” she says. “After all, people go to fortune tellers, don’t they?”

How 23andMe helped me look into my own eyes

When I was a medical student at the UW in the early 1980s, we would practice performing physical exams on classmates under the supervision of a specialist for the particular organ system we were studying.

One afternoon, we dilated our pupils and took turns looking in the back of each other’s eyes. My classmate, an excellent student who turned out to be a very good doctor, thought he saw something unusual on my retina. So he called over the ophthalmologist who was instructing us. I will never forget when the ophthalmologist looked into my eyes and said, “Whoa, that shouldn’t be there. You’re too young.” He described the findings using medical jargon but I was too embarrassed to ask for an explanation because I had not completed the assigned reading. I was worried that he was describing something I should have been familiar with.

By the time class ended, it was dark and rainy, my pupils were still dilated, and everything looked blurry. I was so preoccupied by what might be lurking in the back of my eyes—and in the years in front of me—that I didn’t realize I had boarded the wrong bus until it had already taken me a good distance in the opposite direction from home.

(I may not have learned how to properly perform a fundoscopic exam that day, but I did learn a thing or two about doctor-patient relationships. I also came to appreciate the importance of never being afraid to reveal my ignorance.)

Years later, but still at an age younger than is typical, I would learn that I had “drusen,” speckles on the retina associated with age-related macular degeneration, the most common cause of blindness in the western world.

How did that happen? My parents’ vision was fine. My grandparents all lived to an advanced age and didn’t have macular degeneration, as far as I knew.

Many years still later, when I was well into my career as a practicing physician, I decided to be tested by 23andMe to see what I could learn. Being of Ashkenazi Jewish ancestry, where the founding population is small, I learned of thousands of people to whom I’m related, some famous, some infamous, but mostly strangers who are my kin.

I decided to sign up for this test before the FDA restricted 23andMe’s reporting of health-related information due to serious concerns if test results are not adequately understood by patients. Among the results I received was a prediction of my significant risk for developing macular degeneration, using scientifically sound and well-validated genome-wide association studies. The results estimated that I had a nearly 60 percent chance of developing the vision affliction compared to just 7 percent in the general population.

It turns out that I possess two copies (that means I am “homozygous”) for each of several top high-risk common genetic variants and that my genetic risk for macular degeneration is just about as strong as it could possibly be. Amazingly, my older brother, son of a gun, who was also tested through 23andMe (and now I have proof that we are indeed siblings), has a risk of less than 3 percent, well below that of the general population. Evidently, our parents, who are sadly no longer with us but whose vision held out for as long as was needed, must have been heterozygotes for the high- and low-risk variants of each associated gene. That explains why my brother was lucky and I was not.

Now that I teach genetics to first-year medical students, I use my own results from 23andMe, in particular those for macular degeneration, as a case study illustrating inheritance of common multifactorial diseases.

Many of the genes implicated in risk for macular degeneration are members of the vascular endothelial growth factor pathway. One of the most effective therapies (really, the only therapy) for macular degeneration is, in fact, eyeball injection periodically with drugs that inhibit this growth factor. Interestingly, this therapy was introduced to practice  based on a hunch more than anything else—that happened years before genome-wide association studies confirmed its importance. Yet, it works, and now we know why.

These studies have identified genes in other pathways that just as strongly contribute to pathogenesis of macular degeneration. These include “complement” components of the immune system, suggesting novel, rational approaches involving new drugs that instill me with confidence that, should I ever need it, medicine will have plenty to offer.

Marshall Horwitz enjoyed damaging his eyes growing up under the California sun before arriving in Seattle 35 years ago to earn M.D. and Ph.D. degrees in the UW Medical Scientist Training Program, which he now directs. He learned to embrace gray skies and continued his training at the UW, Fred Hutch, and Seattle Children’s in internal medicine and medical genetics. His South Lake Union laboratory researches the hereditary basis of cancers of the blood, among other topics. He recently helped to launch a new clinic at the Seattle Cancer Care Alliance focusing on patients with a family history of blood cancers.