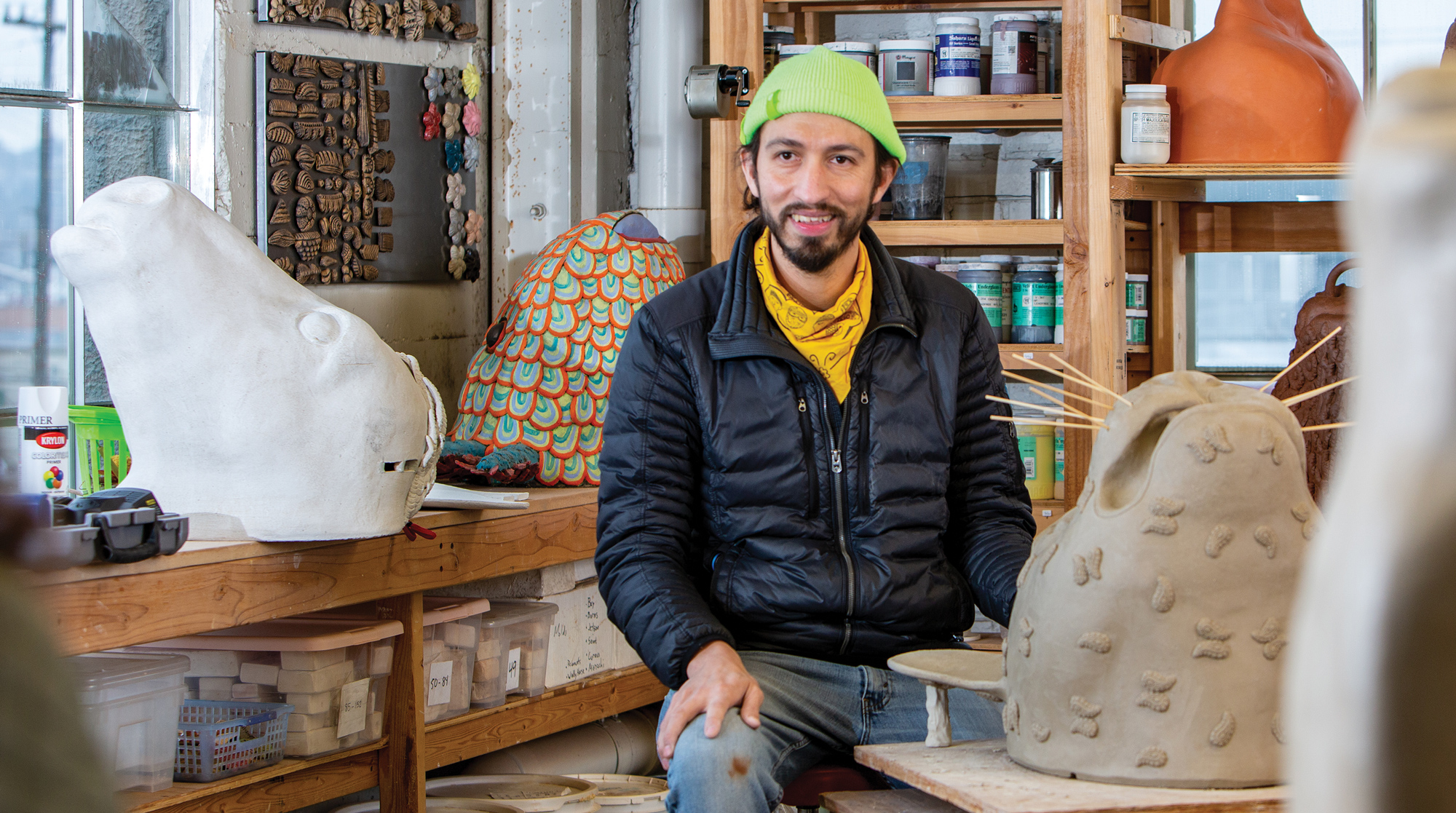 George Rodriguez, ’09, tells stories of identity and humanity through his art.

Clay can be difficult. It dries out. It cracks. It changes color. It can’t be rushed. It responds differently to glazes, firing temperatures and a whole suite of variables. Also, it’s messy and can explode in a kiln.

But that’s part of why George Rodriguez fell for clay. He was studying graphic design as an undergraduate in El Paso, Texas, and thought that ceramics was just about pottery. But he took a class anyway and discovered that clay—with all of its possibilities and uncertainties—could become sculpture. Then and there, he chose to make art his career.

In 2006, he enrolled in the UW’s MFA program where Akio Takamori, one of his heroes, was teaching. Rodriguez wanted to study with somebody working in figurative sculptures, and that was Takamori’s metier. “And the UW had one of the top programs in the country for clay,” says Rodriguez, ’09. When the budding artist came to scout the school, Takamori introduced him to the clay community. Rodriguez was dazzled. “It was like your hero taking you to see the town,” he says. He discovered professors and artists like Doug Jeck, Jamie Walker and alumni like Patti Warashina, ’62, ’64, the Seattle artist who built her career around sculpting the human figure. He couldn’t wait to move. “This was the community I wanted to be in.”

During a recent visit, Rodriguez, in jeans double-cuffed to reveal his colorful socks, is working in his two-story corner studio in an old warehouse in Ballard. Just inside the door, a larger-than-life clown he calls “Candypants” awaits visitors. To the left looms a massive kiln large enough for Rodriguez to walk inside. It makes it possible for him to create people-sized figures, he explains as he pulls open the heavy door and throws his whole body into sliding it down a track. Creating complex, and massive and often intricate sculptures has its challenges, particularly with clay, which offers an uncertain outcome. “It’s always exciting to open a kiln,” says Rodriguez. “You’re wondering, does it work today? If not, you take a hammer to it and start over.”

From the start, Rodriguez explored identity, culture and community with his work. His pieces are clever, playful and profound. Part of his style centers on ornamentation and detail. He hand forms tiny leaves and rosettes and elements to adorn the larger figures he’s creating. His UW thesis exhibition, “Instrumental Divide,” featured nine life-sized mariachi figures and was built around the theme of community. At first view, you see the unadorned backs of nine figures shoulder to shoulder. But if you move around it, you realize it’s a band with instruments. From the front, you’re standing on a tiled plaza with nine mariachi players in elaborate dress. 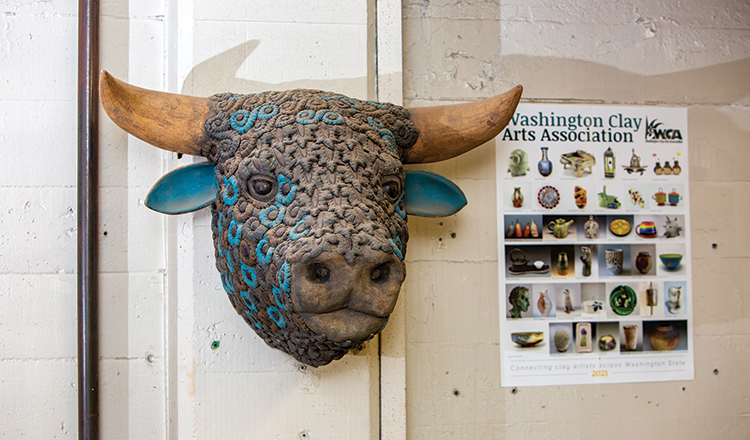 One of Rodriguez’s clay sculptures.

In 2009, he received a Bonderman Travel Fellowship that allowed him to spend the following year traveling the world. He visited 26 countries over 10 ½ months. He found inspiration in Japan’s cherry blossoms, Thailand’s elaborate monsters, Peru’s pre-Columbian pottery and China’s Terracotta Army. It was a necessary adventure for Rodriguez who often reflects about his own identities—Mexican and American. “It made me realize how interconnected we are as human beings,” he says. When he returned home, he found himself trying to merge western and eastern styles in his work. “So much imagery bridges cultures without even trying.” He took inspiration from communities besides his own, ones he wants to celebrate through his own lens.

Rodriguez’s first solo show was a series of self-portraits. One of his next projects evolved away from himself as a subject into a series of people connected by the named George: George Jetson, George Burns, Curious George, Boy George, George Plimpton. Rodriguez’s work is playful but also thoughtful. He created “Narcissus,” a dress covered with yellow flowers, in response to people saying his self-portraits were narcissistic. Those who look inside the dress see themselves in a mirror.

Today, Rodriguez is represented by the Foster White Gallery and his work can be found at two sites on the UW campus. A version of his 12-piece series based on the Chinese zodiac hangs in the Bill & Melinda Gates Center for Computer Science and Engineering. Rodriguez features the 12 animals, but his version uses creatures of Central and South America in place of the Chinese animals traditionally featured.

While Rodriguez is popular among collectors in the Pacific Northwest, his reputation is now spreading across the country. In 2019, the National Council on the Education of Ceramic Arts recognized him as an emerging artist. And he is currently an artist in residence at Temple University in Philadelphia.

His latest project is a continuation of his animal series, “El Zodaico Familiar.” This version is a collaborative effort, with Rodriguez’s sculptures embellished by Mexican and Chicanx/Chicane artists—including a jeweler and a poet—whose birth years correspond with the masks they’re helping create. The exhibit opens June 19 and will run through late October at the Whatcom Museum.