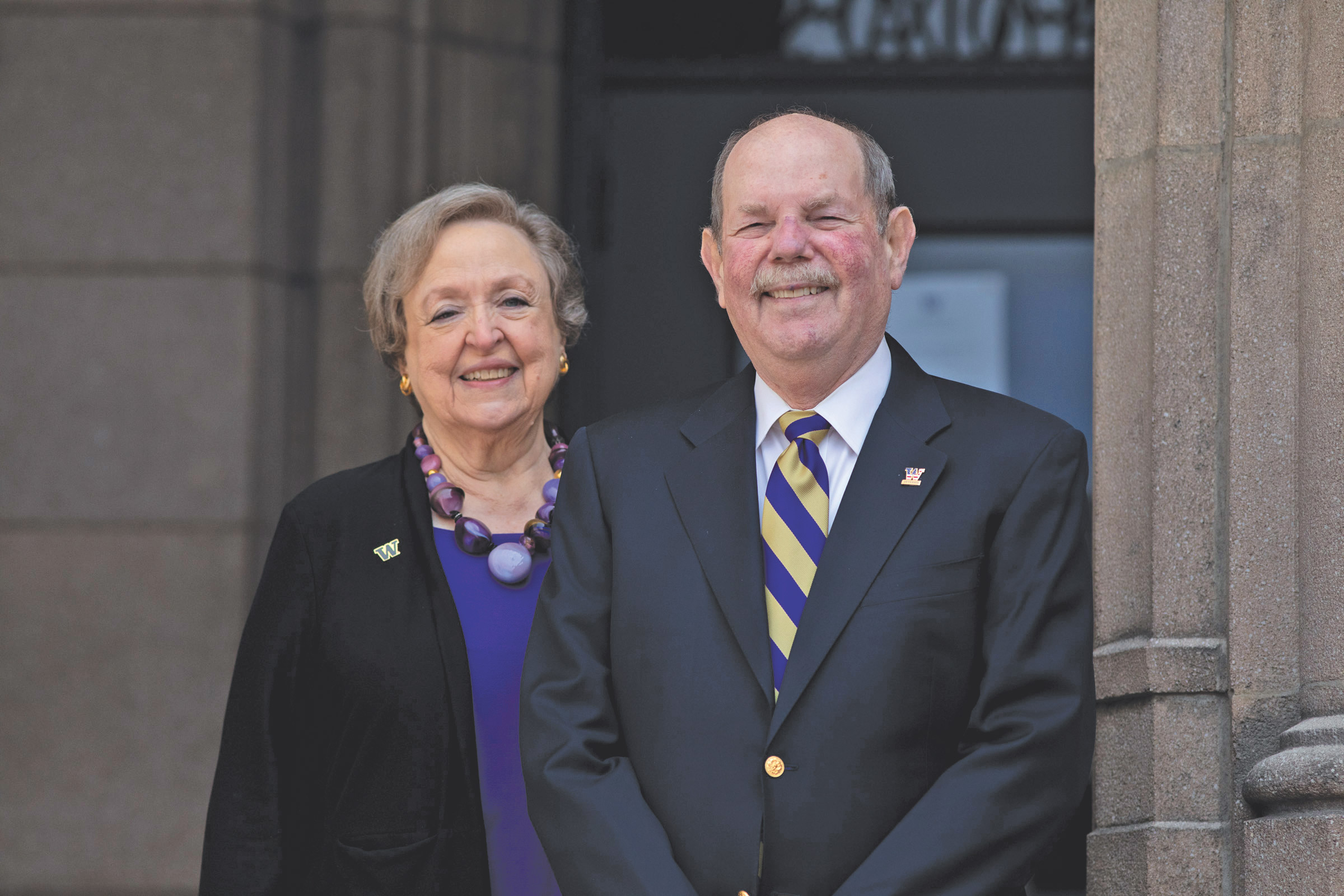 Created in 2016, the UW Alumni Association’s Golden Graduate Distinguished Alumnus Award is given to an alumnus who has demonstrated sustained, long-term and meaningful engagement with the UW.

“We adopted the University.”

Nearly any time the UW Alumni Association Board of Trustees, Meany Center, the UW Libraries, or the iSchool have something important in the works, there’s a good chance you’ll run into David, ’68, and Marcie, ’69, ’76, Stone. Simply put, they are two of the most dedicated, passionate volunteers the UWAA and the University have.

Dave, a southwest Idaho native who holds a UW bachelor’s degree in business administration, is retired after spending 30-plus years in the telecommunications and information sector. During his career, he served in the Army for 20 years, including service in Vietnam. Marcie, who’s from Seattle, holds a bachelor’s degree in English, a teaching certificate and a master of librarianship from the UW. She spent most of her career as a librarian who helped bring the federal government into the digital age. After earning their UW degrees, the Stones left Seattle and lived all over the U.S. and abroad because of Dave’s military assignments. They always felt connected to the UW. But since returning to the Emerald City in 2008, their love for the University has grown deeper.

“The University has been a hub for our lives since we’ve been back,” Marcie says. “What we studied here was so important to our careers. We really wanted to give back. We have more time than money, so we asked the University and the alumni association to put us to work.”

That they did. And it was not a big ask given how strong their connections to the UW run. Marcie’s parents were longtime supporters of the Meany World Series, and music always meant a lot to the Stones. So, they made a generous gift to Meany, endowing a “music in schools” program. They also designated testamentary gifts to both Meany and the Information School.

Dave, who enrolled in the Army ROTC program while a UW student and was commissioned upon graduation, has been very active in veterans’ initiatives on campus. No wonder. During his military career, he worked in Army staff communications support, as a company commander in Vietnam, and in the Office of the Army Inspector General, making recommendations to the Army Chief of Staff on better ways to conduct its business.

His involvement was a key as the Office of Student Veteran Life and the UW Alumni Association built out Veterans Appreciation Week and created the Distinguished Alumni Veteran Award. Dave used his information sector experience to support the UW Libraries, served as President of the Friends of the UW Libraries Board and worked to highlight the support the Libraries provide to UW students, faculty, researchers, and national and international communities.

Meanwhile, Marcie, who earned her graduate degree in librarianship in 1976, worked with other federal librarians and information specialists at the inception of digital government, as the federal government embraced technology to create public-facing websites. “Although the technology applications have matured vastly, we established some of the earliest implementations and the initial policies,” she says proudly.

Marcie got involved with the iSchool when she realized that its graduates possessed the combination of skills that would enable them to realize the potential of the then-new digital technologies. She went on to increase her ties, serving on the MLIS Advisory Board, and co-chairing the school’s very successful “Be Boundless” campaign. Marcie has also built on her ties with the Honors Program, of when she is an alumna, through a mentoring project and other activities.

Both Dave and Marcie supported the Dream Project, through its scholarship activities. And, to their great pleasure, they both have served on the UW Alumni Association Board of Trustees – at separate times – and have both been active participants in the UWAA’s Legislative Advocacy Committee and UW Impact.

“It is so nice to know we are playing a part in the life of the University,” says Dave. Marcie adds, “We don’t have children, so we’ve adopted the University and we take great pleasure in being around students and seeing their academic, creative, and civic involvement.” And it gives the UWAA and the UW tremendous pleasure to recognize these two amazing individuals who continue to give so much to their alma mater.