Dying of a terminal illness, living on the streets

Columns staff writer Julie Garner talks to two men facing death, and the people who care for them.

In February, James Carlysle Attebery took a syringe and injected heroin into his kidney dialysis catheter.

All hell broke loose. A few days later, he suffered a stroke, followed by a heart attack, and was admitted to Harborview Medical Center on Feb. 10. Now, several weeks later, an infection rages around the tissues of his heart. It also is causing problems in his lungs and eyes.

On a cold, windy March day, Attebery is lying in his Harborview hospital bed. His heroin addiction of 20 years led to a disease called AA amyloidosis. That, compounded by diabetes, has resulted in his kidneys failing. He is blind in one eye. But he looks too young to be this sick. Despite the swollen, scarred arms and the patch over his right eye, a swatch of silky, dark hair renders him more youthful than his 46 years. Repeatedly, Attebery tells me, “I’m afraid.” 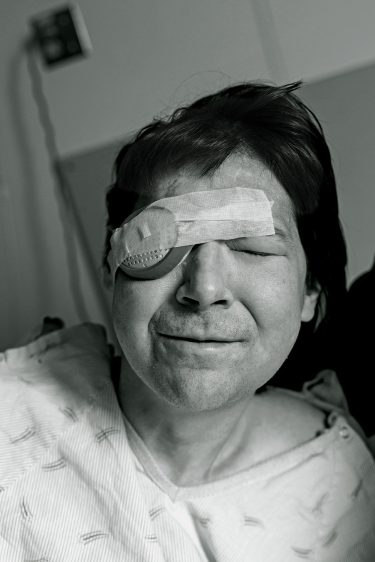 It’s impossible to convey the isolation Attebery feels. But heroin is a demanding mistress that prevented him from fully engaging in the two experiences that mark adult life: love and work. He hasn’t worked in years and his addiction wreaked havoc on most of his relationships.

But there is one person who has visited him every week during the past year without fail. She has tracked him down on the street and tended to his medical needs. She connected him with case managers who found him medical respite care and housing after he’d lived 10 years on and off the streets of Seattle. She helped him complete an advance directive with durable power of attorney. That means Attebery’s medical team can follow his brother’s instructions if Attebery is unable to communicate. More importantly, Colette Conlisk, a Harborview nurse, listens—to Attebery’s fears, regrets, everything. She does not judge him. She holds his hand and tells him she will be there for him. She tells him that she cares.

Conlisk is 30 years old and has spent all eight years of her nursing career at Harborview. She is lovely without makeup or stylish clothes. Conlisk is part of a skeleton crew that comprises the Homeless Palliative Care Outreach Team run out of Harborview’s Pioneer Square Clinic. But even with its small $200,000 budget, Harborview, a UW Medicine teaching hospital, is the first in the country to dispatch a palliative care team to care for people who are homeless. There are four people on the team: Conlisk; Tony Boxwell, nurse practitioner; Daniel Lam, clinical assistant professor of medicine and medical director of Palliative Care Services; and Edward Dwyer-O’Connor, senior manager of Harborview’s Downtown Programs and Ambulatory and Allied Care Services.

As you could imagine, homelessness significantly increases a person’s risk of premature death. In fact, being homeless makes premature death three to four times more likely than for the general population. The primary cause of deaths among the homeless: acute chronic medical conditions. If that weren’t sad enough, the risk of premature death is increased by high rates of mental illness and chemical dependency, according to the National Health Care for the Homeless Council. 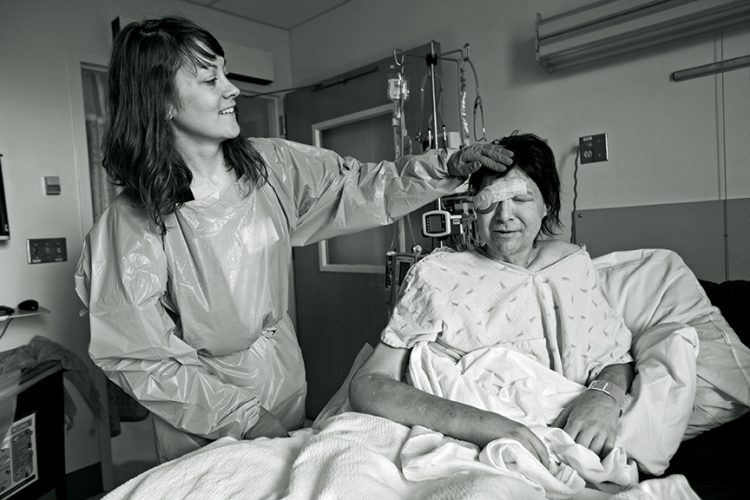 Conlisk and Boxwell carry a caseload of approximately 45 people even though they work only part-time. While their work is vital, it barely makes a dent since more than 4,500 people slept outside in Seattle and King County, according to the One Night Count in January. The duo from Harborview find their homeless patients where they hang out—on the street, in their cars and in encampments, as well as shelters and various kinds of public housing.

Their goal? To provide some relief from distressing mental and physical symptoms. Conlisk explains that palliative care, which is provided for someone suffering from serious illness, is not the same as hospice care, which is given only during the last six months of a person’s life. Patients have regular visits from nurses, physical therapists, occupational therapists, spiritual care providers, social workers and volunteers with hospice. While palliative care offers fewer services, the main goal is similar: keeping patients comfortable and minimizing pain.

When Attebery was living on the street, keeping control of his diabetes was next to impossible. “Some people’s blood sugar is all over the place regardless of how well they take their insulin,” Conlisk explains. “When you are homeless, your meals are inconsistent and cheap food is often high in sugar and carbohydrates.”

Caring for people where they reside has been the model for about the past 15 years. Prior to that, the “clean and sober” model prevailed. You had to be clean and sober and land a job before you could be helped with housing and health care. “Now, we accept them where they are,” Conlisk says. “If they are heroin addicts, we try to get them into needle exchange [programs] or onto methadone to improve their overall health. We see a lot of congestive heart failure that might be best treated with 10 medications. Maybe we’ll choose the most important two. You don’t ask people to do what they cannot do.”

Attebery wasn’t always a homeless heroin addict. He moved to Seattle at the age of 14 after living in the Tri-Cities, Bellingham and other towns throughout Washington state. He grew up, owned a comic book store in Redmond, was married, had children, and bought a five-bedroom house in Kirkland. Then the marriage dissolved. He lost his children. Then he lost the house. He was so sad that he closed his business. “I thought I was just really, really sad. I didn’t know what it was.” Attebery wasn’t just sad; he suffered from bipolar disorder. He began hanging around the OK Hotel in Pioneer Square with musicians who drank heavily and used heroin. “I started using heroin at 28. I feel like I’m 90,” says Attebery. “I’m scared. I’m miserable. I don’t know what I’d be doing without Colette.” It was Conlisk who worked with a case manager to help Attebery finally secure housing last October after he was homeless for a year. Attebery is also being treated for depression.

“He was pretty high-functioning for a long time, but he has these really low depressions. The problems with our mental-health system are a huge part of it,” Conlisk laments. Harborview deploys a mental-health team of five clinicians in seven shelter sites throughout downtown Seattle to serve homeless people with behavioral health problems. Additionally, there are 15 UW Medicine nurses and physicians working out of two clinics and five other sites in the central city core. “We are dealing mostly with single adults, 80 percent men,” says Dwyer-O’Connor, who manages the Pioneer Square Clinic. “They don’t live very long. If they live past age 50, they are doing very well. Very few live long enough to be on Medicare. Most of the folks we work with have chemical dependency or mental-health issues.” 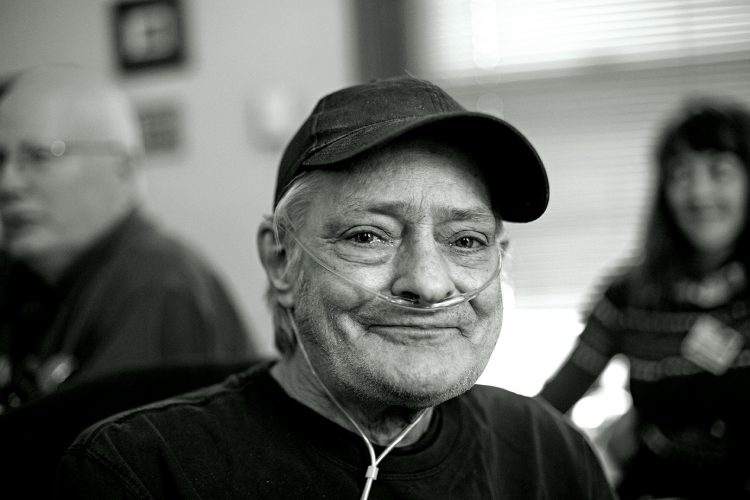 Stan Foreman beat the odds. At age 64, he lives at St. Martin’s Westlake, a facility for homeless men. Its location is at odds with the espresso shop and Italian grocery next door and the six cranes across the street that are erecting high-end housing. To live at St. Martin’s, you have to be a chronically homeless man at least 55 years of age. Foreman was living on the street after he went against doctor’s orders and discharged himself from Harborview following treatment for pneumonia. If you have lung disease, like Foreman does, living on the streets is a recipe for pneumonia. Now he sees Boxwell and/or Conlisk once a week in addition to visits from hospice workers.

His room is about the size of an area rug. He’s got a collection of film noir VHS tapes and his bookshelves hold books by Charles Dickens, Mark Twain and Sigmund Freud. Even though he has spent a lot of his life strung out on heroin, it’s the cigarette-related Chronic Obstructive Pulmonary Disease (COPD) that has landed him on hospice care. He has about six months left.

On this sunny, spring afternoon, Foreman is drinking chocolate cola spiked with bourbon. “I tell people that all the cocaine and heroin was good for me compared to cigarettes and alcohol,” he says, “the two legal killers.”

Foreman grew up in Shoreline; his father was an alcoholic, one of 11 children—10 of whom died from smoking-related diseases. “I’ve been a lush since I have been a teenager. It’s one of the ironies of my situation that I have probably chaired thousands of Alcoholics Anonymous and Narcotics Anonymous meetings,” he says. A charming man who loves to tell stories about his days as a hippie in the 1960s, he has a lively, self-deprecating sense of humor. “I’ve had hundreds of jobs,” he says. “Some of them lasted for weeks.”

Like Attebery, Foreman once owned a house, in White Center, with a picket fence and every kind of fruit tree and bush. Today he wears an oxygen cannula. Because breathing is so difficult, he can’t walk very far without becoming winded. So he spends most of his time alone in his cramped, dark room. He is always grateful when Boxwell, Conlisk and his hospice workers stop by. “I have all this wonderful interaction. It makes me so happy,” he says. “The weekends are interminable. I just sit here feeling so sick and miserable, so I look forward to weekdays when I have these visits.” Unlike many chronically homeless men, Foreman maintains contact with his three children, his mother and his three sisters. One sister lives in Greenwood, and suffers from COPD in addition to severe arthritis. She has almost no support system. But Foreman calls her every day. His two other sisters and mother visited him in the spring. “It’s giving me something to hang in there for,” he says.

Both Attebery and Foreman feel gratitude for Colette Conlisk and Tony Boxwell. The two nurses provide comfort and regular human contact that would vanish if the Palliative Care Program for the Homeless closed. That’s why Dwyer-O’Connor is ramping up budget requests in hopes of expanding the program to reach more of Seattle’s homeless population.

Maybe the rest of us could take Colette Conlisk’s approach: “I think a lot more. It changes how I approach people and how I look at how someone gets to a place. I am less judgmental. There are reasons they are the way they are. It makes me grateful for what I have. At the end of the day, no matter how hard it is, I get to go to the grocery store.”

Julie Garner is a staff writer for Columns Magazine. Ron Wurzer is a freelance photographer.