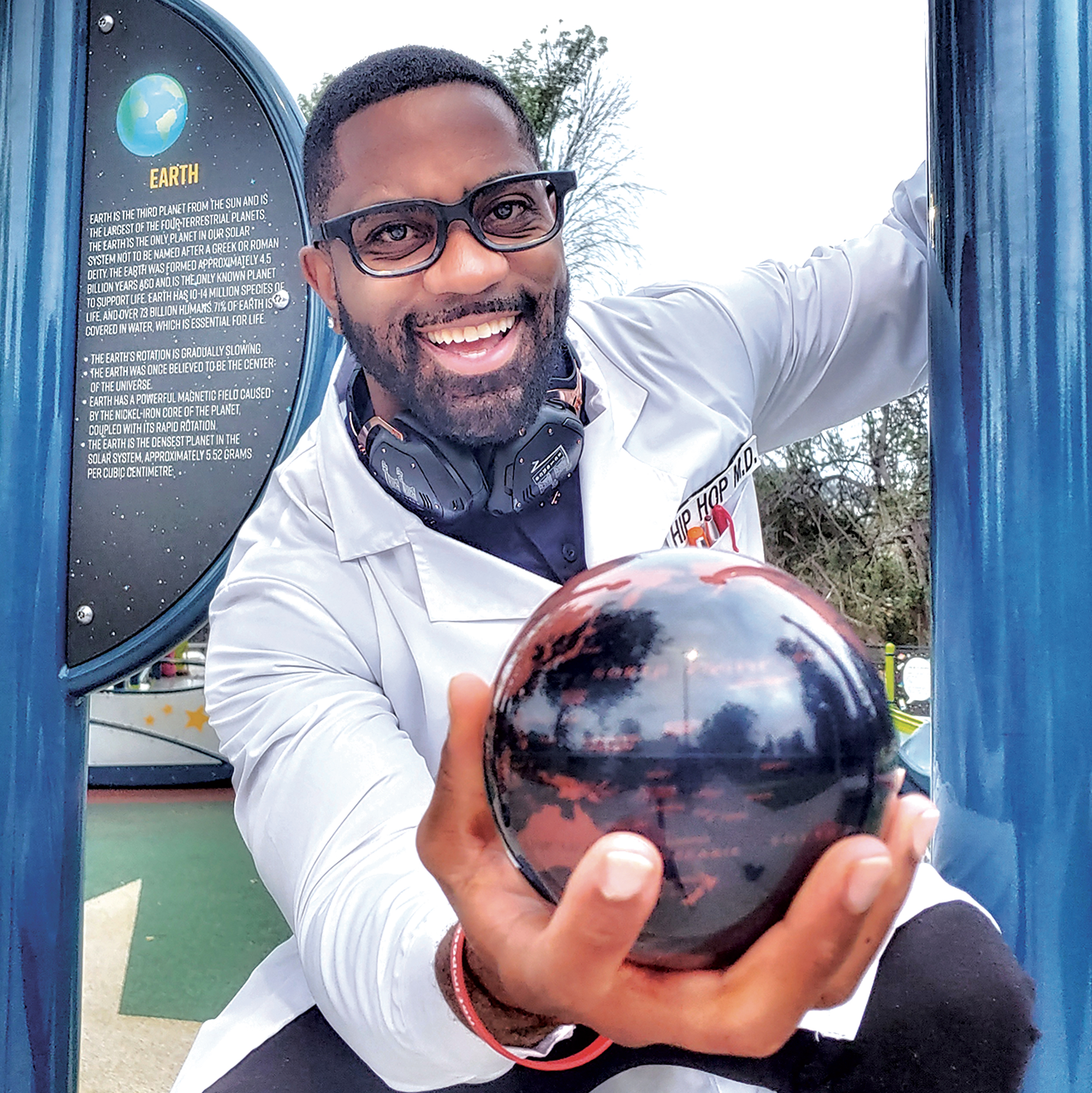 “What happened to Bobby Shmurda’s hat?” and “Black Superpowers: The Science of Melanin” are not your typical science lessons, but the Hip Hop M.D., Maynard Okereke, is not your typical scientist. Okereke, ’06, fuses science with hip hop and current pop culture as a way to present science, technology, engineering and mathematics (STEM) topics in a more relatable and palatable way for underrepresented kids of color. According to the National Science Foundation, the STEM workforce is 89% white. As an award-winning science communicator, Okereke hopes to create the kind of representation through Hip Hop M.D. that inspires kids of color to get excited about STEM.

Okereke is Nigerian American. After his birth and early childhood in Austin, Texas, his family moved to Cameroon for five years and then returned to the U.S. Coming from West Africa to Vancouver, Washington, was a bit of a shock. “There was a lot of culture clash,” Okereke says. “I was really the only one that looked like me in pretty much all of my classes. It was pretty tough.” Not only did he look different than his classmates, “there weren’t teachers [who looked like him], I didn’t have a lot of peers, I didn’t have people in my family who were involved in any of the STEM fields,” Okereke says. “A lot of it was just me learning on my own and exploring it, just being curious and asking questions.”

Okereke felt neither supported nor inspired by his teachers, but his parents always encouraged his intrinsic love for science. “I remember my mom got me these wildlife fact cards,” Okereke says. “It was Nat Geo-type of wildlife fact cards you’d collect. I collected this whole huge binder of all these crazy wildlife facts of where animals live, their geography, their biology, reproduction, all these different cool facts about different species. To this day, I think that’s what really sparked a lot of my wildlife focus on a lot of things that I do because I can still name and drop random wildlife facts about all sorts of organisms.”

Okereke came to the UW to study wildlife biology and found community by joining with the African Student Association and the National Society of Black Engineers. He also pledged a Black fraternity, Phi Beta Sigma. “I was able to develop a lot of unique mentors through that,” he says. “I always look back and appreciate those moments when we were able to build that community and do a lot of unique things early on just from our exposure and things that were around at UW.”

“I really wanted to be able to live in this space where I can be my authentic true self and do the day-to-day things that I love and not feel like I have to separate them. The Hip Hop Science platform has been that for me.”

Like many children of immigrant parents, Okereke wanted to help support his family once he was out of school, so he changed his major to civil environmental engineering. But the lack of underrepresented minorities in the field made for a difficult and discriminatory working environment. People he was working with and contractors he encountered “didn’t believe that I was an engineer or that I had the capacity to be able to do the job,” he says.

Okereke felt happiest working on his side projects in music and producing. “I felt like I was walking into the office, and I was like, Clark Kent,” he says. “I’d be one person here and then I’d go outside of work and I’d be another person.” So he resigned and moved to Los Angeles to pursue his passions for science and entertainment. “I was still a science nerd at heart, but I also wanted to find a cool, interesting way to present these types of topics,” he says. “I really wanted to be able to live in this space where I can be my authentic true self and do the day-to-day things that I love and not feel like I have to separate them. The Hip Hop Science platform has been that for me.”

Okereke’s experience in school and as an engineer is something many kids and young adults of color can relate to. That’s why Okereke doesn’t shy away from referencing racial-justice issues and civil-rights movements like the activism that has occurred after George Floyd’s death at the hands of police. To reach Black students and other students of color, he knows that he has to meet them where they are. “You can’t go to school and focus on school when all of these different things are going on outside and in your personal lives, because that translates and affects everything that you’re doing overall,” Okereke says.

Floyd’s murder and the ensuing activism has generated some racial and cultural awakening among educators, and they have turned to Okereke, inviting to him speak at schools and colleges and share his platform to a broader audience. Okereke hopes to continue to bridge the social, economic and education gaps in STEM by uplifting and empowering youth of color and their teachers. “Sometimes you may not even know where your interests lie until you find that community or see some other people doing something cool in an area that you didn’t really know much about,” he says. “I really want to showcase that, ‘Hey you can be your authentic true self in these different spaces and there’s a voice for you no matter what your background is, no matter where you came from.’”