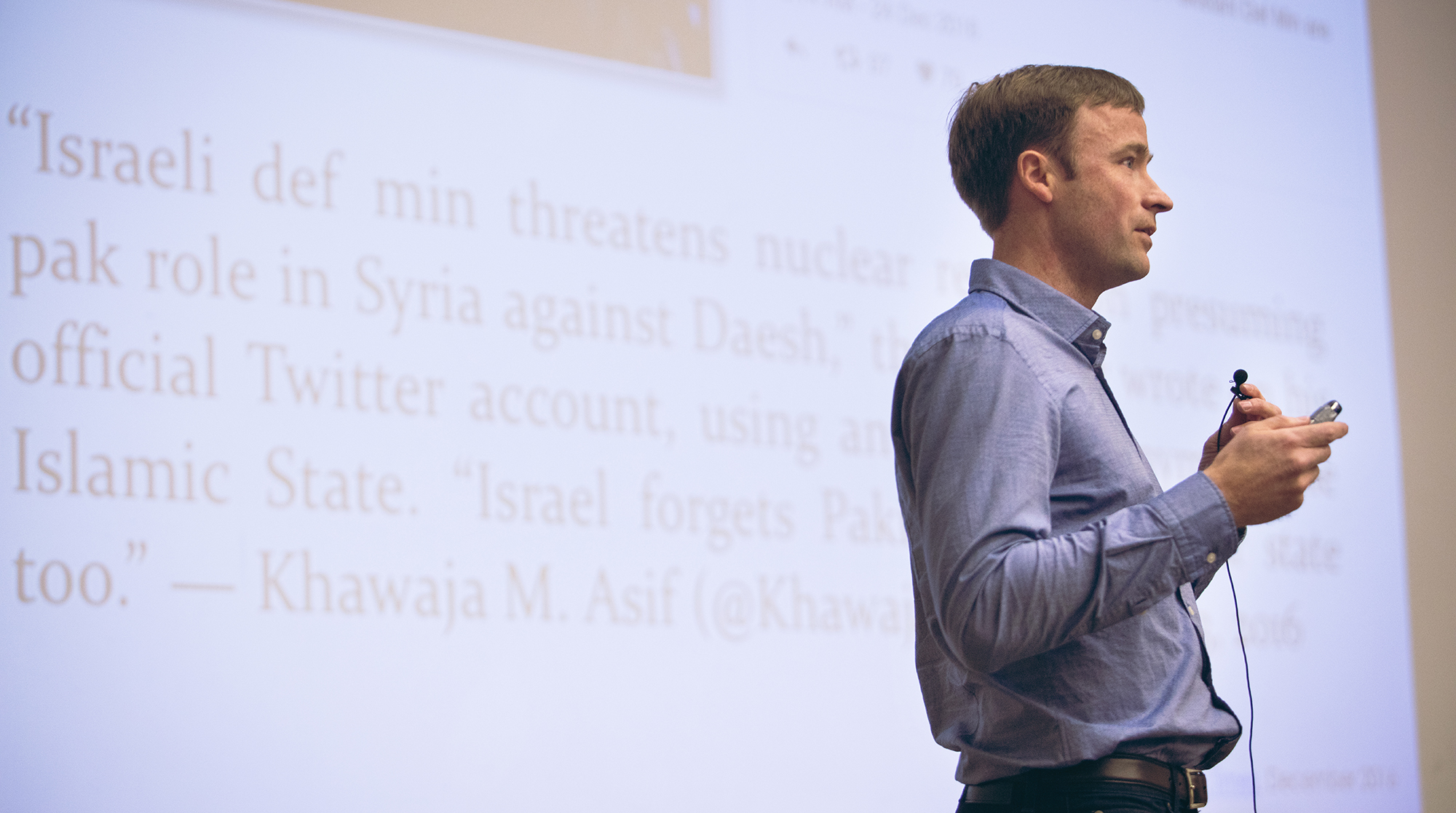 Students can't help but chuckle as biology professor Carl Bergstrom greets them on the first day of class. It's not often that a teacher says the word "bulls—" more than 10 times in a minute, and this teacher really seems to enjoy saying it.

“So much bulls—,” Bergstrom tells the packed auditorium on March 29. “Everywhere. We’re drowning in it.”

As for ordinary people? They’re not off the hook. “Americans spend nearly an hour a day on Facebook,” Bergstrom says. “Doing what? Mostly spreading bulls—.”

Bergstrom teamed up with Jevin West, an assistant professor in the iSchool, to design a curriculum that explains how to recognize and refute falsehoods—whether they’re disguised as rumors, gossip, bombast, urban legends, shoddy science or fake news. The curriculum is now a 1-credit seminar, candidly titled “Calling Bulls— in the Age of Big Data.”

By studying both statistics and philosophy—yes, there are philosophical texts about BS—students will learn to think critically, scrutinize sources, and call out tall tales with tact and respect. “Why most published scientific results are false” is one reading assignment. Another: “Inside a fake news sausage-factory.” (If you want to follow along at home, all of the materials are on the course website.)

After his profanity-laced introduction, Bergstrom hands the mic to West, who warns that BS is more than empty hype and embellished marketing. “It can get real,” he says. “It can be life or death.”

He pulls up a fake news story about Israel and Pakistan. The bogus report claimed that Israel’s defense minister threatened to nuke Pakistan if they intervened in Syria. After reading the story, Pakistan’s defense minister took to Twitter to respond: “Israel forgets Pakistan is a Nuclear state too,” he wrote, which was interpreted as a casual threat of nuclear war.

“This is crazy,” West says. “This sort of thing is happening all the time.” (He later discussed PizzaGate.)

Bergstrom and West say the class has been in the works for years and is not a dig at the Trump administration, which has been tied to several high-profile fake news stories. Wherever you fall on the political spectrum, you will probably agree that BS is an ancient art form—a bipartisan way to dupe, swindle and misinform.

But why are Bergstrom and West the right people to teach it?

“What Carl and I do for a living, when we get paid by your tax dollars, is spend a lot of time calling bulls— in science,” West says, referring to the peer review process for articles, proposals and reports. Now, they’re going to show students how to apply the same principles to daily life. The seminar, which is a prototype for a 3-credit class to be offered in the fall, has attracted nationwide media attention. As proof of the seminar’s popularity, West pulls up a graph measuring the traffic on their course website. It’s an upward slope that starts with 100,000 views on Jan. 19 and ends with 250,000 views on Feb. 22. West says the graph is evidence of “explosive growth.”

Before he can move on to the next slide, Bergstrom interjects: “Wait a minute,” he says, taking the mic from West. “I’m a little bit suspicious about what we just saw.”

Bergstrom explains how the graph is deceptive: It starts measuring at 100,000 page views—not at zero page views—so we can’t be sure how fast the growth occurred. More important, the graph is measuring total unique visitors, a cumulative statistic that technically cannot decrease. “What do we expect to happen to total unique visitors?” Bergstrom asks. “Of course it’s going up.”

That’s why big data is a focus of the class: it’s one of the primary ways that people spread falsehoods and get away with it. After all, numbers and graphs look real and reputable. By taking this seminar, students will learn how to dodge statistical traps and distinguish association from causation.

That’s not to say they’ll become immune to deception. After the class ends, we catch up with Bergstrom and West to ask how often they personally fall for BS.

“All the time,” they say in unison.