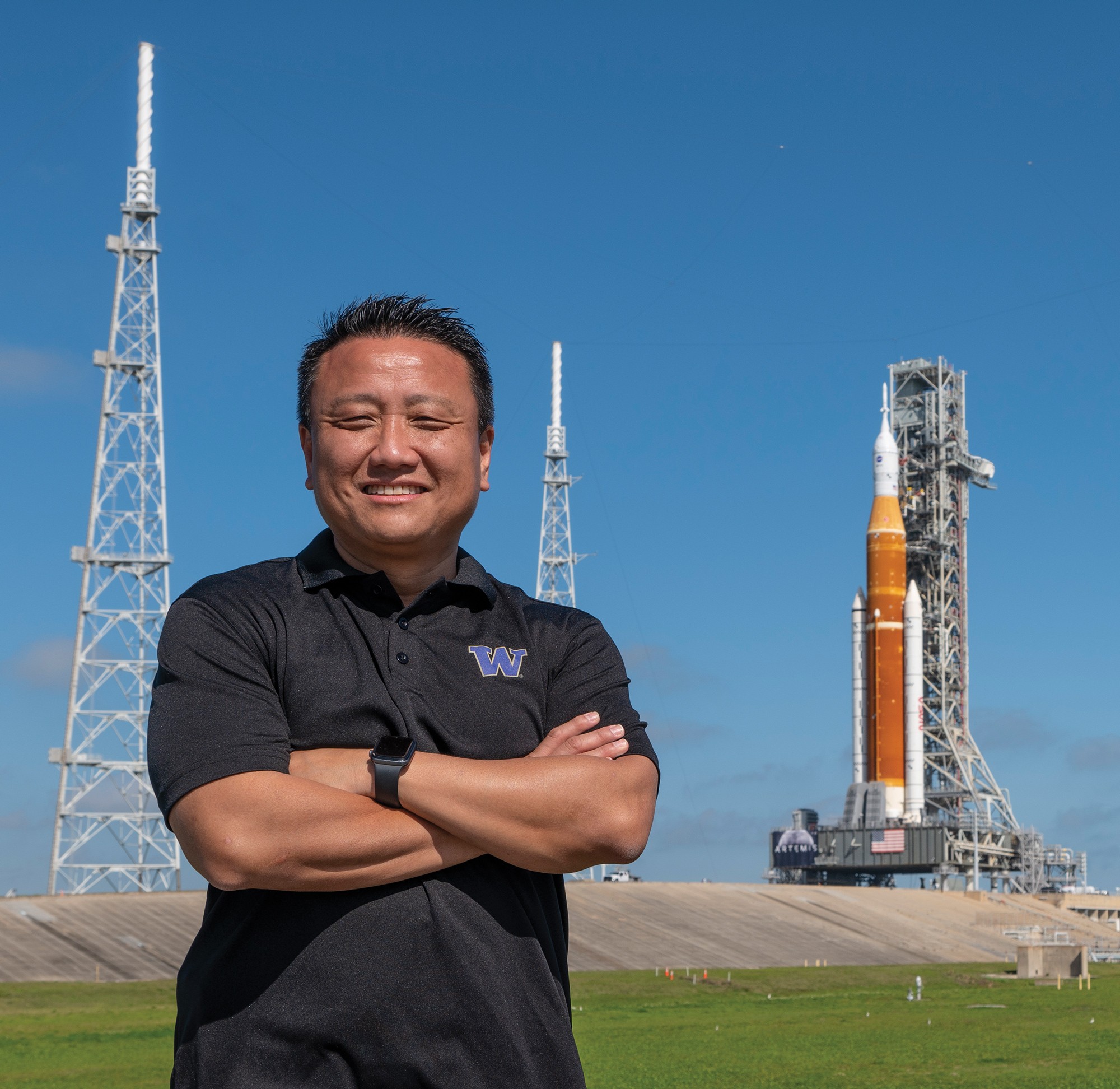 NASA is going back to the moon and planning to land humans on Mars, thanks in part to Orion manager Howard Hu, ’91, ’94.

From the moment his dad took him to see “Star Wars” when he was a kid, Howard Hu knew he wanted to design and build spaceships. That dream has become a reality. Hu, ’91, ’94, who has worked for NASA his entire career, was recently promoted to head up NASA’s Orion program, which will send an unmanned spaceship on a test flight around the moon in the next few months.

Orion is one part of NASA’s audacious Artemis project, which plans to return astronauts to the lunar surface by 2025—and prepare for human missions to Mars. One Artemis priority is to land the first woman and first person of color on the moon. “This represents humanity for everyone,” says Hu, an immigrant from Shanghai who moved with his family to Seattle when he was little. “This will prove that Orion was for all to explore space.”

Hu, who holds two degrees in aeronautics and astronautics from the UW College of Engineering, grew up in the North Seattle area and went to Shorecrest High School. He was always good at math and science and read a lot of science fiction books. Seeing George Lucas’ milestone movie made him wonder how he could work in a field that combined engineering and space exploration. On an April day in 1981, a teacher rolled a TV cart into his classroom so students could watch the first Space Shuttle launch. That sealed the deal for Hu.

Hu went to work for NASA and has been there for 30 years, most recently in a number of Orion leadership positions, including manager of avionics, power and software, as well as deputy manager of the Vehicle Integration Office. Before Orion, he had an impressive resume of important technical and leadership roles in support of NASA human exploration initiatives, the International Space Station and Space Shuttle program.  And now, he has one of NASA’s highest-profile roles. “NASA is working to build a long-term human presence on and around the moon that will benefit people on Earth,” says Vanessa Wyche, director of the Johnson Space Center in Houston, where Hu is based.

Orion will lift off using the most powerful rocket in the world. It will fly farther than any spacecraft built for humans has ever flown, traveling approximately 240,000 miles to the moon and approximately 40,000 miles beyond the moon during its four- to six-week mission. Orion is also the product of international collaboration not seen since the International Space Station was built. Orion, which made its first flight test in December 2014, will be powered by a service module provided by the European Space Agency. Orion will eventually carry up to six astronauts, compared to the three that flew to the moon on Apollo. Moreover, the European service module that is part of Orion will use refurbished engines from the Space Shuttle program.

“I have been working on the program for a long time,” Hu says. “This is a big dream come true. I came to work on space explorations at the cusp of the future. I am leading a team and the infrastructure to explore beyond Earth. And I can’t wait to launch it.”