For 85 years, Husky Deli has warmed the hearts of Huskies in West Seattle with scrumptious sandwiches, house-made ice cream, goodies from the world over, and the caring touch of the Miller family.

Sure, you can order groceries with one click from Amazon Fresh but it doesn’t take the place of walking into the homey heart of West Seattle’s Junction neighborhood and ordering the Husky Deli’s best-selling grilled chicken pesto sandwich or getting a homemade ice cream. Or, better still, talking to Jack Miller, the former UW student whose family has owned the West Seattle landmark eatery since 1932.

With a twinkle in his eye and one dimpled cheek, Miller is a cheerful, hearty soul with a welcoming smile for everyone, whether they’re a newbie or a regular. He’s a third-generation owner who says there hasn’t been a day he hasn’t loved coming to work since he was 10 years old, when he started making ice cream in the back with his dad. 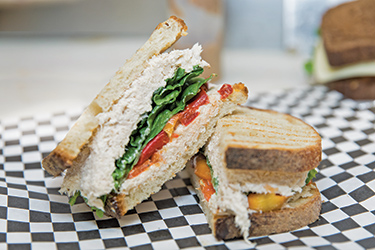 The deli, which is known and loved by Huskies far and wide, exudes the best of old Seattle and provides the kind of stability the city lacks at a time when building cranes dot the skyline and it’s getting harder and harder to make rent.

Strolling through the deli, with its old linoleum floors and friendly staff, many of whom are related to Miller, is a feel-good experience that a mouse click can’t buy. The house-made ice cream has earned a reputation as the best in the city and West Seattle youth teams regularly stop by after a game, especially the kids who play for the Husky Deli-sponsored baseball team.

No, you won’t find goat cheese beet swirl or rose geranium flavors at the Husky Deli. However, for standards like vanilla or Rocky Road, it can’t be beat. Miller did break down recently and make salted caramel ice cream. “It turned out great,” he admits. 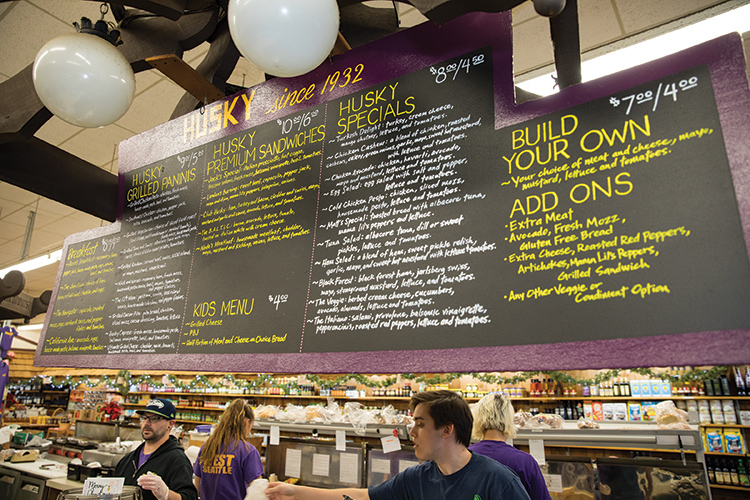 The sandwich board at Husky Deli (above) is dazzling and delicious. And the employees, most of whom are members of the Millers, will treat you like family. 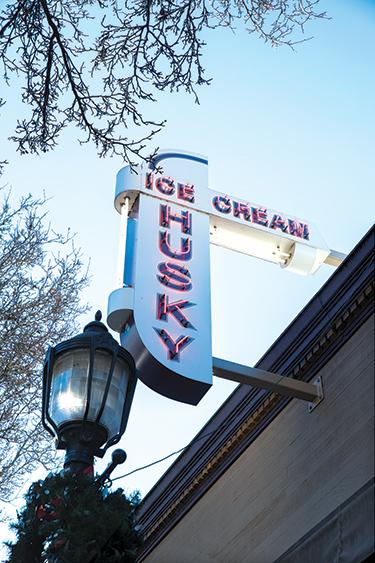 Since it began during the Great Depression, the Husky has been famous throughout Western Washington for its ice cream, which is made by hand in the back of the shop.

Ringing the store is a selection of both local and imported specialty foods like tea from Harrod’s in London, Puget Sound-area preserves, even currant syrups to jazz up mimosas. If there’s a great European chocolate bar to be had, Husky Deli will have it.

Tuong Nguyen is in charge of ice cream production, a job he has held since 1983, but he’s worked at Husky Deli since 1975 when he emigrated from Vietnam. Jack’s wife, Heidi, another former UW student, gave up a 30-year nursing career to take charge of candy and specialty foods.

The deli even features a small selection of Washington state wine. While he admits craft beer is a money-maker, Miller’s not interested. “When I want a beer, I drink a Rainier. The rest of it is just pancake syrup to me,” he says.

Like his dad before him, Miller started college at the UW, in 1975. But one quarter into school, his dad landed in the hospital with a heart attack, so Miller dropped out to run the store, a decision he does not regret.

The Husky Deli offers up much more than victuals; it frequently can seem like the heart of the community. Miller told the Seattle Times that after the attacks of Sept. 11, 2001, the deli was packed to the rafters. People needing to come together instinctively sought out the Husky Deli that awful day.

Herman Miller, Jack’s grandfather, named the place not after the UW mascot but from an ice cream concoction he created that got the family through the Great Depression: a large ice cream cone rolled in chocolate and nuts. Herman dubbed it “the Husky” and the name of the deli was born (and trademarked). But Jack and his family are die-hard Husky fans even though he has only been to a handful of football games. His store colors, after all, are purple and gold.

Of the deli’s 40 employees, probably 10 work there full time. “There are 24 grandkids and they have all worked here or they will. Any remote relative has worked here. It’s a rite of passage,” he explains. 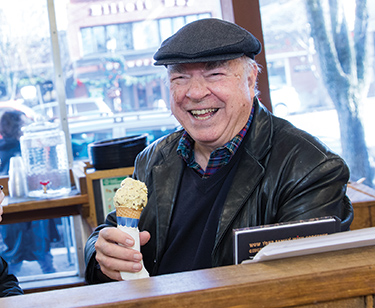 Guy W. Farmer, ’57, a political columnist for the Nevada Appeal, is a West Seattle High School grad who has been living on Husky Deli ice cream since he was a kid. Here, he digs into a cone of Husky Flake ice cream on a recent winter day.

Miller says it’s the perfect place for a young person to learn to work. Perusing a cellphone while a customer is waiting is a firing offense. Jack’s aunt, Mary Alice, who worked at the deli for 74 years from 1936 to 2010, was a formidable task master, he recalls. “When Alice was working, the girls would cry. I would tell them, ‘Once she calls you ‘honey,’ you’re golden.”

Husky Deli also caters events, cruises, company outings, school graduations, you name it. “When we graduated eighth grade, we got a kick in the butt. Now they get a cruise,” he says. Next time you’re in West Seattle, head for the Husky Deli and enjoy a local tradition that’s still going strong.