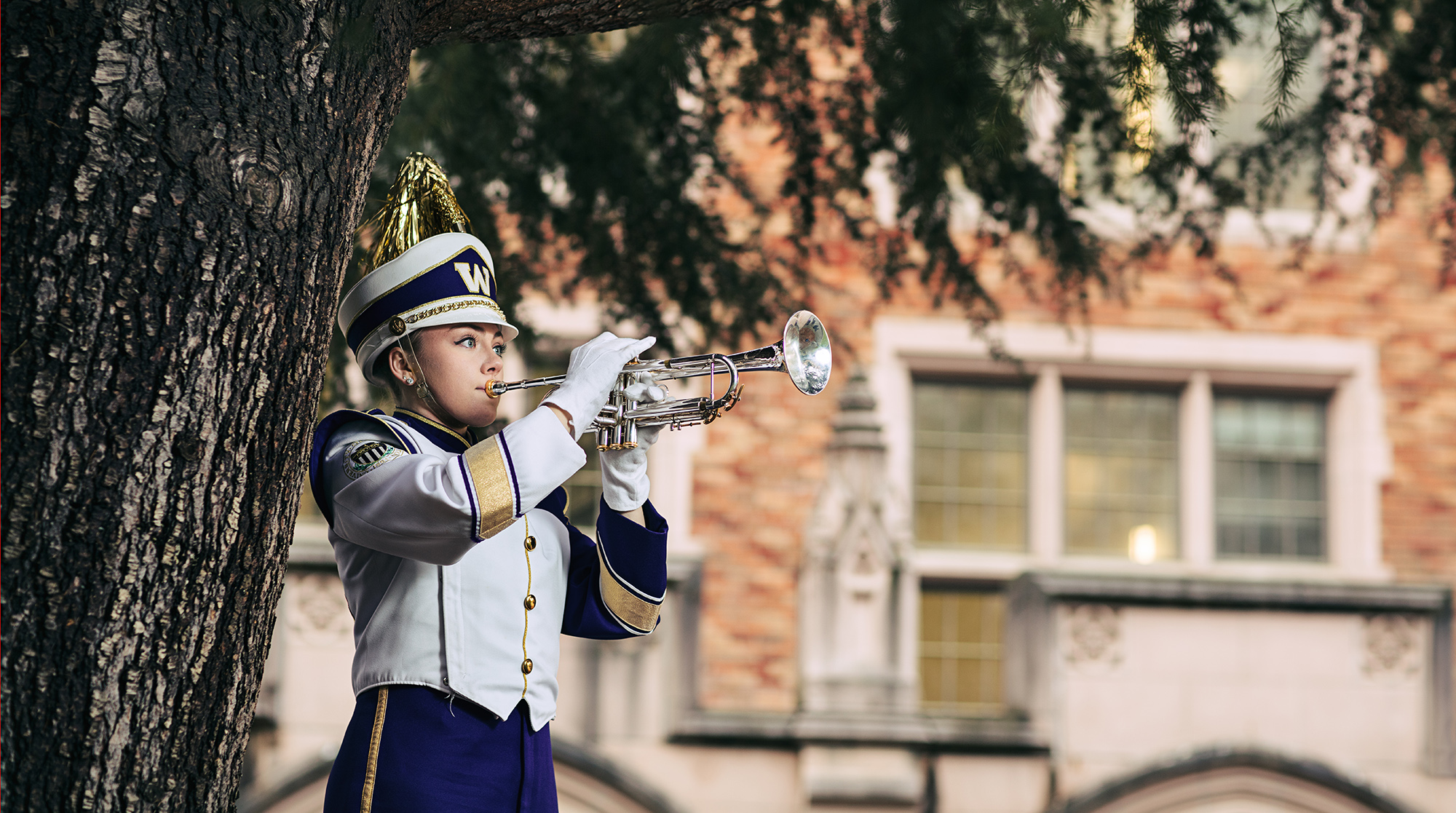 Marching around campus with the band

Leading up to the Fiesta Bowl, Columns Magazine photographed members of the Husky Marching Band in some of our favorite spots on the University of Washington campus.

at the HUB Bowling Alley. 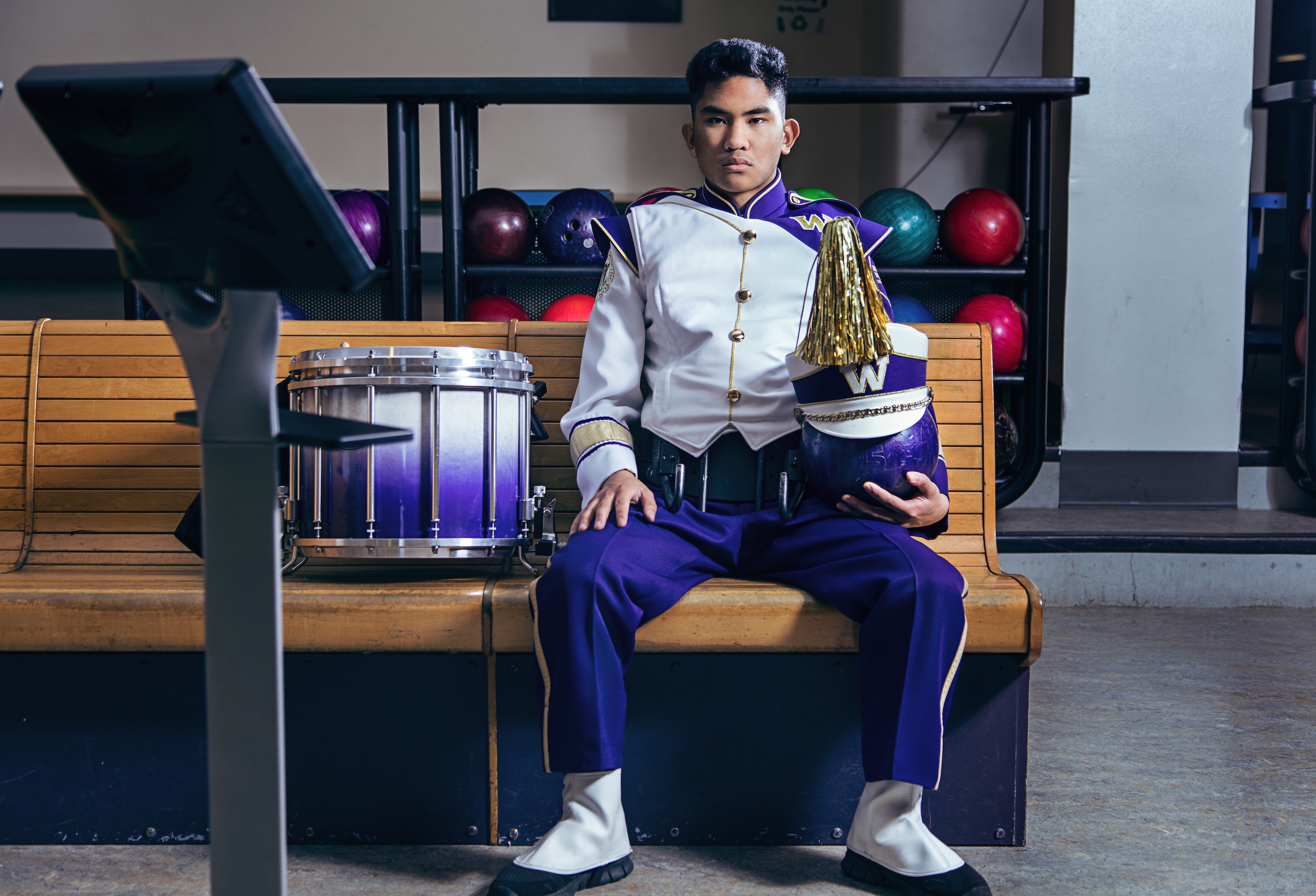 “I broke my leg in the home opener. I missed about half the season.

You know the whole notion that band kids should never run? That’s very much true. I was running from the Portage Bay parking garage to Husky Stadium. I tripped on the curb—I completely biffed it.

My fibula fractured in two places. Luckily I had a friend with me. I limped a mile from west campus all the way to the stadium. The athletic trainers put me in a boot.

I had surgery and recovered for six weeks. You can look at my scar if you want.” 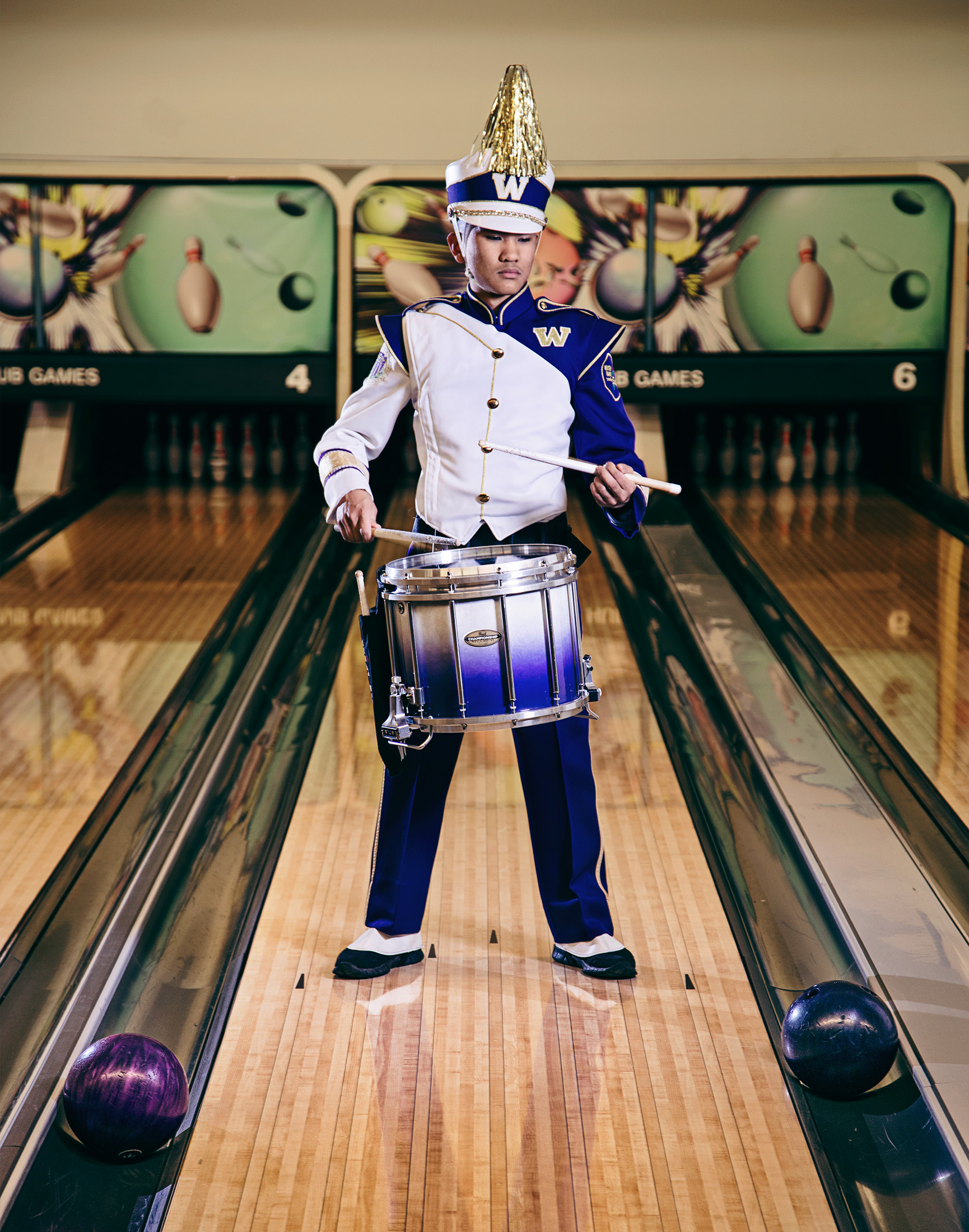 at the University Book Store. 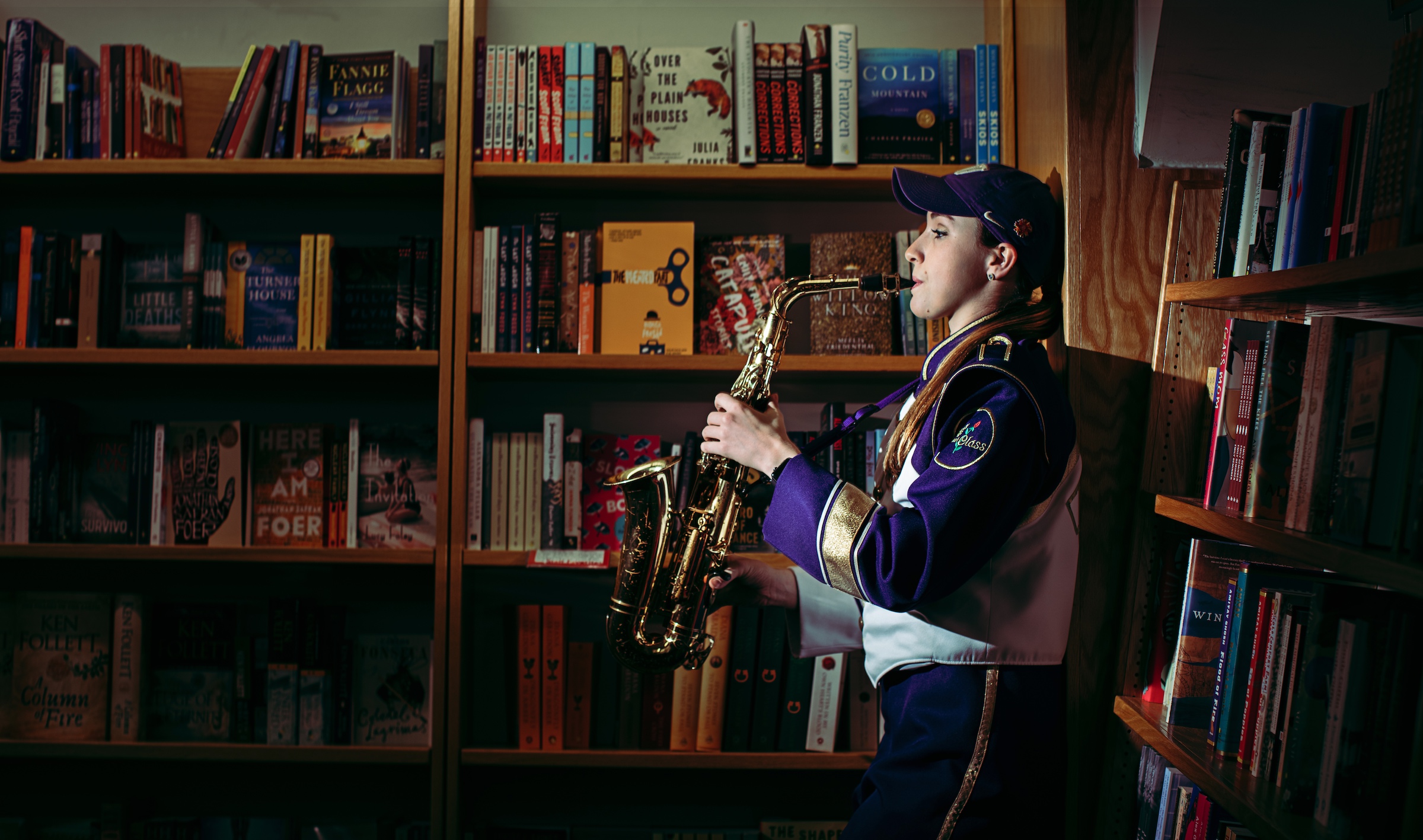 “When we were traveling to the Cactus Bowl down in Arizona a few years ago, the bus that the saxophones were on broke down. We had to sit on the curb to eat our dinner while they got us a new bus.

It was one of the best moments of the trip, because the section got to bond and laugh while we sat there and ate our food together.

This band is a family and I’m so incredibly lucky to be a part of it.” 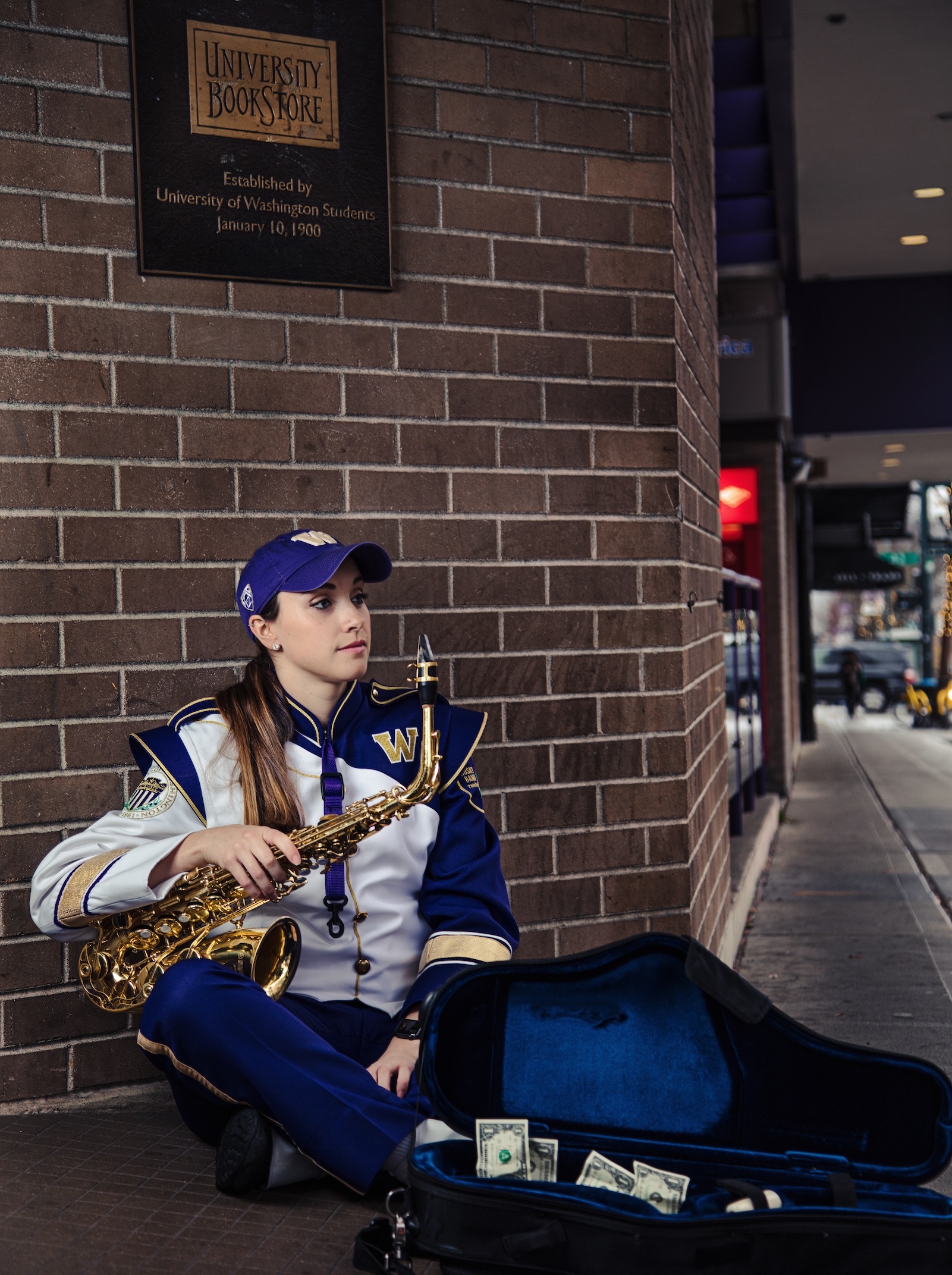 at By George Café. 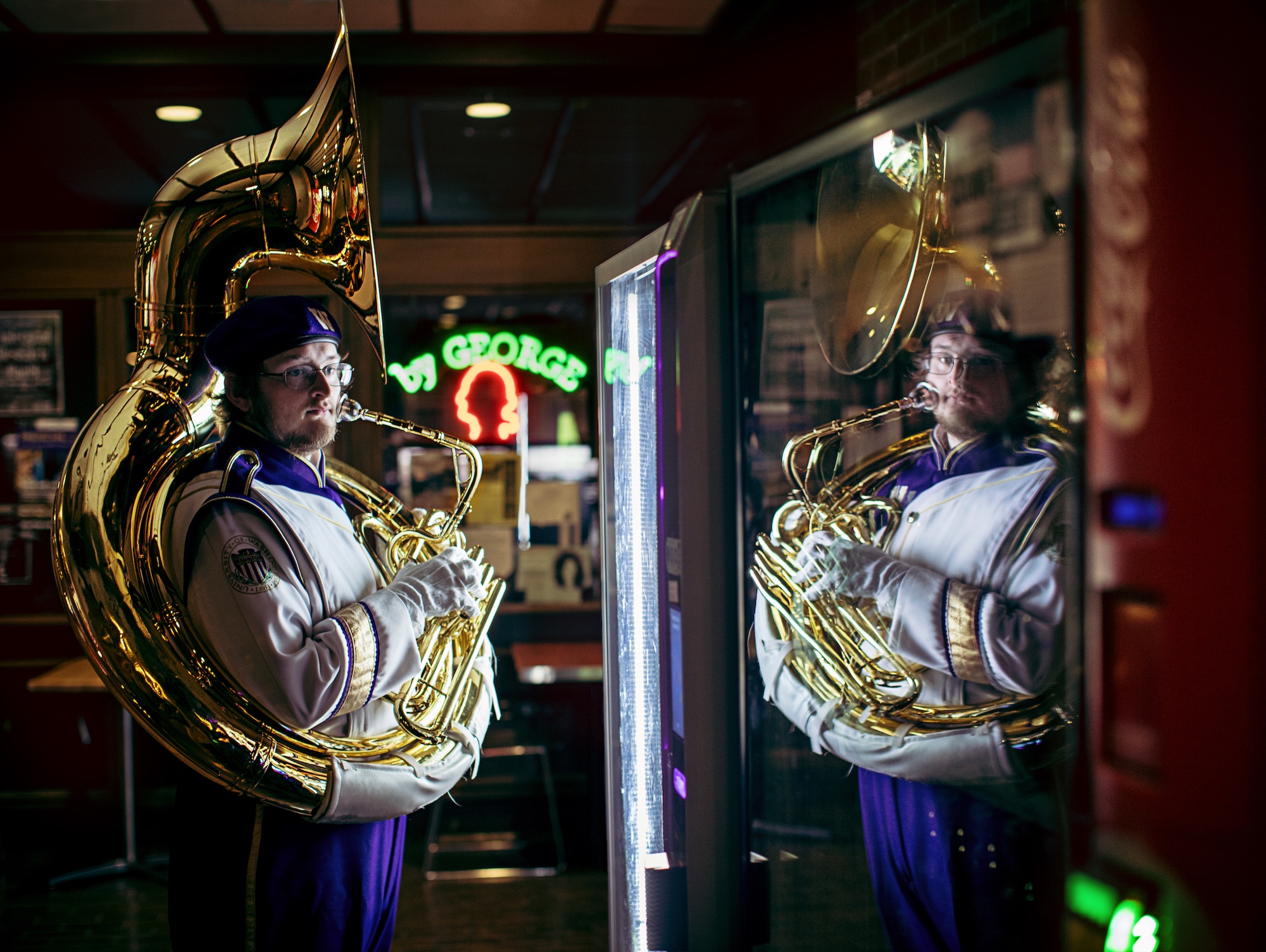 “Sousaphone players in general are relaxed and casual. The section is 16 strong this year.

I don’t really have senioritis, but I’m sousaphone section leader, and it’s kind of been a tough season having to manage a group of casual, relaxed people.

I’m not excited for it to be my last football game, but I’m kind of excited to not be a section leader anymore.” 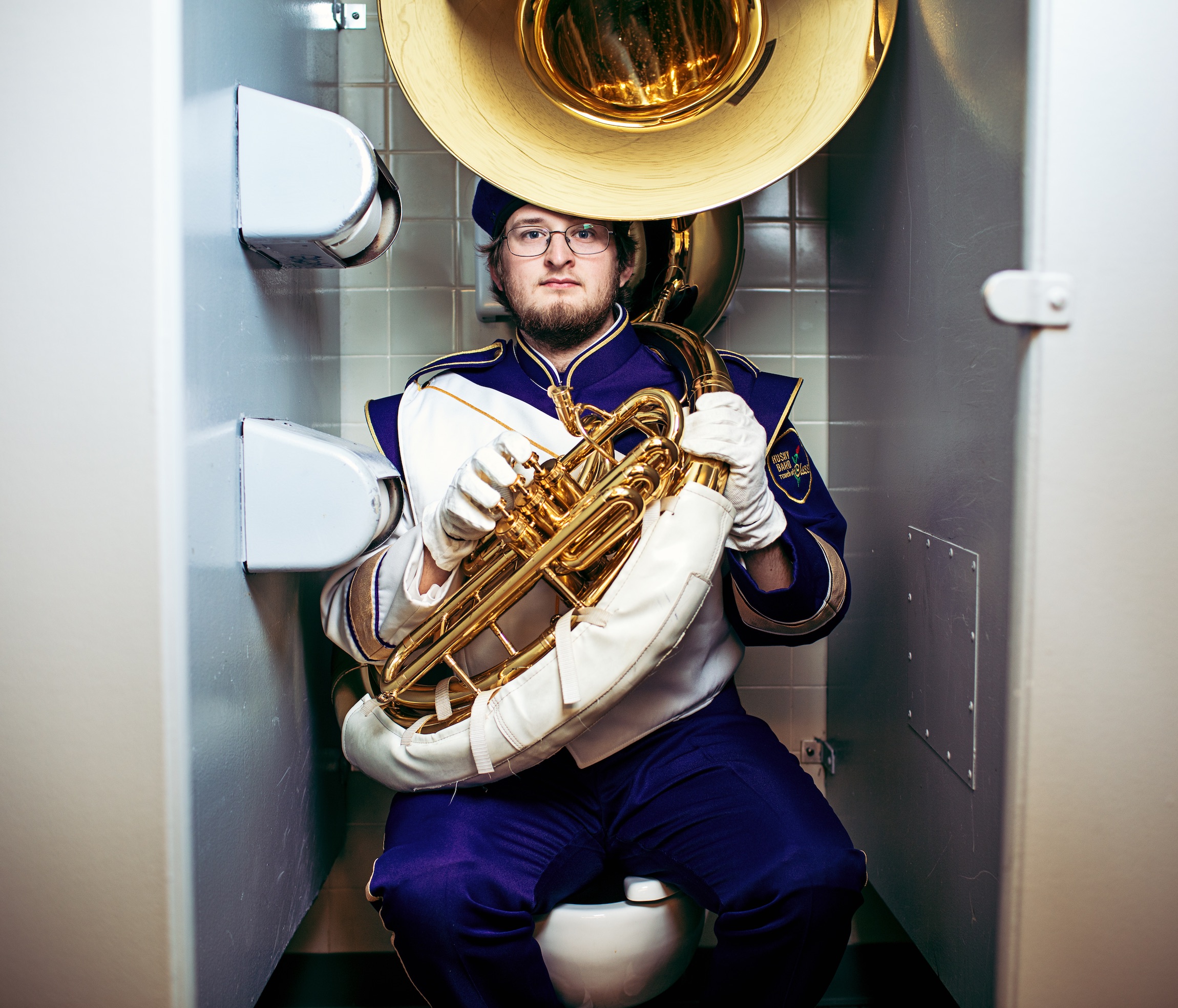 on the steps of Suzzallo Library. 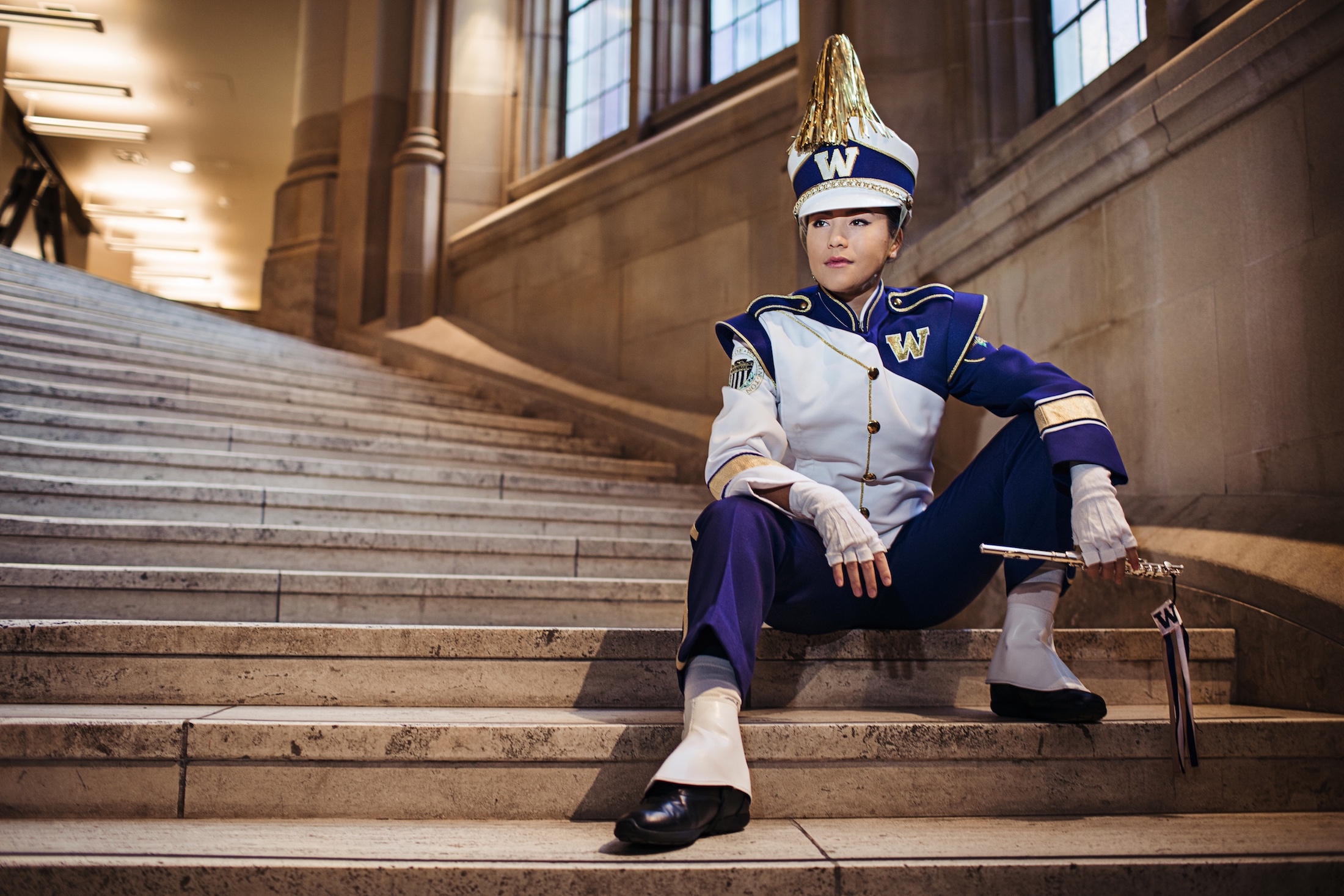 “The piccolos have the best choreography. We’re such a small instrument that we really have to use it, and our bodies, a lot.

I do Hawaiian and Tahitian dance—I’ve done hula for 16 years—and I’ve never danced as hard as I have in the Husky Marching Band.

In high school, I didn’t play an instrument in the marching band, but I played the piccolo on a few pieces in concert band. Then I came to UW and I’m like, ‘Oh my goodness, now I have to dance with the piccolo.’” 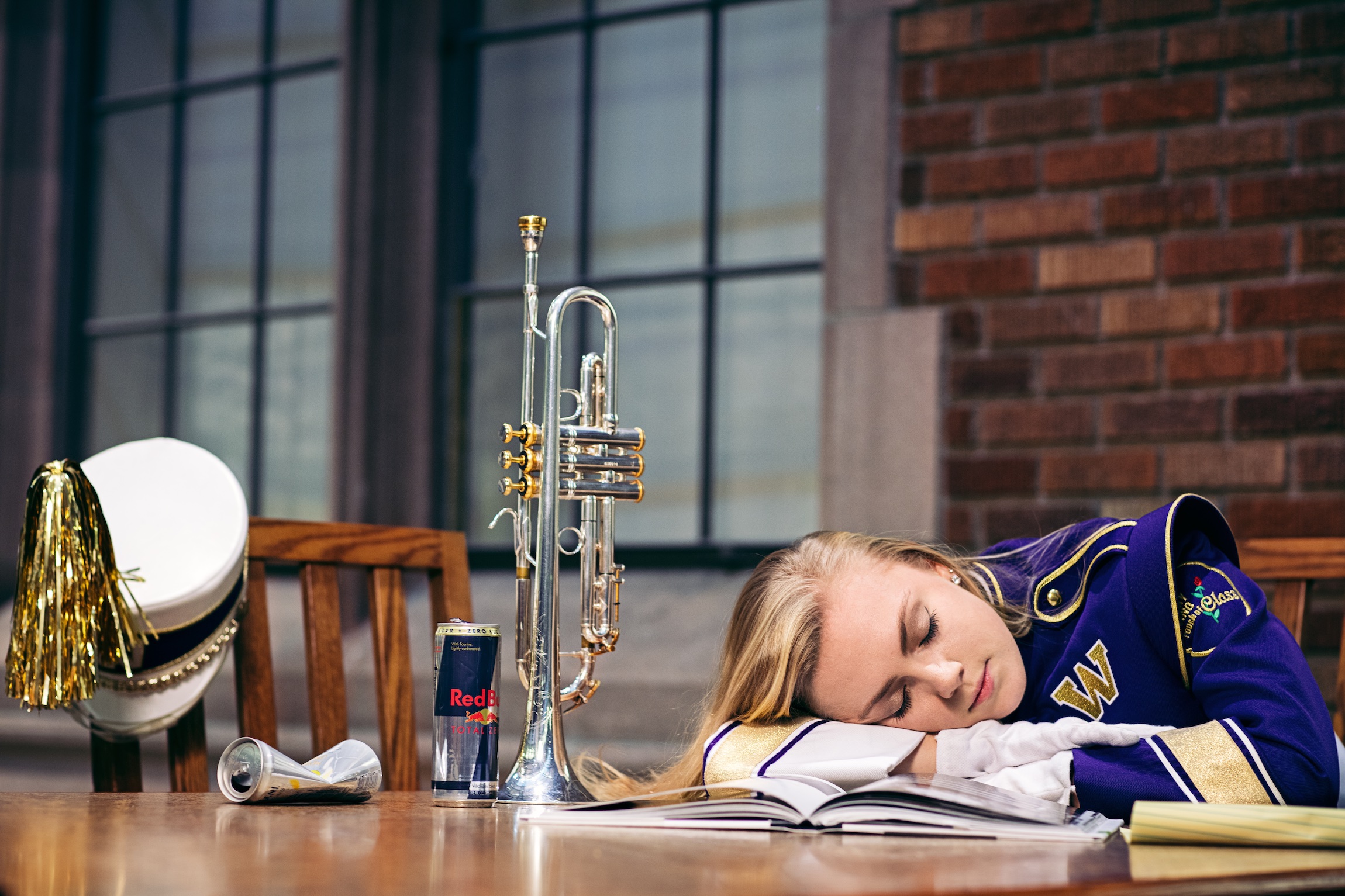 “I applied to 13 other colleges. Most of them were for track. I did 100-meter hurdles, 300-meter hurdles, pole vault, and 4×400-meter relay. Then I hurt my back my senior year of high school.

My dad, uncle and grandpa went to the UW. I thought, ‘Well, that’s kind of cool to have a family train.’

When I actually got accepted, my family was the happiest we’ve ever been. We were hugging. That was, like, our star moment.” 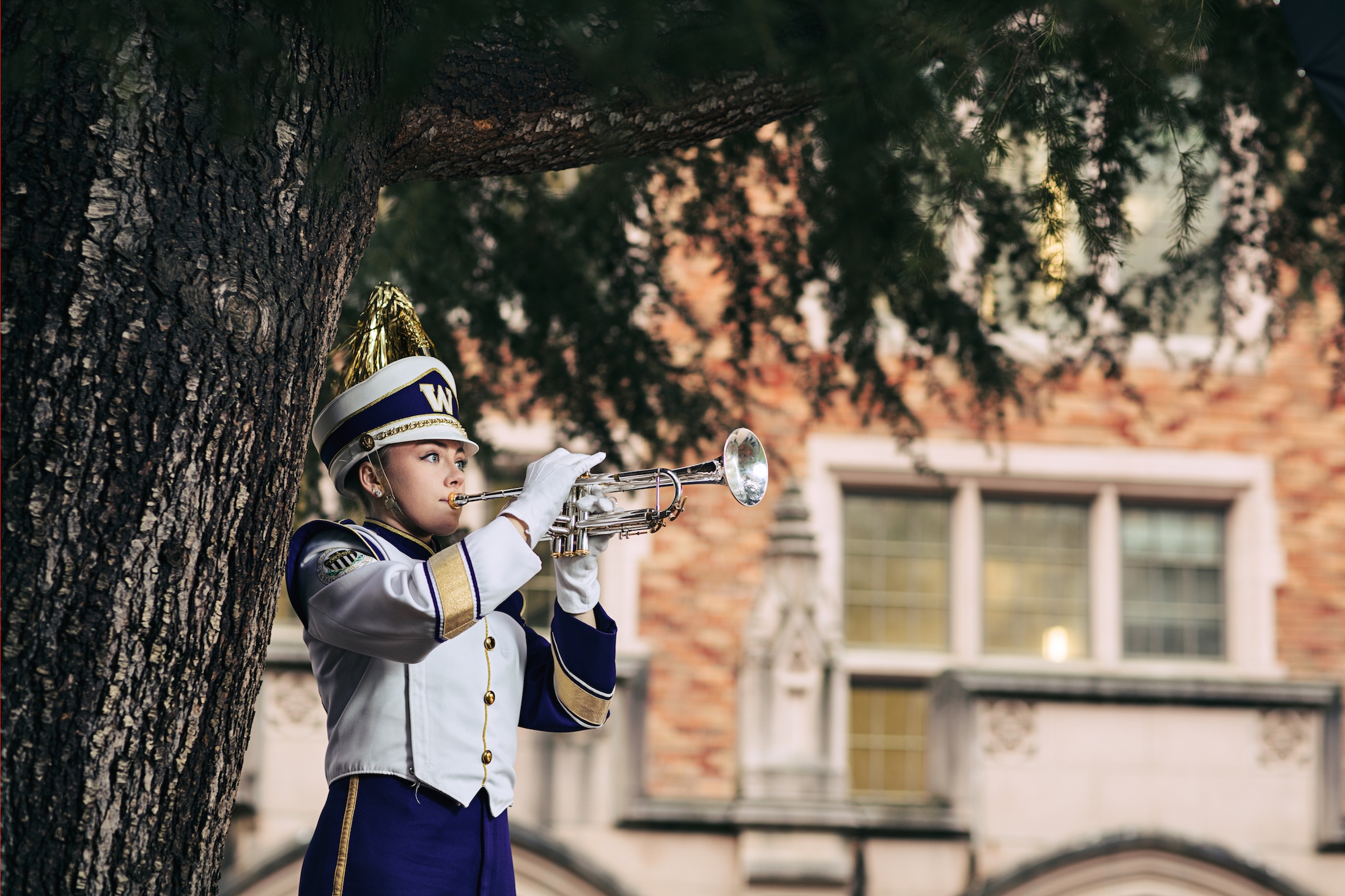 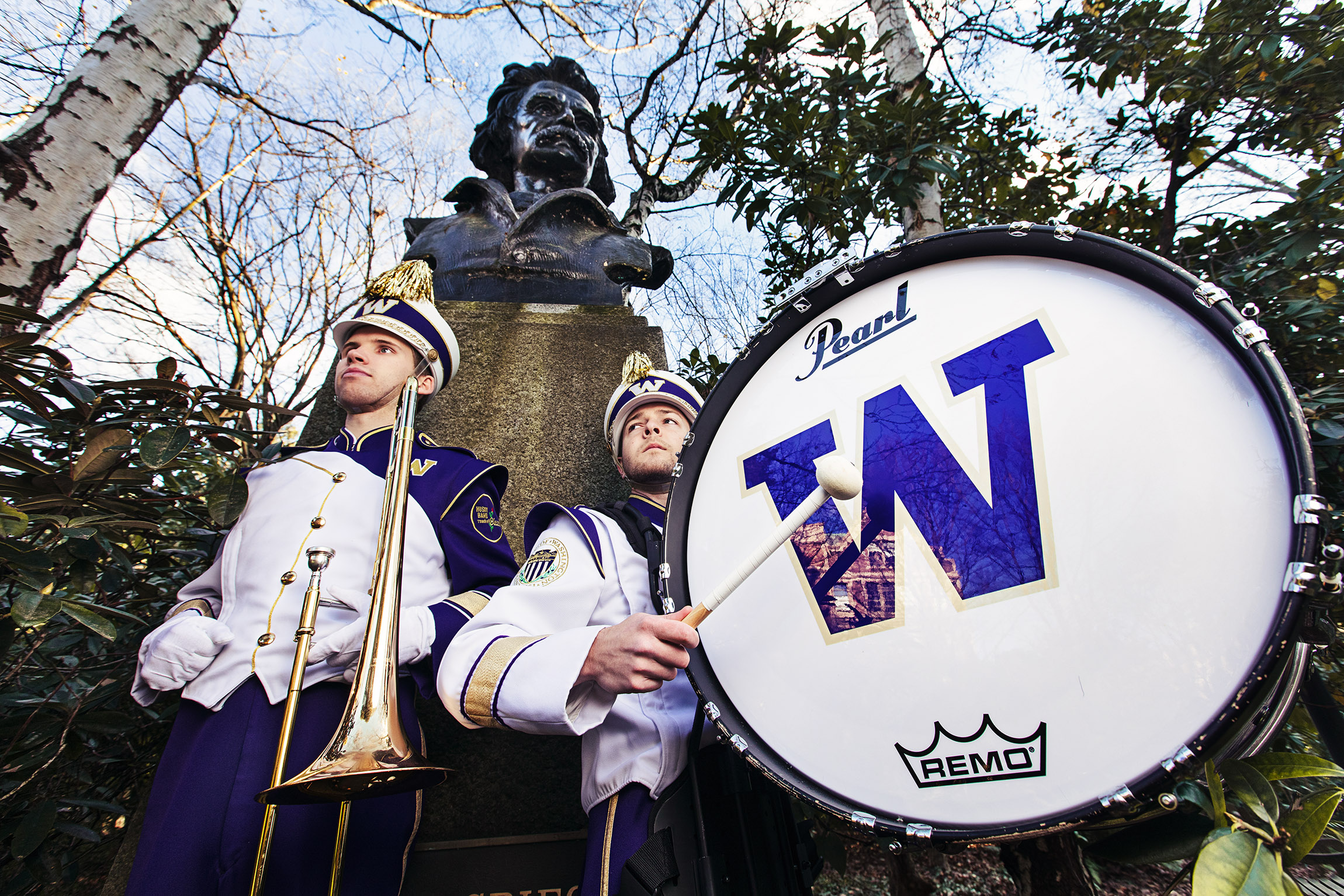 Carter: “Adam was one of the first people I met in the marching band. When you first start, you do a drills week. It’s basically band camp for 12 hours a day. They put us in a room together at the Travelodge down by U Village.”

Adam: “We both kind of just stuck around for four years. I’ve spent more time on a plane in the last 18 months than I have in my entire life. I even went to Ireland to march in the St. Patrick’s Day parade in Dublin.”

Carter: “Trombone was not my first choice. In sixth grade, the band director said, ‘Hey, we don’t have enough trombones. You’re tall. Wanna do it?’ But at first I was too short to empty my spit valve with my arm, so I had to use my foot. It’s not a glamorous sport.”

Adam: “Yeah, sometimes I bang my finger against the rim of the drum and start bleeding a bit. Drummers can’t wear gloves. It doesn’t feel great, especially when it’s 30 degrees outside.”