In 1970, students made their point by blocking I-5

When eight protestors blocked the 520 bridge on Feb. 18 to oppose the upcoming war against Iraq, they stopped traffic for 30 minutes, prompted state senators to write a bill making such acts a felony (later it was changed to a misdemeanor), and carried on a tradition that started 33 years ago during the Vietnam War.

On May 5, 1970 — the day after four students were killed by National Guardsmen at Kent State University in Ohio — a march from the UW employed a new tactic never tried before in the nation: blocking a freeway.

“People will tell you that it was planned in advance, but I don’t believe it,” says Seattle historian Walt Crowley. “I was close to the leadership that morning and no one was talking about taking over the freeway.”

“It was the most spontaneous thing I’ve ever seen,” adds Stephanie Coontz, then a student leader and now a professor at Evergreen State College. “No one group could take credit.”

The day was balmy but the mood was grim following the news of the deaths in Ohio. About 7,000 students gathered in front of the HUB that morning with ASUW President-Elect Rick Silverman presiding. In a series of votes about tactics, the crowd decided to hold a “noisy but non-violent” march. There was no mention of a specific destination. 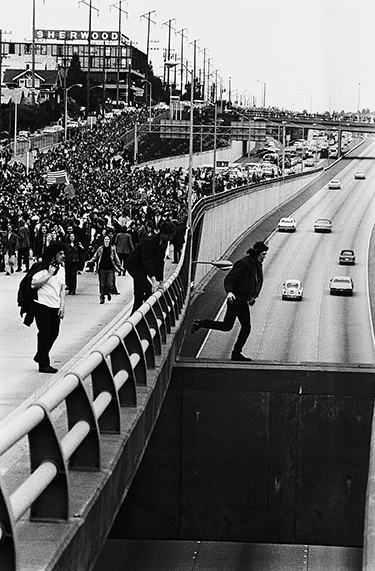 The crowd first confronted UW President Charles Odegaard with a list of demands that included abolishing ROTC and banning the National Guard from campus. While Odegaard spoke at length — communication was difficult due to a malfunctioning bullhorn — he did not agree to their demands.

When the marchers arrived at the corner of N.E. 45th Street and University Way N.E., a splinter group urged the crowd “to the freeway,” according to Crowley. Once the marchers crossed the 45th Street overpass, “a forward contingent said, ‘On the freeway,’ and they went down the ramp,” Crowley recalls. “They sneaked up on the traffic, kind of like merging left, and there they were.”

“It was spontaneous,” adds Seattle Times Columnist Erik Lacitis, who was a reporter for the Daily and witnessed the march. “There was just a bunch of kids yelling, ‘Freeway,’ and we followed them.”

“I was urging people, ‘No, keep on the streets. Keep it legal,’” recalls Coontz, who was afraid the media would label the protestors “provocateurs and lawbreakers.” “But it was clear it was going to happen anyway,” she adds, “so I went too.”

For a while all lanes of the freeway were blocked by at least 3,000 protestors. Some students danced on the pavement while others sat down. According to press reports, some motorists honked their horns in support while others made obscene gestures. The mood was festive, says Lacitis. “It was such a nice day. It was a demonstration but it was edging into something else, kind of like a be-in,” he recalls.

About 30 helmeted Seattle police officers faced the marchers near the Roanoke Street exit. For a while, the students staged a sit-down strike blocking the southbound lanes. “The cops were totally freaked,” recalls Crowley. “I will never forget it,” adds Coontz. “They looked terrifying to us. Then I could see that one of the policemen couldn’t stop his legs from shaking.”

Silverman scrambled atop a beat-up VW and presented the crowd with three choices: continue the sit-down strike, go back to the University or continue on to the federal courthouse. Eventually the crowd left the freeway peacefully at Roanoke Street and marched to the courthouse. There were no arrests, no tear gas and no use of police batons.

The next day was different. After a downtown rally at the courthouse, some protestors tried to block I-5 and were met with tear gas and arrests. A final freeway march that weekend had the blessing of the Seattle Mayor Wes Uhlman — officials closed the I-5 express lanes so that protestors could peacefully make their way from the courthouse to campus.

The May 5 demonstration was the first freeway march in the country, says historian Crowley, who researched 1960s protests for his book, Rites of Passage. “It was a nifty tactic. Suddenly there were freeway marches everywhere,” he notes.

The tactic is still in vogue today. Over the last decade, marchers have blocked freeways in St. Louis to protest the lack of jobs for minorities, in Paris to support an airline strike and in Melbourne, Australia, to protest pollution.

Although he was there at the beginning, Crowley is not sure blocking a freeway is effective. “To what degree do you want to inconvenience the people who you are trying to influence?” he asks. “It can be a two-edged sword.” Yet the memory of that day still lingers for those who participated. “They were exciting times,” says Lacitis. “You felt that you were watching history in the making.”