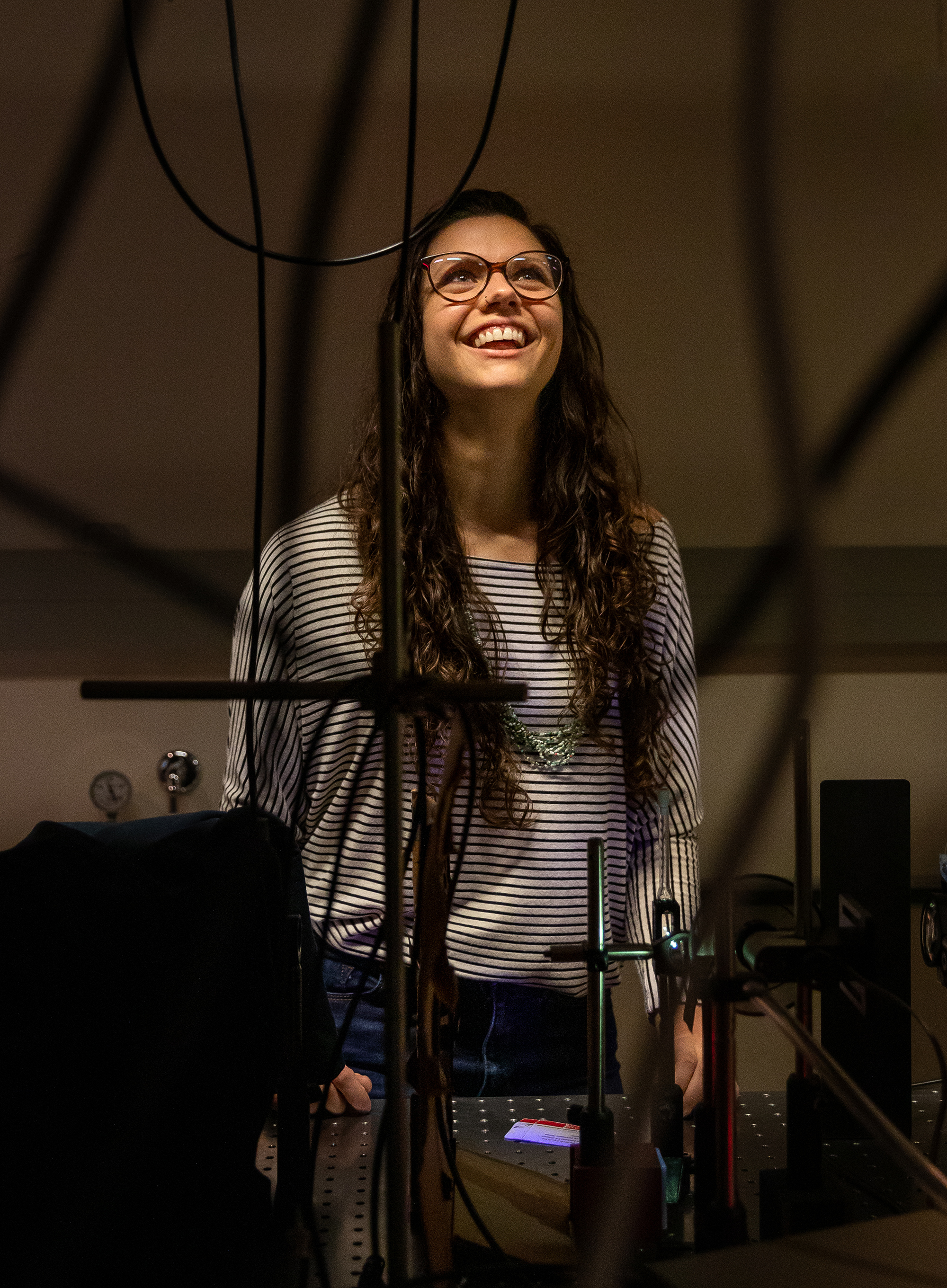 Emily Rabe loves a challenge. Thanks to two graduate fellowships,
the chemistry Ph.D. student is working to piece together a way
to harness the power of clean solar energy.

Emily Rabe loves puzzles. In high school, she and her best friend happily spent Friday nights with jigsaw puzzles and  ice cream. Rabe’s father built her a custom puzzle board to  take to college in Minnesota, and she brought it to Seattle as a UW graduate student. Now, through her chemistry research, Rabe is immersed in a puzzle with higher stakes—one that could have a significant impact on our planet’s health.

A fifth-year doctoral student in the UW Department of Chemistry, Rabe works in Cody Schlenker’s chemistry lab, where she can further her interest in clean energy. (Schlenker is the Washington Research Foundation Innovation Assistant Professor in Chemistry and Clean Energy.)

“Instead of a thousand tangible puzzle pieces, I have hundreds of data files, dozens of journal articles and a few scattered textbooks,” says Rabe, who studies sunlight as a clean-energy source. “But still, I start by making small connections, and piece by piece I get to build up the picture.”

“People in the lab were just so excited to be doing science, it almost didn’t seem like work.”

The picture she’s helping piece together is an important one: how to harness solar energy without using expensive or toxic materials. One focus of Rabe’s work is the use of hydrogen molecules for fuel. The idea isn’t new—there are hydrogen cars on the road—but currently 98% of the hydrogen used for fuel is produced using methane or natural gas, releasing carbon dioxide in the process. Rabe and other researchers are exploring a cleaner approach, using energy from sunlight to generate hydrogen molecules from water.

Collaboration is another reason Rabe chose to work in the Schlenker lab; she loved its sense of camaraderie. “People in the lab were just so excited to be doing science, it almost didn’t seem like work,” she says. “It was a really great atmosphere.”

Though Rabe conducts most of her research in the Schlenker lab, she also has access to the resources of the UW’s Clean Energy Institute (CEI) as a CEI graduate fellow. “As part of the fellowship program, we go to seminars that are not always on chemistry or solar energy,” says Rabe. “They might be about how we manage the grid, or how to make batteries that last longer. That kind of breadth has helped frame and motivate my research. It lets me see what’s actually useful in the bigger picture.”

Before being named a CEI graduate fellow, Rabe received the Paul H. and Karen S. Gudiksen Endowed Fellowship in Chemistry, awarded to encourage a promising applicant to study at the UW. For Rabe, the award did more than provide financial support. As a graduate of a small liberal-arts college, she had less research experience than other applicants and wondered if she belonged at the UW. “The fact that the department not only accepted me but offered me this fellowship helped me feel like I did belong here,” she says. “It helped fight impostor syndrome.”

After deferring her enrollment to work at Argonne National Laboratory, Rabe arrived at the UW and quickly proved that she was anything but an impostor. She joined fellow graduate student Nick Montoni to create the Mentorship Network, which matches incoming chemistry graduate students with current ones so that the new students can ask questions long before they arrive. (Montoni has since earned his Ph.D.) Rabe also serves as co-president of Inclusion in Chemical Sciences at UW (InCS), a graduate student group that builds community and skills through workshops, guest speakers, science outreach to K–12 schools and more.

The Department of Chemistry funds InCS, which in turn funds the Mentorship Network. Rabe believes that the department’s support of such programs has had a meaningful impact on her graduate student experience.

“In our department, we really have a strong sense of community,” she says. “Graduate school is going to be hard no matter where you go, but here it feels like there’s a group of people who will celebrate with you when things go well and grab a consolation beer when they don’t.”

They might help piece together the big picture of developing cleaner energy, and they might also help with a jigsaw puzzle.